You Brits are a Pessimistic Bunch

To an American ear, the British have a peculiar pessimism about their sports. We usually become aware of this largely through Wimbledon, but it infects their outlook toward nearly every event -- including the London Olympics. In a word, the Brits are terrified. They're dreading their close-up. They're sure they're going to somehow drop their trousers with the whole world watching and bollix this up. But why?

As Sue Mott of the Daily Telegraph described it one year I happened to be covering Wimbledon, in a column about homegrown British tennis players: "No one starts with the score at nil-nil. Psychologically, they are one down already. They play in a trench of old bones, sore defeats and diabolical performances from which it is wretchedly hard to excavate themselves."

[+] Enlarge
Carl Court/AFP/Getty Images
Rapier missiles are among the security measures for these Olympics.
Geezus. Can we lighten up? Is it too late to move this rodeo to Sydney? Or at least get a good thesaurus.

Whatever happened to looking forward to an international pageant of sports featuring the world's irrepressible youth? Huh?

"We have, collectively, osmotically, decided that we hate the Olympics. It's costing too much, it's causing an enormous amount of trouble and inconvenience, it's bound to put up prices, make it impossible to find a taxi, but most of all, one thing this city doesn't need is more gawping, milling, incontinently happy tourists," acerbic London-based critic A.A. Gill wrote for The New York Times in April.

"We will be pleased when all the fuss and nosiness has gone away."

A lot has changed since Gill wrote those words. But not in any of the respects just mentioned.

Opening ceremonies arrive Friday night, and Londoners are worried that their aging Tube system won't be able to handle the extra passenger traffic and that England's notoriously dismal, rainy climate won't cooperate for the next three weeks (most grievously at beach volleyball, where some women athletes have warned they may forgo competing in their usual bikinis). Ladbrokes, one of the country's many betting parlors, has been laying odds for weeks on whether zany London mayor Boris Johnson, who likes to ride his bicycle to official events, would set his mop of white hair on fire during the official torch relay.

Terrorism is such a concern, there are literally missiles mounted on London rooftops and warships moored in and outside the city. The Brits are also behaving as if they aren't quite sure that movie director Danny Boyle, who is most famous for "Trainspotting" (a film about heroin addicts) and "Slumdog Millionaire" (the Oscar-winning tale about some of India's wretchedly poor), can be trusted to hold up a flattering mirror to their country.

An unprecedented amount of detail has already leaked out about this year's production -- the Shakespeare bit remains in, but Boyle cut the motorcycle stuntmen, and Paul McCartney handles the big sing-along finish -- which has been a source of frustration for Lord Sebastian Coe, Britain's former middle-distance star who's now head of the London Olympic Games organizing committee. He tweeted on Monday: "#savethesurprise."

But if a complaint falls in Sherwood Forest or Radcliffeshire/Worchestersauce/Offal-by-the-Thames and nobody listens, was it ever really made at all? Plenty of Brits suspect that any day now, for example, the rest of world will also be reminded of something they began caterwauling about the moment London's official Olympic mascots Wenlock and Mandeville were introduced back in 2010. Wenlock, especially, has sparked a squall of observations that he looks quite like, well  a bit of a dead ringer for, um

Better let Mark Ritson, who actually covered the unveiling for Marketing Week, handle this: "As a voiceover explained that the figure with the helmet-like head, single eye and dual appendages around his base was Wenlock, I was struck with a single, horrifying realisation: yes, but he looks like a penis."

[+] Enlarge
Andrew Cowie/AFP/GettyImages
No jokes about Wenlock here. Those are in the column.
God Save the Queen!

"Why this?" one tweeter wailed.

"Because nothing says 'Britain' like a creepy bipedal showerhead/penis thing with lobster claws," another answered.

As you might expect, this has conjured up a lot of natural follow-up jokes ("Say, Mister. Is that the Loch Ness Monster in your warm-up pants, or are you just happy to see me?"  "Wait. Bangers [and] mash is a food dish? Whew! I thought you could get fingerprinted for that!") The off-color snickering has only intensified since American soccer goalkeeper Hope Solo gave an interview about sex in the Olympic village (the CliffsNotes version: Whoa, there's a lot!) and others have noted that 100,000 condoms, or nearly 10 for every athlete scheduled to compete, will be made available.

Perhaps it's helpful to point out here that the Brits' fears of embarrassment or chaos are not unique.

Remember the worries that Beijing's smog was so noxious it might actually cause the 2008 Games' marathon runners to gag? It didn't happen. The 2004 Athens Games were beset by reports that concrete was still drying at some of the venues when the world began to show up. Things went fine. Triathletes in 2000 Sydney Olympics thrashed around during the swimming leg of their competition knowing that highly trained scuba divers were lurking somewhere in the water just below them, armed with weapons just in case a shark decided to show up in the harbor for a little amuse-bouche that was not on the official schedule. No one was harpooned, far as we know.

What makes the Brits' fatalism feel different is that it's so unrelenting. And the way they express it is so literate and emotionally over the top. In England, something isn't merely good or bad, it's terribly lovely, massively impressive, a humiliating shambles! This is the home of Shakespeare and Oscar Wilde, remember. Sarcasm blooms everywhere. Even the lowest of London's lowbrow daily newspaper tabloids is full of vivid writers who excel at putting new psychic wounds into historical contexts that stretch back years, even centuries. And most of it is spurred along by one of the few things the Brits actually will brag their sportsmen are good at: losing.

Similarly, one of the few boasts Londoners will make about themselves is that the fussy, emotionally shuttered reputation they have among the rest of the world is extraordinarily well deserved, now, isn't it? It isn't just outsiders who are parachuting down and observing how London and the Olympic Games are, in the words of Der Spiegel's Marco Evers, "clearly not made for each other." Londoners are making similar confessions.

[+] Enlarge
Thomas Coex/AFP/GettyImages
The British probably will never escape their head games, but plenty of competition will provide an alternative.
Gill again: "We're not a good time to be had by all, we're not an easy date. London isn't a party animal by nature, it doesn't join in or have a favorite karaoke song. It does, though, have a wicked, dry and often cruel sense of humor.  Londoners are just permanently petulant, irritated. I think we wake up taking offense. All those English teacup manners, the exaggerated please and thank yous, are really the muzzle we put on our short tempers. There are, for instance, a dozen inflections of the word sorry. Only one of them means 'I'm sorry.'"

How can you not watch an Olympics being hosted in a place like this, or root for a little harmless snafu, just to see the reaction?

Great Britain is forecast to finish as high as third or fourth in the medal race, perhaps outdoing Russia. You would think that would be enough to put a serious dent in their gloom. Except they are British. And they have been at this for a very long time.

At the first sign of an Olympic wobble, Brits are likely to get back in the time machine and exhume memories of some other mortifying trench of diabolical performances and old bleached bones like the '96 Atlanta Summer Olympics, where Brits won only one gold medal -- or two fewer than Kazakhstan.

"A nation of goat-keepers and shepherds last night humiliated the might of Great Britain's Olympic team," screeched the Daily Mirror tabloid, in a tone not unlike this unforgettable headline that the stately old Times of London dropped like a boulder on Tim Henman's head one year, before his annual torture at Wimbledon had even begun: "Why Ever Did We Think He Could Do It?"

The British are hoping for the best Olympics. And expecting the worst.
Click to expand...

Stopped reading after the first paragraph. Sounded quite down-beat.

I just read that in a Sean Connery voice in my head.

Kind of, but it's more about the British's constant pessimism about hosting major events and having the whole world watching them. It's never a level playing field when the british are involved. It's always an uphill battle for them.

They're bitching about all the tourists coming to spend money?

Meanwhile, at the Olympic pool...

dazzypig said:
I just read that in a Sean Connery voice in my head.

Glad I wasn't drinking my Vodka Martini when I read that.

Maybe we should invent a sport and then hold a "World Series" that only we play in.

12watt said:
Maybe we should invent a sport and then hold a "World Series" that only we play in.

Uh, Toronto has won it, and Montreal used to be in the league....DUH!

It must be Friday. 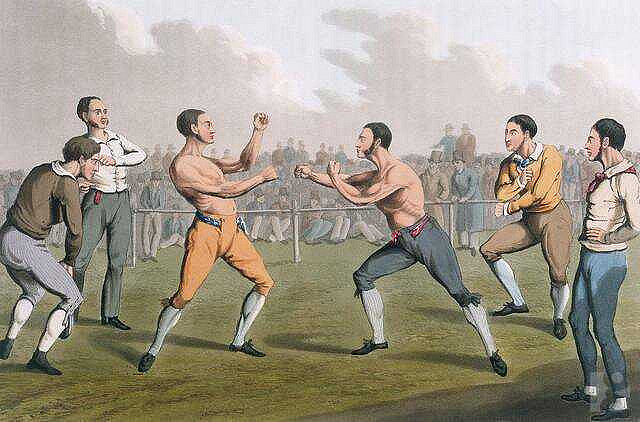 You see, that's why we don't get excited about stuff.

Snatching defeat from the jaws of victory...

12watt said:
Maybe we should invent a sport and then hold a "World Series" that only we play in.

When another country can step up and rival the Champs in the MLB, we will talk. The best league after the MLB is the Japanese league, and their all stars barely hang with the AAA team (The league that has their best players promoted to the MLB).

We're crap at sports, celebrate losing (it's all about taking part..!) and use reality TV to make people feel better about themselves..... Chavtastic...!!!

If you had more criminals armed with guns, those pesky tourists would be right afraid to get near you.

Wait, we sort of do the samething with our politicians so I humbly retract

Sinmastah said:
When another country can step up and rival the Champs in the MLB, we will talk. The best league after the MLB is the Japanese league, and their all stars barely hang with the AAA team (The league that has their best players promoted to the MLB).
Click to expand...

Humour delivery for a Mr Sinmastah!

This joke is getting stale.

Thumpalumpacus said:
If you had more criminals armed with guns, those pesky tourists would be right afraid to get near you.
Click to expand...

You obviously ain't been to East London.
You must log in or register to reply here.