Will hanging a guitar by its headstock damage it?

Fret Hopper said:
TXOldRedRocker,
You have some beautiful guitars! I don't have anything by comparison.

Are the hangers adjustable - in that they can be turned to face straight ahead, or left/right?

Yes they are adjustable. The ones I buy have two pivot points, so very adjustable.

CB91710 said:
No.
The only issue is discoloration/wear of the finish.

Strings apply over 100lbs of tension to the neck.
Hanging it by the headstock reduces this by no more than 10 pounds.
Click to expand...

The only detail I would add is to make sure your room has the right humidity level. This is assuming that you would normally keep a humidifier inside the case. The most vulnerable guitars are acoustics, but even electric guitars can have issues.

I always keep some guitars hanging and some in cases. And I run humidifiers 24/7 during the heating season, as I also have two pianos. And I also have hygrometers to monitor the humidity.

I don't know if it will or it won't but my thinking is this: guitars were never designed or built to be hung on hooks, therefore I will keep mine in its case or on a stand.

DaveSG said:
For four years! That guitar needs some love! Here's hoping they give you a great deal on it. If it has been there 4 years and finally has a buyer, I would expect them to want to sell that guitar bad.

There is a concept that if a guitar has been hanging out that long, it must be a bad guitar. Not so. I've heard some cool stories that point to the contrary.

One story I recently read (on MLP) had to do with a LP that was hanging up on the top rack for a long time, because it never stood out. But the lighting was also bad, and when he brought it down, it turned out it was really flamey. The angle gave the illusion of a plain top.
I had read somewhere else in another story that a guitar had been hanging on the upper racks for years, and finally someone asked to see it (because it was a plain jane R0/G0 I think), and nobody had ever asked to see it because it was just a homely looking guitar, but it turned out it was phenomenal. Then one of the guitar store guys said 'that is the best guitar in the entire store, but everyone passes it by'. Sometimes there are duds, but other times just the treasure waiting to be found. I hope it is the latter for the OP!
Click to expand...

I recently saw a Martin D-35 for sale on Reverb. It was NOS. I inquired, thinking it would be somewhere between 2017-2020. Nope. It was supposedly a 2003 model. The music shop "claimed" it had just been sitting in their warehouse, in its case and had never been touched.

Whether it was or wasn't, I'm not taking my chances on an eighteen-year-old "new" guitar. I don't care the reasoning. Something's just downright suspicious about that.

I once worked on a Les Paul Supreme that had fallen off a GC wall hanger. Broken headstock. The guy who bought it was extremely happy. Got a Les Paul Supreme for $1500 OTD. Very playable. The smile line was just barely visible. I wasn't going to try and hide the break. Tuned and intonated great. If it was sitting in a case. It never would've been sold.
Then again, it never would've fell and broke either.
If I had a bunch of guitars I was trying to sell I'd have them hanging where people could see them.

Nintari said:
I don't know if it will or it won't but my thinking is this: guitars were never designed or built to be hung on hooks, therefore I will keep mine in its case or on a stand.
Click to expand...

They're not 'designed' around a stand or a case (or any other way you want to place it down) either.
The only 'design' aspect is about their shape and the other ergonomic aspects. They are made with strong enough materials to easily withstand string tension....plus any weight that might occur from laying the guitar down anyway you choose to.
S

Robmosis said:
Slow your roll turbo, this has been covered extensively in this forum, There’s a ton of info. My post was meant as a gentle suggestion to search for the desired info before starting another tired subject that’s been beat to death.
Have a nap and a sandwich
Click to expand...

Good suggestion - I was just about to start a thread: Les Paul - pick guard on or off?

Despite the ridicule that has been spewed forth lol!! I actually want to know. I have all my “cheaper” guitars on cheap Amazon hangers! However, I’ve been afraid to put my Gibson’s on them as I bump the tips of the heads on my epiphones when I put them back. I could see my dumbass breaking a headstock! There was a hanger I found on Amazon that held like 6-8 guitars at kind of a 45 degree angle fatter off the wall that I think would be perfect for me and my setup so I wouldn’t smack the guitar around when hanging. But I was worried about the nitro finish being more fragile than the China cockroach lacquer on my Epiphones

Gibsons have nitro finishes.
Stick with Hercules products and avoid any generic Amazon stands or hangers... the rubber will stain the finish.

Even with Hercules, some prefer to put a microfiber cloth between the guitar and stand.

It's not an issue with Epiphones or other guitars with a poly finish.

ARandall said:
They're not 'designed' around a stand or a case (or any other way you want to place it down) either.
The only 'design' aspect is about their shape and the other ergonomic aspects. They are made with strong enough materials to easily withstand string tension....plus any weight that might occur from laying the guitar down anyway you choose to.
Click to expand...

Um, pretty sure they're designed to be put in a case lol.

The case might be designed to fit the shape of the guitar.....but the guitar itself is in no way designed around sitting in a case....LOL

Yup, designed to be played.
So if you want to hang it. Hang it around your neck. And play it.

dro said:
Yup, designed to be played.
So if you want to hang it. Hang it around your neck. And play it.
Click to expand...

Hang it wherever you like, I say! I did this for six years before getting moved to a smaller corner of the house and I miss the setup. It was that much easier to rotate guitars during practice, and it looked damn cool.

These and another dozen have been hanging by their necks for as long as 25 years now at my home in Florida. 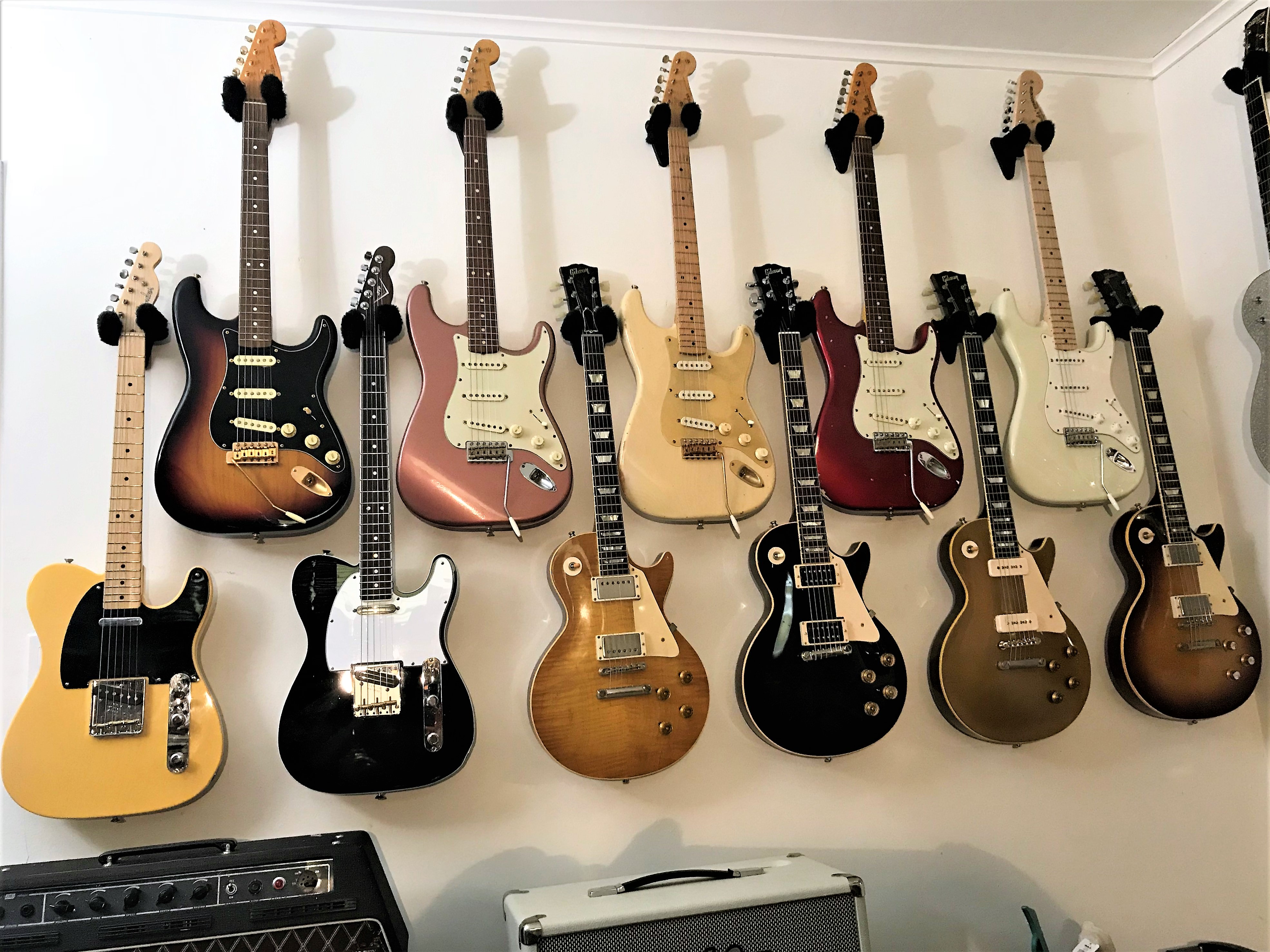 I use Off The Wall hangars with fuzzy fabric hanger bras. They all use the manufacturer included mounting hardware. Some are mounted to studs but most are just supported by the (3) anchors in drywall. None have ever fallen, developed neck issues or developed hanger burn. They have survived hurricanes, oppressive heat and humidity, plenty of morning sunshine, dust and anything else you could imagine being outside of a case. The only time they ever see the inside of a case is when they are being transported to gigs and they all get gigged often and always perform as expected.

Hanging by the neck is perfectly safe for your guitars if you just use common sense.

Can we now get back to important topics to worry about like will installing different screws on strap locks devalue my Les Paul or why would anyone want to pay for a reliced guitar or what pedal do I need to fix my tone?

Brazilnut said:
I'm here to tell ya, if you want to start a fight on this forum, just make a pronouncement for or against hanging your Lester on the wall.

Hey, if people didn't ask questions that have already been answered we would have nothing to talk about except new models!

Nintari said:
Um, pretty sure they're designed to be put in a case lol.
Click to expand...

Nope, the case is designed to protect the guitar, it's a small but very important distinction.

I love it when they make it easy.
Click to expand...