Why do I hate strats? And do I need therapy?

redking said:
Traditional 3 single coil strats need to be played with the right amp and pedals because strat pickups are so weak. If you play a strat through the wrong rig, you get nothing from it and that is very dissatisfying. That is why the great strat players we can all think of are also known for something else gear-wise: either a fuzz pedal or tube screamer (or klon) type pedal. If you ever have the chance to sit down with both a strat and tele at the same time, plug them straight into any amp and play each on the bridge pickup - I'm betting you will be able to get something satisfying from the tele and the strat will be something less than what you get from the tele.
Click to expand...

Ok, now this makes sense to me. And is probably why strats and massive pedal collections seem to go together. Lol.
I’m more of a very few pedals kind of guy.

You don’t need therapy! I never found a Strat I wanted to play until an adult daughter got me a used HSS partscaster at a garage sale Father’s Day 12 years ago. I really bonded with that one, and even gigged with it. Even now, any Strat but that one is a no go.

I'm with you on "Classic" strat pickup configurations.

But once I got a Strat style guitar with a humbucker in the bridge, then it made all the difference in the world

Now I have 3 of these and they are my FAVORITE Strat style guitars, 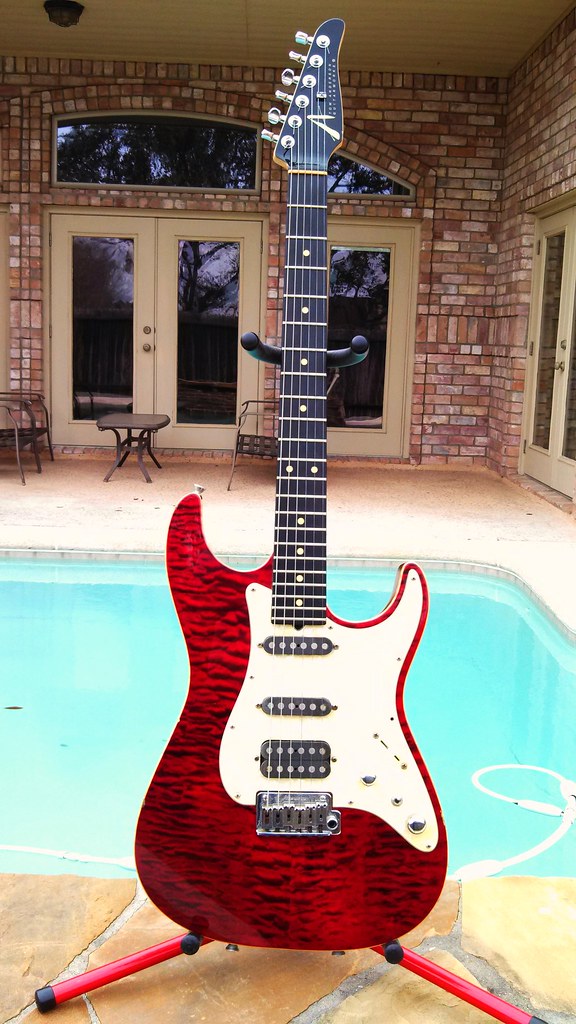 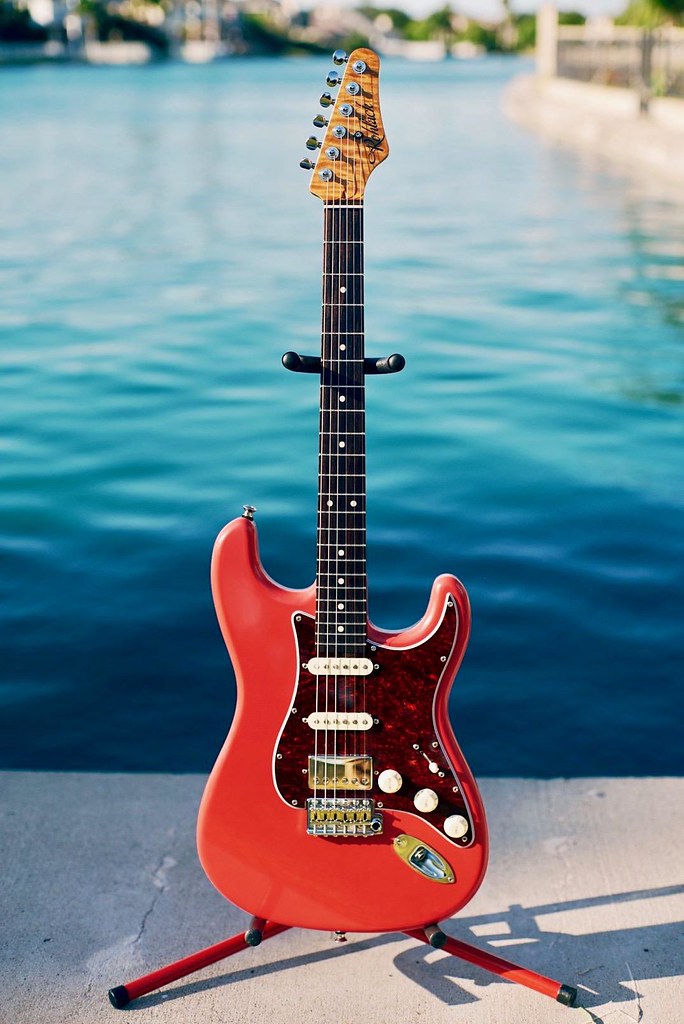 ^This is about as good as it gets, strat-wise.

Ed King played the intro to Sweet Home Alabama (and the rest) on a Strat. So there's that. Nuff said.
E

That Otis rush is pretty killer!

All of those fifties cuts for Willie Dixon/Cobra are fantastic.

I find them difficult to bond with. Need to have a chunky neck and pickups that aren't ear-piercing in the high end, particularly the bridge. I've flipped a good number of very nice Strats because they were too... well... Stratty.

It's silly to say that great music hasn't been made on them, though. How about Billy Gibbons on La Grange? SRV, Rory Gallagher, Allan Holdsworth, George Harrison - lots of amazing tone in those guitars.

I don't really care for this guy's music, but it's hard to argue that he doesn't make this guitar sound pretty damn good:

I absolutely groove with the theme of this thread. Strats have always been a disappointment for me to play, but I've admired the heck out of how a lot of others play them on a regular basis, not just Jimi. And IMO, Strat contoured bodies are probably the most comfortable design to play. It's the overall feel and tone of the pickups that I've had to work on.

I've recently realized that I have to approach a Strat differently than I do my 2 humbucker guitars - which are my wheelhouse. On my HB guitars I pretty much live on my bridge pickup or middle position. It's instinctive. But when I've done this on a Strat through the years I just get that thin, ice-picky tone that sucks.

IMO, and contrary to the original design of the guitar, the bridge pickup on a Strat is primarily there to provide the #2 notch tone and rarely to be used on its own.

At the same time, instead of living on the bridge bridge pickup like I do with HBs, with a Strat I need to live on the neck and #4 position, using other positions to flavor the tone as needed.

As was mentioned earlier, setting up the amp for a Strat or having the right amp is also important. I've seen plenty of people using Strats with high gain and don't quite know how they manage that. IMO, Strats sound best with low to medium gain with the pickup positions listed above.

With all of this, I've learned to bond with Strats more - even see what they can do that my favorite HB guitars can't do as well.

But it's taken me decades.

Mind you, I currently don't own a 'traditional' Strat, i.e. straight SSS. I have two actual Strats, one with 3 P90s, 1 that is a custom, more like an Ibanez, that is SSH, but has ability to have PUP combinations not available on a strat, and the other a Fender Deluxe Roadhouse Strat. THe latter IS a SSS, with noiseless pups. But why I love it's tone, is the internal preamp it has that makes the typical strat, single coil tone, different degrees of 'fatter', Preamp off, typical Strat Single Coil tone (well for some purists, because of the Noiseless pups, not even then). Preamp on, settings go from adding just enough to that noisless tone, to sound like a Single Coil, with a slight clear/treblee boost, up to an almost P90 growl, to last, a fairly fat, almost HB area. I almost never use it with 'normal' strat tone.

I also have a set neck strat like body with HH. And my Variax JTV-59 LP body that models strat, (and tele and a whole bunch)

So the point is, I don't have a strat that does traditional Strat tones, or the one that does, I don't use it. Even on the Variax, I don't use the straight strat emulation. I'll combine pups (because you can).

So I get where the OP is coming from.

Form factor aside, seems OP is more focused on the tone aspect. And, from above, you could infer I feel the same way about the tone of a Strat. Because, I definitely do find a strat form factor very comfy to play, with the right neck.

But as pointed out by others, I eventually found that that 'strat' tone, is better suited for different amps and signal chains. In fact, in many regards, it's the perfect starting tone to craft and modify from.

I mostly came to this epiphany, afer switching to profilers and modellers, where I had access to 100s of different amps, pedals and effects.

I will also say, the traditional Strat tone, because of the above, is much more tonally versatile than the typical HH solid body. Granted that is via pedals, etc. But it is, because of it's starting point. That is why you can see strats played in a larger range of musical genres.

That doesn't mean it's the best choice in all of those. More of a Jack of many trades, Master of a few. Because, there are a few genres, tone profiles, that the strat is just better at, than anything else. Granted, that might not be your cup of tea.

I will also say, most HB players, likely don't know how to dial in an amp for a Strat either.

YOu may not hink Eric Johnson's lead tone is 'fat' enough, but it sure sounds good to me (Particularly after the intro.

Texsunburst59 said:
I with you on "Classic" strat pickup configurations.

But once I got a Strat style guitar with a humbucker in the bridge, then it made all the difference in the world

Now I have 3 of these and they are my FAVORITE Strat style guitars,

Yep, once you go "super strat" with a humbucker in the bridge it becomes a different instrument and it gets along better with a variety of pedal and amp combinations than the S-S-S.

It's probably worth throwing Dick Dale into the discussion.

redking said:
Yep, once you go "super strat" with a humbucker in the bridge it becomes a different instrument and it gets along better with a variety of pedal and amp combinations than the S-S-S.
Click to expand...

I don't think I saw Beck, Clapton or Hendrix mentioned once?

I think they sound good when other people play them. I bought(and sold) one just recently. I learned on a guitar with humbuckers, so single coils always sound thin to me. They sound great on Hendrix and SRV albums though. I LOVE the way telecasters look but none I have ever played have fit me.

I hate Strats too. Real guitarists sound great playing them but I've owned three USA models and could never get the tone I want. I do have three super strats I do love though. Two Charvels and a Ibanez S.

I also replaced the body on my '81 Strat with a brand new Basswood Warmoth body and had it relic'd. I fucking love this thing. Ironically, the guitar I chose for my daughter to be perfect for her to cover as much ground as possible with one guitar is an HSS configuration.
Z

Two words for you: Ritchie and Blackmore.

el84ster said:
This is inspired by another thread but maybe someone can fill me in on what I’m missing.
jimi is the only guy I’ve ever heard make a stray sound really great. To me they’re always thin, bland and too sproingy.

Now I’ve been playing for over 30 years, went to Berklee, played live a ton and manage a studio, so I’ve had plenty of exposure to strats

If something is that popular but I don’t like it, it tells me maybe there’s something I’m missing.

someone please explain the beauty of this guitar to me. Do I need therapy?? And I do realize I’m asking this on a les Paul forum Lol. This thread is meant in fun.
Click to expand...

I also find no joy in a strat. I believe that the Hendrix connection is the only thing making them desirable to anyone.
I've worked on the wiring for several strats, and I still cringe every time I open one up. After seeing what I've seen, I remain a confirmed Gibson/Epiphone for life.
You must log in or register to reply here.
Share:
Facebook Twitter Reddit Pinterest Tumblr WhatsApp Email Link