Who here has both Gibson and foreign LPs?

I've got a couple of ESP quasi LP DCs. Both are phenomenal quality at a fraction of the Gibson custom shop price.

Since i don't discriminate, also have a killer strat copy

Deets on those DC's?

Yes I have a Gibson Historic from 2007. It's a great guitar.

I also have a few Tokai's, Burny's and Greco's. They are all very good guitars.

I currently have 2 Tokai HLS series that are just amazing. They are on par quality wise comparing to Gibson Historic. Sound wise, they are different but all great. Isn't it the reason we own multiple guitars?

Yes they are Kirk Hammett sigs but he doesn't play them much live. They look like the Strings & Things Gibson LPC double cutaway. They are 25.5 scale though and EMG 60/81 pups, Sperzel Trim Lok tuners, and Tonepros locking bridge and tailpiece.

The red one is a 2012 from the first year they made them and the last year they were made at the standard factory. I prefer the color and lack of first fret inlay on this one.

The black is and 2013, the first year they made the black and also the first year after they shifted production to the Kiso custom shop. They are pretty rare, I have only seen 2 other black ones here in the states. I imported it new from japan and did pretty good. 50% of local street price (special order and wait normally required) and over $5k less than MSRP. The workmanship is clearly a step up on the black one. Completely flawless as it was destined for the Japanese market. The rosewood is interesting, on the pale side.

I have about 8 Gibsons and this Korean made Agile...It's a gem.

I like the Agile so much, I am having a similar one custom made for me right now...

The Gibby LP's I've owned includes a Classic, a Studio, 3 x R9's, 2 x R8's, 2016 trad, 2016 Standard. One of the R8's was the best of that bunch.
"Others" include Epiphone, Edwards, Chibsons, Tokai, Maybach, Yaron, Bobburst.
I still own 2 Chibsons (these are my "project/learning" guitars and I've upgraded everything inc paint, just kept the wood and frets), the Maybach, and I've just bought a second Maybach.
The Maybach I own is the best of all the LP's I've had.
However, I've absolutely no doubt that equally great Les Pauls can be found from Gibson, and any of the other manufacturers out there.

I does! I have a Epiphone Tribute Plus and a Gibson LP Studio Premium Plus. I also just bought a Korean LP too. I like them all. I love two of them but only one I want to marry. Wait, I like all the LP's, just some better than others but I wouldn't give a single one of them up, not now anyway. I have pics of two of them on here. I seem to be lousy at posting them.

Though the difference between the Gibson and the other two goes without saying, I still think all three are nice and I am not too proud to play them all.

I actually have a even split of Gibsons to Japanese Les Pauls. Without question my Navigator is my go to guitar. I love that thing. I also have two Burny and a Tokai which are really magnificent guitars. On the Gibson side I have a Traditional Pro goldtop with P-90s, Gibson Custom Slash edition, Gibson AFD and just arriving today I picked up a 2016 Gibson Standard high performance.

I would say that for the money the Japanese guitars are the fantastic. That said the Navigators are almost as expensive the Gibson's and worth every penny because in almost every way I would say that the quality is equal or superior to Gibsons. That said I also love my Gibsons. I have had quite a bit of turn over in my guitars and what it comes down to is just finding the ones that work for you regardless of where it was made or who made it.

I used to have a 2008 standard, and have since had several MIJ's from Heerby, Bacchus, Greco, Tokai, Burny, Yamaki and Joodee. Most of the Mij's have been great, and the Bacchus is easily the best of them. Most of the grecos, the Tokai and all of the Burnys have been superb, and suit me better than the Gibson did. The Yamaki and Heerby leaved a lot to be desired, but they were cheaper models. The Joodee sounded and played better than almost any guitar I've tried, but that was after a set up and a refinish. The Gibson was well built, but it sounded and played just OK, wich is less than I expect from an instrument at that price. It had a lifting fret wich had to be reseated, and had paint seeping into the binding on the neck. The maple top was lifeless and boring, and it had at least two pieces of mahogany in the back. It also felt way to modern for my liking, with a chambered body. Still was close to 3,6 kg, and more neck heavy than a SG. Sold the Gibson, and haven't regretted it for a second. When I had it I used to play my Samick factory Epiphone and leave the G on it's stand. The Epi has a long tennon, had quality hardware and pickups and was refinished in nitro. A regular chinese Epi won't touch the gibby. Best build quality I've come across is the Yamaha SG's, though. Built like tanks with endless sustain.

I have a boatload of Custom Shop Gibson Les Pauls as well as a few Norlins. I do love em all but since I've acquired my 2 Tokai LS80's, the Gibson guitars don't see much use.

The Tokais are every bit as good if not a little sweeter in my opinion!

syndromet said:
Best build quality I've come across is the Yamaha SG's, though. Built like tanks with endless sustain.
Click to expand...


I like them all for different reasons. My favorite right now to play is the R8 but the quality of the other ones I have right now are nothing to slouch at. They're really nice guitars and they play fantastic. If anything, for me the biggest difference is the feel since the Gladiator is poly coated (and thick to boot). The Edwards is a really fantastic guitar and I preferred it to the white LP Supreme I owned.

i've played gibsons over the years, but, reflecting on what others have
posted, my 2013 tokai reborn old is probably THEE best electric i've
ever owned or played. construction is top notch. hardware is top notch.
playability and tone, again, are top notch. i'll never sell it.

I have a 2010 R0 Plain Top, from new, and a used, early Bacchus BLC140. That Bacchus is a great guitar but the R0 is just better. The R would need to be better, though because it was four times the price I paid for the R0. The R just feels more 'refined', especially on the neck and the fingerboard/fret are amazing.... the thing plays like warm caramel.

That Bacchus is bloody good, though and if it was my only LP type, well.... I could live with that, no problem.

I have several Gibson LPs, some Fenders, an ESP Eclipse, and an Edwards. My R8 is my fave, for sure. That said, it can't do everything. I have somewhat customized most of my guitars (except for the Fenders) to do certain sounds better than others.

Quality-wise, I'd put the R8 on top, followed closely by the ESP, then the USA Gibsons and Fenders, then the Edwards, with an Epiphone 1959 LP special edition in last place.

The ESP was a surprise, and sort of an impulse buy, but one I don't regret. I mean, I love all of them, but the MIJ Eclipse is one hell of a well-made guitar. The only thing about it that I didn't like out of the gate was the JB/Jazz pickup combo. I have replaced them with Dimarzio 36th Anniversary pickups, but I'm still not happy. The guitar is very comfortable to play, and the fretwork is beyond even the R8. I'm thinking of putting a custom-wound set in there, but I just haven't figure out what would work best.

The Edwards is no slouch. It is light, well built, and sounds great. I play it about 50% of the time, just because it is so friendly. It is right up there with the Gibson USA guitars, but just doesn't quite have that "feel" that I get from the USA guitars. It has its own feel, and it is pretty darn good. As mentioned before -- good bang for the buck.

The Edwards is the guitar that I practice on, and take to jam sessions most of the time. It's already "aged," so dings don't bother me. The other USA guitars go to the few gigs I do, and the R8 stays at home. I would only take the R8 out to a gig if it was something special and not at a bar.

I really, really like the Edwards. It feels like a "real" Les Paul, while my Epiphone doesn't. I need to sell the Epiphone, actually. I never play it. The specs say it should sound great, and it does sound good, the neck is nice and thick, and the pickups are sweet. It just feels "cheap" in a way that the Edwards doesn't. One factor there is the paint. The Edwards is full lacquer, and the Epiphone is THICK poly. 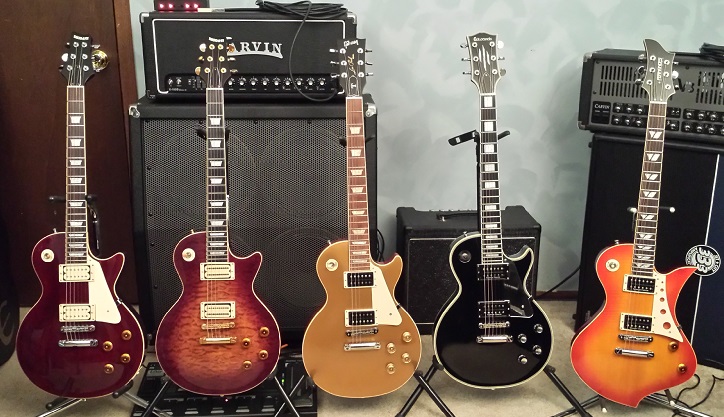 If it plays good, sounds good and feels good, it is good!
E

I had a 1966 Gibson 335. Traded it years ago. Then a 1968 Les Paul Custom..sold it.
Worked in a guitar shop and got to cross paths and play old 50s Les Pauls.
The first late 50s type Les Paul type guitar that I have kept is a 1979 Tokai LS-80 that I got from Villager....it felt like the old Lester's I got to play.
Then in 2013 I got a Gibson R9.
I played maybe 6 or 7 of them before I narrowed it down to 2.
( granted I got the Tokai upon photos and phone calls to France)
I like them equally. Also got a OBG double cut JR from Villager and found a OBG 335.
Being in the States I can get a Custom Built Heritage thru Wolfe Guitars for less $ than a imported MIJ or Gibson Custom Shop.
Incidentally the neck specs on the Heritage builds came off the 79 Tokai.
......but I like them all.
You must log in or register to reply here.
Share:
Facebook Twitter Reddit Pinterest Tumblr WhatsApp Email Link