Where is Gibson Getting This Wood - AAA I Don't Think So

Tollie said:
Ohhhhh boy, what is this beautiful color? Wow!!!
Click to expand...

Thank you. I need one in that color.

Plant man said:
I agree. I love Gibson but I think most people who are in the market for les Paul are concerned more about how the guitar plays rather than be concerned about AA or AAA top. I mean AA or AAA tops are cool. I see how some can go for that….
Click to expand...

I like it, personally. Flames give off too much of an 80's, hair metal vibe for me. The subtler the better. 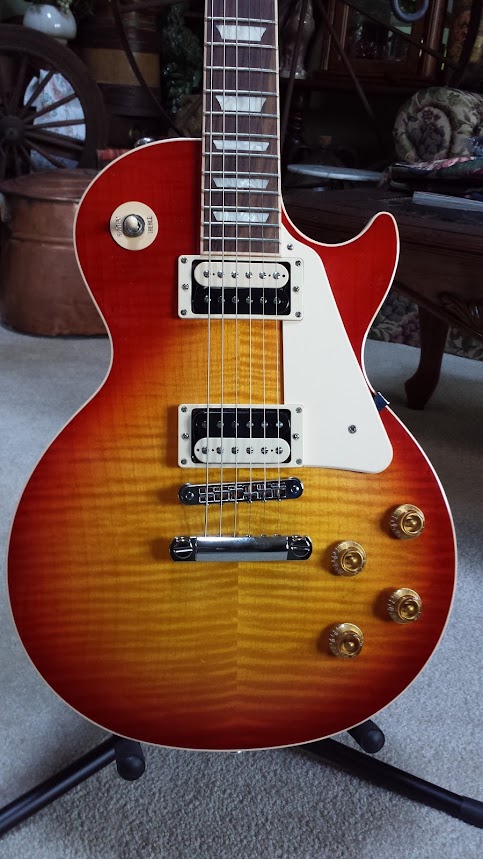 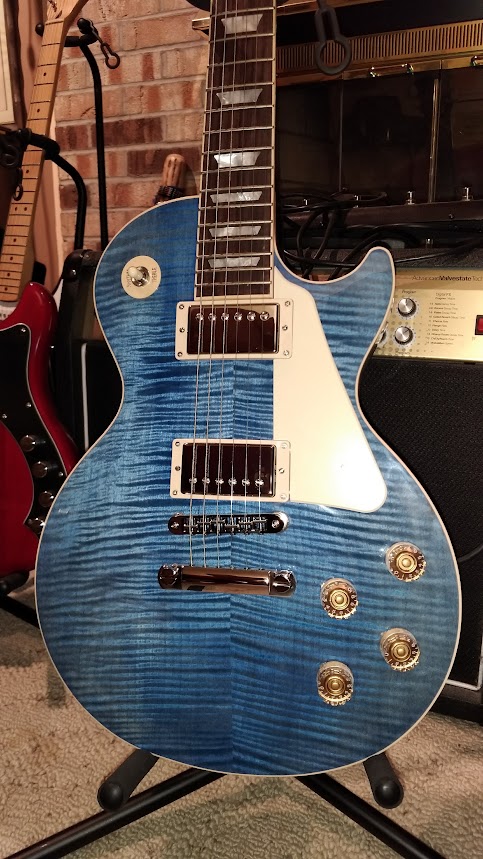 It's good to know that in 900 years Gibson will finally get their grading more accurate, AND that they'll still be making LPs!

DaveSG said:
It's good to know that in 900 years Gibson will finally get their grading more accurate, AND that they'll still be making LPs!
Click to expand...

rjwilson37 said:
Yep, when you see a super nice top, you just want to buy it right away because it may be the last really nice one for a while.
Click to expand...

for sure. this top was so different and unique, I couldn't say no. Never seen one before or since like this. Luckily it plays and sounds just as killer. NovemberBurst said:
Never judge the intensity and quality of the flame based on a Sweetwater photo. I tell my engineer every time we talk that they need to get a better location and lighting setup for photos. I make him go take pics of the tops with his cell phone to get a better idea of how they actually look.

Yeah their pictures look overblown and too bright. You honestly would have a better picture of the guitar if the lights weren’t too bright There is no standardization of the grading of maple. Anyone can call any flame any number of As they wish.

As for the Sweetwater photos, remember that with Eastern Maple, the flame has a "3D effect" that is not always apparent in the photos. Many of these guitars look quite pedestrian in photos but can be amazing when seen in person.

Western Bigleaf Maple (as pictured in the blue LP posted by @wmachine above) has flame that is much finer and more prounounced but Western Bigleaf Maple does not typically exhibit the 3D effect like Eastern Hard Maple (Sugar Maple) has. Western Maple photographs quite well and what you see is what you get.

Eastern Maple is much harder than Western Maple and some believe it has a different tone (and is usually heavier). Western is softer (still very hard) and has the fine, regular, tight flame.

Edit--in the Sweetwater photo described in the OP, I am certain there is a large amount of this 3D effect because the flame looks totally different in photos from different angles. Personally, I love the 3D flame and would have no problem buying this guitar and returning it if the flame did not match the description.

Here is a nice AAA Sweetwater Standard 60's Exclusive and it is only 9lbs with a beautiful top.

rjwilson37 said:
Here is a nice AAA Sweetwater Standard 60's Exclusive and it is only 9lbs with a beautiful top.

Wow that is a nice top. Aaaaaaaaaand...its gone.

DaveSG said:
Wow that is a nice top. Aaaaaaaaaand...its gone.
Click to expand...

Yep, I thought it was a really nice top, very sweet. Also, a nice light 9lbs, which some lucky person got it. I hope it is setup well.

rjwilson37 said:
Yep, I thought it was a really nice top, very sweet. Also, a nice light 9lbs, which some lucky person got it. I hope it is setup well.
Click to expand...

Yeah, I remember earlier on in the pandemic (before the price increase) I saw this incredible topped LP (lemonburst if I remember) over at Wildwood's site, as in, good enough that I saw other people on here commenting on that very same guitar, it was noticeably better than all their other LPs, even among the 'hand selected top' guitars. I was half-tempted to get it, just to keep it for resale eventually since I knew it would hold its value, but alas, I'm a lefty and it didn't really make and sense so I decided against it. Right after that it was snapped up by someone, and I really hoped that I would one day see it again as a NGD post on this forum. Maybe someone will find this forum and post it in one of the lemonburst threads we've got.
R

Yeah, agreed that the quality of tops has been a bit inconsistent for a while, but are still out there though. Its interesting how each era has their own peculiarities or themes. I haven't been looking at LPs consistently, but I have noticed that around the mid-2000s you saw a lot of bbq tops and straight consistent flame, which I sort of like. Around 2013 - 2018 I can recall seeing quite a few amazing tops on seemingly regular guitars, no upcharge. I feel like this era is sort of marked by the lightly flamed plaintop with some figure poking through the center, and half & half tops that seem to go light/dark based on lighting and look 1/2 figured, 1/2 plain. WIth the occasional standout top thrown in. I do think the tops today seem a bit more vintag-y than of previous eras.
You must log in or register to reply here.