What was your first guitar

My first guitar was a mid 80s Ibanez Roadstar II. I gave it to my Mother-in-Law a couple of years ago and still play it whenever we visit. 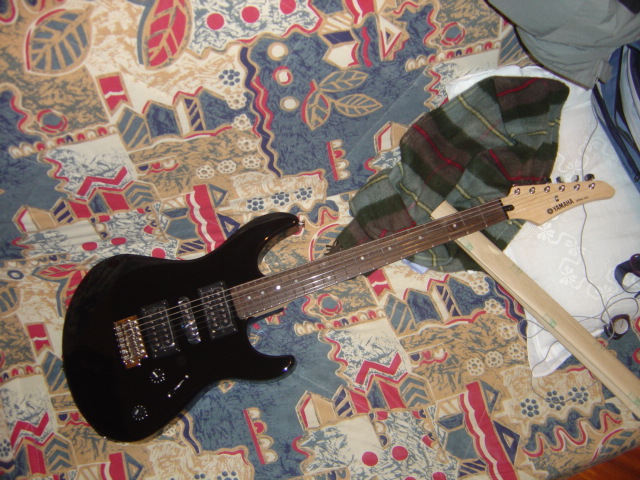 Mine was a 1966 Fender Mustang. It was 1973, and I was 14. My cousin knew someone who had a electric guitar for sale for 25.00. Anyway, she took me there to see the guitar. It was painted purple sparkel, but if that wasn't bad enough, it had a big middle finger (as in fuck you) drawn on the back!!! Anyway, I handed over 25.00, and it was mine. Anyway, my dad painted the guitar black for me (rattle can job), and I sold it 3 years later for 300.00 (I think). Then I got a used 1969 Les Paul Deluxe. The guitar was tobacco burst, weighed a ton, but that wasn't my first guitar, but it was my first love!!!! I am sorry I got rid of that guitar. I had a lot of memories with it.

My first was some cheap acoustic thing that needed fingers like Popeye's arms to hold the strings down the action was that awful.

My first real guitar was a Gibson SG Special bought out of a catalogue. It had Epiphone mini humbuckers on it and small block inlays - I was so proud of it and so pissed off when money difficulties forced me to sell it.

Several years later, I saw one advertised in a shop some way away from me and bought it. It was exactly the same model - including the bridge as two different ones had been used - but it was a bit of a mess because its previous owner, who had PX'ed it for a Les Paul, had repainted it in a pink and black crackle(!!!), including the fretboard. The shop owner, probably sensibly realising that he was never going to get anything for it as it was, decided to get it stripped and refinished, but the guy who did it was obviously told to do it as cheaply as possible, was not particularly careful about it and it really does look old, tired and battered - a shame because when I got rid of my original one it was in almost pristine condition.

As Tony Iommi was always my hero, I decided one day to give John Diggins a call and see if I could get hold of a pickup the same as the ones in Iommi's favourite old guitar. He told me 'Yes', he actually made them himself, so I ordered one for the bridge position, got the guitar routed and put it in.

It is not my favourite guitar in my collection now, but it still comes out for an airing, a polish and a play and brings back some happy memories.

Eko telecaster from seventies, it had a horrible copy of bigsby and very weak pickups.

Pain in the Rear!

My first guitar, I think I can remember that far back. It was a POS chinese thing I got when I was 8 or 9 or something, acoustic, bunch of chinese letters inside on some form of label. It had a cherry sunburst and steel strings... more of a toy than anything else! I don't know what the thing was made of, probably cardboard, but I loved it! I played it till it broke, even when I was down to one string, I played it! Learned basics on that.

Then I had my first electric, a Strat clone. Got it from a music store, very cheap, probably made by the store owner! It played okay, but I couldn't afford an amp so used a cable to hook it up to a little stereo I had with a mic input. Needless to say, it sounded like crap but I didn't care! Problem solved, or so I thought, when I bought my first pedal, a distortion pedal of course!

I wore out that guitar, learned to play "the right way" on it. I was a lefty all those years before! The guitar then turned to natural finish after I attempted my first refinishing project! Then I recruited the help of a friend who worked with furniture to give it a Hendrix vintage cream look, only problem is that the guy applied some varnish to the fretboard to make it "look pretty"!!!!!!

Still have it today, in pieces, but I can't get rid of it, too many memories!

+1 I had one also, and still have it. Mine was bubblegum pink!

How many of you youngsters know what a Silvertone is?

That was my first guitar (in High School). Sold by Sears Roebuck, it was an acoustic archtop and you could buy it new for around $25. If you wanted to step up a little bit, you would buy a Kay guitar.

Couldn't afford an electric which is what I really wanted.

Several years later, I bought a Gibson acoustic which I still own.

My first electric guitar was a Peavey Tracer.
I remember it was white and I thought it was fantastic when I got it as an 11 year old wannabe rock star.
I wish I still had it.
B

some crappy nylon strung guitar,
well like 4 of em
first half size then 3/4 then full
acctually it may only be 3 of them

first electric was a tanglewood strat copy which im currently repainting with a union jack WOOO!

71 Epiphone acoustic from my great grandfather.
You must log in or register to reply here.

What was your first electric guitar?
4 5 6