Without turning this into a NGD thread, I picked up a new ES335 yesterday - it's a 2013 50th Anniversary 1963 Reissue, which is the fifth ES-335 I've owned in my life and probably the best (though I have to wait for the Honeymoon to end before making an unbiased judgement like that).

As I played it all day yesterday, I got to thinking, what makes for a great ES-335? When you shop for a 335, what do you look for, beyond just your personal preferences in neck carve and pickup type?

For my part, I prefer lighter 335's - heavy ones, while they may have nice tone when the amp is cranked, really bother me and are a no-go. I like the body to be really resonant and to give me lots of controllable feedback when I am playing at stage volume with some gain.

I owned another 2013 '63RI that I just could not bond with because the body was too stiff and the neck had a really odd carve - too thin/flat at the nut and too thick at the 12th fret (I like big, chunky 50's necks, but this one just felt weird). This new one is just right - light, neck feels very comfy in my hand, and the body is very resonant. 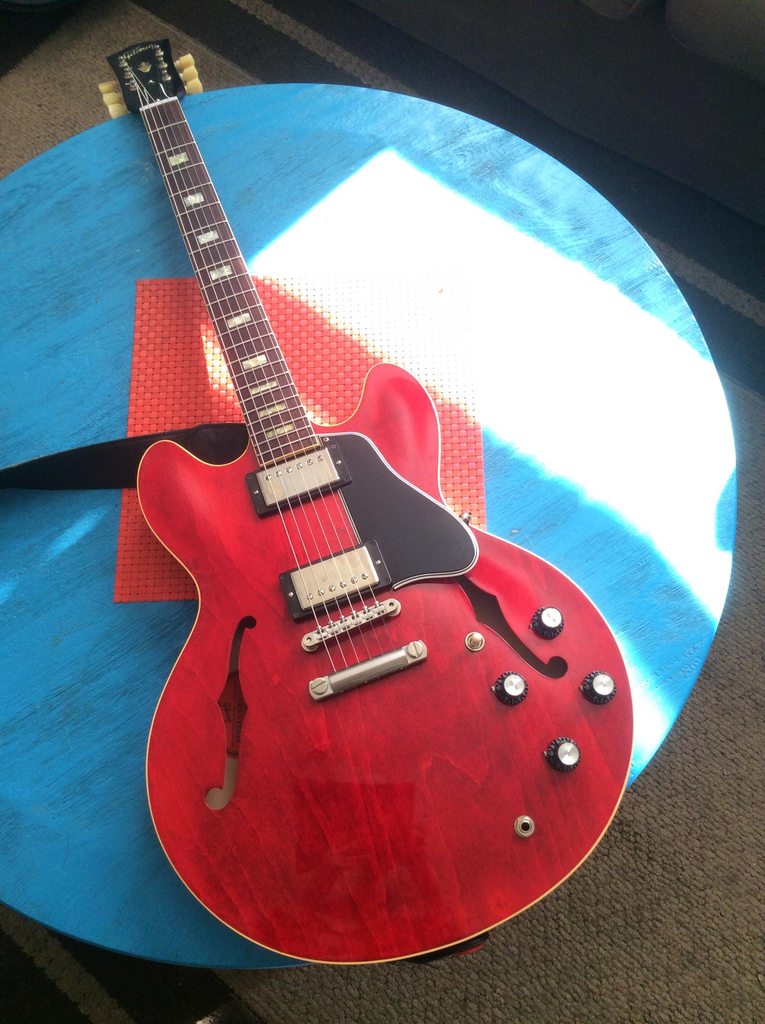 I like a resonate 335 when plugged into the amp with a rich full clean sound. Not too stiff to play and a ballsy sound with a lot of sustain to work with. Action wise I feel the 335s are harder to dial the action in than any other guitar I have had. But once you get one dialed in , it's a tone monster and a pleasure to play.

I have so much GAS for an ES-335, it's quite embarrassing.
I

budg said:
Action wise I feel the 335s are harder to dial the action in than any other guitar I have had.
Click to expand...

Yeah, I think that's true. I have owned a couple for which it was a struggle to get things just right. They definitely seem a bit more sensitive to minor changes in bridge height and truss-rod tightness.
I

I have so much GAS for an ES-335, it's quite embarrassing.
Click to expand...

Oh, I hear you! The GAS for a new ES-335 was driving me crazy and when I came across this one at my local Sam Ash I just had to have it - I put a deposit down on it immediately.

Unfortunately, I had to wait a month to get all the cash together for it - wow, what a stressful 30 days, haha! I was having recurring dreams about playing it and, a week in, I even went back to the store to put some more money down on it so I could play it for an hour. When I finally got my money in hand, I raced down to Sam Ash - but got there too early, before the store opened, and had to hang around for 30 minutes outside, impatiently waiting for them to unlock the front door.

Apparently the previous owner of this bought it in 2013, then resold it back to Sam Ash, but missed it so much, he bought it back - but then resold again it to Sam Ash recently. He had put some really thick flatwounds on it (almost felt like Bass VI strings!), which SA had kept on the guitar when I first stumbled across it. The guy must not have played it very much - with the exception of a couple very tiny dings, it is in absolute mint condition. I was able to get a killer deal on it because the guy had lost the COA and, for some bizarre reason, took a black marker to the top of the case (maybe to cover a stenciled band name? Difficult to tell now).

Vintage Sunburst is what makes a great one for me. And dots. And a medium to fat neck, if possible.

If you buy a Memphis made example, I don't think you can go wrong.

Same thing for me really, light weight and super resonant. I think heavier less lively sounding semis sound too much like Les Pauls, defeats the object....

Both of mine are south of 7 1/2lbs and the old '65 in particular is stupidly loud unplugged, it could nearly pass for an acoustic! I think that unplugged tone REALLY comes through when plugged in with a 335 more so than a solid body so that's the thing to listen for.

I do agree some newer 335's can feel stiff, I played one of those '63 reissues in a store the other day and while I was very impressed with it overall, it felt very stiff. Probably just needed a setup and a few hours in front of a big Marshall though! Congrats on the '63 reissue anyway, those are quickly getting a reputation as the best semis Gibson has put out since the 60's
I

I've owned a number of them, sold, regretted, bought another. It's the one Gibson model that seems to not change other than finishes and appointments like markers, machines and tailpieces and slight weight variations. They're fairly consistent in playability and sound over the years IMO.

Currently I have two nearly identical 335's. A 1990 and a 2000. Something about the 2000 is a bit different. Aside for the fact that the neck at the head had an "issue" (nobody can tell for sure if the head broke off or it cracked, or it stuck in a wall hanger and was re-touched) Anyway, I got a good deal on it and after nearly a year I play few of my other guitars.

Since that is your fifth 335 you'll probably find more in common with others than differences, the red is a killer color and the ES-330 style markers look great. Best of luck with it.

Faded red, a perfect exit tone from the amp and it need to fit you perfect. The correct knobs binding fit and finish. The elements I do not have words for and promise the guitar you will always keep it at hand.

gnappi said:
Since that is your fifth 335 you'll probably find more in common with others than differences...
Click to expand...

True to a certain degree...the most different one was the '07 Dot Satin that I owned, only because it had no neck binding and that weird feeling (to me) satin finish. The neck was fairly chunky on it and it was probably the heaviest 335 I have owned. I ended up not liking the tone from the stock 57 Classics - I know most people love these, but I don't dig them. I only owned it a few months before bailing on it.

The one with the most mojo that I owned was a featherweight '70/'71 with trapeze tailpiece and T-tops (I believe - never confirmed). I bought it in '96 and owned it for 12 years and would consider it the best of the bunch, but it had an ugly headstock repair that seemed to have made the tuning very unstable (especially on stage - something about the changes in temps always threw it off, plus I had an aggressive playing style back then that did not help matters). That eventually drove me nuts, so I sold it. In hindsight, I wish I had kept it, because it was naturally reliced and the pickups sounded great...oh well...lesson learned.

My two others were a 2010 '60 Reissue and another 2013 '63 Reissue. I just couldn't bond with either, for whatever reason. The '60RI was a little on the heavy side, the neck too thin, and I didn't like the pickups (57 Classics again). The other '63RI, which I bought online, was a bit stiff, had a weird neck carve, and I just didn't like the tone, no matter how I adjusted the pickups - even swapping in a Callaham bridge couldn't make me like it. Also, the high E string was always sliding off the fretboard when I played leads - something weird going on with the frets.

My new 63RI is very lightweight - probably closest to the '70/'71 (which I never weighed on a scale) and has a lot of clarity and sparkle to the tone. Definitely a winner.
H

I have a 63 Es 335 anniversary model, I really like it. Great note definition. The neck takes a little getting use too.
You must log in or register to reply here.