What is this poor soul?

I stumbled upon this miserable looking Les Paul on ebay. What do you think? Historic? 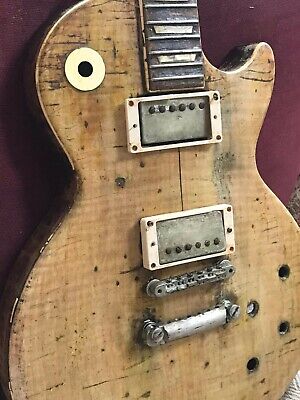 Find many great new & used options and get the best deals for Used gibson usa les paul standard at the best online prices at eBay! Free delivery for many products!
www.ebay.co.uk

Its not horrible all it needs is a little love...Charlie Brown. [besides its pre reliced]

bought it when drunk, lol, how it looked to him when he clicked buy it now: Wow, someone tried very hard to make that look like a long lost vintage LP. Looks like it was left out in the elements for a year or two.

got no clue but that thing looks like it has been sitting in water for awhile....looks a bit swollen

Keeping your guitar in the basement, during and after a few floods.... not a good idea.

That POS has been beaten and looks like it spent a month or two under water. It's not even a Gibson. The pickup cavities look like they were cut with a Dremel tool. Inlays are crooked and not the right shape. The scratches and gouges look very unnatural. It practically looks like it was made out of cake and icing. I suspect its a poorly built replica that was beaten to hell to cover-up the poor workmanship.

Maybe the seller bought it as he says, or maybe he's playing innocent thinking that some bidders will believe that its an abused original 'burst and they'll pay gobs more money for it than its worth. Meanwhile, he never claimed it was a 'burst, so "Sorry, no refunds, it was sold as described".
Last edited: Sep 25, 2020

Looks like it was beaten with a hatchet then thrown in a river.....and left there.

No thank you.
N

And even with those pictures, It'll be flagged by the buyer as "Item not as described"
J

Maybe it’s made of swamp ass, a close relative to swap ash.

Auction has been ended 4 days early. Wonder if it was pulled because the listing was reported to eBay for an inaccurate description, or if the seller ended it early because he accepted a Buy It Now deal through private messaging...