What guitars did you buy in the past 12 months? Wow! It's been good to both of us I see!

Did a gear swap for these two (Supro and Airline), and the amp: 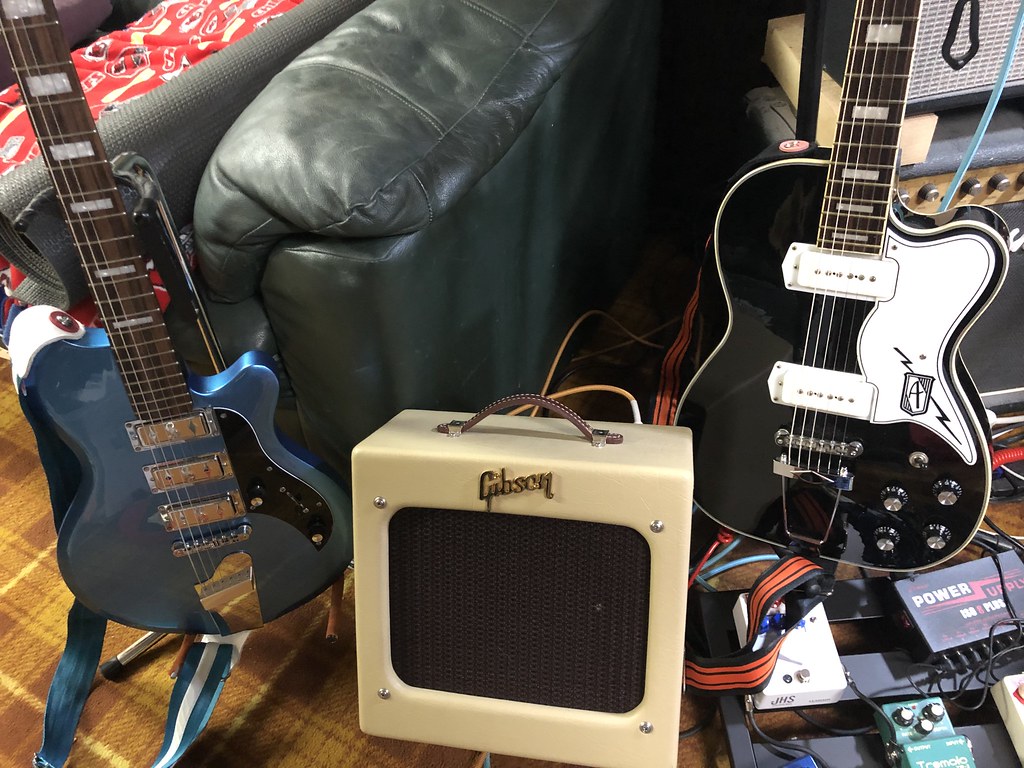 Bought this for myself - ES-335 Figured 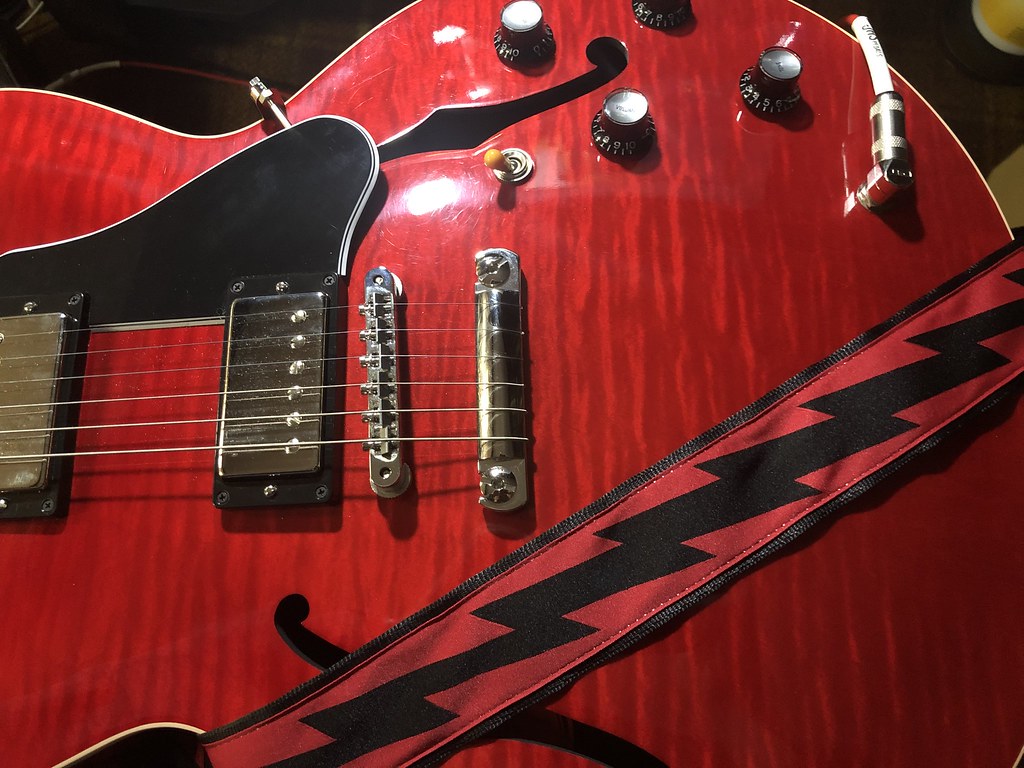 Just one. First guitar I bought in three years. Gretsch Pro Jet. Christmas pressie to myself.

haven't bought anything or traded in the last two years .I'm prett satisfied with my stash however they need some pickup improvements
zdog

What do you think about the HLK guitar? I owned one awhile back and it played great, just didn't do anything for me. Didn't inspire me to play and was kind of sterile for some reason.

I picked up an Edwards LP last summer from the MIJ classifieds here. It's the replica Jimmy Page model and I love it; instant bond.

It's my "leave out all the time" practice guitar and so ends up getting more play time than almost anything else in the collection. Yes it's factory relic'd, but it's a 17 year old guitar now in its own right and as comfy as an old broken-in pair of sneakers. Wise Guy said:
What do you think about the HLK guitar? I owned one awhile back and it played great, just didn't do anything for me. Didn't inspire me to play and was kind of sterile for some reason.
Click to expand...

I had a time trying to get it to intonate, tweaked the neck to the limit even after their setup. It's ok, but nothing inspiring. It's about what you'd expect from the price point, could use a lot of upgrades but not something I want to throw money into, however it's not horrible to have sitting around. Don't think I would buy another, but it's not absolute trash. I own enough Gibsons. Both were opportunistic buys. That neck-through Jackson was almost given away.

jlf599 said:
I went on a bit of an EBMM kick -- mostly all prior to EVH (and definitely all prior to the price craziness that followed for Axis and Wolfgangs after his death.) I bought a Wolf and then tried an Axis and liked the more traditional neck carve more...and fell in love with the EBMM necks in general. Now most of my guitars are EBMM. If there's an upside to quarantine craziness, I've found that I'm an EBMM fan but also, no longer experiencing crazy GAS.

#1 - EBMM Axis Blue Dawn - Loved the neck, loved the pickups, found out for the nth time that a Floyd just isn't my thing. Sold.

#2 Loving the neck but chasing the PRS Hollowbody and piezo sound. Ended up selling this one, too.

#3 - Picked this up in a deal that was too good to pass up. Sold it because like the Blue Dawn above, Floyds, no matter how many times I keep trying, are just not my thing.

#4 Picked this up as a nostalgia buy. Always wanted one and never pulled the trigger when they were new. Never really bonded with it and sold it a few months later.

#5 This one actually came before the Axis but just found the folder of pics. Loved the guitar...until I played an Axis. The Peavey Wolfs were great. I prefer the EBMMs more, though.

#6 Straight collector purchase - I'm a Phil Collen fan and stumbled on this at CMC's website one day in quarantine and called immediately and got it.

#7 Axis Hardtail - a pretty rare bird. This was where I started finding a home with EBMM and realized that they had reeled me in. I ended up selling this one because someone offered me a very nice sum for it.

#8 EBMM Axis SS 2007 LE hardtail in Blue Dawn. I love this finish. I snagged this one at a great price and it's my go to these days.

#9 EBMM Luke III in Fuschia Sparkle. I'll admit that the finish reeled me in, but the Luke has become one of my favorite playing guitars. I'm not sure why I never took my own pics! Still on the wall today.

#10 Another EBMM BFR that I couldn't resist -- Steve Morse HH (#69!) in Tahitian Blue. I joke that this is the best Les Paul I've ever played. It sounds like my Standard but weighs less and the neck finish suits me more these days. (I'll never sell that Standard, though, for sentimental reasons.)

#11 - Axis SS BFR 2018. This has become another favorite. It cements that I love the Axis but need a hardtail or traditional trem.

#12 EBMM Cutlass RS - The continuing quest to find a triple single coil Strat I actually like and will keep. I think this one may win that contest.

#13 - Finally found the PRS HBII I wanted. I had one in the mid 2000s that I sold and regretted selling.

#15 - The most recent addition - EBMM Sabre in Pacific Blue Sparkle. This was another one I bought without having ever played the model...but I'm confident that I've found a winner. The pickups are outstanding and it's just fun to play.

I got my first EBMM this year too. It’s just a lowly Sub1, but man it is/was an eye opener. These guys really know how to build a guitar, everything about it is just about perfect, and it really punches above its weight class when you consider it was their cheapest entry level offering into the US built lineup.
I’ll snag some pics for the thread later.
J

smk506 said:
I got my first EBMM this year too. It’s just a lowly Sub1, but man it is/was an eye opener. These guys really know how to build a guitar, everything about it is just about perfect, and it really punches above its weight class when you consider it was their cheapest entry level offering into the US built lineup.
I’ll snag some pics for the thread later.
Click to expand...

The Sub1s are AWESOME guitars! So much bang for the buck there.

Adinol said:
Let's see what guitars (or basses) you all bought (or traded in) in the past 12 months.

Here's what I brought home. 1990 Yamaha Pacifica rebuild. Bought a replacement neck for this and took it to Freddy G for best fret levelling job, bone nut and setup. Came back like a new guitar, so…. Pop1655 said:
Staying - lower end Martin, perfect acoustic for me, just what I was looking for, don't see upgrading or selling

Never get rid of the inexpensive Martin that sounds great! The world is full of great, expensive guitars but the great sounding inexpensive Martins can be a friend for life and if you let her go you will likely NEVER find another just like her! Goes from living room to campfire/beach and every where in between! No frills, no need to baby, no tears if you ding it. A fit for every toolbox!
I have one and a buddy who was playing it fell in love. This guy actually has won a (gospel) Grammy. He said, "Ive got to have this guitar" I kept explaining it is not for sale! He kept upping his bid to the point where I could have likely purchased a much nicer guitar--but I knew as soon as she walked out I would never replace her. Here she is--1997 Martin HJ-28 with a repaired top seam separation. Imperfections do not photograph well but there are a bunch of them. She was "well loved" by the previous owner. I may ask to be buried with her.

Only one. A humble MIM tele. Solid guitar. Love It Any harm playing a bass though a guitar amp?