What guitar did you fall out of love with the fastest ?

I don't buy guitars on impulse so generally, anything I buy, I keep. However, these two were probably my biggest disappointments.

When I saw this Anniversary Mary Kay Strat at one of my local shops, I was in love! 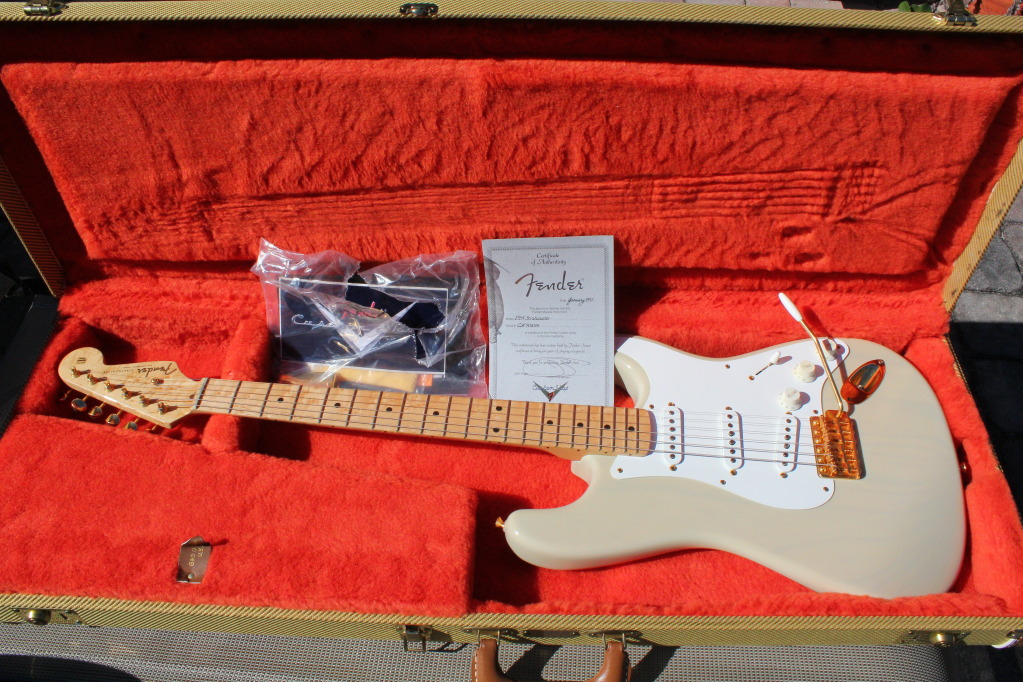 It had a big, fat, bird's eye maple neck that felt perfect in my hand and sounded great. However, the frets were so low, it was a bear to play. I used it for chord work and funk/RB stuff but I could never use it for any rip-roaring rock playing or bendy blues.

I had four other Strats at the time so this one was getting zero play time. Just when I decided to get it refretted, I found the PRS Santana I had been looking for and ended up selling the Strat for the PRS. I had the Strat for a few years before I let it go. I sometimes wish I kept it but the Santana makes me forget about it.

The other guitar I wanted to love but just couldn't make sound good was this Gretsch 6120 SSL: 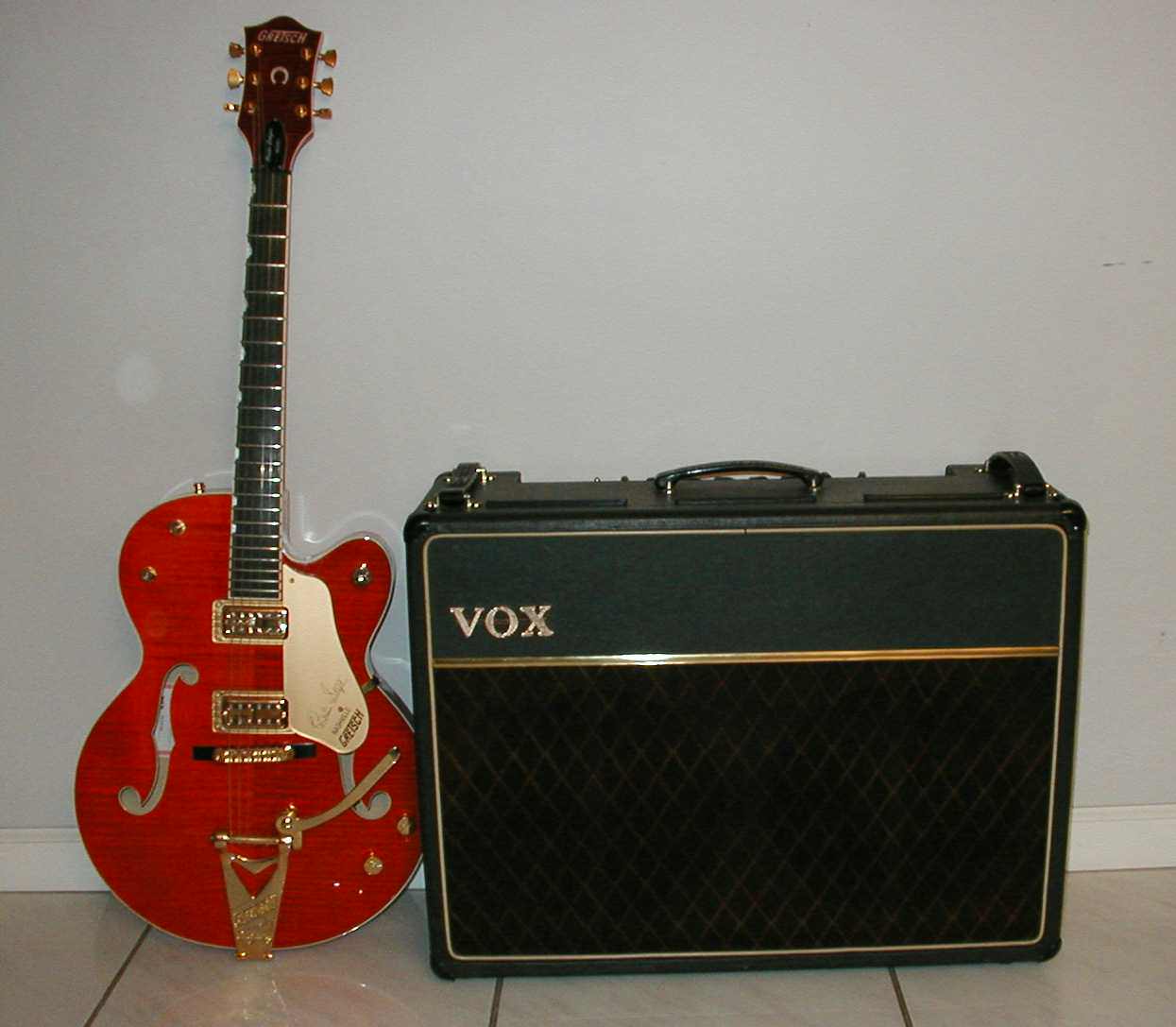 I always wanted a Setzer Sig and won this one for cheap on an eBay auction. However, the excitement turned into disappointment as I could not get that guitar to sing at all. Over the course of several years, I tried a new harness, new bridges, new pickups, nothing worked. It just didn't have that Gretsch sparkle. Eventually I just sold it as it was not enjoyable to play. I now have two other Gretsch guitars that are killers and I don't miss the Setzer at all.

The only guitar I dumped that I don't regret was a Tele. It was completely lifeless and sounded like half a Tele.
M

Kansas_LP said:
Every PRS I’ve ever owned… luckily they have all been SE’s. They are great looking but that’s about it.
Click to expand...

I've had two American PRS' and they both sounded just okay to me. Very generic and bland. Certainly didn't wow me for the $3600 price tag.

An Epi SG that I had over 20 years ago. It was a dog. And the finish would just flake and fall off for no reason whatsoever. I had it less than a year.

Charvel So-Cal Pro Mod. Unboxed at 7pm. Back in the box ready to get shipped back to Sweetwater at 8:30pm.

Felt cheap, color I order (this matte blue with black pickguard) looked cheap, and I hated the way the wide tall frets on the flat neck felt.

Strats. I love the way they look but hey never work for me. Went through three USA models, a custom painted '70's three bolt, a Hwy 1, this one... Sold them all. Then I bought a "79" a couple years ago that turned out to be an '81 and ended up replacing everything except the neck and tuners and it sounded amazing. I can live with a Basswood or Mahogany bodied Strat.

I also have a Gibson Fying V Faded that I have been struggling with for years. I've had another V that was great, this one just doesn't sound right.

I can see it happening, but I’ve yet to do so.

my Am Std Strat. I've had it for maybe 10 years, could be longer, really want to like it, but..

I have 2 loaded pickguards (59/62s in one, Texas Specials in the other), I have 2 replacement necks, I've got a Clapton mid boost circuit board, I blocked the trem.

It's okay, but just not great for me. I'm just a Les Paul guy I guess. OTOH I really like my Tele. Probably because it's closer to being an LP.
D

A 2016 Jackson neck thru body with mahogany finish. Felt great and sounded cool but could not get certain buzzing frets to stop. Also, it lacked a soul. It was super light too. I just sold it to a happy buyer and now I’m getting rid of a 2021 PRS CE Tremonti. Looked cool but the neck feels horrible. I think its for shredders- flat and wide. I’m selling it after 2 months. I gave up on finding a decent production model guitar sub-1k. I found out about MIJ and just received my first over 1K guitar. I’m loving it and dont want to change a thing on it.

2000 usa line Gibson Les Paul Custom. It wasnt a bad guitar really but I had other mij customs that maybe were not as high class but I just enjoyed more. They were also $1500 cheaper so I flipped the Gibson. They always sell.

I wouldn't exactly call it 'fall in love' - but some years back I found an inexpensive Dean Flying V that I thought played and sounded pretty good . . . but somehow, in between the music store and my house, it turned into a waste of money. I gave it to a young kid who was looking for his first full-sized guitar, and he thought it was just about the coolest thing in the universe.

All got sold a year after purchase lol
You must log in or register to reply here.

I LOVE the Smell of Exile in the Morning
2

Q & A with the REAL Owner of the Controversial Hunterburst Guitar!
8 9 10