"Only The Symbol Remains" 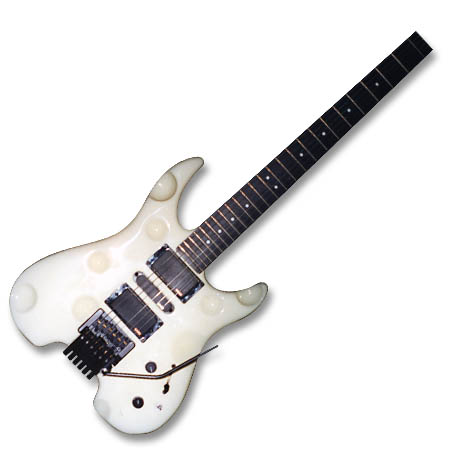 Pretty much all the guitars offered by Blackbird would qualify as "weird." Odd body designs, composite construction, etc. The only thing not weird is the tone.

I'd really like to get my hands on a Blackbird Rider.

My Steampunk travel guitar, built for me by a luthier-friend.

FrankiePRS said:
My Steampunk travel guitar, built for me by a luthier-friend.

I had item C from that ad!! It was my first guitar, is this an ad from Sears?


cynic79 said:
As much as I enjoy my Gibsons and Fenders, I have always had a soft spot in my heart for the more perverse side of guitar-dom. I think it started with my first guitar (Letter B on the right):

Toogy said:
I had item C from that ad!! It was my first guitar, is this an ad from Sears?
Click to expand...

I got mine from a friend along with an amp for $60. I still have both, although the guitar is not in the best shape (but then, it never really was). The amp has a very mechanical sounding tremolo, and it sounds kinda cool in a lo-fi way when you crank it up.

FrankiePRS said:
My Steampunk travel guitar, built for me by a luthier-friend.

Check out Josh Hommes' Cathedral guitar...the audio sync is out but still it is damn...weird!

BTW...Josh really does rock on the guitar

. Keep an eye out for the new side band's "Them Crooked Vultures" album with Grohl on drums AND John Paul Jones on bass! How fricken sweet of a line up is that!?

On a somewhat similar note, I'm rather intrigued by the new design from Composite Electrics. It too has a very slim, contoured body shape.

I don't know if this even really "qualifies" as a guitar, but I actually have one. It was the first "guitar" that I ever got.

A Unisynth XG-1. Strings are about 5 inches long and the fretboard is a rubber membrane that senses where your fingers are. And sensors on the strings sense you plucking them. Little built in amp/speaker. Sounds like garbage, either through the speaker or through an amp. Not sure why I keep it, other just just shock factor.

Brian Krashpad said:
The Seven Stars are different in some important aspects from Jet Stars, though. Most importantly, they don't have the same GoldTone pickups made in the USA Fender plant. So, the best feature of the Jet Star is missing.

Second, the scale length is different. Sevens have a 25 1/2" scale to the Jet Star's 24 3/4" LP-type scale. Maybe that contributed to you finding it "hard to play?" It would add a little extra weight too, though not much.

As far as heavy goes, that's a relative term. I just weighed my Jet Star. 8 1/2 pounds. That ain't heavy at all (unless you have back problems or are a little girl or something). I have heavier LP's and Teles, easily.

I'm not sure what you mean by hard to play either. You were uncomfortable with what? The longer scale length? I know that would bother some, but apparently not you, as you report you traded it for a Strat-- which has the same scale length. If you are talking about the body shape, I have found exactly the opposite to be true, it may look odd but it's perfectly ergonomic.

Sorry it didn't work out for you. Why did you buy a guitar you found "ugly" in the first place?
Click to expand...

Return of the dead thread!!!!

I actually just found that I had a reply to this..

The guitar was an oddity.. I had to have it. The color was awesome, and it was a 7 string (I was a nu-metal wannabe at the time) so I couldnt pass it up when the chance to buy it for $125 came up.

Hard to play: I'd never played a 7 string before, from what I remember now, the neck was ridiculously wide and flat. I'm sure I could have worked it out if I'd stuck with it, I'd love another try now. Also, it seemed to be pretty neck heavy. My Iceman was like that too though..

It was quite heavy too. I'd say it was heavier than my LP, but I dont know the weight.. and it was many years ago now.

Here is the Chico Hablas model by Jerry Auerswald. Definitely NOT for everyone, but I've always been intrigue by what these designs must actually sound and play like. I've always admired the fact that he's built almost all of his own hardware on most of his guitars.

I contacted Auerswald about 5 years ago and he told me he the locking tremolo contains 120 handmade pieces, and he designs his own parametric EQs in each of his guitars. The back of this guitar has a HUGE cavity which houses whatever the hell is in there

Oh, another somewhat-weird make of guitar I've actually played are Totem Guitars by Michael Spalt. Before putting together these guitars, he typically houses a bunch of objects in a resin top, either what he lying around or what you specify. Others are pretty simple and are like this