She mostly played a Gibson Les Paul on some of the Bangles biggest records...”Different Light” and “Everything...” but I have also seen her play a Fender Telecaster, a Fender Coronado, an Epiphone Casino 12 String Electric guitar and a Fender Stratocaster.
She owned about 4 or 5 Gibson Les Paul Electric guitars (about 3 of them were stolen and never recovered) and I remember that her fiancé Bobby Donati, who died Of leukemia in 1991 was an avid guitar collector and owned several Fender Bass VI, Fender Telecaster and Gibson Les Paul Electric guitars. I also remember that some were auctioned off and that she had Daisy Rock Girl Guitars create a Gibson Les Paul-like model for her. Here is a picture of that Daisy Rock Girl Guitar Les Paul:

Here is that picture of Vicki Peterson playing a Gibson Les Paul in the picture sleeve for All Over The Place:
Let me know what you think of the Bangles guitar gear. Thanks

Interesting info! Vicki's a pretty good player, never knew that about her guitars getting stolen. That seems to be the case with many famous musicians that have been around for some time. Surprised none have resurfaced.

You state that "Susanna switched to Rickenbacker guitars at the request of Vicki", for what reason, did it say?
Last edited: Apr 15, 2021

LPJNoob said:
You state that Susanna switched to Rickenbacker guitars "at the request of Vicki", for what reason, did it say?
Click to expand...

Either that or nostalgia

Cool info, thanks. Thought it might've been something like Vicki wanted to solely play LPs or something.

Vicki Peterson also owned several Fender Bassman and Fender amplifiers, especially Fender Twin Reverb Amps, but they all crapped out from water damage in New Orleans In 2005 during Hurricane Katrina, where she was living at the time. Vicki with a sunburst Custom in 1986.

This Custom has black reflector knobs and a mini toggle located above the bridge tone knob.
Last edited: Apr 17, 2021

We only talk about Susanna cuz she’s hot. We have no idea how good she is on the guitar.

LPMarshall Hack said:
We only talk about Susanna cuz she’s hot. We have no idea how good she is on the guitar.
Click to expand...

Even though Susanna Hoffs and Vicki Peterson are female guitarists, they are tough as nails.
Go buy yourself a Susanna Hoffs Rickenbacker model.

IMMusicRulz said:
Even though Susanna Hoffs and Vicki Peterson are female guitarists, they are tough as nails.
Go buy yourself a Susanna Hoffs Rickenbacker model.
Click to expand...

I bet I can take em Sunburst Custom and Rickenbacker up front with The Bangs (later The Bangles) in 1982.

This 1972 Custom has gold reflector knobs and what appears to be black rings under the tailpiece studs.
Last edited: Apr 26, 2021

Susanna must be tiny...looks like shes playing a cello Sunburst Custom with black reflectors and mini toggle in 2001. Vicki Peterson
Vicki Peterson’s life in music began with a plastic guitar from Sears. She “got serious” when, at the tender age of nine, she became the proud owner of an Electro ES-17 guitar and an 8-watt Rickenbacker amp.

Vintage Guitar: Which guitarists inspired you?
Vicki Peterson: I’d have to say George Harrison, and a little later, Paul Simon. In high school, I discovered Bonnie Raitt. Because of her, there was no obstacle in my mind, because of my gender, that I couldn’t be playing electric guitar. It was so great to see a woman doing it so effortlessly. I was really influenced and impressed by that.

Was your next guitar the double-cutaway Univox Ripper?
Yeah, it was a really clunky guitar. I’d sold the Electro for some odd reason and was playing mostly acoustic. The Univox was stolen, which was a gift in disguise, because that’s when I bought my ’72 Les Paul.

And you wound up with two Les Paul Customs…
Yes. The original was dubbed “the love thing” because it played like a dream. It was accidentally dropped by a member of our road crew. He was so wracked with guilt that he actually gave me the (second) Les Paul! The black rings under the tailpiece studs are clearly visible on Vicki’s ‘the love thing’ 1972 Custom in this photo.

I always found bass player Michael Steele to be an interesting person. 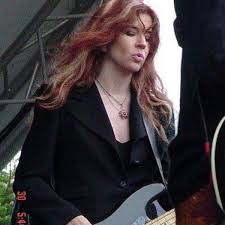 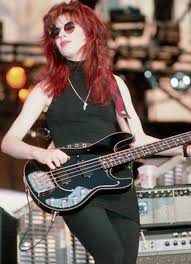 My best friend had a "rendezvous" with the bass player back when they were "the bangs". His band and their band were on the same bill at some club in LA.

She is. So is Jane Wiedlin.

Ric 325's were perfect for Suzanna because they were so small.

But the damn things are hard to play, so she switched to full scale models.

John Lennon liked them because the boogie Chuck Berry rhythms he was playing in the early Beatles were an absolute breeze to play. Try playing "Little Queenie" for 20 minutes extended in the key of F on a full-scale guitar.

Your pinky finger will hate you.

But if you look at any footage of the early Beatles when he's playing that guitar, he never gets past the 7th fret.

It's just to damn small.

And you can't play lead on them for shit. I've got one sitting right here.

I do find it amusing that someone like S.Hoffs who's so tiny, found it (like most folks) too small to play well.

John Fogarty made good use of them to, but it was limited mostly to swampy E7 stuff like Green River.

A lot of his stuff was played on a LP Custom.

But he did do an 8 minute version of Suzy Q on that damn Ric. Anybody who can carve a 6 minute lead out of a Ric 325, that's a remarkable feat. A 6 minute lead break is tough enough on any guitar.