Traveling to NYC on december from a tropical country..what should I know?

having kept my job for the upcoming new year, my GF and I decided to take a break and see the snow for the first time. We are going to stay in NYC for 2 weeks and travel to Boston and vicinity and then Washington and vicinity by car in the next 2 weeks. We have tickets for December the 13th.

We have some questions that might be too obvious for higher latitude dwellers regarding the clothing needed to not freeze and the antics of driving a car in the snow. Maybe we are completely unaware of other stuff related to the season, so maybe you can help us with a little advice.

Thanks in advance and happy thanksgiving (36 years since the Last Waltz i think).

Watch out for the people!

In all seriousness, Have a great trip! Bring warm clothes which are waterproof. Getting wet will make the cold much more dangerous. Waterproof, insulated boots will make you much more comfortable
J

It's gonna be cold.

We are used to temperatures of 30 º...but Celcius
J

Will be windy, too!

I'd rather visit Colombia for a few months.

yeah.... you wont find that in the area of the US you are going in December lol 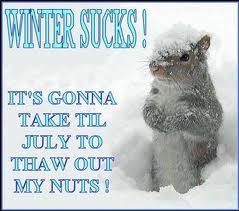 It can be very tricky... but then, NYC isn't generally noted for truly incredible amounts of snowfall, and from what I understand the city is quite efficient in removing it.

One thing to know, however: when traveling on an overpass, you're likely to run into ice quite often... and the ice is a bit more dangerous to motorists than the snow is.

Just look for black patches on the roadways... that's the ice sitting there, waiting for you. So long as you don't go too fast, and avoid heavy braking, you should be okay, though.

Be careful and have fun!

I could see coming to the East Coast in winter from Columbia; you can put on extra layers of clothes.

What I can't see is you coming to the East Coast and driving in snow for the first time, especially in the heaviest snow part of the winter.

Trying to drive in snow for the first time in a foreign country will make for a very bad vacation experience, besides, trying to use a car in NYC is not going to fun at all.

Driving in suburban areas or out in the sticks would still be dangerous for you in winter, driving in urban areas would be a recipe for disaster.

NYC is ideal for learning to drive in the snow, the residents are renowned the world over for their patience and easy going manner.

I'm due west of NYC about 500 miles, so they usually get the same weather about a day later. It's been in the 20's F for about the last week or so. In November.

So about -7C metric.

Driving in winter around Boston, NYC, and DC if you're not experienced in driving in the snow is not recommended. Those are some of the worst areas to drive when it's warm and dry. Buckle up and good luck.

12watt said:
NYC is ideal for learning to drive in the snow, the residents are renowned the world over for their patience and easy going manner.
Click to expand...

Yeah...the equivalent to "getting the cold shoulder" or being ignored in NYC or Boston is the feeling you get when NOBODY cuts you off in traffic.
B

The best advice I can give you about driving in snow is to allow yourself the time and distance to slowly react....meaning dont jam on the brakes, or suddenly swerve. Ice is WAY more treacherous than snow, and you can't always tell you're on it. I would suggest that you invest in helmets and 7-point safety harnesses since its your first time. A fire extinguisher might be wise as well. When I drive in the snow, I usually also carry a survival gun (410 shotgun over a 22LR) in case I have to hunt for food or defend my roadside camp/crash site from roaming bands of other snow-bound victims. It might be hard for you to acquire such a weapon, so I'd suggest an axe. Not a hatchet, but an axe. You can't hunt small game with a hatchet, but you can with an axe. Be careful though, as an axe can easily get stuck in the skull of a bear, and it isn't easily removed. Next thing you know, you're tangling with a pissed off bear who now has your axe. You don't want that, and the bear doesn't either. Maybe you could find a cow. You can also climb inside of its slaughtered mess of a corpse for extra warmth. You probably already know how to cook cow, so you're good to go there, unless you want burgers. If you already know you want burgers, you'll need a meat grinder. If you choose an electric, it'll need to run on DC. If its hand-cranked, make sure you can crank it while wearing mittens.

Hope this helps.....just remember.....when driving in the snow, it's really important to choose the right meat grinder.

in NY you drive a cah.
You must log in or register to reply here.

How do I post a pic from the desk top on my Mac.

Have a few NGDs to catch up on. Here’s the first one.