today, in my sleepy little village...

every year in my little village there is a car rally which lasts for a weekend.
now, i'm no killjoy, but the thing is a f*cking nuisance - roads closed, cars and trailers parked everywhere and every d*ckhead with a vw golf and wide rims from all of the south revving their engines up and down the village all day and night.

i was out in the back garden this afternoon trying to drown out the noise of the engines by making some wooden garden furniture, when i hear sirens. and then more sirens. then helicopters. then more sirens... 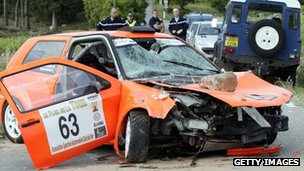 The driver of the car suffered light injuries


A rally car in the Var region of southern France has ploughed through a crowd of spectators, killing two people and injuring 17.
The car left the road at Plan-de-la-Tour, near Toulon on France's Mediterranean coast, after the driver apparently made an error.
One of the dead is said to be a rally marshal and several children are believed to be among those hurt.
The Pays des Maures rally was being held for the 14th time.
Emergency services were deployed to the scene in force after news of the incident at 16:30 local time (14:30 GMT) on Saturday.
France's new Minister for Youth and Sport, Valerie Fourneyron, said the incident raised a "serious question about the safety of the public at car rallies".
Services 'overwhelmed'

Dominique Demeyer Witness
The driver of the car suffered light injuries, France's TF1 broadcaster reports.
He has been taken to hospital where it will be established whether his condition will allow him to be taken into custody, regional prosecutor Danielle Drouy-Ayral was quoted as saying.
It appears the driver made a mistake at an intersection where he was supposed to turn right and instead drove straight ahead, crashing into the crowd.
The Var-Matin newspaper quotes another driver at the scene, Dominique Demeyer, describing what happened: "The car took off straight ahead.
"It crashed into a first row of spectators before peeling off and mowing down other people who were further off."

Of those injured, four were seriously hurt, emergency services said in a statement quoted by France 24 TV journalist Ebba Kalondo.
Rescue services were overwhelmed by the scale of the crash, Ebba Kalondo wrote on Twitter.
"Guy speaking to us half hysterical," she added.
The rally, which covers 157km (98 miles), began on Saturday and was due to continue on Sunday.


hopefully there will never be another one.
You must log in or register to reply here.