Ermghoti said:
A guesstimate based on my recollection of recent surveys. Accurate enough, as it turns out.

Not all of them would recognize a DE on sight, but as I said, it's one of the more iconic handguns of the last generation.

That also assumes that the audience is primarily from the US, of course.
Click to expand...

Interesting stats and kind of laugh to keep from crying-ish. Gun ownership in less homes percentage wise but volume of sales up. So guitars aren't the only boy toys people hoard?

Ermghoti said:
Nonsense. I posted an alternate opinion, with not a shred of judgement or invective, now you're angry. Other than calling loading a .50 cal case to 9mm "stupid," I didn't make any value judgement whatsoever. And yes, to most of the 1/3 of the audience that owns firearms, and to the remaining portion that is aware of the iconic Desert Eagle, a staple in entertainment and gaming for 30 or so years, that is roughly equivalent to depicting someone plugging an acoustic/electric directly into a speaker cab and filling a stadium with brown sound.

I'd expect the writers of a heavily budgeted, top rlattd show to take the 60 seconds to google "how hard is it to make a bullet" before plowing into a script.
Click to expand...

Your discourse was rough and discourteous, and continues to be so. But what I experience as I read your unctuous words is not "anger" per se, so don't flatter yourself by thinking I'm taking much of this seriously. You're not actually all that impressive.

Mainly, I'm just calling you on your unnecessary behavior. You seem prepossessed of the overweening attitude of people whose fandom runs a bit too seriously for me to take seriously.

The popularity of the show and associated merch would seem to attest that millions of viewers aren't all that concerned with such specifics as you seem to find so terribly important.

Meanwhile, it's useless for you to speculate what percentage of people would recognize not just the Desert Eagle, but to also recognize a spent cartridge from one.

I understand that how the collection of the casing was effected and the deduction that it was in fact a .50 AE. My point is that such details aren't precisely critical to the success of the show.

I think they used it because it was likely just easier to get on camera.

Via the magic of the inter-web and TWD comic fanboys I'm caught up on the Saviors story arc and it turns out, they're just a bad bunch of people with few skills besides being violent. So far it's worked for them.

Knock off the fighting please. Move on...

Girls girls, you're both pretty

kmk108 said:
As someone who knows absolutely nothing about cartridges and casings, or anything ammo related, it's not something that even entered my mind. The vast majority of people watching the show don't either.
Click to expand...

Dilemma said:
Me either. Just enjoy the show for what it is for cryin' out loud.

I bet some of the posters in this thread a blast at parties.

they took it there. The writers. They had Eugene spouting off mechanically about turret presses and such (I own one, most reloaders do). If they're going to try and dazzle us with "things reloading", bullet manufacturing, et al, then they'd better bone up.

They and the audience would have been better served if the girl or Eugene had simply found a stray 9mm round laying about somewhere, in a drawer, etc.

Gonna go to a dance, you'd better know the steps.

As well, some people take it too far, and hate to be wrong. I remember the Breaking Bad thread, where on the opener for the last season, skipped to scene from the last show of the series. Walt opened his trunk and there was a weapon and a box of ammo.

Such things are instantly recognizable to me. But those who claimed otherwise gave me a bit of the ol' stink-eye over that.

Edit: I was typing as well. So, yeah. Let's move on and quit with the pissing contest.

I just enjoy being pedantic.

I am enjoying the show more than I have in a good while now that Negan has shown up. I particularly enjoy the times Negan points things out to Rick, leadership-wise. Rick has gotten soft in Alexandria, and I think he realizes that. Maybe we're ready to see the Rick who ripped a man's throat out with his teeth again.

Not a fan of Farmer Rick? 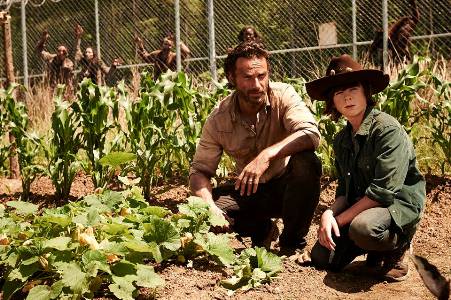 I wish someone would shoot Rick in the head as he's made more bad choices than a bunch of super hot drunk near sighted sorority sisters on spring break after mistaking roofies for their birth control pills.

Yes it is. Gonna be interesting to see the gang team up with the others. I anticipate much friction,Rick just doesnt play well with others.

Is the continuance of this season starting this coming Sunday?

LtDave32 said:
Is the continuance of this season starting this coming Sunday?
Click to expand...

Yessir!!! My daughter has a complete TWD party planned up,complete with Wings,beer and the ole chips and salsa. I guess this is our Superbowl

Ah I love these mid season breaks. So what was happening again? Oh yeah it's TWD, it don't matter. Chances are we were going nowhere fast.

Greco said:
Ah I love these mid season breaks. So what was happening again? Oh yeah it's TWD, it don't matter. Chances are we were going nowhere fast.
Click to expand...

Nawww,this is a build up,man. Im really hoping to see some brutality laid down on Negan. However,having said that,I dont wanna see his character go away. Ole JDM cracks me up: Its gonna be pee pee pants city here real soon. I was busting a gut after he said that. The rest of the Family just didnt understand why

oh yeah this show comes back....guess I'll wait to hear initial reviews late sun early mon before I decide to use bandwidth to download it...

Yaaaaa,Im ready for it to come back!