The turkey is out to thaw...

BlankinLoud said:
I'm laughing because my mother taught me how to make pies when I was a kid. Didn't matter that I was a boy....."It's your turn to cook supper, I'll show you how, but you're doing it."

I learned the hard way that it's incredibly easy to make an ugly looking pie, yet difficult to make a bad tasting one.

Delicious Strawberry Rhubarb pie that looks like it's going to jump out of the pie pan and eat your face?

Just had a flashback.

Roxy13 said:
I made a pie once. A cherry one. I had a bf at the time who insisted I make a pie from scratch for Christmas for him and his kids.

For many women I'm sure that wasn't a big deal, but I had never made a pie. I don't have kids and no one wants to come out here for holidays and what not so I'm not much of a hostess either.

I really considered cheating and buying one, I really did. There is an art to making a pie and I knew that gene was missing in me. But, I did it and made the pie. It was the ugliest freaking pie to ever come out of an oven. I was so embarrassed. I called my then bf and told him I was going to have to throw it in the garbage or give it to the pets

He said no, no, no, you bring it here, those kids are looking forward to it. I was like, you don't understand. They are not going to want this.

Well, I brought it. And the kids looked terrified but we ate it anyway and you won't believe it but it tasted really good

However, I don't ever want to make another one.
Click to expand...

well,you go ahead and install the electric box,hang the bathroom ceiling,etc. and leave the baking to me...nobody can do everything perfectly.

Big Dik said:
I prefer smoked turkey. It stays moist and juicy. Cherry or applewood chips for the smoker.
Click to expand...

I’m cooking it Wednesday morning. Then I’ll de-bone it and put it in a crock pot with chicken broth. Plug it in Thursday morning.

I order mine from the bbq joint. I can cook a delicious, juicy turkey!

I like turkey so I guess that motivates me, but really I can cook rather well for someone who has never owned a cookbook or used internet recipes. And my mother has OCD so she would never let me touch her kitchen appliances so she didn't teach me either.

But, I don't bake. The only person here to eat it would be me and no doubt if I were a baker I'd also be overweight lol.

Peter M said:
He makes that flick! The classic dad who you think hasn't a clue, but whips out an ace at the end.
Click to expand...

If you like the movie, consider checking out the new one they just released. It’s set 30 years after the original, and Ralphie is an adult now with a wife and kids. A lot of the child actors are in the new one as adults, it’s really fun to see them. The whole story is dedicated to Ralphie’s dad, and his love for all things Christmas, a real nice tribute.

Bahahaa... A scene from any given neighbor of mine.

A friend of mine who lives very close to the Canada/US border likes to drive over the bridge to upstate NY and buy groceries. They are often cheaper than on this side.
She has a annual routine of taking a shopping trip the weekend before American Thankgiving and buying a large frozen turkey. They are plentiful and cheap.

This past weekend she drove down and bought her American turkey and some other groceries. When she got back to Canada Customs, they refused to allow her to bring the turkey back to Canada (first time this has ever happened to her), because....they said there are cases of bird flu in the USA.

This excuse defies logic, because the turkey is already frozen and would have been processed at some plant that passed USFDA inspections etc. It's not like she killed it herself or something?
Do Canadian Customs people really think that the US gov't would allow the sale of frozen turkeys that might contain bird flu?????

So she had to fork over the bird for 'disposal'. Of course you can't help but wonder if somebody just wanted a free turkey????

The trick to avoiding this is to put the turkey in the empty pot, fill the pot with water so it covers the turkey, and a bit more. Mark a line at that point.

Then, take out the bird, dry the pot, fill to the line with oil and Bob's your uncle.

I'm way too lazy to do it myself, and I can't do it this good anyways. 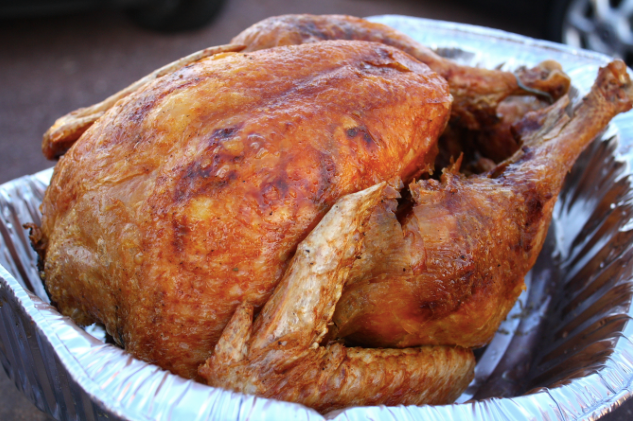 Ok how much did u give them

How to Cook a Turkey With Soda Pop