.
Jeez, Tom, it's just you, me, Edro, and the occasional friendly stranger now.
Thanks for helping keep the lights on!

ehb said:
I don't think I shared this. Had a relative of my biz partner come in about 11 days ago... Long story short, Went and got tested day before yesterday..... Wife and I... Both negative, thankfully. (J&J vax in May)

Gotta go back in a couple of weeks for my long overdue wellness check....all kinds of tests that I detest....
Click to expand...

.
Your negatives are positive news!

Be great to be back to playing out again!

I had the J&J one & done vax but am thinking about getting a booster, just to be on the safe side of this shit... I read where the booster can jack up the resistance by a factor of 8X.... Sooner or later, we'll play out again and I want every edge I can have against the Shit.......

We ain't spring chickens anymore.... We need every edge we can have....

Congrats on the gig. Glad to see buds out playing again....
Click to expand...

.
Agreed with all, Ed, including the good juju Tomward.
We are indeed not 21 anymore, and I'll always say yezz to every edge.
We've got people depending on us.

We had 3 gigs last week. Last Thursday, he fainted, so we had to use a dep for the three gigs.

It's not the first time he had fainted. He had fainted 3 times previously at gigs. The medics were at a loss to find out what it was exactly, but eventually he was fitted with a pacemaker and was on several meds. We thought he was through it all, then he fainted again.

With typical band 'gallows humour', he fainted at a FUNERAL inside a CHURCH. He said when he came round, waiting for the ambulance, the undertaker was standing over him, and said 'I'll get the chalk and the tape measure!' The Reverend who had been conducting the ceremony was holding his hand and said 'I'll pray for you, my son'. Only the Cruisers!

He was checked over at the hospital, and sent home the following day. We had a chat at rehearsal with him yesterday, and then he discussed it with his wife and decided further gigging was not the way to go.

So thanks for everything Eric, you are a diamond. You will always be part of the 'Cruiser family'.
View attachment 557308

And fooling around at an outdoor gig between numbers - hanging my coat on his head when it became too hot to wear!
View attachment 557311

Thanks for everything, Eric. It's been a blast working with you these last four and a half years.

.
I has a sad for him: sounds like they still haven't nailed down what ails him.
.

Got this staring at us.... Headed toward New Orleans area supposedly.... Who knows... 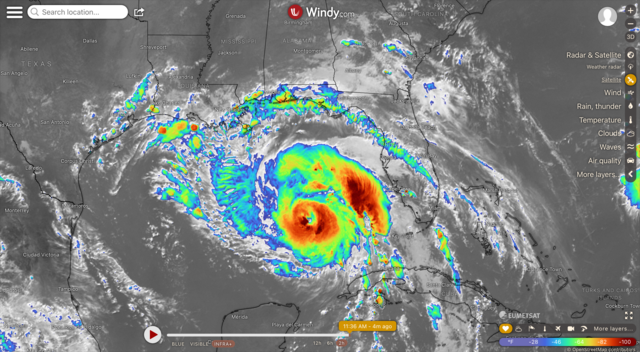 .
Stay safe, big guy!
Blessings on you and yours!
.

ehb said:
If you want to watch it, windy.com is the interface... I think they have iOS and Android apps too, probably...

Best weather interface I've seen.... Play with the bar on the right side of screen for different things... Great weather app... 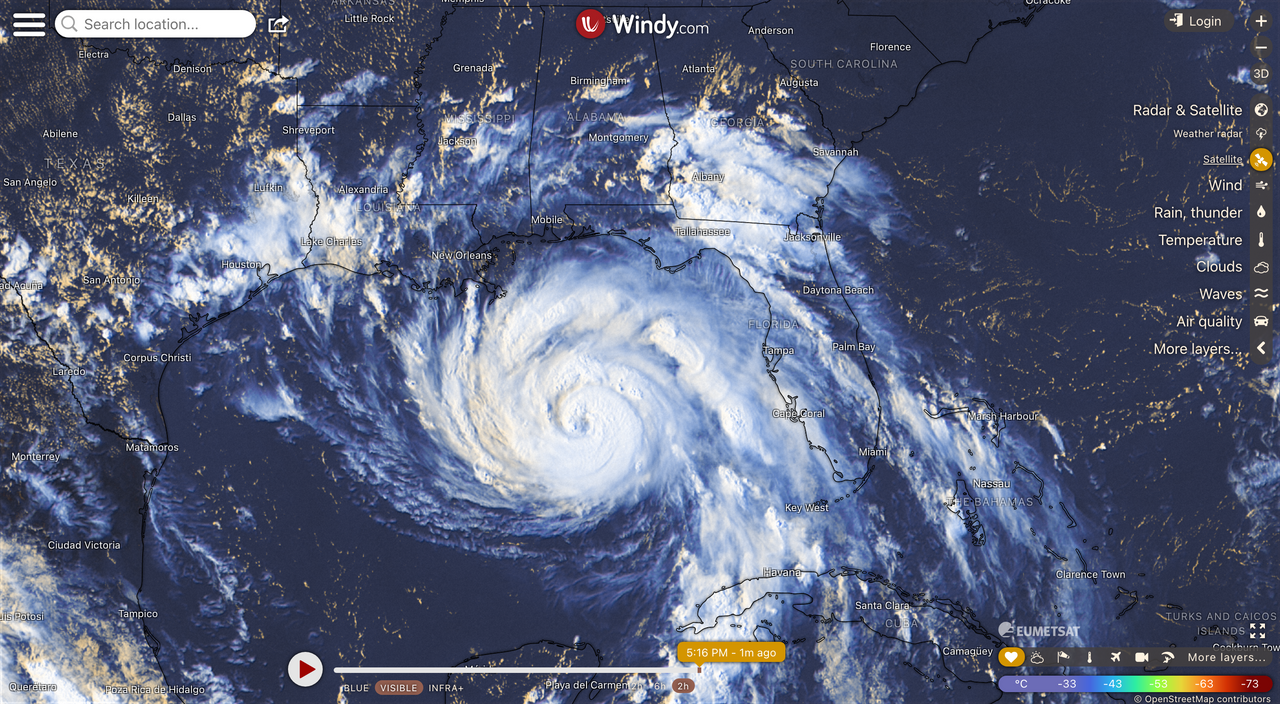 Our new bass player was announced as follows:
'The Cruiser Blues Band (The Cruisers) are pleased to announce that John Venables has accepted our invitation to join us as our permanent bass player. John has recently deputised for us at very short notice, playing 3 gigs in four days. We welcome John into the Cruisers family.'

I have this guy's Youtube page bookmarked.... He chases hurricanes with his team and they have cams all over.....

Just short episodes of rain here right now... We're not even close to the eye though....' Just getting outlying rain bands.

Hope you folks over there comes through in good health. Stay safe!

Hope the best for those folks.... Getting rough for them..... 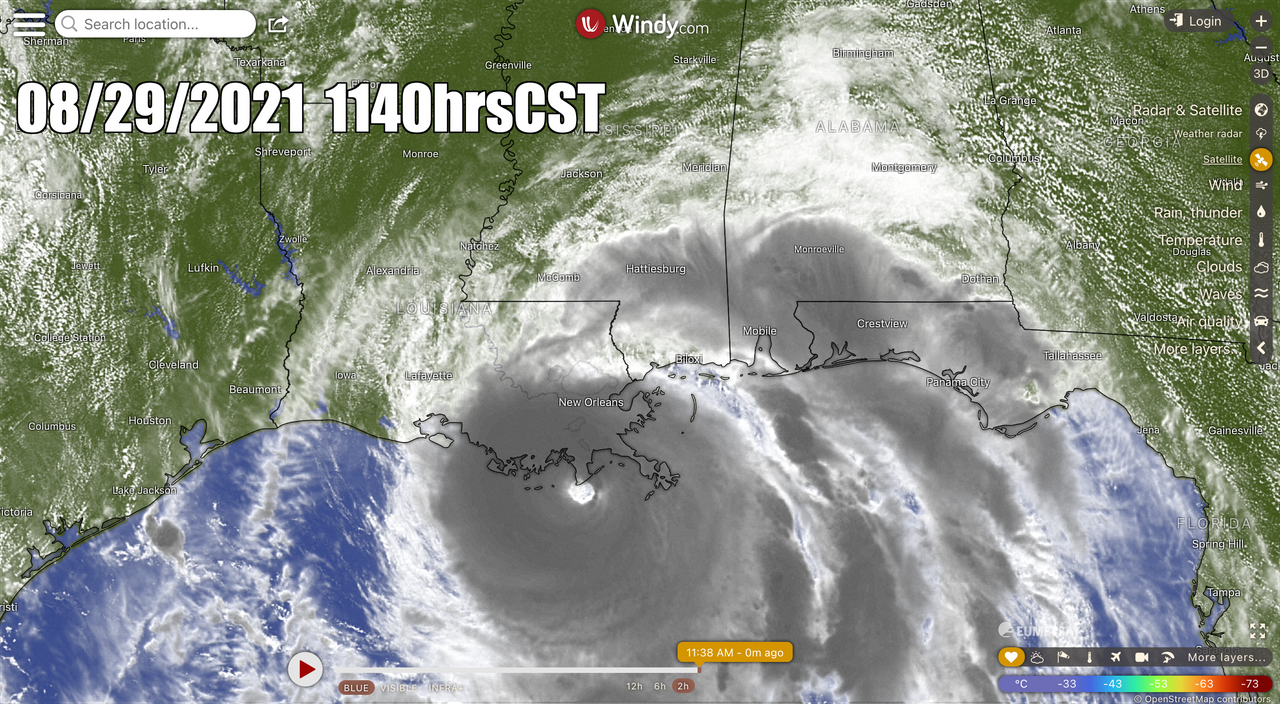 Muther-a-Jeebus!
What am I doing awake at 3:45 a.m.?
My sleep patterns are so hosed!
Well, at least I get to beat Tom in the Good Morning Sweepstakes before I hit the hay.
And for my fellow Americans, Niters, as Robba would say!
.

79standard said:
Well, at least I get to beat Tom in the Good Morning Sweepstakes before I hit the hay.

Sho'nuff you did! Good Morning folkses.

Woke up to some sunshine for a change.

Sunny with no wind this week. Days are getting shorter though. Can't win them all.

.
Drizzly and 66F today.
Not pleasant, but I am grateful for the break from the oven-like humidtiiy.

The local radio says some areas around here may get up to 6 inches of rain between now and tomorrow.
(I think these areas are a bit south of me.)
Some tornadoes possible.

Allergies have been chainsawing me the last month or so.
Loud sneezing fits that make my whole body hurt.

But at least I'm doing WAY better than my housebound guitar buddy Bill,
who texted me today to say he's in the hospital recovering from a heart attack,
and fighting various nasty infections, including c.difficile (the Splort Virus... horrible stuff that can croak you if not controlled promptly).
...as if his multiple myeloma ain't enough trouble, he's gotta put up with THIS?

This guy can't catch a break, dammit!
No visitors allowed, he sez, otherwise I'd be over there boring him with bad jokes.

If any of you could see fit to beam him some good juju, I'd be most grateful.


If any of you could see fit to beam him some good juju, I'd be most grateful.

Grey and dreary mornings seems to be the latest style in late summer here...

79standard said:
But at least I'm doing WAY better than my housebound guitar buddy Bill,
who texted me today to say he's in the hospital recovering from a heart attack,
and fighting various nasty infections, including c.difficile (the Splort Virus... horrible stuff
No visitors allowed, he sez, otherwise I'd be over there boring him with bad jokes.

If any of you could see fit to beam him some good juju, I'd be most grateful.
Click to expand...

C-Diff - been there, done that - and yeah, you don't want to go see him. Highly contagious and horrible.
Sending by best to both him and you . . . .
and to the rest of you as well.