Tell Your First Experience/Exposure to a Les Paul Guitar

Mine was in 1969, I had just been taking guitar lessons for about a year. I had started playing guitar on my own in 1964, (8 years old)... after I saw the Beatles on the Ed Sullivan show, (like millions of other little boys)

I went to a school dance and saw this great band named Surprise. The guitarist in the band, (the only one) had a Black Beauty. This guy was an incredibly accomplished guitarist, he covered all the rhythm and lead parts flawlessly. The sounds he was getting out of that guitar where amazing, (and I don't throw that word around a lot like some people). Oh..I should mention he was playing thru 2 100 watt Marshall heads and 4 4-12 Marshall Cabs!!!......Well anyway I had to get me a guitar like that one.

I didn't even know what the name of the guitar was, Oh I knew it was a Gibson because I could see that from the dance floor, but I didn't know anything else. Except that the Gibsons hanging on the wall in the music store where I took lessons were REAL expensive!!

It took me a little over a year to get my first LP, a 1971 sunburst Deluxe. From then on it's been a life long love affair.

I didn't even know there was a person named "Les Paul"....I just thought it was the model name of the guitar!

My first (carved top) Les Paul was a 2014 Studio Plus. A beautiful guitar( The finish was slightly flawed that I didn't notice for a while, no big deal). Push pull coil cuts didn't impress me. I tried to like the guitar, but, it had no soul. The tone was MAH! Maybe a magnet change would have fixed it, didn't do that then. My modded Epi Les Paul Junior (My first Les Paul shaped guitar) played and sounded better. Sold the Studio Plus and bought a 2016 60s Tribute. Didn't like the dark back, but, loved the Honeyburst front and the P90s. Had to change some magnets. Now it is an awesome sounding and playing guitar.

COOL idea for a thread.

Mine was a contradictory journey. Not sure about my FIRST exposure, but I remember looking in the Sears catalogs in the circa 1978 and seeing the LP copies while listening to "All the World's a Stage" and thinking "Alex Lifeson's Guitar"

May of 1980 just after 9th grade, my Parents ordered me a Sears LP copy and amp. Mind you, I had NEVER had any lessons. It went back a day later.

So, Christmas of '81, I got the best Sears guitar that they had (with Powersound pickups) that happened to be a Les Paul clone in wine red.

It took a while for me to learn that Iommi's model was an SG (the revelation came to me in '82 from a classmate) so that became THE guitar in my mind. HATED Les Pauls--"everyone plays one"--silly high school boy.

My disdain continued until the mid '80s because of Kossoff. Then I started having a tolerance for LPs, but ONLY Gold Tops (not sure why that finish, but hey). Then late '80s I REALLY turned on to Zep (always "meh, they're OK" before that). At that point, ONLY a Honeyburst, CERTAINLY not a freakin' lame Sunburst

Fast forward to December 1995. I called the only Gibson dealer I knew of (45 miles away) because I was REALLY JONESING for a Lester. They only had 1: an ebony LP Standard ("just like Jeff Beck's" said the dude on the phone") so off I go. I bought it on the spot for like $1300 brand new. I preferred a Honeyburst, but AT LEAST it wasn't Sunburst

Oh how I regret selling it

Then I got my first Cherry Sunburst, and that's pretty much it for me now (save for a 2004 Honeyburst Standard

and an '08 Axcess, a Christmas gift from my Beloved Wife in Iced Tea

--her favorite drink is tea

Young kid just getting into music and guitar, Ace was the sh*t.
Then I got into Boston, Foreigner, Styx, Journey. All LP players.
Then the British invasion metal scene. 80's LA metal scene. Shred metal scene. Prog metal scene.
Bought an '84 LP Studio in '84. Sold that and got into the whole Superstrat scene. Still do.
But, always loved the LP look. Started getting back into singlecuts. Picked up my LP Sig T.
Lifes to short to be held down to one type of guitar.
Last edited: Oct 22, 2017

Wanted a Les Paul since high school in the early 70's. Jeff Beck, Jimmy Page, Pete Townsend all influences. Couldn't afford one until much later in life and by then music wasn't as big of a focus. Finally got to pull the trigger this year with a 17 Standard HP and a 18 Classic


And had to have that sound. I somehow managed to get a (what I know now, had no idea then) a plaintop cherry sunburst with Shaw pickups (I recall taking one out and it had a weird circuit board pattern on the back) - it was in perfect condition in a machine gun case.

I was scared of that guitar, it was too good for me and I knew it even then, I was frightened of the thing so I sold it. 22 years later I got my 2nd Les Paul, which I still have now

...I love reading these experiences with this great electric guitar!

Just for a matter of reference, the 71 Deluxe that i mentioned in my original post was $378.99 brand new with the HSC!

...I love reading these experiences with this great electric guitar!

Just for a matter of reference, the 71 Deluxe that i mentioned in my original post was $378.99 brand new with the HSC!
Click to expand...

Do you still have it? When I first read of the Deluxe in an LP book, I was like "meh" but I now think they're the bees' knees. LOVE the minibuckers, pancake, and volute.

The covers of Kiss Alive! and Frampton Comes Alive.

I started to play guitar around the age of 14. My friend and I learned some basic chords on an old acoustic but both of us badly wanted electrics. We were really into Led Zeppelin and GnR at the time so naturally I was gravitating towards a Les Paul style guitar.

I saved enough money to buy a used Lotus. It was a crude LP copy guitar but I loved it. I played from 10th grade to 12th grade, then spent a chunk of my high school graduation money on a cherry burst Epi Les Paul. I played that for a couple of years but ended up trading it in for a Strat < ducks >. Yes, I went through a Strat phase that I've never really gotten out of.

Anyway, I did eventually pick up an actual Gibson Les Paul when I was in my early twenties and in my first real band. It was a used '89 Standard in tobacco burst. I loved that guitar and marveled at how cool it looked, and how much thicker and more aggressive sounding it was in comparison to my Strat.

I was absolutely cuckoo over Zep as a kid, so once I got interested in playing music I wanted all their iconic instruments - especially an orange acrylic drumset and a Les Paul. The first guitar I bought with my own money was an electric blue Arbor, with a Les Paul shaped body (and a Kramer shaped head and black-covered EMG-style pickups). It was hideous, but it was the closest I could get to the real thing at my local music shop, with what I could afford from mowing lawns. If I could go back in time, I'd tell teenage me to save up for another few weeks and get an Epiphone. Ah, well.

My first real Lester was one of those cool sunburst '56 reissues, with P-90s. I bought it in a pawn shop in Kentucky for $450. I later used it as collateral on a $600 loan to pay rent in college, and never saw it again. My second time travel mission would be to go back, slap college punk me in the head and tell him to put down the bong for five minutes and realize that was a special guitar.

Since I've become an "adult," it's been all downhill: I believe I'm on my ninth LP now, and it's by far the best of them all.

As someone from the UK who grew up in the 90s mainly, the whole Kiss thing passed me by totally.
I never heard of them much at all until I joined here, and then it's like, woah some of you dudes really like Kiss!
They always sort of make me laugh with their funny make up and costumes

tbh, the first real Gibson Les Paul I ever played was a bit of a dissapointment. At the time I had a unbranded Chushin Gakki made copy which was by far a better guitar.
To be fair I am comparing one of the best MIJ's to a product of, perhaps Gibson's less than wonderful periods

MooCheng said:
tbh, the first real Gibson Les Paul I ever played was a bit of a dissapointment. At the time I had a unbranded Chushin Gakki made copy which was by far a better guitar.
To be fair I am comparing one of the best MIJ's to a product of, perhaps Gibson's less than wonderful periods
Click to expand...

It's a bit unfair to compare MIJ guitars to Gibson tho, I mean build quality wise, MIJ guitars are far better than Gibson basically any day of the week after all, while Gibson can be quite hit or miss at best of times...

Around 1975 I was 15. My uncle was in a band and as band members often are not making ends meet he moved in with us.
He had a late 60's or early 70's Les Paul and one of those huge Kustoms amps with the tuck and roll covering.

We had a pretty smal house and that set up dominated the living room. I tried to play it once and managed nothing
more than a terrible cat being stepped on squeal. I did rattle the windows and piss off the neighbors though!

cherrysunburst00 said:
Do you still have it? When I first read of the Deluxe in an LP book, I was like "meh" but I now think they're the bees' knees. LOVE the minibuckers, pancake, and volute.
Click to expand...

Well, at least you got something nice that you still have

Ace.
Les Paul.
Nuff said.
I wanted one ever since. 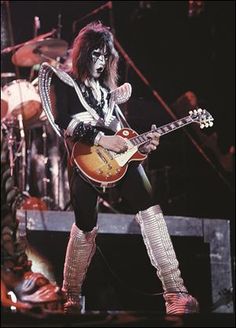 aw' man thats beautiful, always had a soft spot for Guilds
You must log in or register to reply here.

My experience with Les Paul's

Got my first Les Paul
2