All the answers you want, need, or desire can be found with the search feature. Trust me on this one.

For what it's worth...mine is all the way down and I use tens. But then I'm as far from an expert as there is. My guess is that it really doesn't matter all that much either way; However you like it. Mine's all the way down and I top wrap 7s

It don't hurt the runnin' none

Instead, for example, use Google and type in the search words: tail piece height mylespaul

LP86,
You'll probably get different reasoning for every response. I think the idea of having the tailpiece as low as possible is so the studs make the most amount of contact with the inserts. This will theoretically lead to less movement, more sustain, etc. Furthermore, having the tailpiece low creates more of a break angle across the bridge saddles which, again theoretically, leads to less movement, more sustain, etc. However, you don't want too much break angle to where the strings make contact with the edge of the bridge. This will, again theoretically, lead to less sustain, more wear on the bridge, and possibly the dreaded bridge collapse! So, it sounds like your tailpiece is set-up optimally! Just don't ask about Top Wrapping!

Opinions are a bit like arseholes...everyone has one and everyone but their own stinks.

Try different settings (tail down tight, up a bit, down tight and topwrapped, etc, ad infinium...). Find what works for you.

Thanks for the help guys.
much appreciated
I don't understand what is ment by proper string break angle to the bridge.

LesPaul86 said:
Thanks for the help guys.
much appreciated
I don't understand what is ment by proper string break angle to the bridge.
Click to expand...

Me either, but I've never let a lack of knowledge get in my way

XRay;7678677 said:
FYI - the best way to see if there's a previous thread about a topic here is don't bother with the SEARCH function

Instead, for example, use Google and type in the search words: tail piece height mylespaul

I did the whole google search thing. which is why I said in my first post that the things I read online seemed to contradict everything else I had read previously. which is why I asked the question here.

I changed my strings last week and I thought I'd do the whole top wrapping thing because, hey why not?

I slammed my tailpiece down as low as it will go and set to work.

The difference I noticed is...

LesPaul86 said:
Thanks for the help guys.
much appreciated
I don't understand what is ment by proper string break angle to the bridge.
Click to expand...

It usually refers to lowering the tailpiece as low as possible, but not so low that the strings actually touch the back edge of the bridge. 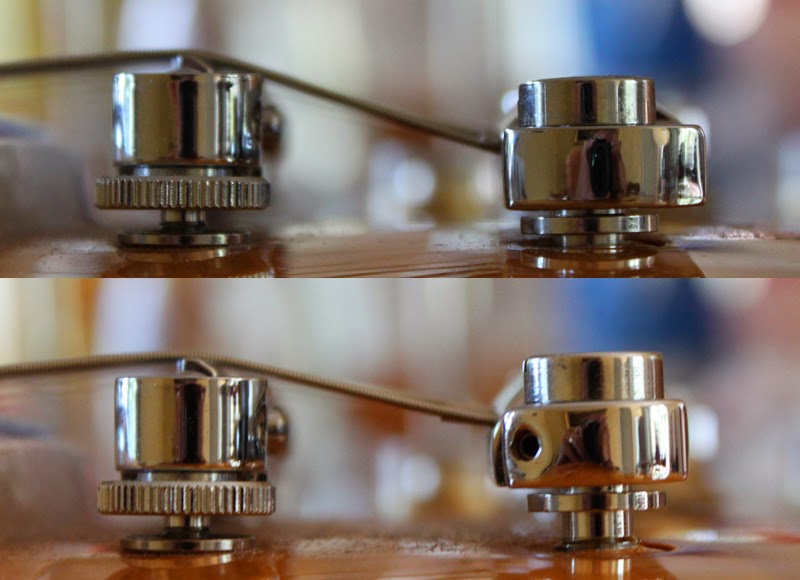 FWIW, I just lower mine all the way, but I also have ABR-1 bridges on all my T-O-M guitars, so they are less likely to be in the way.

LesPaul86 said:
I did the whole google search thing. which is why I said in my first post that the things I read online seemed to contradict everything else I had read previously. which is why I asked the question here.
Click to expand...

I like doing it this way. Google this (without quotes of course). See example below. No space between "site:" and "mylespaul.com". Then space. Then type what you want to search for.

If you have Google set (it's set by default) to remember your searches, after you do it once then all you have to do is type in the letter "s", the "site:mylespaul.com" will come up. Then delete your last search term and replace it with whatever you are looking for today.

The recommended method is that you raise the tailpiece just enough so the strings clear the back of the bridge.

However, this often raises a few points of discussion;

Some say if you bolt the tail right down, you get better sustain, as there is better mechanical coupling between the tail and the stud sockets.
Personally I don't buy this. If you think mechanical coupling is that crucial, then you can always add some spacers. Faber make them.

Some say if you bolt the tail right down, it can, over time, make the bridge bow in the middle. I have had this issue on a 1980 Custom, so I believe it. Others have never had this issue.

Some say the higher the tail, the easier it is to bend strings. This is because you are reducing the angle of the strings over the bridge, which reduces downforce. Some take this to extremes by 'top wrapping' the tail which allows the tail to be bolted right down whilst still giving a shallow string angle over the bridge.

And finally - every guitar is different, so what works on one may not work as well on another.

I have three Les Pauls, one is top wrapped and t plays so well that I will lower the tailpiece and top wrap the cherry sunburst les Paul

I prefer wrap-around bridges. But when I realized the only way to get a wrap-around, and not a TOM, for a Special, I'd have to drop $2,000 on a Custom Shop. Went with a regular production Special, screwed the tailpiece all the way down, and top-wrapped my 10's. I'm not saying that top-wrapping is magical, or is the end-all, be-all. But it works for me.
You must log in or register to reply here.
Share:
Facebook Twitter Reddit Pinterest Tumblr WhatsApp Email Link