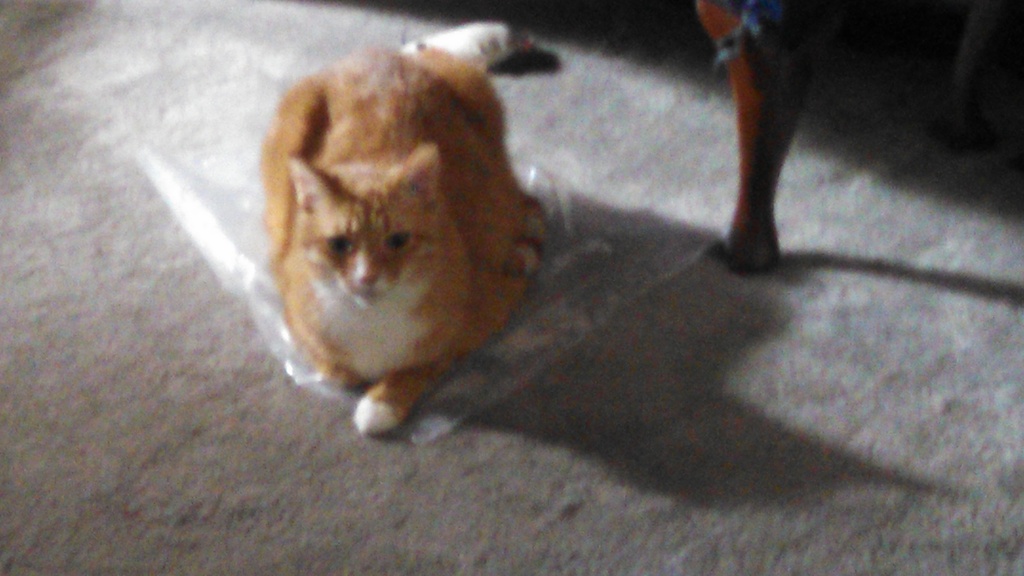 Our great friend Sir Fletcher or Fletch as we usually called him..passed last night in his sleep. 15 years old and had gotten thin.. He would come to my desk and demand pets..and get a massage.. Last night was the first without him. My son took it hard as Fletch was always by his side..
We buried him by his brother and sister in wooden box I made..as with his sister and brother..under a giant Eucalyptus tree I planted 20 years ago. All three have a rock mound and a JFK "perpetual" flame solar light and flowers..of course..plastic..

He had a dignity..never had a toy..never really played..we always called him Sir as he did what he wanted and if he wanted pets..he would bump his head into you..then when he was done..went on his way.

The only thing he ever seemed to like to "play" with...plastic wrap !

Even as a kitten we could here him in pantry ripping plastic off 6 packs of bottled water..or stealing zip locks.. As you can see..he's take it and sleep on plastic bag..

So we buried him with his plastic bag in his paws..

We have one cat now.. We got him so our 2 year old grandson had him after Fletcher's sister died..and Munchie (Grandson nickname) loved Lint.. She died in my wife's arms..she had adopted wife since she was a kitten.

The new "litttle cat" E..what out then 14 month old GS called him came from rescue. Grandson and he bonded at the rescue..
The minute we got him home he ran to Munchie laying on our bed..and they have been inseparable since..

Oh yeah..E is very easy going..lets Munchie lay on him..and as this 8 month old cat is now about 15 LBS and growing..probably a Maine Coon..

Sorry. I know how attached one can get to a pet. They become much like family pretty quick. It takes time but you'll heal eventually.

Sorry for the family loss Parts......

RIP sir Fletcher, Sorry to hear of your loss, It's a tough time to go through.

My little furry shadow passed a couple of years ago and I still miss him. When a cat loves you they really love you.

Very sorry to hear this.

So sorry, Parts. Cats and dogs are family, not pets.

Sorry about your cat, Parts. Been almost two years since our cockatiel passed away (@23), and still not quite used to him NOT being here.

So sorry for you loss man, breaks my heart

Sorry to hear this, losing family members is never easy.

Sorry for your loss.

Losing pets is the worst.

You are taking it much better than I would.

You all have my heartfelt compassion. Especially your son, as I am like him. Devastated when I lose one!

So sorry to hear. I am a life-long cat hater. However, about 10 years ago, my kids and ex (against my wishes) rescued three cats. We lost one, early on, and I was surprisingly crushed. They became a big part of our lives and while I still might be technically "Not a cat person" I do love these cats.

My condolences to you and your family.

Sorry to hear about Sir Fletcher. He had a great life, may he RIP.