Pop singing sensation Shakira was attacked by a sea lion in a dramatic incident while on a recent nature tour off Cape Town, South Africa. She believes the pinniped may have mistook her shiny BlackBerry for a fish, and says her brother saved her life.

Shakira, who is from Colombia, described the attack this week on her Facebook page:

"This afternoon I happened to see some sea lions and seals. I thought to myself how cute they were so I decided to get a bit closer than all of the other tourists and went down to a rock trying to pet them doing a baby talk while taking pictures.

"Suddenly, one of them jumped out of the water so fast and impetuously that it got about one foot away from me, looked me in the eye, roared in fury and tried to bite me. Everyone there screamed, including me.

"I was paralyzed by fear and couldn't move, I just kept eye contact with it while my brother 'Super Tony' jumped over me and literally saved my life, taking me away from the beast."

Sea lions can be territorial and aggressive, and their bites can spread painful and serious disease.

Shakira added: "We both got our hands and legs scratched by the rocks while trying to protect ourselves. I believe what happened is that it confused the shiny reflection of the BlackBerry I was taking these pics with, with some sort of fish.

"It probably thought I was teasing it with food and then taking it away from it. Wow! It's funny that only half an hour before I was complaining to my guide Andrew that I never get to see wild animals up close on adventurous trips.

"Oh well, I can't say that anymore!! Now I'm off to see some penguins! I hope they are a bit more friendly!"

The incident is being reported and made light of by some publications.

Reports ABC News in a blog post: "Clearly, Colombian pop star Shakira and a vivacious sea lion where not 'meant to be together.'

Judging from Shakira's Facebook photos (see top image), the penguins were, indeed, much friendlier than the sea lion, and more gracious in her company.
Click to expand...

None of the (not really important) pics work on mlp.

I guess that is what happens when ou mess with wild animals though...

Edit: Lol posted this right when blues4u did

Since I posted the same thread at the same time as Blues, how about a shark picture instead? 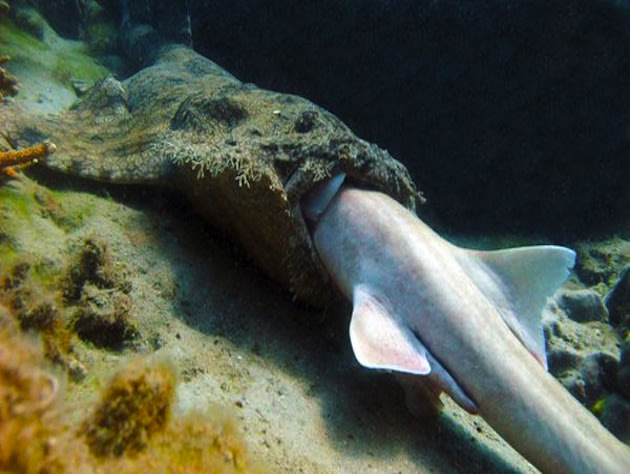 Getting eaten would suck.

The shark doing the eating is a wobbegong, a bottom-feeder native to Australian waters. Cool stuff.

At least she stills looks hot.

Don't blame him, I'd try to take a bite outta that too!

the sea lions hates her music

Dam it with the shakira threads, she was hardly even touched by one, that lion should have raped her back to the deeper part of the ocean.

nicolasrivera said:
Dam it with the shakira threads, she was hardly even touched by one, that lion should have raped her back to the deeper part of the ocean.
Click to expand...

For real? Your advocating rape?

geochem1st said:
For real? Your advocating rape?
Click to expand...

By a sea lion!, don't take it seriously or would ya'

I wouldnt mind biting her ass myself

all males admire & want her

I thought to myself how cute they were so I decided to get a bit closer than all of the other tourists and went down to a rock trying to pet them doing a baby talk while taking pictures
Click to expand...

Uhhhhh, OK, yeah. Go ahead and pet a wild animal, one with some serious MEAT EATING type teeth. They have those teeth for a reason.

Maybe she can go to Antarctica and play with the leopard seals next.

We have a potential Future Darwin Award candidate here.

Hmm, you'd think that the baby talk would make them cool with being petted

Next stop, wolverine petting zoo, followed by a romp with the grizzlies

I'm bummed that no one picked up on my pun about "bottom-feeder."
You must log in or register to reply here.

We almost had a Celebrity Darwin Award winner-
2

Lion shot and killed after escaping