It appears that the Russian manufacturing firm, Kalashnikov-- which, until now, was famous mostly for their production of the ubiquitous AK-47 assault rifle-- has been working up an electric car. The firm claims that this vehicle will give Elon & Co. serious worldwide competition.

The company claims that their product will be considerably faster than Tesla's vehicles, and says that these cars they're building feature a range of 220 miles (350km) on a single charge.

And so they proudly unveiled their prototype the other day. To say that the reviews were mixed would be an understatement.

While some think that the car looks cool in a retro kind of way, yet others have complained that it has a drab, clunky, almost Soviet-era appearance to it. And apparently the eggshell blue the demonstrator model arrived in was not universally well-liked. But eh: that's just paint.

So here it is. This is the Kalashnikov CV-1: the car that will supposedly give Tesla a hard run for its money: 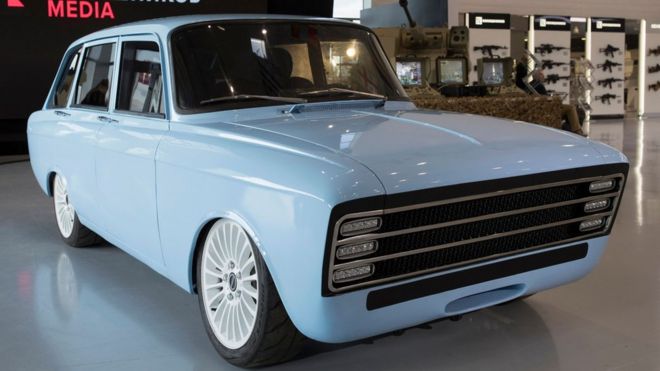 Upon viewing this baby for the first time, all I could think was that it sort of resembled a compact version of the Wagon Queen Family Truckster that Clark Griswold got stuck with in the movie "National Lampoon's Vacation". Seems like if you chopped off about a foot from each end of the Family Truckster, you'd have more or less the same look going as the CV-1. But that's just me-- though I've noticed that others are even more underwhelmed by the appearance of this new Russian conveyance than I am. One person commenting on Kalashnikov's Facebook page told them, "Your tanks are great, but it would be better if you stayed away from cars."

I should add here that Kalashnikov makes more than just rifles and this new electric car of theirs. They have a clothing line going, they manufacture umbrellas and myriad other common consumer goods. So, even if this thing with the CV-1 doesn't work out, they should still be around.

But man: they're not exactly batting .500 here. Last week Kalashnikov also unveiled a new robot they built, which they are calling "Little Igor". This is a 13 foot tall, 9,000 pound manned robot which Kalashnikov says would be useful for "carrying out engineering and combat tasks". 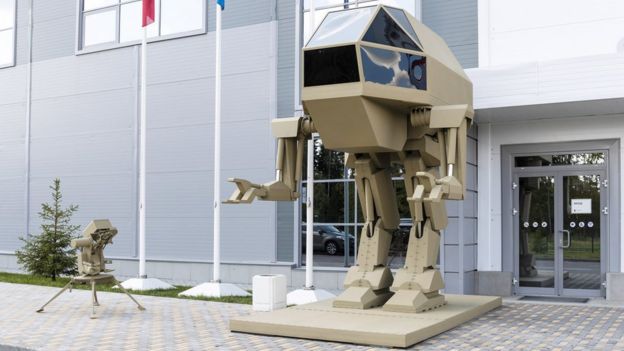 I don't know jack about combat robots, but apparently those who do have openly jeered at Little Igor as being outmoded, crude, clumsy, and so forth.

My guess is that these critics might know what they're talking about, though. Rather than to respond defiantly, Kalashnikov's response to the laughter the robot was met with was to say that they hope to display an improved version of Little Igor by 2020.

That EV car looks like a Resto mod Lada. My dad had a Lada when I was a kid. Had a manual choke and everything.

The battle robot looks like a failed artist rendition of the ED-209 droid from Robocop.

Now I’m thinking about Christie Brinkley in a swimming pool....

I wonder if Browning should come out with a coffee maker.

When is someone going to make an affordable jet pack? No more commuter traffic. I’m flying to work.

The designer went to the same school as Leepu Nizamuddin Awlia (you have to look that one up).

If you can drive it safely while completely shitfaced, it'll sell like hotcakes in Soviet Russia.

does it come with a dash cam ?

I don't know Rob, I think that if China is backing them up they'll get to those numbers. If you look up China EV reviews on YouTube you can see a pretty good variety of cars.

Even though Russians seem to keep on going with the vintage stuff, I appreciate them. Some of these newer car designs really turn my stomach.
L

I heard the body is made from a substance similar to that of a 'super ball' - making it ding and dent free. And, if you have an accident, it bounces you 2 blocks away from the scene.

The electric Lada looks pretty cool. Probably more affordable than a Tesla too.

effing russia, that place is the new japan for weird.

Byton, Fisker, Jaguar, Porsche, those are the "potential" telsa killers of note, this russia stuff is Funday Friday!

Does it have vodka bottle holders in the console?

I think it actually looks cool in a retro sort of way.

In fact, if it gets any cooler I might have to defect.

Sweet Christmas! I thought this was satire.... seriously?

See what I meant about mixed reviews?

Some seem to love it, others seem to hate it.

And I neither love nor hate it, though it does remind me a bit of the Family Truckster...

But then: I'm a motorcycle guy anyway. I haven't cared much about any car whatsoever since I got bored with that Supra I have sitting out in the garage...

I thought Nicolai Tesla was Russian?

I have Russian electrics in my gear.
PIO caps and tubes.
The later driving my amps quiet nicely.

New Jersey says no to Tesla - and to Democracy
2 3

Are red cars are ticketed for speeding more often than vehicles of other colors?