real LP or best fake ever?

If I needed more evidence to confirm that it was stolen this is probably it: It came in a fake Gibson case.

My guitar tech told me that this case probably isn't a real Gibson case. He said he's never seen a case with the Gibson logo on the neck end like that. They always put the logo on the fat end. So I guess it was probably stolen from its stand at a gig, or something like that. Sigh....

My theory, and it is only that as I have nothing except my experience to base it on, is that he guitar was re-necked by a Gibson-authorized repair person who attempted to hand-stamp the serial number into the back of the headstock. Not sure why the headstock was left unfinished. I think it does devalue the guitar, if only because now it is a 'story' guitar. you know, one of those where you have to explain that something unusual happened but it is still a Gibson. And they buyer says, well yeah but I can just buy another Les Paul without stories.

Left Paw said:
My theory, and it is only that as I have nothing except my experience to base it on, is that he guitar was re-necked by a Gibson-authorized repair person who attempted to hand-stamp the serial number into the back of the headstock.
Click to expand...

Doubtful. The OP updated with;

“I did contact Gibson and unfortunately they had no record of the serial number.”

That serial number doesn’t match to any guitar. Now, I wouldn’t go crazy with the whole “this guitar is 100%, for sure stolen and I can never play again without feeling like sh!t”. While that seems like the most logical conclusion, we all know that in this world, people do all sorts of stupid things for all sorts of stupid reasons that we couldn’t even fathom.

There may be some completely idiotic reason why someone did this and maybe in the process, they mucked up one of the numbers. I wouldn’t write the guitar off. Play it and give it the love it deserves. If someone shows up one day claiming as their own, then proceed accordingly but in the meantime, don’t assume maliciousness when it could likely be simple stupidity.


StudioFan said:
I would bet the whole serial is correct .
Click to expand...

As sad as it is that this guitar was likely stolen, that doesn't make it any less yours. You bought it in good faith, and it's likely that the previous owner did as well. Who knows how many times this guitar has changed hands over the last 10 years with no one being the wiser. There's almost zero chance that the original owner is going to suddenly come forward to reclaim it. Even if he did so, it'd be tough for him to prove the guitar was ever his since the original s/n is gone and there aren't any really obvious identifying marks on the unaltered part of the guitar.

I say play it and enjoy it. If you ever do want to sell it, just disclose that someone sanded the back of the headstock and reapplied an incorrect s/n. There's no way to know for certain that the guitar was actually stolen, so you aren't required to say that it was. If anyone thinks it's not a legit Gibson, just show them the email you got from Gibson stating their opinion that is legit. Maybe you have to sell it for less money, or some people will pass based on the headstock issue, but I'm confident that most people won't care all that much about it. The average player tends to not care about most of the things that we care about on guitar message boards.

Tanqueray said:
As sad as it is that this guitar was likely stolen...
Click to expand...

Again, we don’t know that.


Tanqueray said:
...but I'm confident that most people won't care all that much about it. The average player tends to not care about most of the things that we care about on guitar message boards.
Click to expand...

On the contrary, I think most would care.

An alien from another world owned this guitar and inscribed his social security number on the back of the headstock. Realizing he can’t play like Jimmy Page on the dang thing he removed his personal information and tried to fix the digits the best he can and put it on ebay.

Don’t mind me I’m just being an ass

I guess someone gave this one a special serial number !

Someone did give it a serial number, just not Gibson.

Careful with the green font, some folks take exception to that.


On the contrary, I think most would care.
Click to expand...

That's why I said "was likely stolen" instead of just "was stolen." Based on what we've discussed in this thread, I believe that it probably was a stolen guitar, and the thief (or thieves) sanded off the serial number and put a new one on to hide his crime when he sold it. Maybe that's not what happened, but it's not as though people are coming up with theories that sound more plausible.

As far as people caring vs not caring, I have sold many guitars via CL, ebay, and reverb. Most people I have dealt with are just guys who like playing and don't really fret over cosmetic issues. They're similar to the OP, who purchased the guitar in question and was seemingly happy with it for four years before coming here and realizing that something might be amiss with the serial number. Most guitar owners don't post on guitar message boards like this one. Only a handful of guitarists that I've met have even heard of places like MLP. Hell, many of the guys who work in guitar shops that I've been to can't tell the difference between a Gibson and a Chibson unless it's a particularly bad forgery. So yeah, I think most players aren't going to think twice about the serial number.

It looks like for whatever reason the back of the headstock was sanded down. Possibly to remove the original SN. The finish looks different from the neck as well as the funky part where the neck meets the headstock. (Just me speculating) 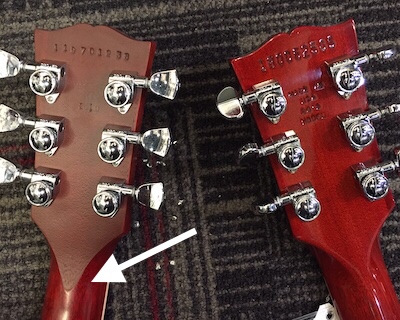 BadMojo said:
It looks like for whatever reason the back of the headstock was sanded down. Possibly to remove the original SN. The finish looks different from the neck as well as the funky part where the neck meets the headstock. (Just me speculating) If you want to snap the headstock clean off and toss it, thats always an option man

Seems good enough as it is to live with, devalued big time
I'd ask for a partial refund from the seller, so they can cover their own ass without any profit and you can pay for that headstock repair

I figured as much lol. I don’t have time to read every post. I just look at what OP said and add my 2 cents.

HardCore Troubadour said:
Someone did give it a serial number, just not Gibson.

Careful with the geen font, some folks take exception to that.

Well, some comments.
1) Does the guitar sound good? That is the real question!

2) The LP is not a fake what I have detected from the images.
3) All the rest is pure speculation .... Maybe a 'hobby luthier' just wanted to have a lighter peg head an sanded it... or it is a 'grey re-import'. We hat that in EU in the '90s for several reasons. They changed the serial number for those guitars. I have a Firebird from '91 with the same issue... or....or ...or.
Only topic 1) matters

S
All gold LP at auction - is it real?