(CNN) -- Country music star Randy Travis, who pleaded no contest to public intoxication following the Super Bowl in February, was arrested again Tuesday after being found naked, smelling apparently of alcohol and lying on a remote stretch of roadway in northern Texas just before midnight, authorities said.

He was arrested for driving while intoxicated and felony retaliation, after allegedly threatening to fatally shoot highway patrol troopers who responded to a concerned caller who notified authorities of "a man lying in the roadway" Tuesday. The DWI offense is a misdemeanor, authorities said.

While in custody, Travis allegedly threatened "to shoot and kill the troopers working the case," Sgt. Rickey Wheeler of the Grayson County Sheriff's Office said Wednesday.

Travis allegedly refused to take a blood and breath test, and was later forced to submit to a judge's order for a blood specimen taken at a nearby hospital, Wheeler said.

Authorities said he had been in a one-vehicle accident and was released on bond Wednesday morning.

It's not clear whether Travis was injured in the accident, though his mug shot revealed a bruised right eye and several abrasions on his face.

Neither Travis nor his representative could be immediately reached for comment. 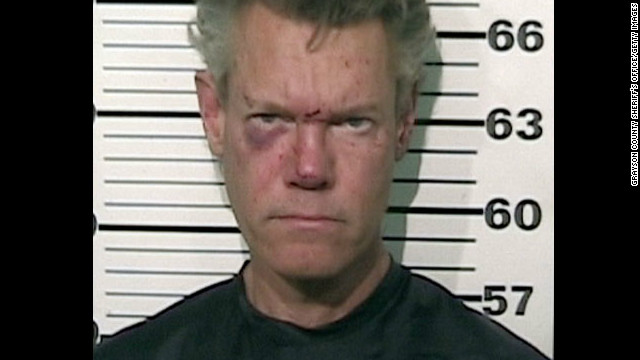 Yep, there's some lyrics for a new country song somewhere in this story.

Livin' the life. What a maroon.

Rich said:
Yep, there's some lyrics for a new country song somewhere in this story.
Click to expand...

That was my thought when I saw the thread title....

garweft said:
That was my thought when I saw the thread title....

Your avatar made me laugh. We should all change to that just for Jim.

On second thought, I stick with Gomez.

There is a thread on TDPRI, talking about his ex's and his history. She was his manager, and bailed him out of jail, from a burglary complaint, to start his career. She was 36, he was 17.

I ain't looked all this up, so I don't know the whole story.

It sounds like he needs a lot of "management".

Edit: Hmmm, if one can believe wikipedia, it was quite a sordid affair.

Just because you have fame and fortune doesn't mean you're not trailer trash!

Lookin a fool with his pants on the ground.

Would it have been better if he were found telling the truth, Naked in the road.

Any word on if he's hung like a shrew?

Hopefully we find Randy Newman lying naked in a road.

But that car? C mon!

Country is so cerebral.

Randy Travis was my father(a business manager)'s client for a while. Oh the embarrassment!

His dog died, just the other day, and left him all alone.

The phone company dropped by, to disconnect his phone.

Dude can party, he be rollin they be hatin'

He was found lying in the road naked and threatened to shoot and kill the police officers? Where the hell was he carrying his gun? I think that's reason enough for a full cavity search which might explain the look on his face in the mugshot.

Randy Travis (How the Mighty Have Fallen)
2 3

Teens and speeding, will it ever end?
2