My chain is changing from time to time based on pedals acquired or sold.. my current chain like:

I am not a pedal fan so I don't use many. However, when I am not using my Kemper, the setup for an amp with no FX loop is:

If I have an amp with a loop, I will put the Dispatch Master in the loop. Depending upon the amp feature set and how it responds to clean boosts, I may also put the Coco Boost in the loop.

there's a reason I can get by with it....I am a drummer that thinks he can play guitar....I play little to no lead what-so-ever....straight rhythm....I can get a perfect rhythm tone this way.

there are only 2 kinds of music (and people), good and bad.....I play the first kind.

I will admit, sometimes I like a little OD in line, but most times, I can get exactly what I want through a good tube-driven amp.


garybaldy said:
Whereas I fully appreciate the sound of an LP straight into a cranked (non - master vol) tube amp I personally could not do what I do without at least a few pedals eg OD,Chorus,delay.
What kind of material do you play? Do you gig?
Thanks
Click to expand...

Telecasters: Guitar - Digitech RP-1 - Hartke Hydrive 210 (250 watt bass amp)
Everything else: Guitar - MXR Custom Badass modified OD - Fuchs Plush Drive - Boss GE-7 (set for cleanboost) - Fractal AX8 - Boogie MKIV combo and 1x12 extension cab, and Boss DD-500 in the loop. AX8 has 2 dedicated pedals for wah and volume.
I wouldn't call any of this "a pedal board", it is more like a "strewn all over the floor"

Don't have a pedalboard anymore.

As of late, the usual order has been: I have added my muff back into the mix after modding it with BC549 transistors the other day, and I also just picked up the Rowin Dumbler and Plexion so I am testing these guys out. The Plexion is pretty decent.
Last edited: Dec 7, 2019

I now have 2 separate rigs in my house.

The first one, it I Hotcake > Ehx metal muff > Tc Electronic mini booster > Ravish Sitar > Boss ME50 > Boss Loop station.
These pedals go into either a Blackstar Fly 3 or a Vox MV50.

The other rig is basically a Mooer Noise Killer > Tone City Golden Plexi.
These go into a Fender Mustang GT.

Having two rigs means I get the best of both words, excellent digital amp tones and digital effects with a Plexi overdrive boost when soloing, and a variety of pedals to enjoy with an amp with clean headroom.

More than I need. Back on the day I used my volume knob and a 2203 lol I pretty much put the main pedals in order of least tone-suck for my amp, and the tuner and noise gate last before the amp to cut noise most. The boost and volume pedal functioned better in the loop. There's a foot switch for the amp, too. It's not a super complex board, but 2 full-size expression pedals really add weight and bulk.

However, after changing the way I use my amp to get better touch sensitivity and response from volume changes on the guitar, I will most likely remove the OD, clean boost, and volume pedal. I have noise gate mostly because of how noisy the OD is, especially at a couple of specific venues we play often. The OD on my amp is much less noisy, so I may be able to remove the noise gate, too. If so, I'll get a mini wah and downsize the board itself, which would be nice. Nice layout. Interesting that you have the modulation/delay effects ahead of the amp, rather than the loop.
I'm assuming you did that to get them ahead of the gate so the amp isn't always "swishing"?
The new Cockblocker has dual i/o and puts a gate on both sides of the preamp.
R

CB91710 said:
Nice layout. Interesting that you have the modulation/delay effects ahead of the amp, rather than the loop.
I'm assuming you did that to get them ahead of the gate so the amp isn't always "swishing"?
The new Cockblocker has dual i/o and puts a gate on both sides of the preamp.
Click to expand...

I wish I was that thoughtful! Initially, I put them all before the amp cause I was too lazy to do the 4-cable thing. Then I found put out the Fender Prosonic's effects loop is really hot and doesn't always play well with some pedals, so it still made sense to keep them up front.

I did end up pulling the boost, Ernie Ball VP, Ceybaby, and the MXR overdrive off the board. I found a Morley MWV (mini wah/volume combo) and downsized. The optical wah certainly sounds different than the Crybaby, but it's well-built and compact. I like it so far, but we'll see once we get back to rehearsals and gigs in a month or so. Robert Parker said:
I wish I was that thoughtful! Initially, I put them all before the amp cause I was too lazy to do the 4-cable thing. Then I found put out the Fender Prosonic's effects loop is really hot and doesn't always play well with some pedals, so it still made sense to keep them up front.

I did end up pulling the boost, Ernie Ball VP, Ceybaby, and the MXR overdrive off the board. I found a Morley MWV (mini wah/volume combo) and downsized. The optical wah certainly sounds different than the Crybaby, but it's well-built and compact. I like it so far, but we'll see once we get back to rehearsals and gigs in a month or so.
Click to expand...

Somewhere in storage is my original board, which has the original Morely WVO. All I really used it for was volume except on a couple of Metallica songs that we did in the late 80s. It worked great as a volume pedal and had a very smooth sweep, but as a wah, it just didn't have the right feel... the throw was just too long and getting a really good Crybaby pace out of it was like riding a bicycle. As a volume control, the long sweep was great... a nice extension of the guitar's pot, but as a wah, its best use was to fine-tune a "half cocked" tone like MSG.
Also on that board was an Aria compressor, some cheap no-name (maybe Banana?) needle tuner, and the rest was DOD.. chorus, flanger, delay, and Grunge.
Early 90s, I shelved the board and moved to just a single OD... either a DOD Classic Tube or ProCo Rat, driving a Blues Junior.
I never knew that I needed an OD on the board, I was running it through a channel-switching amp.. but in all honesty, I always played with too much gain and compression, and really sounded like shit.

I’ve been using modeler/multi-effects units exclusively for a good 7-8 years now and I’ve since sold off all of my pedals, however here are photos of the last board I used, which I think was the third one I constructed as my needs evolved.

I had it wired for 4-cable mode such that the wah and overdrives were directed to the amps input, while the time-based effects were routed through the amp’s effects loop.

In front of the amp, the chain was:

The effects loop was:

If I happen to be using an amp which didn’t have an effects loop, then I could simply plug a jumper cable between the jacks labeled “TO AMP” and “EFFECTS iN” and then connect the “EFFECTS OUT” to the amp’s input. This put all of the effects into a single chain with the time-based effects at the tail end.

An issue that I had with the first pedalboards I constructed was finding a case to carry them in, so when I built this one, I made a removable hinged cover for it:

For the past year and a half, the Boss GT-1000 has been my modeler of choice which I run it straight to the mixer, so no amp on stage, just an FRFR monitor. I have dozens of patches that I use, most of which generally have a chain that is similar to the effects path noted above. The advantage of the modeler is that the chain can be different for every patch, you can have parallel paths, and the settings of every effect can be unique to each patch. If I have a patch dedicated to a song, the tempos of the delays, tremolos, phasers, etc are all sync’d to the song’s BPM. On my general use patches, I have a tap tempo button that syncs all effects to the tapped tempo. It’s something you just can’t do with individual pedals.

I never thought I’d give up my dedicated pedals, but I am so spoiled by the convenience and great tone that I’m getting from this modeler, that I don’t see myself ever going back. I started selling off my pedals last year and the all gone except for one Fulldrive pedal.

Here is my current pedalboard which simply consists of the GT-1000, a Digitech Drop, and a couple of power supplies: 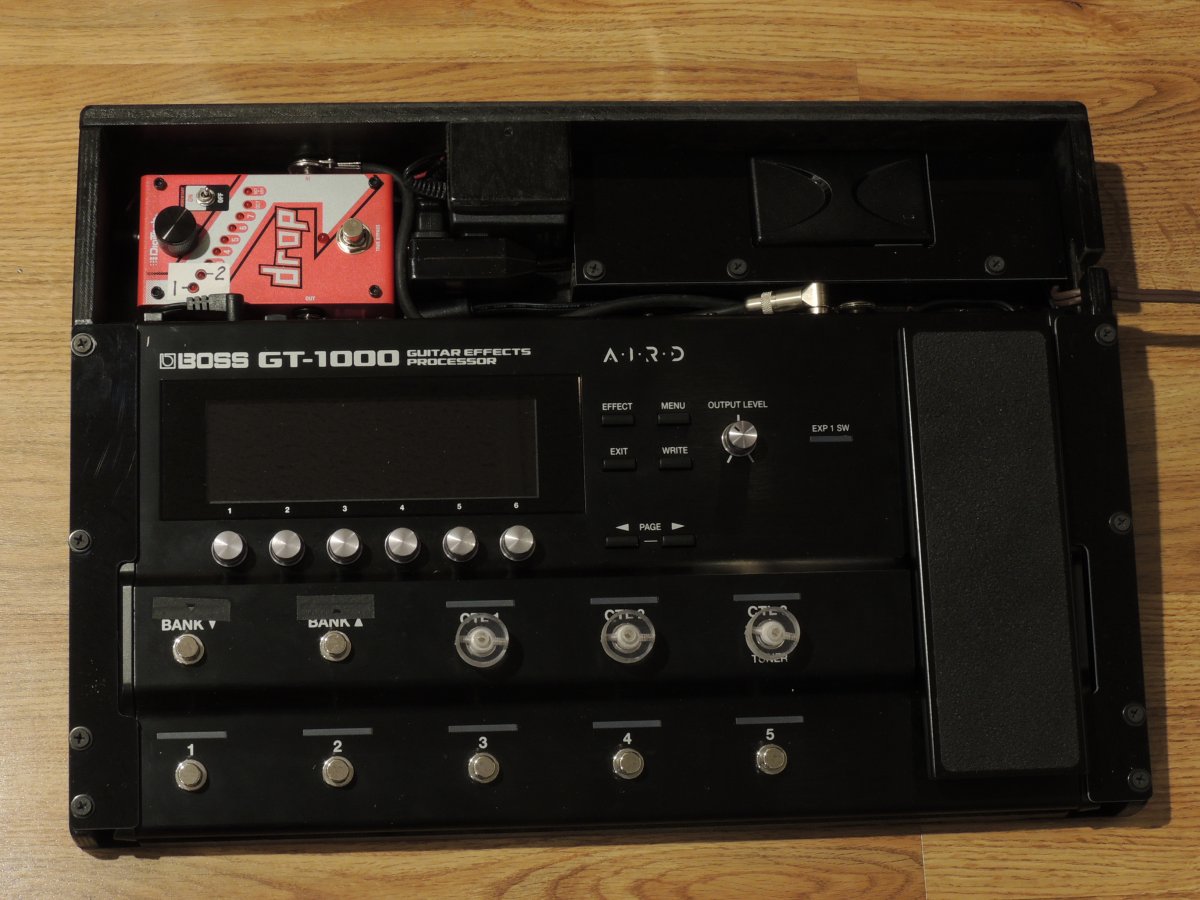 My pedal board is actually an old coffee table re-purposed... although it really is bulky and awkward and hard to cart around. Lucky for me I'm too old to gig so I don't have to lug it on a regular basis but when I take it to the studio it can be a pain! I plan to replace the coffee table, at this stage probably an Nux Bumblebee large.

I probably don't play as much as a lot of you, but I do get out and about in Tokyo when I can. My board for gigs keeps changing and, like some others on here, I have too many pedals, but a standard setup when playing smaller gigs by myself these days is Micro POG-Dirt (lots of these, but my fave is the White Rabbit Distortion)-Flashbackx4-Boss RC-300 Loop Station-Mixer-PA. Depending on what I'm playing, I may add something exotic like the EHX Mel9 or Ravish Sitar. Both offer some truly weird sounds. I also sometimes run some other things into the looper, including a Beat Buddy and a T.C. Electronic Helicon for the mic. I don't bother with the RC-300 effects, as they sound pretty bad.

For jazz in smaller venues, it's just the guitar straight into a DV Mark amp. For a bigger jazz gig, I simply run it through the guitar input in my Mixer and then into a PA. For acoustic, I use an LR. Baggs Para DI (maybe with a looper in front) into a PA. For blues, rock and other stuff, either I play straight into whatever amp is in the room (usually a Fender, a Marshall or a Roland) or through an AMT Wah-Joyo Ultimate Drive first.

rjwilson37 said:
Simplify with the 4 cable method and I love it!

This even switches channels on my amp with a 5th cable. 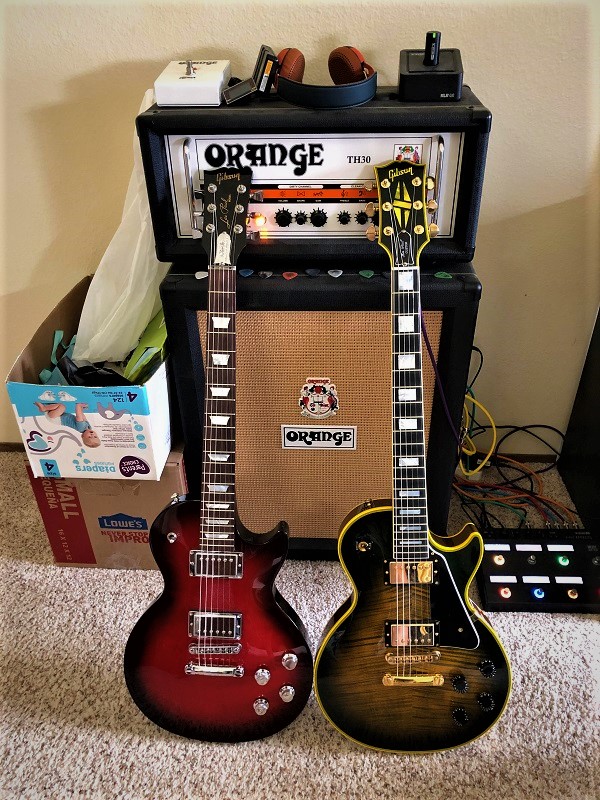 Right to left - CV7005 Sunface > Turbo Tuner > Fulldrive 2 > DLS MkIII > Dunlop Echoplex. Occasionally I put a Crybaby Classic out front of the board too.

The clean boost could bump up any of the ODs or channels in the amp, giving me a ton of flexibility in tones. AC Booster was set to alter to essentially change the clean tone of the amp and could be boosted into grittier tones. The real secret was the EQ in the loop. The four settings on the EQ 200 allowed me to radically alter the tones with relatively minor tweaks. A small mid boost for certain parts I wanted to pop out, a bass cut for thinner tones, an output cut to sit back in the mix more. Incredibly versatile setup.
You must log in or register to reply here.
Share:
Facebook Twitter Reddit Pinterest Tumblr WhatsApp Email Link