Yep you got it....Thanks for sorting that out
H

Thank you for this thread.....it's my first post and I can't think of anywhere better to start!
His legacy lives on and his playing touches me deeply.

BrianGT said:
Thank you for this thread.....it's my first post and I can't think of anywhere better to start!
His legacy lives on and his playing touches me deeply.
Click to expand...

Welcome! I think Koss' playing has had a big influence on a lot of people, he played with so much emotion and raw power...

Hope you enjoy your stay!

I am overwhelmed by all the great information on here! Lot's to read on the dark winter nights ahead.........

Sorry its a bit big:

May have been posted before: 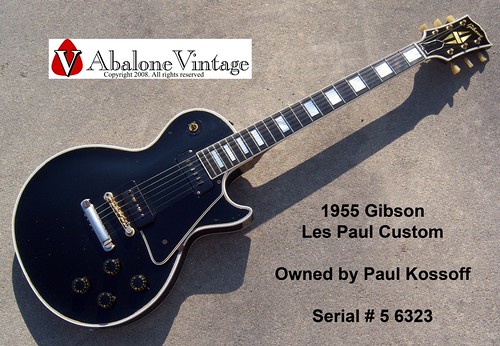 "1955 Gibson Les Paul Custom guitar owned by Paul Kossoff of the band Free. It is thought that Eric Clapton had this guitar for a bit as it came from his former manager."

Paul Kossoff....what can I say that hasn't already been said!
This is just the most soulful playing, truly one of the Greats...He definitely touched some of us very deeply...

Ride on a Pony said:
I love the part when she asks Paul Rodgers about the stage act.

Poor Andy is trying to keep it going as best he can but Paul's making it really awkward.
Click to expand...

I gather the band were really shattered at this point, and Rodgers was basically leaving because of it, and because his concerns wer'nt being listened to. Kossoff actually seems to have the most energy and looks in good shape, sadly a situation that was soon to change.

One day this thread will catch the Jimmy Page one... It will... Believe me...

One day this thread will catch the Jimmy Page one... It will... Believe me...
Click to expand...

Well Paul definitely deserves some space on here.....he ranks amongst the greats as far as I am concerned.

Hi gents, Just thought I'd chime in with my bit, I'm a massive Koss fan, got the tee shirts, got 43 Free and BSC bootlegs, got just about every picture ever took of Koss on my pc, been to his kip in London, got a pic took in the same spot he stood for the BSC album cover, Oh yeah and played his guitar last month.

I never saw Free live but heard 'Free Live' the album (recorded in my local nightclub) Blew me away, after that I was hooked, bought every album, Then in 75 I saw him in the same venue as above with BSC, died and went to heaven, best gig of my life, Koss was on fire, played The Hunter note for note from the Free Live album, magic. Shame there's no bootleg of this one, I remember in between songs Koss walked along the front of the stage and played (just him) about 20 seconds of what I can only describe as the most beautiful music I'd ever heard.
I'll never forget the day he died, me and my brother were gutted.

He's the reason I play guitar today, not very well I might add, I thought some of the Koss spirit might have gone through my fingers up my arms and into my soul when I played his guitar,maybe it takes a while to get going ha ha !! anyway I've included a pic, not many people have seen this one I'll bet. I got this, and more, from someone who took them in 72 at a debatable venue. Frank

Awesome! I bet you've got alot to contribute to the thread.

You're a mackem I see... From what I understand Sunderland was a hotbed for Free-mania in the 70's.

EDIT: I see, so you're the guy in one of the pictures above holding Koss' LP... If I remember rightly, didn't you say on the LesPaulForum that the guy that owns it also owns his stripped burst? Or did I imagine that?

Is that you holding Pauls guitar in the pics above?????

I have always loved seeing Paul playing that guitar out of any others he played.....they just seemed to be a part of one another.

It's funny......when I saw those fabulous pics I thought " wouldn't it be awesome to just hold that guitar" let alone play it!
I am so pleased for you!

If it is you.......would you mind emailing those pics? I have never seen a better close up pic than those. It would make my year!!

Hi Brian, I've sent you an email. Yeah thats me !! Koss swapped the stripped burst with Aurthur Ramm for one year then swapped back.

Free played loads of gigs in Sunderland in the 70's. Koss lived in Sunderland for a while with Geoff Docherty who wrote all about in his book ' A promoters tale ' a cracking read. Koss would frequent a nighclub on his doorstep in Sunderland often with Rodgers 2 or 3 times a week, I was speaking to a mate of mine who remembers one night when Koss asked him for change of 2 50p's for the fag machine.
Another mate saw Free in Sunderland, Koss was out of it, collecting rings thrown on the stage by girls instead of playing, the last number Rodgers threw the mikestand in the air and it tangled around the chanderlier and never came back down, he then walked over to Koss and whacked him straight in the guts !! Not the first time apparently, my other mate who's in a Free tribute band with Simon Kirke drumming on a regular basis with them ( Freeway ) told him after the Albert Hall gig Rodgers went back stage and kicked the shit out of Koss. Frank

I have emailed you my private addy....can't wait!

I know what's going to be my screensaver from now on!

Ride on a Pony said:
Sorry its a bit big:

Got any more Koss' ones?

I've always wanted to find the article (in Guitar player or something like that, can't remember exactly) that had an article on Koss' stripped burst. I think it was from 1994, but I can't remember what issue.

Ride on a pony, I liked your Kos photo so much I touched it up in Photoshop....little better detail!