Not in love with my Standard Faded

Sell it to me if you don’t like it.
For real

smk506 said:
If you don’t like it, move it in for something you do. Doesn’t even have to be another RI necessarily, just maybe not that particular guitar, and maybe not another faded if you’re just not feeling the whole vibe.

I personally love the faded stuff, but it’s not for everyone.
Click to expand...

I like the feel of it, on the neck especially.

I love the way they look when polished up, as mentioned upthread.

I always wanted one of Larry's conversions...

jstarr823 said:
Some guitars have that magic, some don't. Doesn't make it a bad guitar. Just not the guitar for you.
Click to expand...

Tone, feel....all subjective to a point. Someone else might love it.

Just move it along.

I sold this '07 Faded because I couldn't get on with the neck profile. Was a beauty, but I never regretted it. 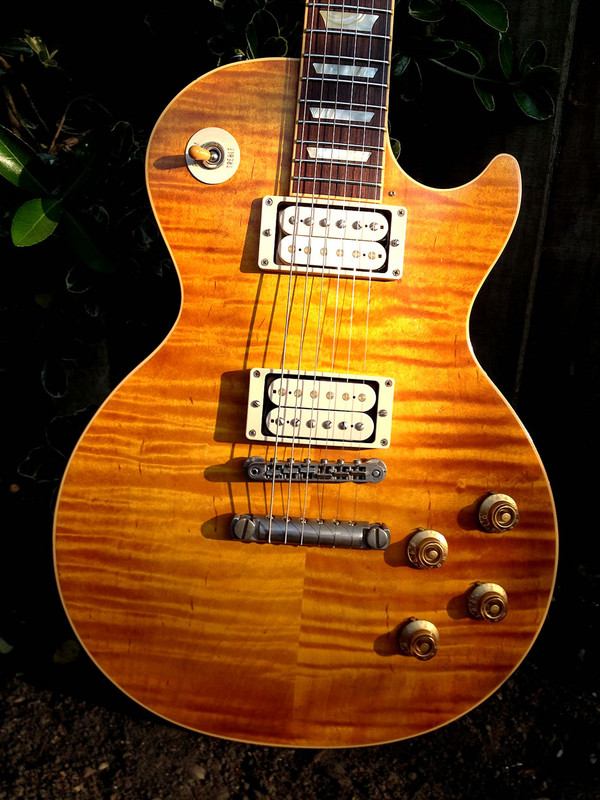 joedonner2001 said:
Just move it along.

I sold this '07 Faded because I couldn't get on with the neck profile. Was a beauty, but I never regretted it.

But for me, guitars are for playing more than looking at. If it doesn't inspire, it's gone, so I would have sold it, too.

The OP sounds like normal disappointment with the guitar, which may be affecting the assessment of tone, too. These situations are pretty sad, but you can sell it and move on. I don't like the appearance of it very much myself. With so many choices for LPs, it's easy to get picky, but why not? May as well get something that thrills you.
A

Thanks for the advice everyone. I ordered this 60th anniversary R0 V1 to see how it compares, as it was priced better than most used R9s. Should still have the 59 neck profile if I understand the versions correctly. If I like the R0 better I'll offer up the standard faded to those who were interested. what do think of this unburst please

AaronE said:
Thanks for the advice everyone. I ordered this 60th anniversary R0 V1 to see how it compares, as it was priced better than most used R9s. Should still have the 59 neck profile if I understand the versions correctly. If I like the R0 better I'll offer up the standard faded to those who were interested.

That's a beauty! I hope you love it

The 1960 V1 has arrived! I have to say, I am absolutely blown away by the Antiquity Burst finish and the top on this one. It makes me so happy just looking at it! Only played it for about an hour, but the neck is a perfect '59-style and the pickups are both rich and clear, so first impressions are all good!

Now I just have to decide which of these to keep... AaronE said:
I bought my first Les Paul a couple months ago (a weird R8 with P90s) and instantly fell in love with it, and I immediately started seeking out another one. I decided to pick up a 2005 Standard Faded that had the full Larry Corsa conversion done to it (it was this one at Guitar Chimp: 2005 Gibson Les Paul Standard Faded ~Peter Green Mods by Larry Corsa~ | Guitar Chimp).

However, after playing it for a couple weeks, I'm just not digging it as much as I expected. It plays and sounds great, there's nothing wrong with it for sure, but the neck just doesn't feel quite a special as the one on the R8 and the overall look and feel is just a little underwhelming. I'm thinking a lot of it may be the aesthetics, because when I listen back to recordings I've done with the guitar, I think it sounds fantastic. It's just that when I'm actually playing it, I don't get the magical vibes was hoping for, and I'm not sure if it's a psychological thing because I don't love the way the satin finish looks, or it's just genuinely not as good as an R8/R9 would be.

Were my expectations too high here? From everything I've read online, people seem to talk about the first-year Standard Faded guitars like they're the best thing out there next to a '59 burst, but this one feels more like my 2019 SG standard than my 2010 LPR8. If I was wrong to expect it to be in the same league as a custom shop guitar, I will probably just sell it and get an R9 or something.

Send her to me! I'll give her a loving home! LOL

truckermde said:
That stuff's hilarious. Seriously, wood doesn't "breathe". There is no exchange of air in and out of wood.

The thinness of your finish can't facilitate "breathing". Have you ever tried to breath through a plastic bag? Pop one over your head, and try it. It's pretty thin...

This is pure gold. Best comment I've read on this forum in a long time - and 100 percent true.

OP, that new one is beyond gorgeous! Congrats!

I owned three of the original run, both chambered and regular weight relived and none of them was anything special beyond he uniquely cool satin finish. In fact, I very much disliked the tone of the chambered one as it was thin and weak sounding.

On the other hand I've also owned a couple of the more recent L&M special run fadeds and they were both a couple of my best Les Pauls.