Amazingly good one. I’m lucky. I’ve had numerous of Custom Shop and USA Standards but this one blows all the other away. Im not saying that because its a Slash Model, but they certainly managed to find wood parts that is in harmony with each other on this one.

It vibrates through out the whole guitar and the notes transforms into feedback within the wood, it’s simply one of the most lively guitar I’ve ever played. Deep creamy wooden tone, sustain that keeps singing and amazingly good string separation. And it roars, a freaking chainsaw. I’m blown away!

Posting some pictures. In ordinary day light where it gets a more matt red colour.
In a darker day light to catch all the nice flames and also pictures from the store where it was in direct lighting.

I just have to say, it feels like one of a kind with this one. I’ve had the Anaconda burst, the Appetite burst and the November burst. They were good but, nothing out of the ordinary. Same goes for the new Standards which I also had and tried.

This one breaths in a whole different league so I guess I’m just lucky to get an example from Gibson that turned out so well. 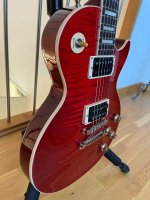 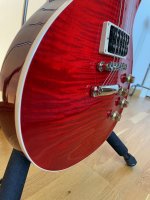 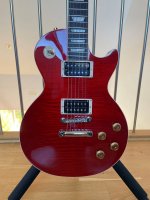 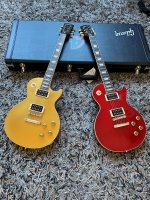 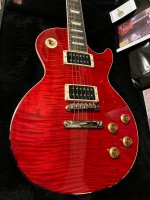 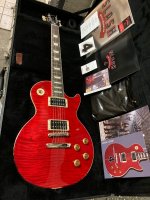 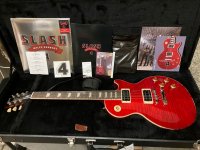 Awesome and congratulations. It’s an awesome color. Curious- will you be using this as a regular player or a collection piece?

Congrats to your new guitar, what a beauty, and I agree these are very lively guitars.
M

JMP said:
Awesome and congratulations. It’s an awesome color. Curious- will you be using this as a regular player or a collection piece?
Click to expand...

Well I’m a home player due to my neurological disease MS so first, I don’t have much to do except play guitar and admire Gibson guitars hehe.

But it will be played as much as my other. But!!! It will be carefully played and I will treasure it so I won’t make any dents or do anything with the guitar. The original strings will be packed and stored and some day I might sell it. So it will be a collectible item and a player guitar so to speak. It will be so carefully taken care of so it will be as new the whole time. That is the plan.

If it wouldn’t have been such a good guitar it self I would have had it as a collector item for a while I think.

NGD is always an inspiration to make music.

Always great when a certain guitar "clicks" for you and you know it's just "it".
Great score, happy ngd!

That would pair up nicely with a flamey 335

Nice catch, she is a beauty, and I am very happy she is a great playing and sounding guitar for you. We all love a guitar that screams and plays well, I am glad you finally got the one from Gibson that hit the Mark.

In this Video above, it looks like #4 has zebra pickups.

Edit: Never mind, it is probably his Vermillion Les Paul or something else in the video above. But... on this other video, you would think he would be using his #4.
The River Is Rising

Sorry, just trying to find a video with him playing this new #4 guitar, it is definitely a thing of beauty and comes with a lot of cool goodies, but I am trying to find out more about him playing it. I thought it would be the guitar he was touring with for the #4 Album and such.
Last edited: Feb 28, 2022

Congrats again on getting this guitar, it looks like they are sold out everywhere since only 250 were made.
You must log in or register to reply here.