NGD: Dammit it's a CHIbson 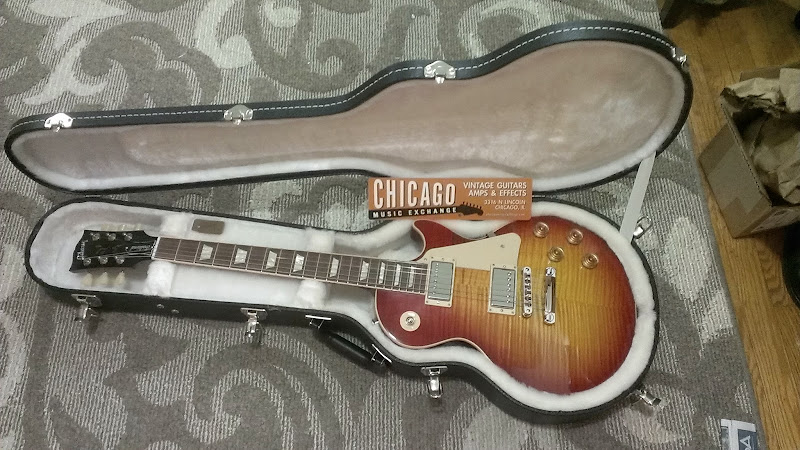 So a few weeks back I was in Chicago for a wedding and as soon as my girl and I got off the plane we headed to CME which is flat out heaven. 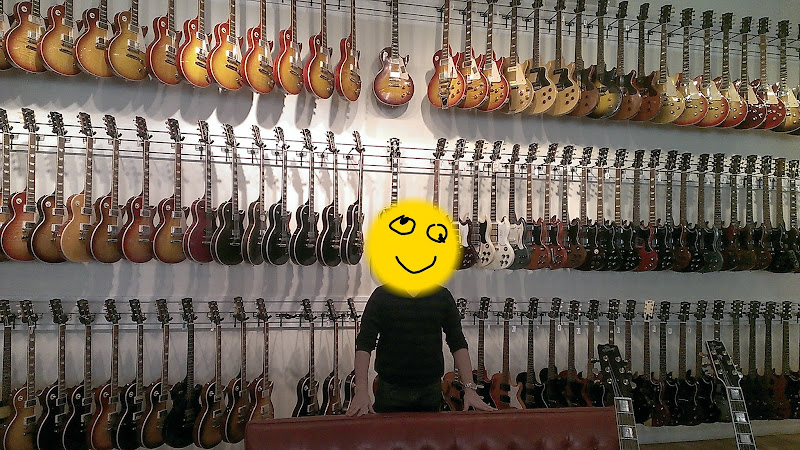 I walked through the door an was overwhelmed by the beauty and size of the place. As I walked in Alex from the 100 riffs video came over and said hi, asked if I needed any help. I told him we were just in town for the weekend and I had to make a stop and see the place though there was one guitar I saw on their site that I wanted to see. We walked around, talked guitars and pickups (Gibson and authentic thinline and repros), and then he handed me a cable and told me to go have fun with whatever I wanted. I played the Tea Burst but the asymmetrical neck wasn't for me as my Elitist with a 59ish was thicker throughout.

I played a 14 Traditional which Alex said was an anomaly in that it weigh a metric ****-ton (my words, not his), a 339 for fun, a standard, a R8, a vintage Thinline because I'm a big Tab Benoit fan, all in a room with lots of amp options 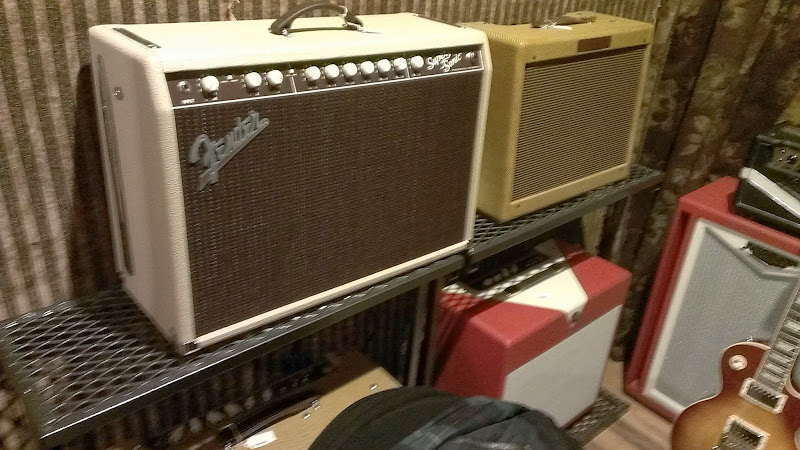 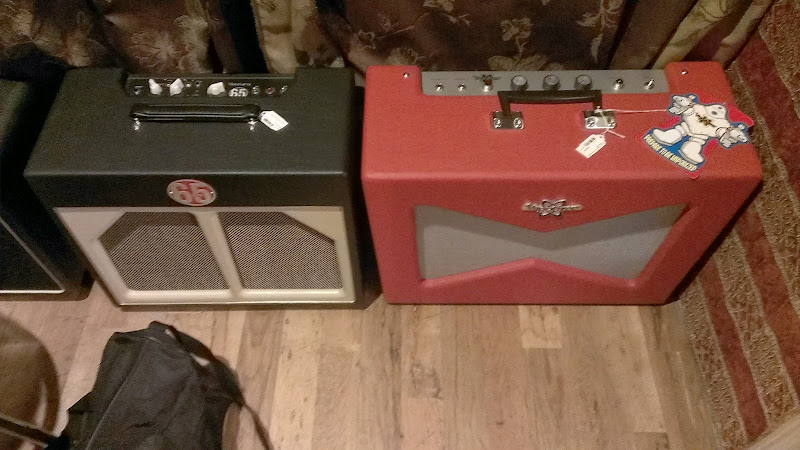 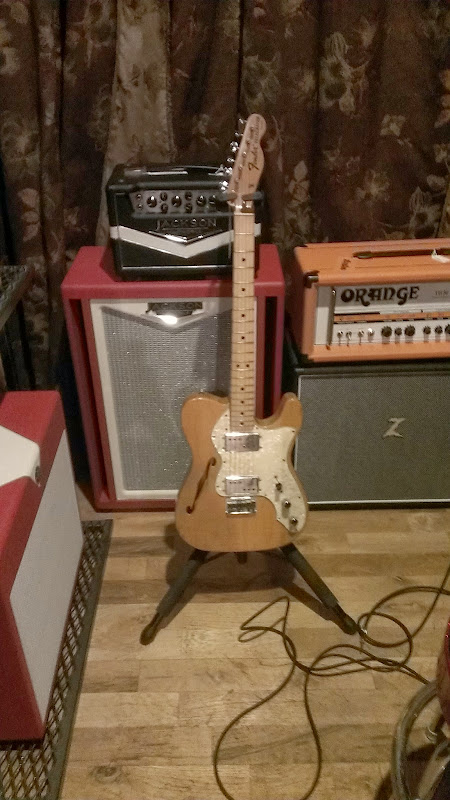 and then it happened... 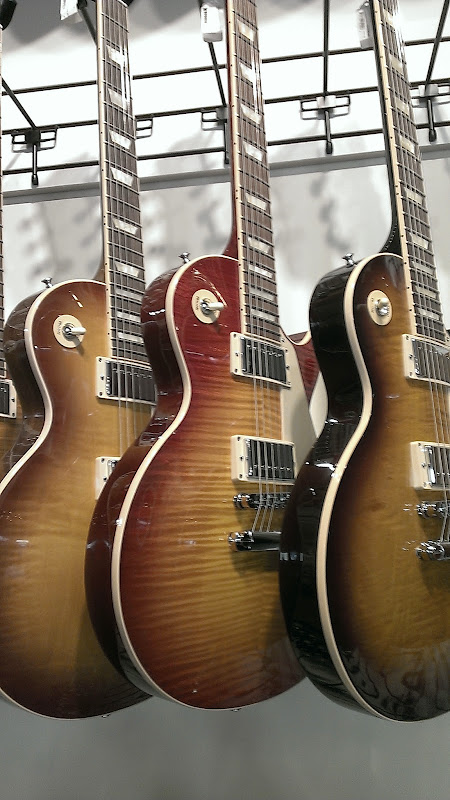 I was looking at the Gibson wall when I pointed out what I thought was an R9 due to the flame which turned out to be a 2013 Traditional. It just so happened that this was the exact model I had been looking for since it is non chambered/weight relieved and doesn't had the 2014 fret inlay (which isnt that bad in person). As soon as we touched I knew I was in trouble. 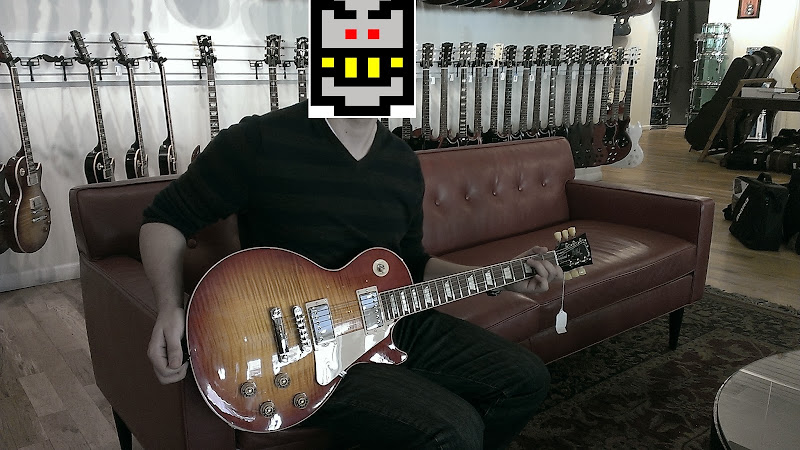 She felt and played great though she was not step up to my preferences. The board was a little dusty and light looking but the grain looked nice and I had a feeling with some Fret Dr she would darken nicely. As the time to go neared I struggled with the thought of buying it right then and there. I have an amazing hot-rodded Elitist and I decided I needed to go home and confirm that I "needed" this guitar. Alex was great the whole time and probably checked in 2 times over 2 1/2 hours and showed no disappointment when I told him my plan and left with only purchasing one tee shirt probably never to be seen again. Me: Blah blah blah, vintage this, blah blah Pearly Gates VOS, blah blah, ummm do you have this brown CME shirt in a size smmedium?

That guitar haunted me the whole weekend and I made my girlfriend agree to go back one last time before the flight back. We arrived and sure enough someone else had already put the guitar on hold with a purchase scheduled for Wednesday. I was crushed but maybe it was meant to be. I emailed Alex and told him to reach out if the other guy flakes and sure enough I had a second shot at "my guitar." Alex made me an offer that was too good to even try countering when you take into account shipping, taxes(?), and a setup and I accepted.....later that night...2am-ish...in several emails rambling emails (alcohol may have been involved) and finally call when they opened the first thing the next morning.

I skipped work to sign for the package which didnt end up arriving till 630pm and let the box and then the case warm up before opening (probably not needed but whats a few more hours). 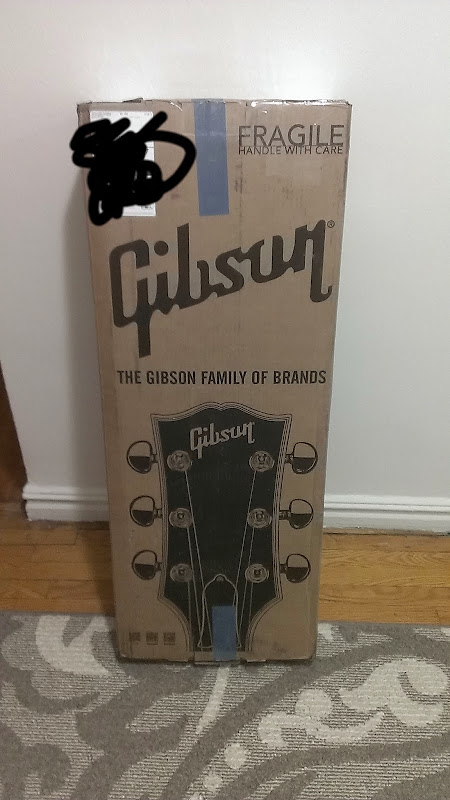 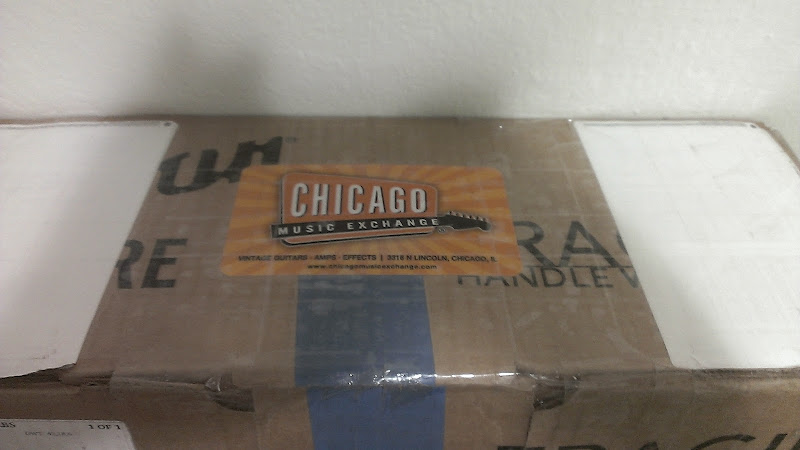 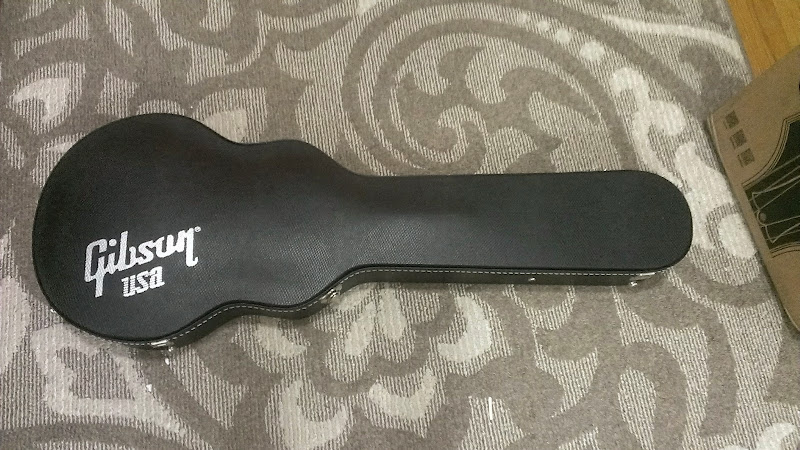 As I mentioned the fretboard was kinda light for my taste but even rubbing a finger on the board darked it somewhat so went to work with some Fret Dr.

Board was lighter in person 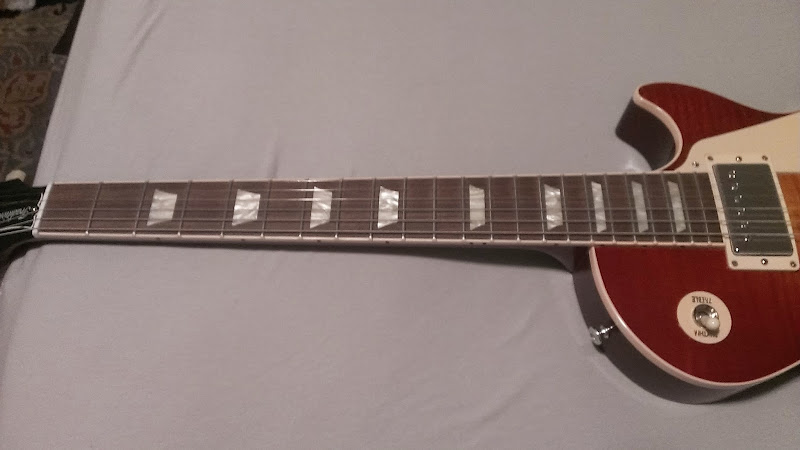 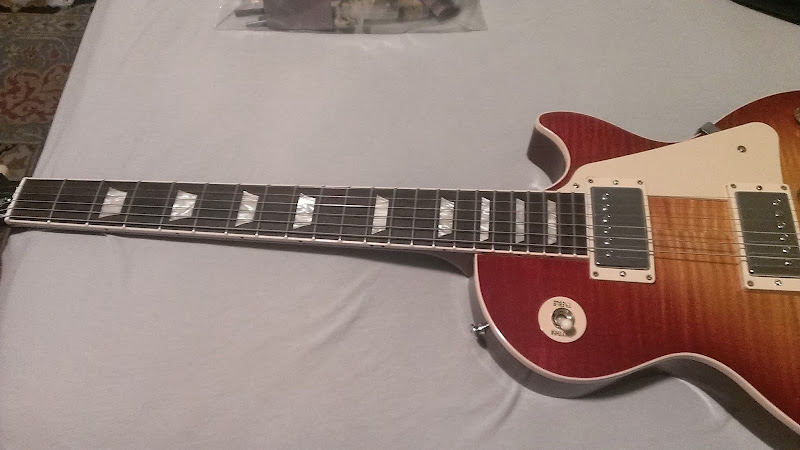 Next to my Elitist 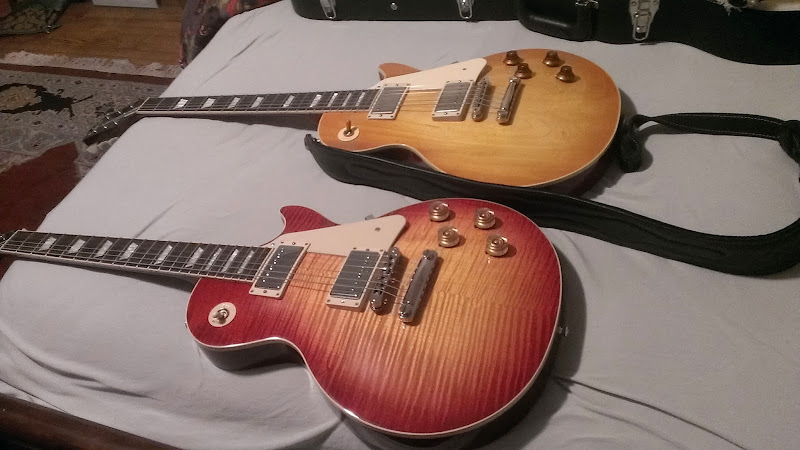 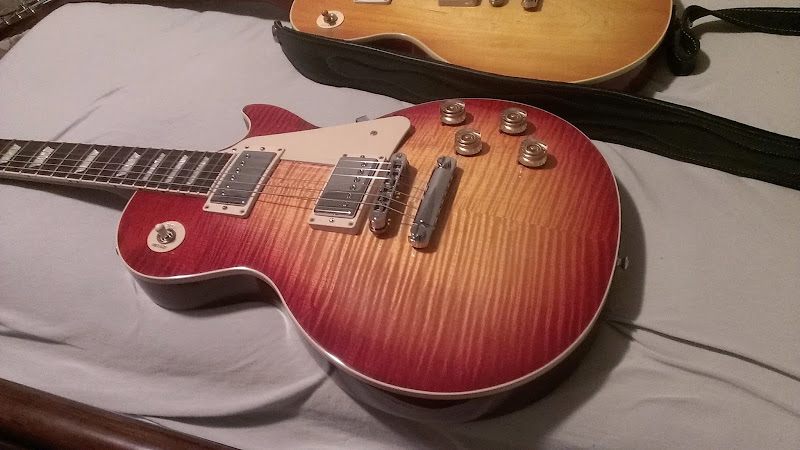 The setup was great and came with the requested DR Pure Blues 10s. I love the neck and the frets are skinnier and taller that the Epiphones I have owned which makes fretting easier though does allow for notes to be pulled out of tune if you grip like crazy. The guitar has insane sustain and resonance and the fit and finish in near perfection. The scale says she weighs in at 8.5lbs even with a beefy neck.

The electronics were all done very nicely and the 57s dont sound bad at all even with fresh string which tends to be a little bright the first day. I wish I could tell you that Andy (my guitar) fought the good fight, and the Sisters (me and modding) let him be. I wish I could tell you that - but prison is no fairy-tale world. After about 2 hours I couldnt stand it anymore. I had to know what my RD59 neck and JPPost72 sounded like in my new guitar. I had already rigged a new 50's CTS split coil harness with PIOs so the operation began and a while later the transplant was complete along with a new aluminum nickel plated TP, locking Tone Pros Studs, some fresh Thomastik Blues Sliders which are expensive but I am 70+ days into a different set on my Elitist and they show no sign of needing replacing whereas I go through some Pure Blues (or any non coated) in 20days even with cleaning them after each use.

I still need to work on the PU heights and by the time I was done soldering it was 3am so I only got a few minutes of amplitube3 but so far I am incredibly happy and grateful for the wonderful experience.

If you are in the market for a new or used or vintage guitar I would seriously give Alex a call or email. They don't list there new and leftover Gibson stock but they even went as far as to bust out the calipers when I emailed them about the Tea Burst.

More pics and probably a demo to come shortly.

I also acknowledge that I have gone from a beautifully grained plaintop to a "lawyer/dentist burst" but I just couldnt say no. When I name this one it needs to be something tied to a famous home wrecker/seductress as I had a happy home till this one came along with her amazing looks and her thickness is all the right places and broke up the family.

Google says Eve from Adam and Eve and Angelina Jolie. What do you think?

I too just purchased a Gibson from CME. Mine arrived yesterday about 4:45 EST. I didn't have the pleasure of going to the store, but one of my company spokesman lives in Chicago....so I am hoping I need to go out there and film this summer....

But I must say they were great to deal with. I spoke to Chase and George. They were great. answered all my questions and didn't seem upset when I almost didn't buy the guitar. They did a killer job at packaging the guitar up too. I was very happy with that. I will definitely do business with CME again in the future.

Your find is a beaut. Enjoy her.

Finally, a great CHIbson story. HNGD! Hope ya enjoyed some real pizza while you were here too!

I think I've been overthrown as Verbosity King. Congrats! -Rod-

Nice write up and even nicer guitar. Congrats. I'm having a hard time telling if it's HCSB or light burst... Beautiful either way.

I already ditched the speed knobs for bell hats

stleon2 said:
Nice write up and even nicer guitar. Congrats. I'm having a hard time telling if it's HCSB or light burst... Beautiful either way.
Click to expand...

I believe its Cherry or thats what Alex said. Maybe Ill look at the case candy.

Wondered how long this was gonna take.

Hope you decided to keep your elitist around also. Everybody needs a good plain top.

Guess it was meant to be afterall.

twilliams said:
Wondered how long this was gonna take.

Hope you decided to keep your elitist around also. Everybody needs a good plain top.
Click to expand...

I got PM'd some great offers even without pickups installed for Plain Jane but for the money I would get I would hate to never see her again. If anything I set her up differently down the road with different PUs and maybe a Bigsby. 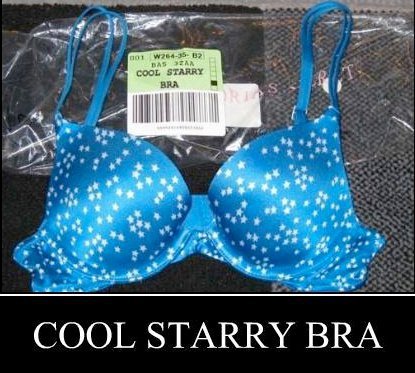 Congrats! Did you go with gold or amber bell knobs?

Very nice. I've been to heaven and it's spelled C.M.E.
S

I skipped the story and went straight for the pics...then I got to the chick at the end and was like "**** now I gotta read the whole thing" 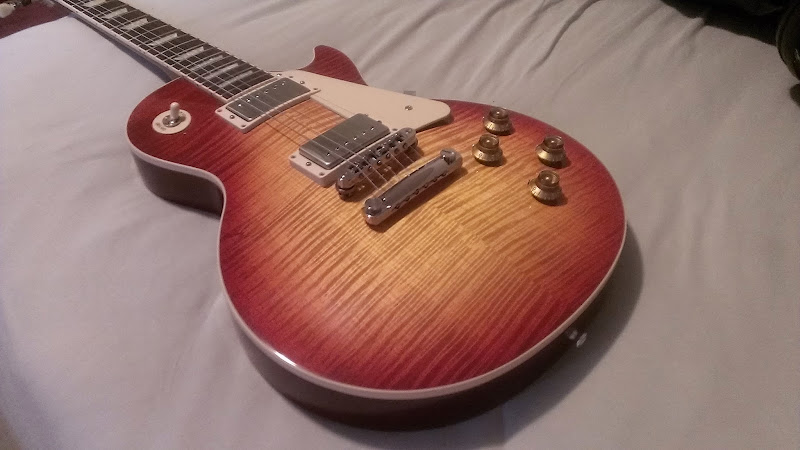 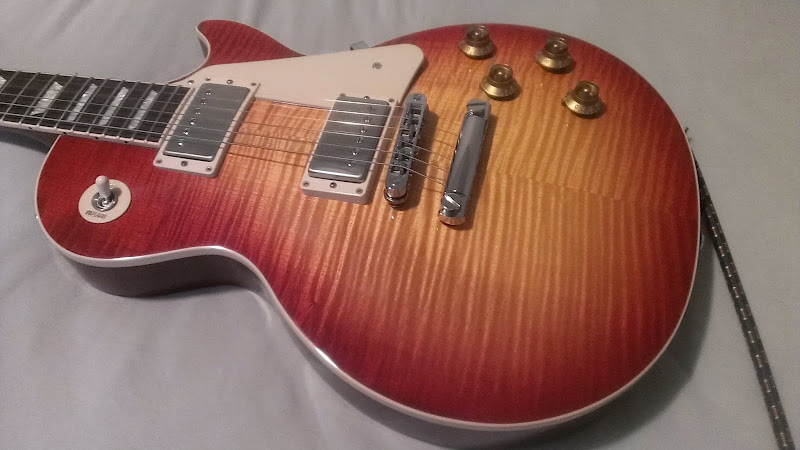 I totally fell for your subject line. I was reading your story, and kept saying to myself CME wouldnt ever mistake a chibson for a gibson. Then after finishing, I figured it out. Doh! Beautiful LP. Congrats!!!

Gorgeous guitar, HNGD! Stellar top on that one for sure. If you ever decide it's over with Jane, you know where to find me