I'd posted this at the end of the Unofficial Burny Official Anything thread, but I'm not sure if anyone actually reads that anymore so trying a new thread and deleting that post - apologies if this isn't kosher.

So after decades of wanting a Les Paul, I finally got one - arrived yesterday. And thanks in large part to you folks, I ended up going with a Burny after looking at some other options: 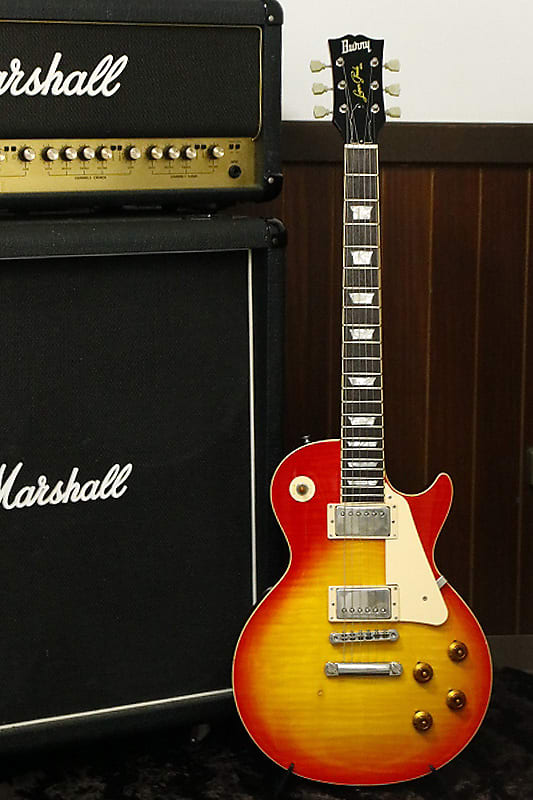 This thing feels alive in my hands, and now that I've finally gotten the "Les Paul through a Marshall" experience first hand... I get it. I'm in love.
Looking at probably rewiring '50s style when I swap in some PIO caps (am I correct in that the original pots in these tend to be fine?), possibly switching the magnets as it sounds as though folks have found that improves those later VH-1s. Going to give it a full setup and adjust the truss and probably lower the bridge a little. Thinking about cutting a bone nut for it. May also see if I can steam out that ding in the top, though honestly I'll probably not worry about that one. As it is, the thing feels great and sounds great and already breathes rock and roll. I swear I could feel it vibrating as I was unpacking it. Happy NGD to me!

Anyway - I'm trying to nail down a year/manufacturer - the seller thinks it's Fujigen, which seems possible based on what I've been reading on here, but from what I can tell, that means either limited run in '92 or possibly ~'98 as Orville was on the way out (which is the seller's belief, and he's been through a lot of these from the look of things).

It has a long tenon, 2 hole truss cover, VH-1s (presumably from the last run), small yellow ceramic capacitors, no serial on the headstock or anything marked in either pickup cavity (which would indicate '92, right?), veneered top.
No pictures of the control cavity in the reverb gallery, but I snapped one yesterday - don't know if there's enough identifying info with these pots or not: 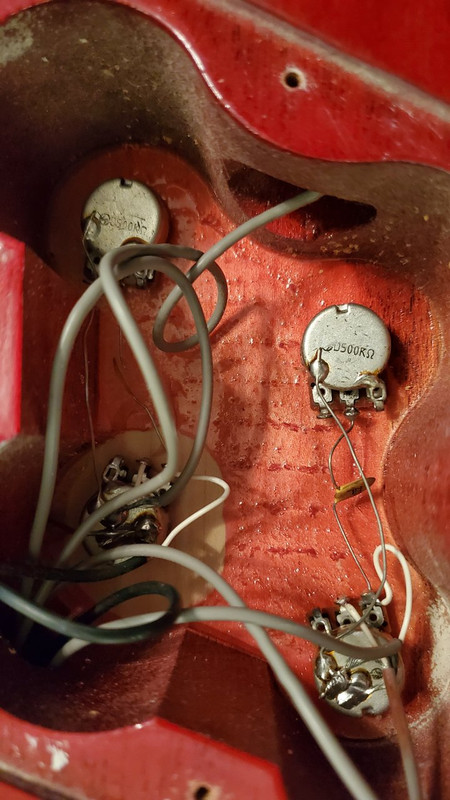 Any thoughts or help you all have would be greatly appreciated! Thanks!

Those look like mini pots? When you replace the harness I'd remove them as well and use some full size 500k pots.

I'm uncertain on the year as I haven't seen one with those pots. @o0mobius0o has had a lot of Burnys; a lot more than I have.

Haven't seen those pots either, though they might be okay. Size doesn't really matter. Nothing to nail down a year, but it's Fujigen made so late 90s, early 2000s.

Thanks y'all. Yeah they're really small, wasn't planning on replacing them if they're not garbage, just wasn't sure. On the one hand it's not tonally deficient so I'm not looking to rip everything out and get new knobs and all that if I don't have to, but on the other hand, I can't just... not tinker with it, sooooooo I've got to mess with it some.

Went ahead and pulled the old caps, put an old Gudeman PIO measuring at .015uf in the neck and a pair of old bakelite-encased General Instruments (PIO?) wired in parallel at .016uf on the bridge, and went and moved things over for 50s wiring. Not sure I love that value on the bridge, but the neck sounds mighty good to me. First time with 50s wiring and man it's nice having usable tone and volume knobs.

Also upon closer inspection, that nut might be bone already. Still probably going to have a "fun with magnets" day, at least on the bridge.

The nut is probably bone.

There are pots that wouldn't require you to change the knobs. CTS makes a metric pot and Philadelphia Luthier carries those. Alpha pots would also be a direct fit. Bourns use a course shaft knob so you wouldn't have to change those, but you would still have to enlarge the holes in the body to use them. They have a stiffer friction point that I like though as they don't move easily if you brush them. Some don't like that though and others like it better.

There are pots that wouldn't require you to change the knobs. CTS makes a metric pot and Philadelphia Luthier carries those. Alpha pots would also be a direct fit. Bourns use a course shaft knob so you wouldn't have to change those, but you would still have to enlarge the holes in the body to use them. They have a stiffer friction point that I like though as they don't move easily if you brush them. Some don't like that though and others like it better.
Click to expand...

Amazing - thank you so much.

o0mobius0o said:
Haven't seen those pots either, though they might be okay. Size doesn't really matter. Nothing to nail down a year, but it's Fujigen made so late 90s, early 2000s.
Click to expand...

And actually I've been poking around more, and apparently the black neck lead/grey bridge lead wire on the newer VH-1s would be post 1996, so yeah... late 90's Fujigen definitely checks out. Sweet.

And interestingly enough (to me, anyway), I popped the magnet out of the bridge pickup today - was expecting ceramic based on what I'd read about the later-run VH-1s, but it's definitely a short alnico - no idea what number though. Popped in a longer alnico 5 I had laying around and it sounds good, though I do think that 0.015 is maybe brighter than I want on the bridge cap, so I'll bump that up to 0.022 when I inevitably get some of those bigger metric pots (because again, I can't just not tinker with it).
Still thinking I'll try some other magnets in there, but both pickups come in at ~8.0-8.1k, so I might just have to go way down the rabbit hole and start winding again if I want something more vintage spec.

Replaced pots, pickups and caps on mine.

pot change made a huge difference.

Pots definitely helped. Russian caps are on the slow boat from Russia, apparently. I did end up putting an A2 in the bridge and an A4 in the neck and it's sounding pretty good, but I'm still going to wind some. I know they get squeal-y but I want something unpotted in there.

My unpotted hand wound ox4s don’t squeal but I tend to use software amps.

I had Russian pios and found then a little dark , replaced them with fairly run of the mill orange drops and they were right for the Burny.

The tone pots I got are vintage cts and the roll off is amazing.

I have Russians in some of my guitars. I've used Orange Drops as well and Mallorys. All kinds of PIO besides Russian like Vitamin Q, Westcap, Gudeman, the black ones Philly Luthier sells.

I haven't tried the Russian PIO before but I grabbed a few different ones and I figure I'll try some out and see what I like. It's a pretty bright guitar already and will likely be more so once I have the new pickups wound. Still have the old Gudeman PIO on the neck and an old poly film 0.022 I had lying around on the bridge. I've used orange drops before (have one in my strat IIRC), and they're fine - I just figure some extra mojo - real or simply perceived via placebo - is pretty much always worth it

And mine will probably squeal a bit - I'm not as good as OX4, and I'm playing through a modded Marshall 1959s - which is an unforgiving amp and has taught me just how good some of those guys were in the old days.

If it’s kinda bright already the Russian caps I think would mellow that top end out slightly.

just from my experience...

R1sky said:
If it’s kinda bright already the Russian caps I think would mellow that top end out slightly.

Allegedly they're out for delivery, so we might find out today

They're in, and they sound effing good man. All they had in stock for 0.022 were the huge 1000v and I swear they were buzzing more for some reason, I did get a 0.015 and a 0.033 in more normal sizes so trying those out tomorrow when the kids aren't asleep.
S

Update: probably reverting back to the bigass 1000v ones, neck sounded just a little better (though I can't explain why - the neck values were within 0.001 of each other when I measured) and the 0.033 took too much bite out of the bridge. Buzzing looking like it might actually be a distinct case of "these pickups are potted but holy hell they're super microphonic because some bozo keeps taking the covers off to mess with the magnets", though I'm wondering if it isn't worth throwing some electrical tape on the underside of the caps just to make sure they're not contacting the backs of the pots or anything.
Probably going to get some tinkering time in today and will report back, I know y'all are dying to know the thrilling conclusion

So stuck the covers down with some beeswax and... they're still possibly the most microphonic pickups I've ever played through, though they are admittedly sounding pretty good now. This guitar is turning me into more of a purist, I've even pulled my beloved EP Booster out of the chain, it's just Burny > little bit of reverb > Marshall. Loving it. I mean, "ow my ears" obviously, but loving it.
You must log in or register to reply here.
Share:
Facebook Twitter Reddit Pinterest Tumblr WhatsApp Email Link