That's the one to keep if you are only left with one pointy guitar. Is it a US model? Pretty rare with that finish and maple fretboard. It's a beauty.

heartburn said:
That's the one to keep if you are only left with one pointy guitar. Is it a US model? Pretty rare with that finish and maple fretboard. It's a beauty.
Click to expand...

Thanks! It's a US model from the California shop. By all accounts it's an '87. that's how my purple warlock headstock was, 6 in- line tuners.

The new headstocks with the ball sack look crazy to me

The best one is the Beast headstock. I bought one as soon as they announced the model with the intention of fending off lead singers in a really wild metal band. It has chunks missing from that very purpose, but is still hanging in there. 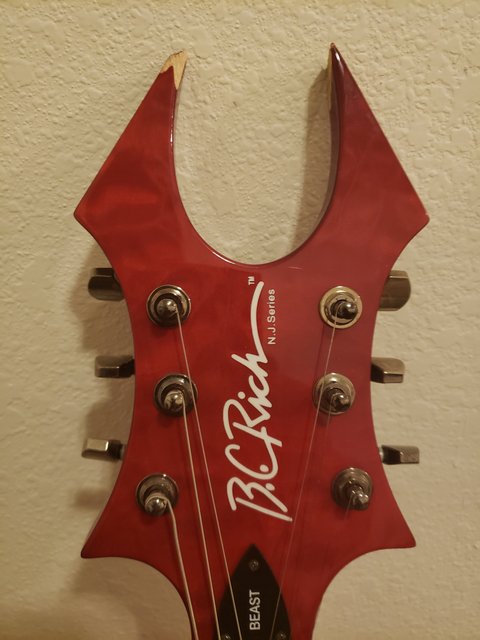 So you guys have seen my group of BC Rich guitars and we have seen Lefty's BC Rich and now Thundermtn's headstock, the rest of you BC Rich owners need to post up some photos of yours. Let's make this an owners picture thread at this point.

My duo, an original Beast and a Beast headed Jr. V DeLuxe 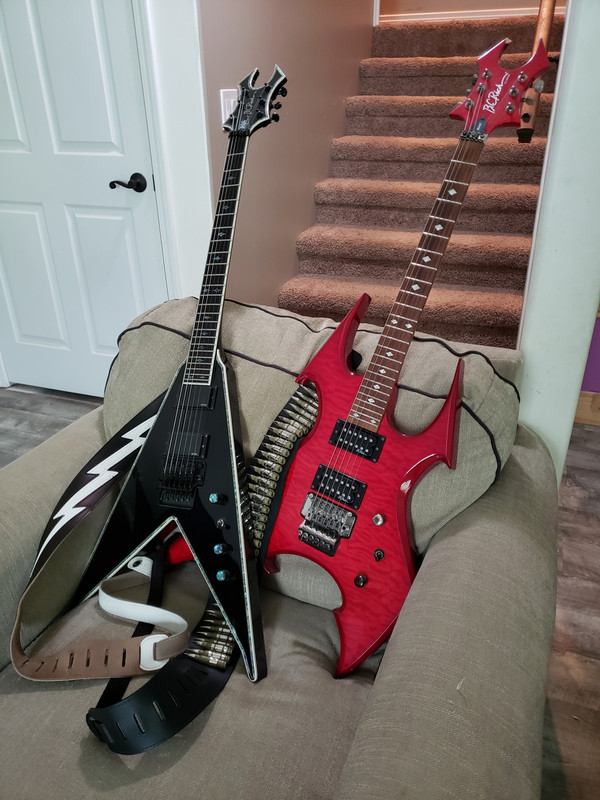 Bandmate decades back had an early Mockingbird.... Incredible sounding guitar.... Played like a dream too.... Thing would scream.....

Living with me in its FOREVER Home. I got an original 1984 NJ Series bolt neck Mockingbird. Very cool! I'd love a neck through version of it but those don't appear often.

WoW! I like everything about that except the purple. Never cared for mockingbirds with the cloud inlays. Those are MUCH nicer.

Anyone got a USA made Bc Rich Exclusive model? Been wondering how the comparison between the necks are on these and the Korean models.

You asked, so, well, no. Except for one or two models from the original series, I think they're kind of silly and in appearance and built to a mediocre standard. They're mostly designed around appearances, it seems.

The originals back in the 80s were very well made... I didn't like that little backcut but love it at the same time. Back then, our singer traded his heavy old Gib Custom in on that lightweight BCR at the musico where I worked day job. I put the BCR in the case and handed it to him, took the Lester/orig case in back and took it home when we closed for the day...

So yeah, loved that backcut BCR. It got me an old Custom...still have it...
H

moreles said:
You asked, so, well, no. Except for one or two models from the original series, I think they're kind of silly and in appearance and built to a mediocre standard. They're mostly designed around appearances, it seems.
Click to expand...

I definitely won't argue that some of the shapes through the years have been gimmicky. Some are downright ridiculous. I haven't owned or played every shape that they have built but I have played on many of the classic shapes. For me the bich and mockingbird are my favorites, both play well and do not have ergonomic issues with playing both standing and sitting. I also consider the warlock a classic shape and while I can play them both sitting and standing, in the sitting position they can get a bit fatiguing at times. I owned a V at one time and it was a great guitar, like most V's took some getting used to but played well and balanced well.

I am a metal guy and always loved the look of the ironbird but could not get along with it while many others love the shape. I have wanted an ignitor which is one of the more modern shapes for years but have never played one. It too could be a shape that I just wouldn't like after playing it.

As for quality, I think that some of the ownership changes through the years and introduction of some terrible product lines have hurt the brand in terms of quality. Some of the entry level lines were absolutely terrible. Some of the branding done didn't define enough to separate the entry level imports from the NJ and US lines either. The "Bronze" series was an early example that tried to distinctly define the difference but it was still not enough to separate. I have owned and played examples from the Japanese NJ line, US line, the calibre series from the Czech republic, Korean (early 2000's and the current ownership line) and most have been great. I have played some of the recent (2013 or so) Chinese mid-level stuff as well as a lot of guitars in the entry level bracket that were terrible and from the minute you pick them up felt cheap. But, this cheap built entry level stuff is not limited to BC Rich, I have had the same experience with some squires, jacksons, epiphones and even that brilliant marketing decision the baldwin by Gibson. While Gibson did a bit more the distance themselves from the baldwin student guitars, I still see that as the selling point on many of those terrible instruments.

Sorry for the long post, but wanted to make sure that I got my thoughts out there.

I love guitars, no single shape and brand, just all of them. I want one of each of everything. vintage, modern, strat or Les Paul. And respect everyone's opinion on such.

heartburn said:
But, this cheap built entry level stuff is not limited to BC Rich, I have had the same experience with some squires, jacksons, epiphones and even that brilliant marketing decision the baldwin by Gibson.
Click to expand...

Bottoms now are just that, bottoms. Floor stand guitars in shops... I have a wide range of instruments but no junk. I like Epi and Sq, and have em, right along with top line Gibs and Fen....

Sq VM and CV are some of the best bang for buck out ther, gtr & especially bass, have multiples of both..along with Fen basses and Stein...

That being said, I don't judge any co. by their bottoms... They are a necessary for entry level and pay bills...for them AND retailers...They'll move several bottoms compared to one big boy... Bottoms are simply money movers... The eternal Epi 'special' LP on sale for $99... Noodle neck POS... Simply a money mover...

Now, law of averages says there will always be flukes with ANY brand any level... i.e. What SHOULD be a dog is killer magic. What SHOULD be killer magic is a dog. Seen a bunch.... Been trying to buy a specific gun metal gray Melody Maker Lester for a year from a bud... Damn thing plays as well as a couple of my big boys.... Fluke build...

As a general rule though, bottoms are bottoms...

moreles said:
You asked, so, well, no. Except for one or two models from the original series, I think they're kind of silly and in appearance and built to a mediocre standard. They're mostly designed around appearances, it seems.
Click to expand...

This is so wrong it's laughable. Yes they are wild in shape, but so is the Flying V and the Explorer. Are those guitars for looks only too?

B.C.R.'s are guitars for playing heavy metal and for that purpose they have a lot of things that are spec'd perfectly for that. I had my Gibson V and LP Classic before I had B.C.R's and through triple rec with some gate and boost the Gibsons slowly got left at home as I gigged both brands over about a decade.

The two I have play great, stay in tune under extreme abuse, and the control layout is nearly perfect for how most people play them, grinding distortion on the bridge pickup.The scale length is great for down tuned guitars and the pickups usually do what users want without a swap. The construction makes them pretty tough for venues and users that have pretty hazardous conditions.

You haven't used them for what they were meant to be used for in a real life situation.

I came close to getting a 'bird though... They had their own tone color and screamed....fat and hot....

I preferred Lesters back then and had three cherry burst Lesters... and took a CS level cherry burst figured Strat home that somebody traded in on one of the Hamer 'flags' we stocked.... Loved the necks on the real Hamers (Joe D. days), even better than Gib necks to me... Mockingbird neck was up there with 'em too.... I was more into conservative body shapes....

The original BCR guitars were very well made and played extremely easy... We sold a bunch and I unpacked all of em, checked action, and played every guitar we had.... BCRs were no slouches by a long shot...

There were some great necks back then... BCR held their own with the best of em...... Grover Jackson blew me away though with the necks on those first high dollar spike ass RR guitars.... Silk... First Hamer Chaparral necks smoked the GJs....and everybody else in my book... 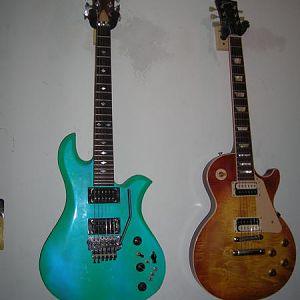 Thundermtn said:
This is so wrong it's laughable. Yes they are wild in shape, but so is the Flying V and the Explorer. Are those guitars for looks only too?
Click to expand...

Well, yes. There's nothi9ng functional about a V or Explorer shape -- quite the reverse, really. That doesn't mean they can't sound becutiful, nor does it mean they aren't beautiful. For BC Rich, I'd simply poiunt out that the publoic has voted on the aesthetics by not buying them. I admired the build on the originals, and while I never bothered to try one out because I don't ask shops to let me fiddle with guitars I have no intention of buying, I expect they played well. A lot has happened with the brand since then, though we could say the same for Gretsch and Guild, which have fallen and risen, been sold, moved, repositioned... I've seen some really cheesy BC Richs over the years.

Jim Klein said:
i started playing b.c.rich guitars in 1980..bought my first one at west l.a. music..seagull supreme [still have it] went thru a custom made eagle[wish i still had that one] and 2 bitches..used to go to the ''factory'' and hang out with neal moser..good guitars .dick wagner turned me on to them. to me the eagle was the best design ..
Click to expand...

Dick Wagner is the one who made me want a Mockingbird, he also played a Seagull that I heard called a toilet seat... it is kind of odd looking and that point in the top looks like it could hurt.
Steve Hunter & Dick Wagner are my favorite guitar duo, didn’t they both play B.C. Rich for a while with Alice?
You must log in or register to reply here.
Share:
Facebook Twitter Reddit Pinterest Tumblr WhatsApp Email Link