I was one of those people who always said that if Epiphone ever got rid of the atrocious (IMO) headstocks on their Les Pauls I would grab one, so I knew as soon as the 2020 lineup was revealed I would have to put my money where my mouth is. The white LP Custom was the one I wanted to try the most, and luckily that seems to be the first model that Zzounds got in stock.

I'm a Gibson guy and have multiple USA Les Paul's and SG's, and my only experience with Epiphone has been one of the Slash Firebird's that they released last year. That was a really well built guitar though, so I had high hopes for the quality of the 2020 guitars when I saw the upgrades they were putting into the line. With that said, this guitar has really shocked me with how good it is. The upgrades in materials are obviously a big step up from last year, with an ebony board, grover tuners, graphtech nut and CTS wiring, but the biggest step up is in build quality. The Slash Firebird was well built, but it still had the normal Chinese guitar things you'd see like some uneven and sharp frets, dry fretboard etc. This guitar is immaculate. The frets are absolutely perfect, and the "rolled fretboard edge" that Epiphone has been touting and I frankly thought was marketing BS actually feels great. I went over this thing with a fine toothed comb and couldn't find anything to complain about aside from some VERY small paint bleed on the binding. Now, is it as immaculate as my USA Gibson's or my PRS employee guitar? No, but it's also a $670 guitar and those are multiple thousands of dollars each.

Playability is great. It came out of the box setup pretty well, I just had to tweak the truss rod and lower the bridge to my personal preference. Like I said, the frets are finished perfectly and the rolled fretboard edges give it a broken in feel that's really cool. The ProBucker pickups are good for what I do (mostly rock and blues, not much metal anymore) and obviously the CTS wiring is top notch. I'm assuming that the fretboard is dyed because it's jet black, but I cleaned it last night while setting it up and the rag didn't come off black so who knows. I'm in the crowd that wishes they'd have used Richlite on these because personally I think it feels exactly like ebony while requiring zero maintenance. Ebony looks better on a marketing sheet though...

My overall review is that, while acknowledging I'm firmly in the honeymoon phase, Epiphone has really knocked it out of the park this year. They've been stepping up their build quality and QC over the last few years, and they've finally been given the materials and leeway to really take the brand to the next level. This is a great guitar at any price point, but at $670 it'll be pretty tough to beat. HNGD! Looks like a beaut, I'm gonna grab a black one eventually. Glad to hear positive first impressions, seems like a winner

Very nice! I assume these still come with no case?

musicmaniac said:
Very nice! I assume these still come with no case?
Click to expand...

Awesome! Congrats and HNGD! I will own a black Custom!

What neck profile does it have? The Epi website says Slim Taper, but many of the NAMM vids said it was a 50s neck.

Also, can you please post a pic of the wiring cavity? Thx!

1all's Pub said:
Awesome! Congrats and HNGD! I will own a black Custom!

What neck profile does it have? The Epi website says Slim Taper, but many of the NAMM vids said it was a 50s neck. Looks stunning ! Sorry to say, but something made me laugh. Center tuner post washers bleeding over the binding are reminiscent of a fake Epi

DrBGood said:
Looks stunning ! Sorry to say, but something made me laugh. Center tuner post washers bleeding over the binding are reminiscent of a fake Epi
Click to expand...

HNGD! Nice. Next you'll be saying it has thick binding on the headstock like fakes too!

diskotekno said:
HNGD! Nice. Next you'll be saying it has thick binding on the headstock like fakes too!
Click to expand...

LOL ... absolutly not. I love the whole new 2020 Epiphone line. That just catched my eye.

Alpine White AND Ebony for me please....WOW does that look great!!!!

Not gonna lie, I'm really having a hard time deciding between white and black.

JohnnyPhatsaqs said:
Not gonna lie, I'm really having a hard time deciding between white and black.
Click to expand...

Now isn't that a bitch of a decision. I had to make that decision myself. 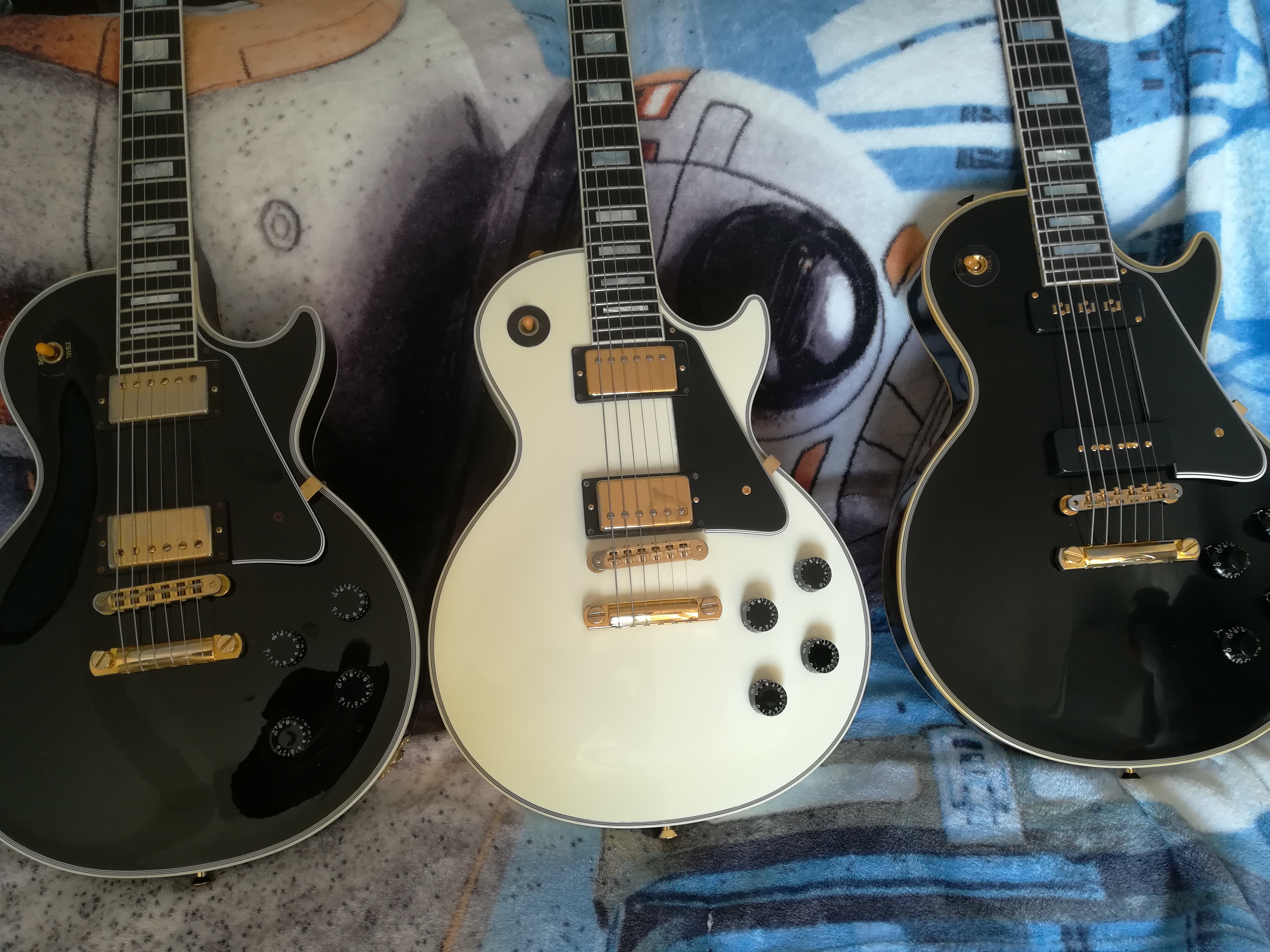 LOL. I know that's what's going to happen. The white is just so classy, the black is just so metal. May end up black first, then a month or two later with the white.

The white is nice, but I think it would be cool if they came out with an aged white variant. That would be hard for me to pass up. In the mean time I'm getting the black one.

Congrats. I've been eyeing old Grecos and Burny's ... but this is nice. Very nice. The fact that it's a dark fretboard makes me very happy.

Who/where has/had them in stock?

Wow, congrats on the new custom. That is one seriously hot looking guitar.

You touched briefly on the pickups - how is the tone?
You must log in or register to reply here.