Good evening fellow MLP members. I'm happy to announce that I have recently acquired my first Telecaster. A short backstory... When I was in college, I was always that guy who said, "I'll never own or give two s**ts about a Telecaster. I don't have the time or patience to deal with honk and twang. At least not in this lifetime." Well, here I am, almost 10 years later with my first Tele. Needless to say, my friends are having a great laugh at my expense, as they should. lol

I can't even begin to express how impressed I am with the neck on this guitar. The playability is incredible. Plays like butter. I needed some versatility to my lineup, and this thing fits the bill. It'll be great for recording cleans (obviously) and overdubbing certain passages. I'm glad I got one of the last of the Am Std versions, cause GC just released their Am Pro version. I am not a fan of some of the new "upgrades." I don't like the narrow/tall frets, I prefer having 6 individual saddles, and I think that the belly cut is more comfortable. I don't a have a shred of Tele-purism in my being, so I couldn't care less about preserving historical accuracy (which is a fallacy IMO... but that's a whole 'nother story). Thus far, the only things I'm going to mess with is upgrading to Fender Locking Tuners and Schaller strap locks.

Thanks you for bearing with me through my dissertation of a post. Here are a few pics: 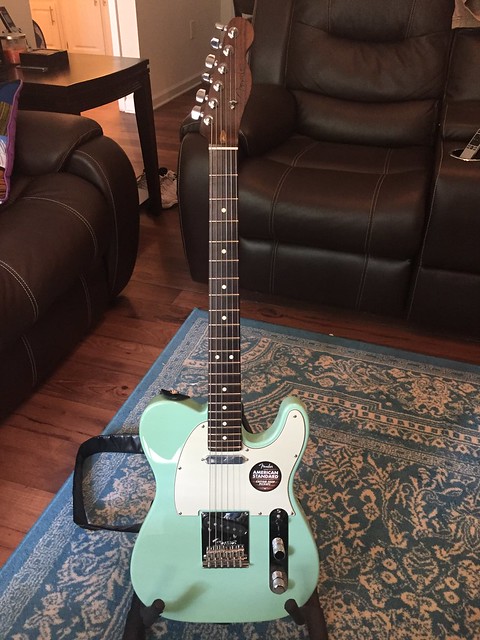 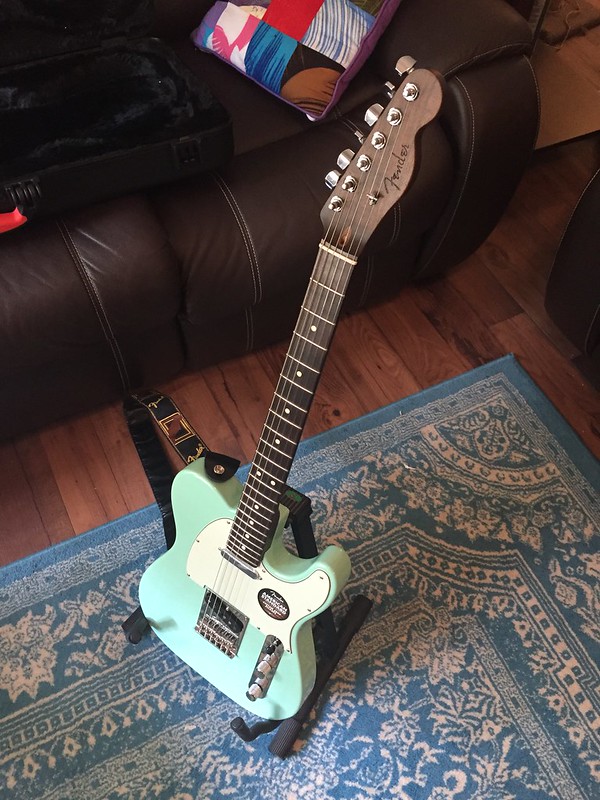 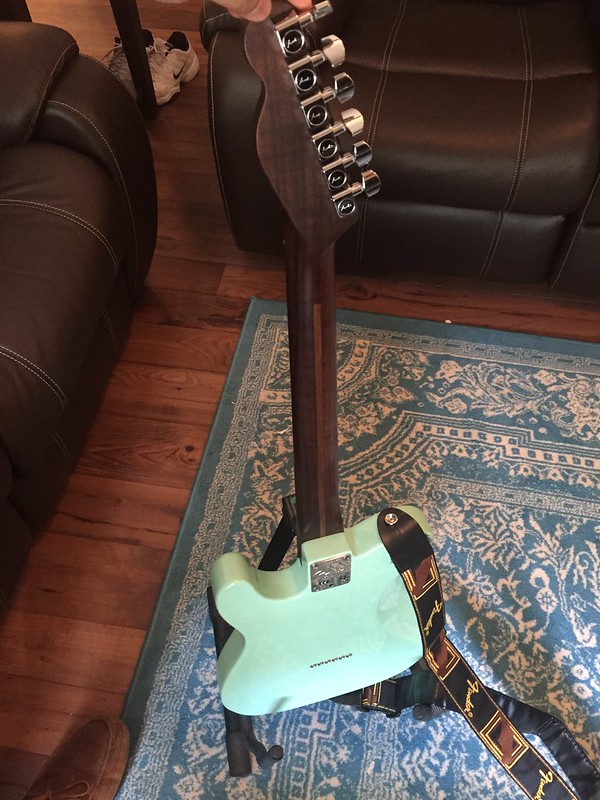 WOW! Last time we met you had that bowling ball beauty going in the oddfellow Les thread!

This is like night and day! Good for you! That is a beauty! And that cocoa colored neck.....

DarrellV said:
WOW! Last time we met you had that bowling ball beauty going in the oddfellow Les thread!

This is like night and day! Good for you! That is a beauty! And that cocoa colored neck.....

Yes, sir. Of course I remember. How's the "REDRUM" Lester? Now that's a head turner if I've ever seen one. Not too LPs look like a pristine 60s Mustang! Good to "see" you, friend.

And thank you. Nothing can take the place of an LP, but I'm in love with a Tele... Double dipping can get a man into some serious murky water, though. lol

Tele's are awesome, and that's a sick one you got there! Page played and loved both. No reason you can't as well.

clutchcargo said:
Tele's are awesome, and that's a sick one you got there! Page played and loved both. No reason you can't as well.
Click to expand...

Well said. It took me only 13 years to come to this conclusion.

Hopefully my next "enlightenment" will come at a sooner interval.

Thanks man. If you want one, get one sooner than later (if financial feasible, of course). Don't wait 13 years to give it a chance like I did. The tones that come out of this guitar, and the feel of the neck inspires me to play differently... very differently. It's so interesting how an instrument itself can make you want to play a certain way.

That will be collectable in the future given the new CITES regulations on rosewood.

That is so nice.

I guess I'll get one from GC.

kevinpaul said:
That is so nice.
Click to expand...

Thank you! It's an incredible neck. I now am fascinated with getting some more Rosewood neck guitars.

There goes all my money in the toilet.

I guess I'll get one from GC.
Click to expand...

THDNUT... I hope I'm not too late in telling you that there are a few differences between the two that can change the feel of the guitar. The $1450 model is the American Standard with a slightly lighter Surf Green body (the one I have), while the $1650 model is the American Professional with a slightly darker Surf Green body. Yea... they're both Surf Greens, but slightly different, which was annoying to find out when I was looking. Here's a quick contrast between the two:

American Standard Tele ($1450 model released in 2016; no longer produced)
American Professional Tele ($1650 model released in 2017)
I personally went with the American Standard. It was more comfortable for me to play. I prefer having the 6 saddles for more accurate intonation, I preferred the belly cut which made it a bit more comfortable, and I hate the narrow/tall frets on the newer Am Pro series. On top of the fact that it was $200 cheaper made it one of the easiest decisions I've personally made.

Another thing to help you out a bit. The following refers to the American Standard Tele ONLY (not the Am Pro). When I initially tried to purchase the guitar, all the local GC stores in Atlanta had sold out of them. When I went to buy one off the GC website, the purchase went through and it was stuck on "Processing" for a week. Come to find out, the online GC warehouse was out of stock on the $1450 Am Std models. So I called in to ask, and all I got was an "oops." After inquiring, they agreed to look for retail stores that may still have them in stock. Unfortunately, most stores around the country are out too. But there are a few stores that do have one left. When the customer service rep says, "I have one ordered for you sir," specifically ask them to tell you which store they're getting it from and the phone number. A lot of these retail stores are slow at updating their inventory. The first guitar that had been ordered for me by the rep had already been sold a few days prior, but the GC employees were a bit slow to update their inventory. But through due diligence, the next time around, I hunted down the guitar right after ordering it a second time on the phone, and it was in Tallahassee. For the next couple days, the Tallahassee GC staff had no idea what I was talking about when I told them I had bought it. The guitar was still up on the shelf as if it were still for sale. I had to call back customer service to specifically request them to pull it down. Apparently, because it's already sold in the GC system, their computer system won't let them sell the guitar, even if somebody tries to. Regardless... if you bought it, it shouldn't be messed with by anyone after that point.

Sorry for the long story man. I'm just trying to help you avoid dealing with the headache I went through over those two weeks.
Last edited: Jul 13, 2017

I can't see the belly cut on yours. The strap is in the way.

THDNUT said:
I can't see the belly cut on yours. The strap is in the way.

It may not look that dramatic, but I definitely feel the difference. Here's a picture I grabbed from google for you.

that finish goes great with the rosewood neck

I need another guitar like I need a wife

I just thought it was cool.

Thanks OP for posting, otherwise I never would have known these existed.

Benjammin said:
that finish goes great with the rosewood neck

I agree! It's a good contrast.


THDNUT said:
I need another guitar like I need a wife

I just thought it was cool.

Thanks OP for posting, otherwise I never would have known these existed.

Fair enough for sure. I can relate to that sentiment. Every time I think I'm in control, I lose the inner struggle. Damn that GAS.