Right. So really wasn't in the market for yet another Edwards E-LP after the John Sykes, but thanks to boredom and peer pressure (well, more like bargain-hunting buddy sending me pics of an Original Series Horizon II he scored for $650 on Yahoo Auctions Japan-- bastard loves to torture me with his massive scores), I decided to browse Yahoo Auctions through Buyee and found a 2011 125 ALS going for 45,000¥ in fairly good condition. Thanks to work shenanigans, I missed the deadline, so thought nothing of it.

Checked up a few days later and found it re-listed for even less, bringing it to well under $400USD, so I figured why not? Hit "win now for buyout price," paid via teh PayPal, and thought nothing else of it.

Now, here's the reason I didn't post this in the many other NGD threads involving Edwards ALS Les Pauls: Package gets to the Buyee warehouse, they pack it up, and try shipping it to EMS.

Well, EMS rejects the package for size limitations, and Buyee attempts to send it out via UPS. Shipping cost: $341.

Normally, the usual reaction would be to wig out and either start hurling abuse at Buyee or pay the exorbitant UPS fee and then proceed to passive-aggressively destroy Buyee's reputation on any of the guitar forums you frequent. Neither option would have gotten me what I really wanted-- my guitar without having to get financially anal-butt-raped by UPS.

Instead, I made a call to the buddy what got me in this predicament in the first place, and asked him what he did when faced with a similar problem. First off, he told me not to fly off the handle, and that secondly, culturally speaking, the Japanese pride themselves on excellent customer service and to that end will eventually accommodate the customer's wishes to the best of their ability within certain guidelines, and third, to be extremely persistent and realize that this may take days of back-and-forthing with Buyee's customer support and warehouse thanks to the time zone differences.

So first off I fired off a polite e-mail explaining that I felt the UPS shipping fees were much too exorbitant, and asked why the package failed to meet the EMS size limitations in the first place. Customer service had the warehouse take pics of my package-- turns out they triple-wrapped the guitar in that gigantic bubble-wrap that they use and stuck it in the biggest possible box they could find-- their priority being to protect the guitar from any damage (it came with a gig bag, but that was it) while shipping.

My response was that while I appreciated their efforts to ensure my guitar got to me undamaged, I thought they took it too far with the packaging and asked if they could remove that third layer of bubble wrap and put the guitar in a smaller box. Something was probably lost in translation since they said it wasn't possible-- to which I responded by sending them pics of previous unboxings I did for guitars I bought through Buyee what had smaller packaging (always document the unboxing, fellas. You never know when you're gonna need them, especially for claims and what not).

Anyhoo, this went back-and-forth for a couple of days after that, with said buddy reminding me not to sperg out and just being persistent while being polite. After a few more e-mails, I responded that while I respected their efforts to insure the safety of the ALS, to me, I would be willing to risk damage with less packaging if it meant reduced package size and lower shipping cost.

I suppose that was the magic key-- to let them know that you'd be willing to waive any claims of damage for a smaller package and less shipping cost. After that, they readily agreed to re-package my guitar and send it EMS, after informing me that they were unable to refund the Standard Plan package protection even after I waived all rights. At this point, I was fine with it. Wasn't willing to pay more for the shipping than for the guitar. Someone else might be a stickler on principle or Asperger's or whatever, but I was willing to risk some damage for less shipping, knowing what I knew about Japanese sellers.

So after the re-pack, the EMS shipping was about $100, which is a bit less than the usual, and this was why: 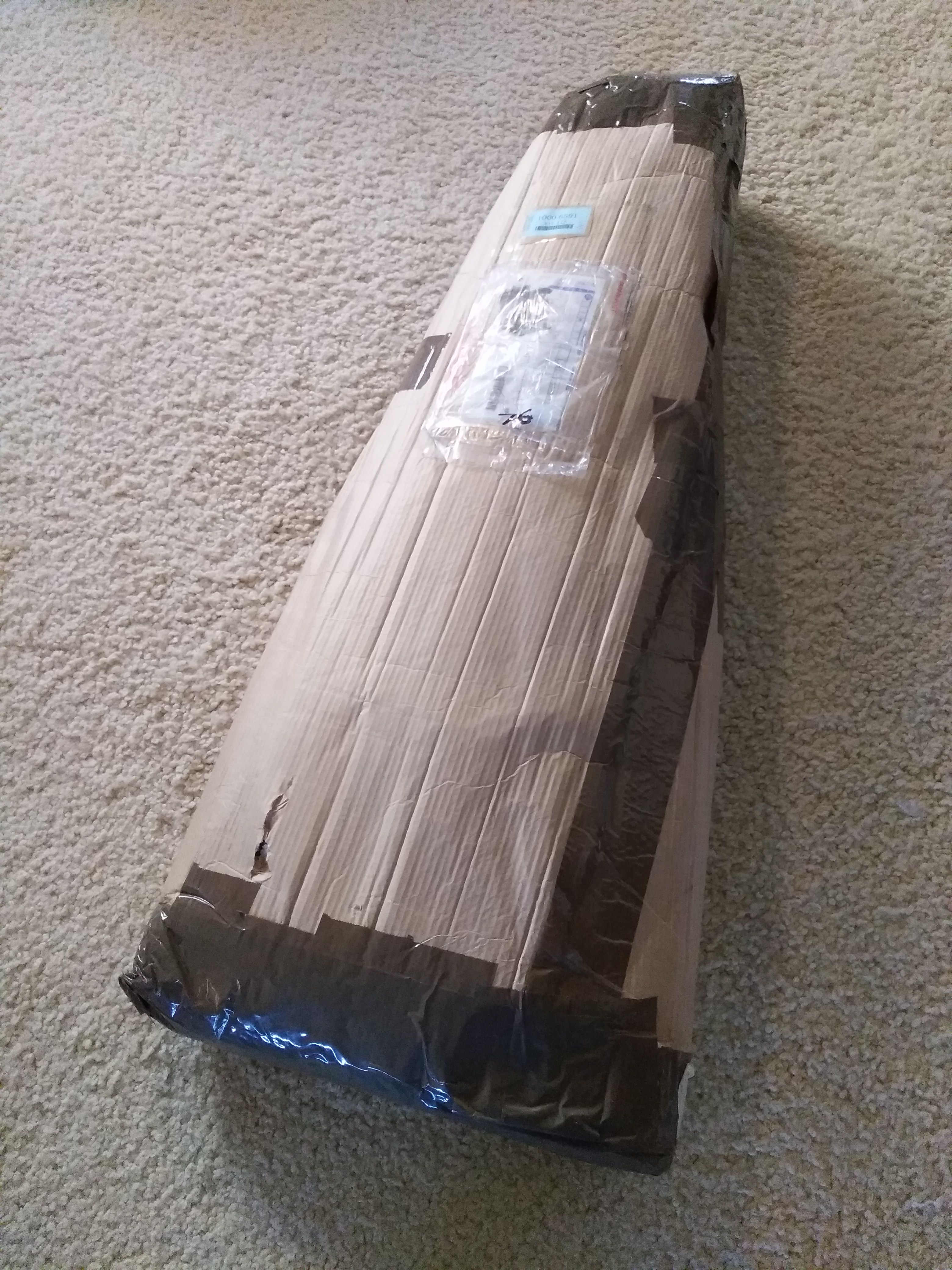 It seems they took my repeated requests to "reduce the size and weight of the package" to heart, as opposed to my initial request for them to just remove that pesky third layer of giant freaking bubble-wrap.

In doing so they replaced ALL the layers of giant bubble-wrap with small bubble wrap, and wrapped some cardboard around it to hold everything together: 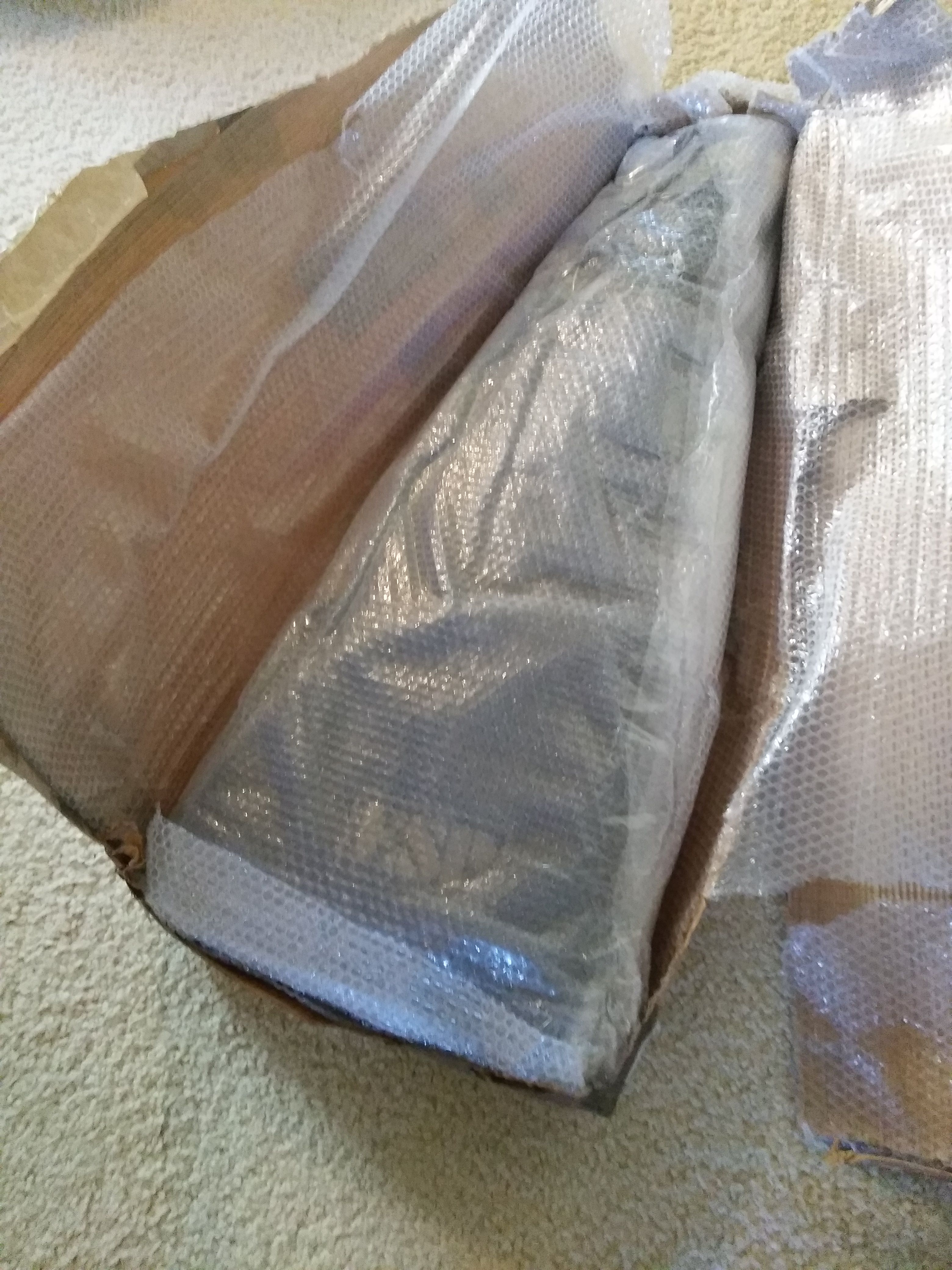 But, thanks to Japanese meticulousness, they did a rather excellent job of cocooning my Edwards in many layers of the smaller bubble-wrap: 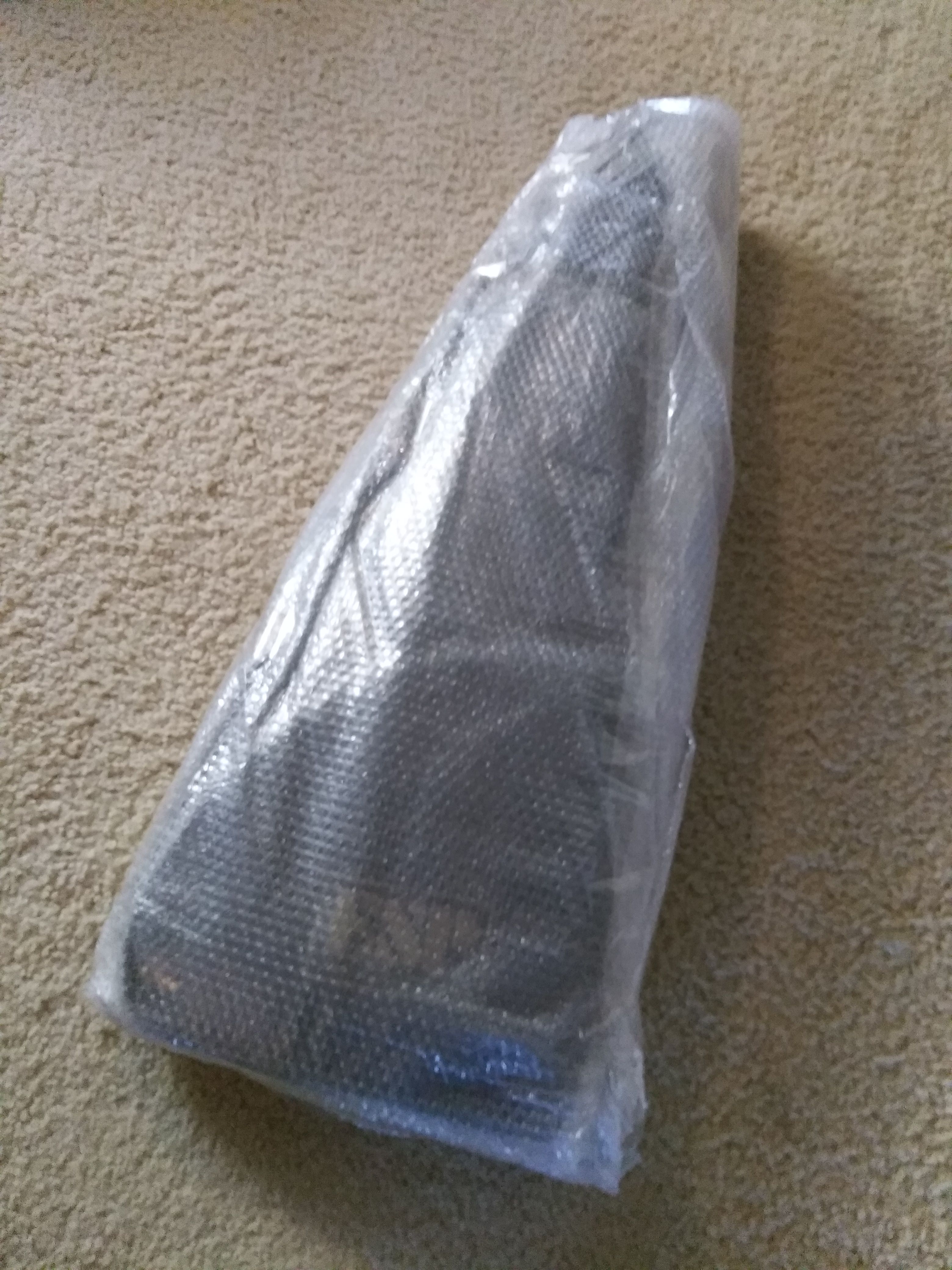 So why did I take the risk I did, besides not wanting to pay more for shipping than what I bought the guitar for? This: 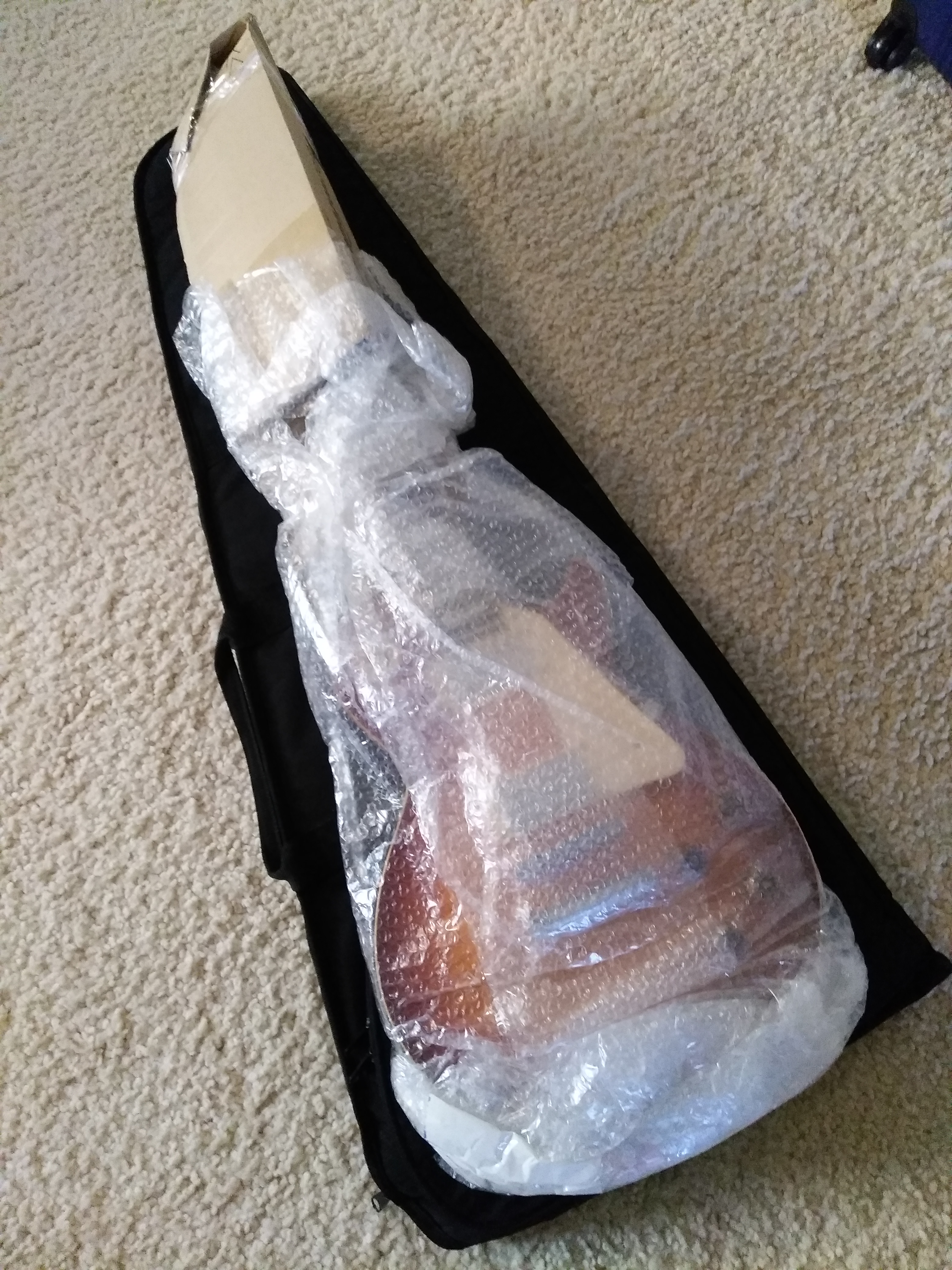 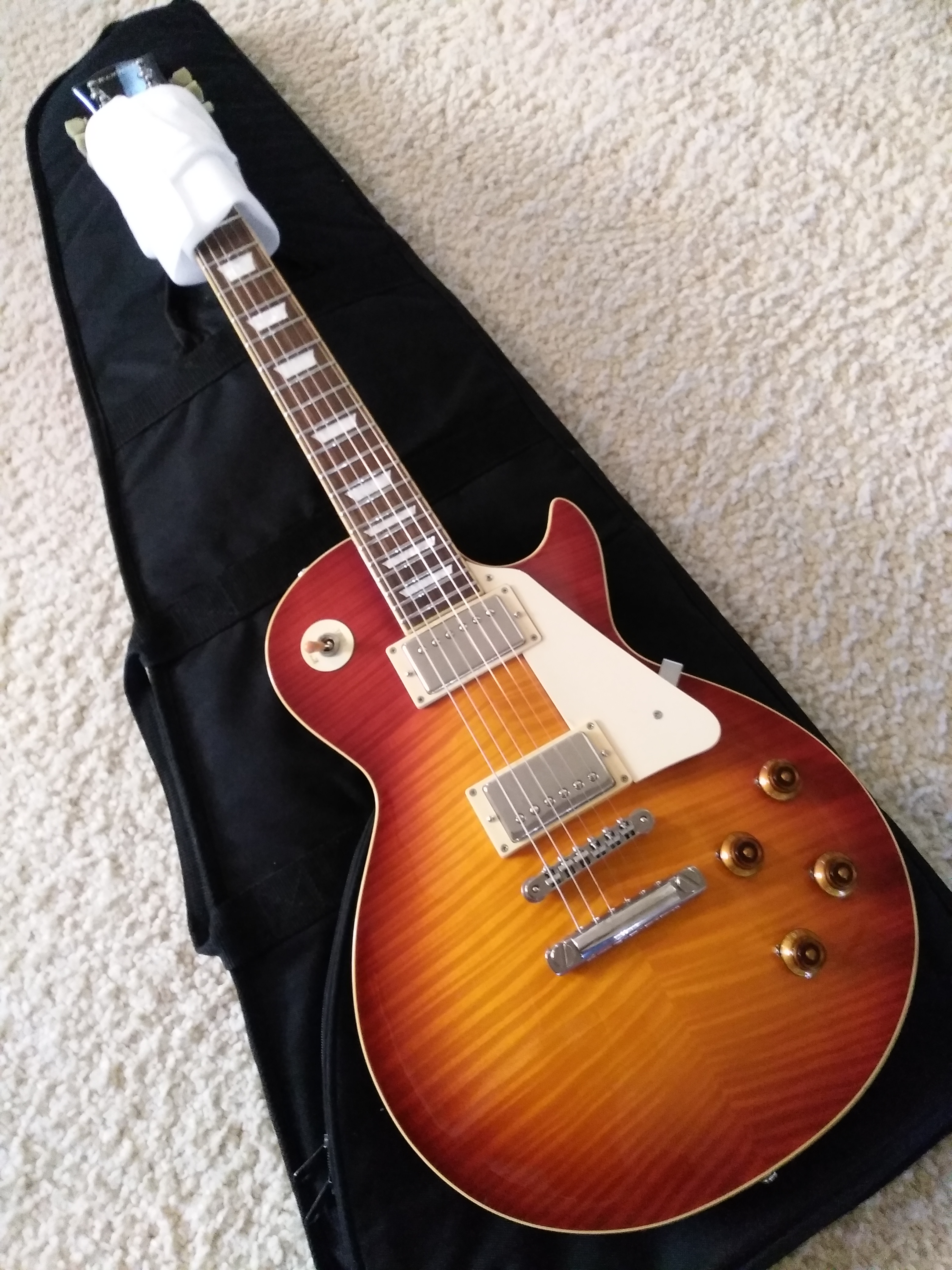 Just about every Japanese seller I've ever bought from has gone to ridiculous lengths to package their guitars for shipping in ways that the remedial-school mongs on fleaBay never would. Within the gig-bag that Buyee had cocooned, the seller had wrapped the headstock in thick cardboard and foam, reinforcing every failure and potential break-point, before wrapping the guitar itself in more bubble wrap and putting it in the gig-bag. There were much more cardboard and foam bracings and what-not, I just lost patience during the unboxing and unwrapping to take photos whilst screwing around with sticky tape sticking to everything.

So yeah, a week later than it should have got to me, I gots me an Edwards E-LP 125ALS. 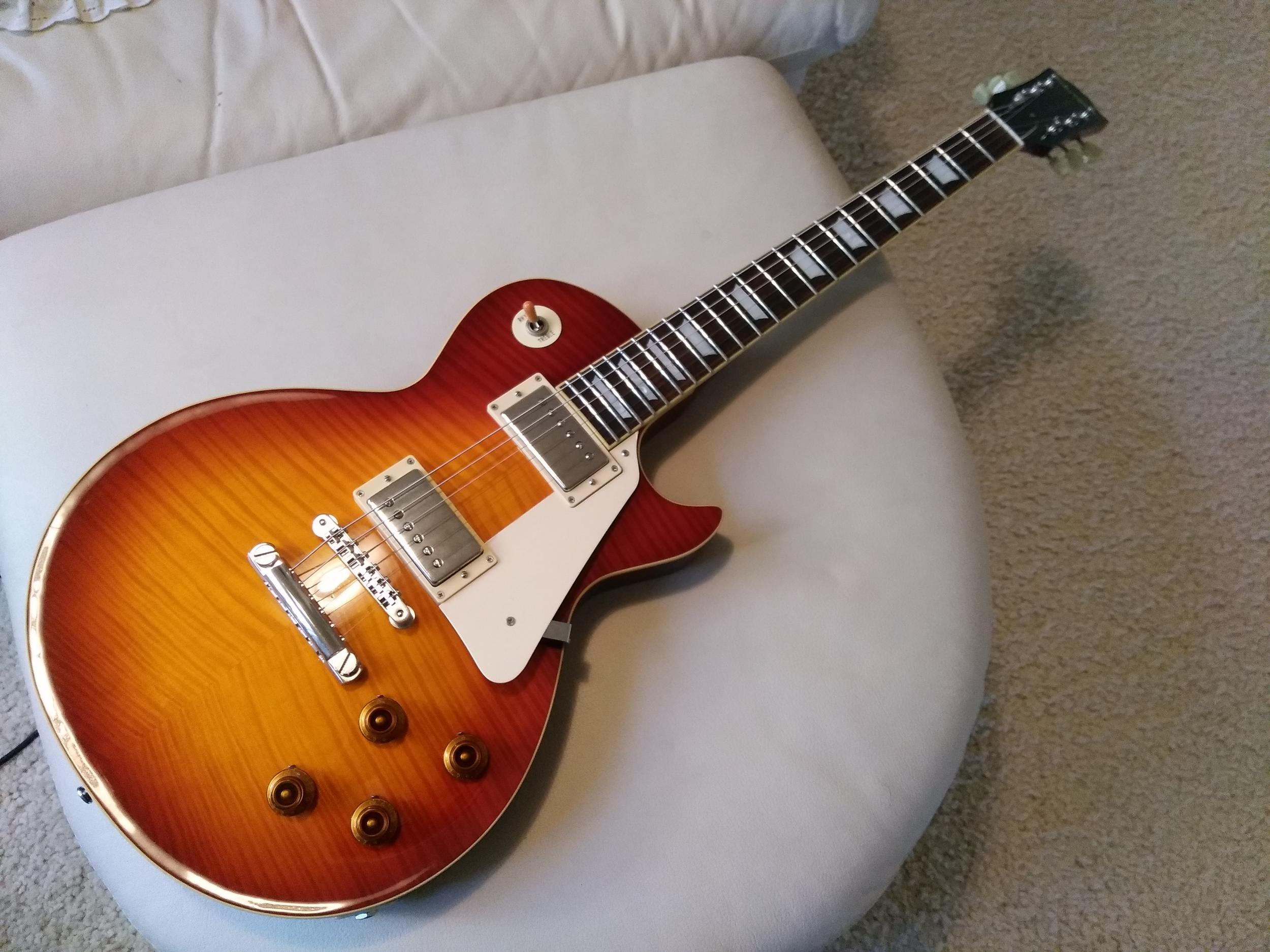 The TL;DR of all this is-- when you get hit with that size restriction and ridiculous UPS financial ass-rape, there are ways around it that may or may not be acceptable to you.

1. Don't sperg out.
2. E-mail Customer Service and explain that you believe the UPS fees to be exorbitant and you would be willing to forgo some packaging protection for lower shipping costs (don't emphasize size and weight reduction as much as I did-- they really took that bit to heart and I have to admit I was a bit nervous when I saw what I did in pic #1).
3. Be prepared to waive any claims of damage during transit as a result of the "reduced packaging," but realize that even minimal packaging by Japanese standards is way far beyond anything the average mongoloid on eBay would be willing to do while charging you $100 to send a tube amp cross-country loose in a box without any padding.

Anyway, guitar pics and impressions on the next post.
Last edited: Oct 28, 2017

After the unboxing, I took the guitar over to my tech's and had him give it the once-over to make sure there wasn't any structural damage I couldn't see. The guy is bloody amazing and one of the other reasons I took the risk-- I've seen him repair Gibbys with shattered necks such that you would never know the neck had been repaired unless he told you, plus he has a bloody brilliant finish guy on speed-dial. Anyway, not that that was needed, but he did the quick once over, tested the stress points and checked a few things real quick (I'd told him about the purchase after the funds cleared Paypal and put it in his queue for set-up).

Besides a few cosmetic dings in the back, damn thing was flawless-- no fretwear at all. Anyway, pics first, then stats and impressions: 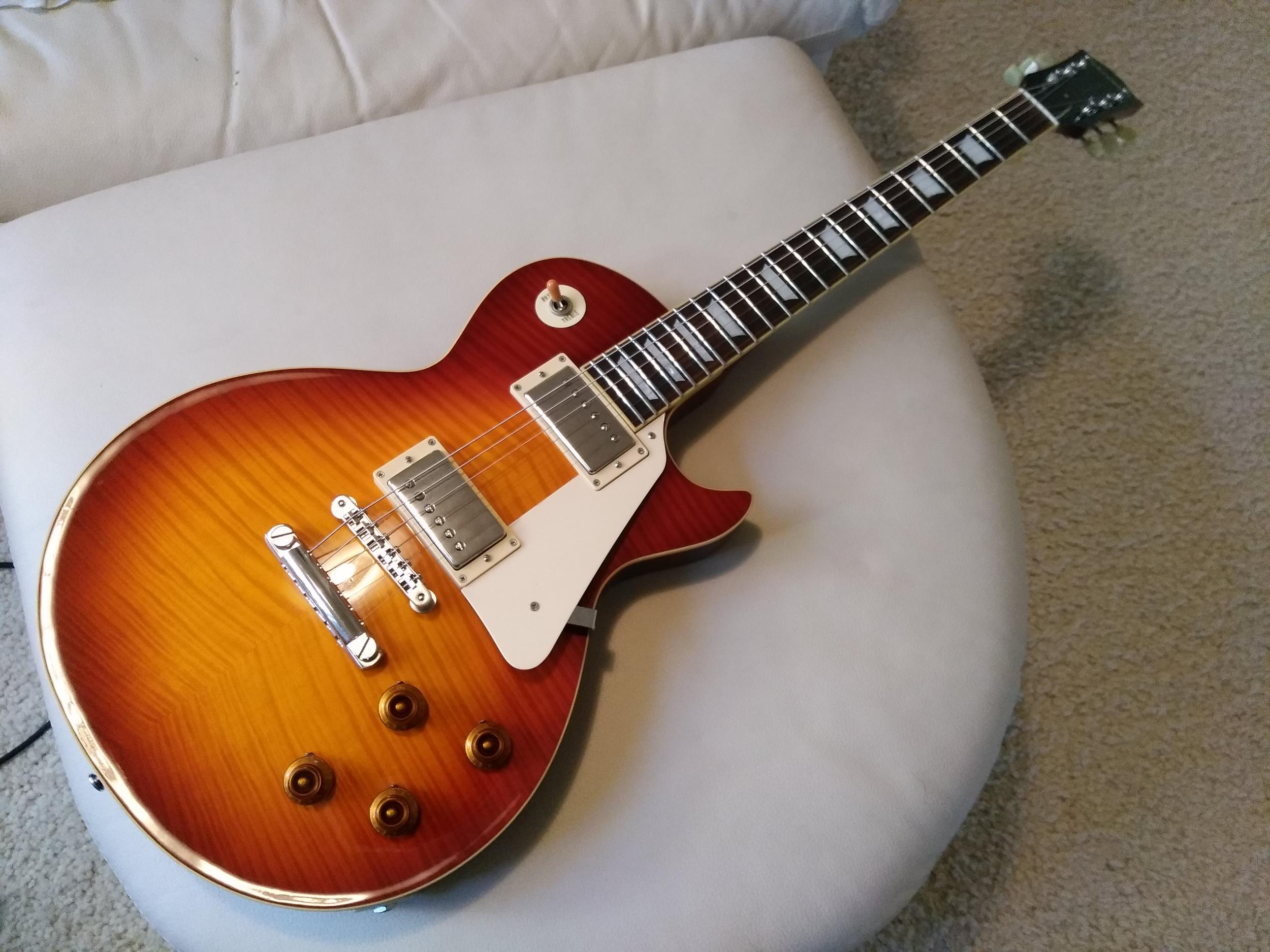 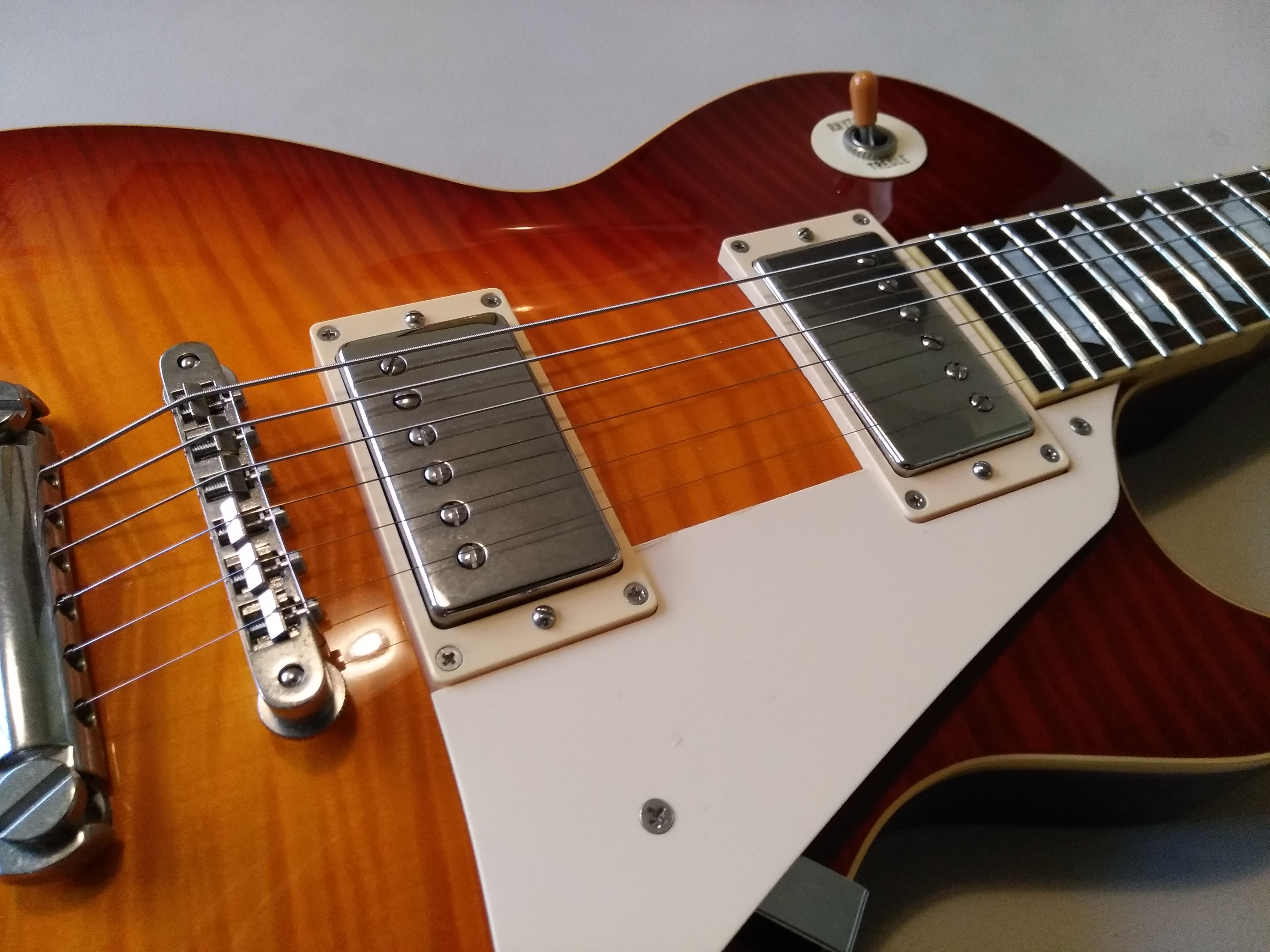 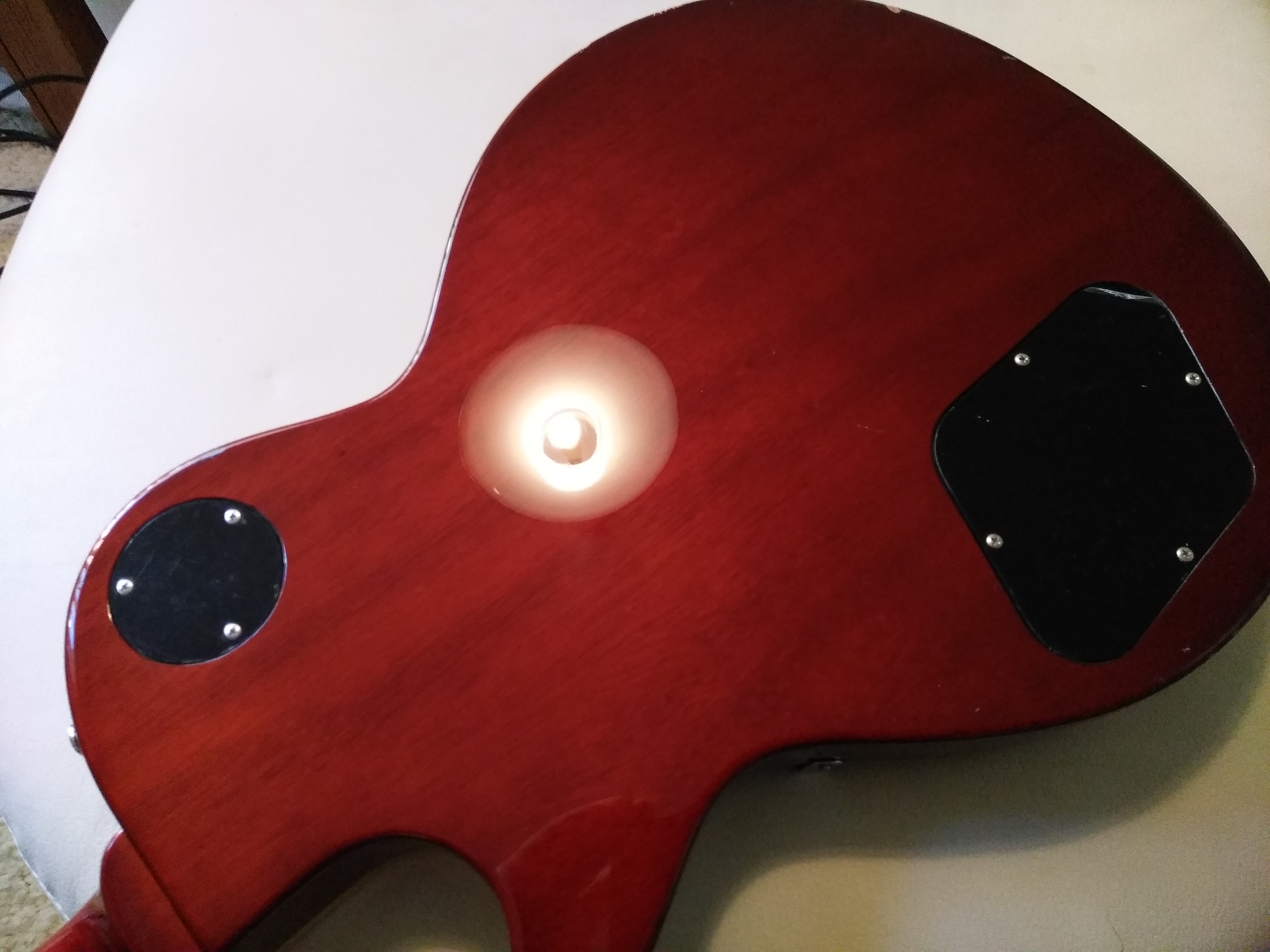 One-piece hog body is one-piece. Thanks to the small checks, chips and dings, I could see that the nitro coat was thin as hell, which was a bit reassuring in a weird way since this was one of the most buffed-out and polished nitro finishes I've seen, almost to the point where my tech initially thought it was poly. 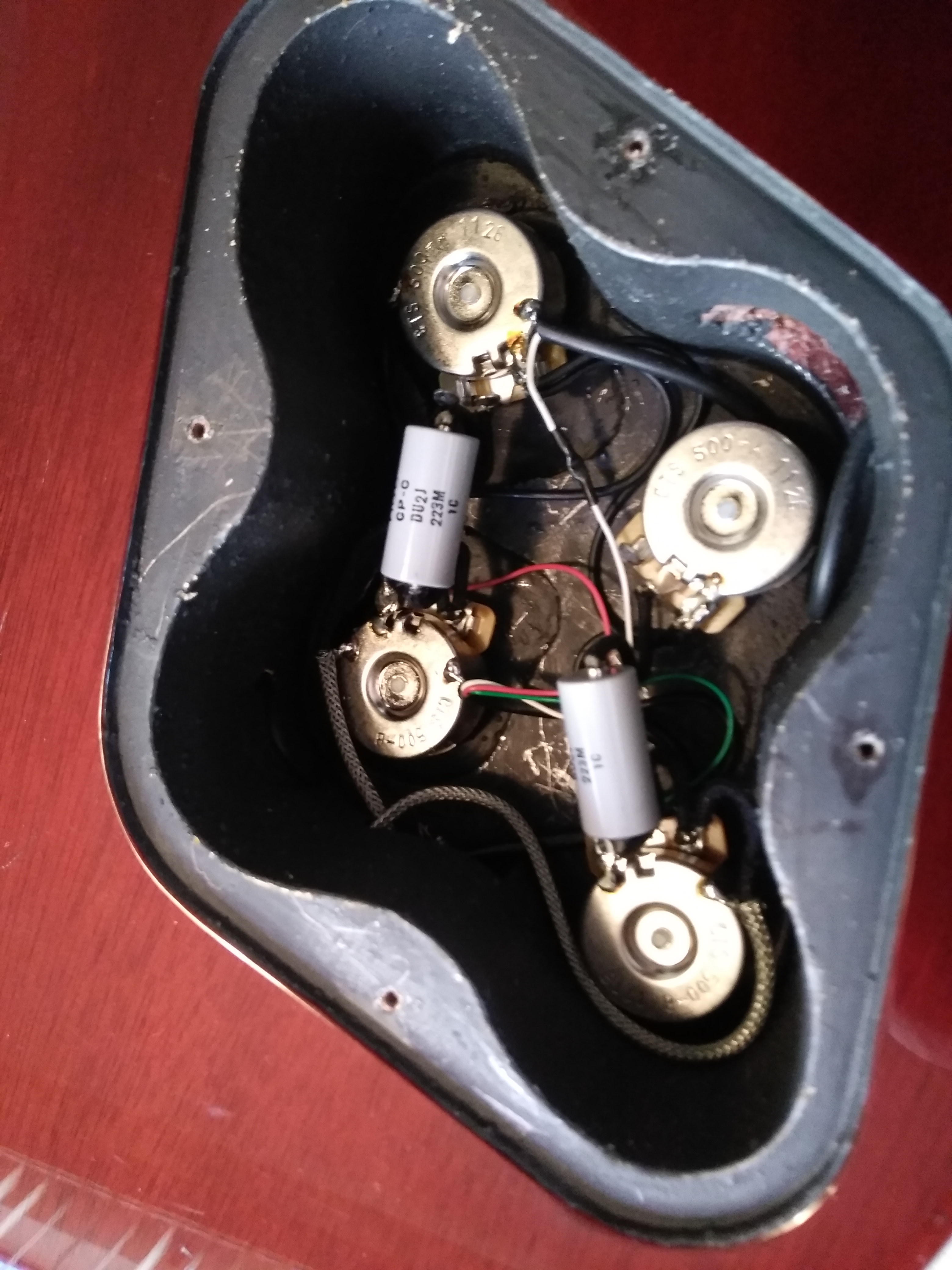 Old-school guts-- CTS pots and PIO caps. REAL PIO, not those fake bumblebees Chairman Henry and Gibson were trying to pass off as the real deal for $100 a pair. Not seen: Switchcraft Jack and switch.

Seths. Not pictured: Long tenon and slightly sloppy finish in the pup cavities.

So the action was pretty low and there was zero relief on the neck, so any hard strumming would have a bit of fret buzz. No fret-outs, though, from bends anywhere on the neck. Intonation were a bit off, but not unacceptably so. Not bad for getting shipped across the Pacific, any having to undergo packing and repacking in a Japanese warehouse.

Since scoring my own ESP Custom Shop Horizon II, I've been using it, along with my E-LP 70S (the early Edwards with allegedly Navigator woods), as the benchmark for testing all my Eddies. Gotta say that the old-school guts and Seth Lovers, plus fairly resonant-yet-light body (comes in at 7.8lbs) has made it so that the 125ALS holds up pretty well compared to the $6000 Horizon (well, $6K new, I got it for much less 21 years later) and a nearly 30-year-old Edwards. Whatever disputable effect the MAGICKE WOODES (swamp ash and Honduras Mahogany on the Horizon, alleged Navi kit body woods on the Edwards) only gives it a slight edge compared with the 125ALS.

Workmanship is top-notch, and the guitar sings, despite being ridiculously light for a Les Paul. Right now everything checks out and Imma gonna enjoy the hell out of this one and maybe do an a/b once I figure out how to technology with the recording on the computer internets and such.

Also, the Elephant in the Room: Yes, it does have a rosewood fretboard. It spent all of 11 minutes in Customs, according to the EMS tracker, and spent the majority of its time in transit getting to the local post office and getting to me. Was willing to risk it for the price, and willing to take a total loss-- but not for $341 shipping, which was another reason for pressing the issue with Buyee on shipping.

Anyway, my tech was so impressed by it he's currently searching Buyee for another 125 or 130 ALS for himself.

Congrats on your new Guitar and about thanks for detailing/picturing the packing!

Beautiful eddy. The ALS series ones are amazing value for money; I think I've unintentionally convinced my dad to get rid of his Gibson; he doesn't touch it when I'm not playing my Edwards! That's an amazing price as well, very well done.
You must log in or register to reply here.

NGD: ...So it looks like I joined a small, exclusive club (Early Edwards E-LP)