Glad there's an Other Guitars section here. I've been tangled up in LP style guitars for about a year and learned a lot of it here. I wanted to share my new love with you all.

First a little history for those unfamiliar with the Heritage name. This is from their website at heritageguitars.com and is their property. I am not affiliated with Heritage Guitars, other than as an owner of their instruments.

The Kalamazoo Gals of Gibson, 1944 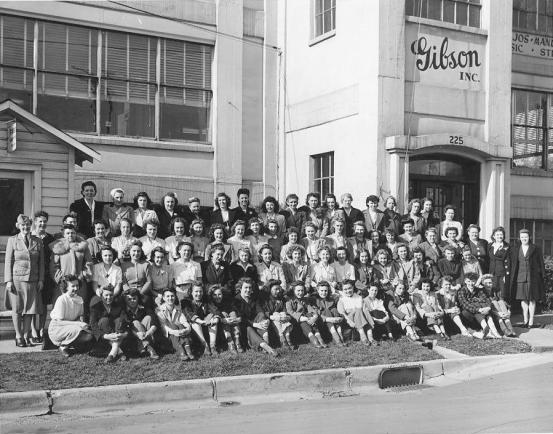 Current day as the Heritage Guitar factory. Still says Gibson on the smoke stack beside the building. ___***___
Heritage Guitar Inc. of 225 Parsons Street in Kalamazoo, Michigan was incorporated on April 1, 1985. The company is going on 25 years old, it has achieved the status of one of the premier guitar companies in the world today. It is, in many instances, the new guitar line handled by countless vintage shops throughout the world. This indicates it is thought of as the collectible guitar of tomorrow.

The idea to start Heritage Guitar began when the Gibson Guitar Corporation closed its Kalamazoo, Michigan factory in September of 1984 and moved all production to its other plant in Nashville, Tennessee (in operation since 1975). When this took place, some of the employees were asked to move to Nashville. However, since their families had spent many years in Kalamazoo, it made it difficult to uproot and move. Therefore 3 men, Jim Deurloo, Marvin Lamb, and JP Moats, decided to start a guitar manufacturing business. In 1985 when the company was incorporated, 2 other former Gibson Guitar Corporation employees, Bill Paige and Mike Korpak, joined as owners. Mike left the company in 1985.

The founders biggest resource is and was the group of craftsmen they could draw from to begin operations. The owners themselves each had in excess of 25 years of hands on experience in making guitars. To this day each of the owners is directly involved in the manufacturing of each instrument.

The first guitar Heritage introduced was the H-140 solid body single cutaway electric guitar. This model was shown at the NAMM show in June of 1985.

Since that time Heritage has added many instruments. Currently Heritage manufacturers Custom Carved Hollow Body Guitars, Semi Hollow Body Guitars, and Solid Body Guitars. This is to say nothing of the countless number of custom instruments made in each of the groups previously mentioned. Banjos, Mandolins, Flat Tops, and Basses, are no longer being produced because of the demand for the guitars mentioned in the above 3 categories.

Heritage is proud of its older employees with 25 years of average experience and what it has accomplished in 24 years. Heritage is also training younger luthiers to learn this fine art of craftsmanship.

So, now you know the story, here's the guitar. 2000 Heritage H-535 in Natural, built October 15th, 2000 as the first guitar of the day. Oct. 15th was a Sunday. I've confirmed that they work Sundays. Dedicated guitar guys or just no place else for a bunch of old guitar guys to hang out?

My pics, after a little elbow grease:

Terrific Owner's Club to go with it. Here's a post from the Heritageownersclub.com forum. It's from the 6th annual Parson St. Pilgrimage in 2013. It includes some fantastic photos from inside a factory.

Well, there you have it. Thanks for letting me share about my newest love.

Congrats on a beauty. Enjoy!!

Ive longed for a heritage for quite some time.. but can never seem to come across any on my local C-list.. and i dont do the ebay thing so thats that..

And great story with the old pictures. I am the happy owner of an Alvin Lee signature 535.

And great story with the old pictures. I am the happy owner of an Alvin Lee signature 535.

I noticed, it's not the one with all the stickers

I watched a video from Gibson talking about their new '59 Dot reissue. The guy made a big deal out the 'mickey mouse' ears at the cutaways, hot hide glue and nitro lacquer. He went on and on about how expensive the process was and how big a difference it makes. That's why it's $7299 retail and $6199 at sweetwater

I guess he's never been to the old Parson Street location to see that they still do all of that for a third of the price with twice quality.

It's yummy - as is every Heritage I've ever seen.

This is what the Gibson Nashville assembly line looks like:

They are wearing hair nets

This is what a guitar factory looks like. This is clearly a place where guitars are 'made', not just assembled.

No hair nets, old t-shirts for polishing and a buffing wheel that probably had a 1959 ES335 Dot buffed out on it in 1959

Why don't I see many Heritages talked about here?
2

NGD! A Kalamazoo Super Strat! The Heritage VIP I