Just thought I would provide a review of a screwless pickguard device I just purchased.
I picked it up off of EBay but he sells this on Esty as well.
I still haven’t figured out if I am keeping this guitar or not but in the last week I purchased a poker chip and this mount for the guitar as I am living as if I am keeping it. Who knows???

Anyway. This worked out really well for only $10.
I made a small dot where the screw would go through in case I one day use the actual mount so to avoid poutine the two sided tape there.

Only two issues:
1) The two sided tape is too thick near the neck pickup so it sticks out a little too much.
2) There is no way these screws are staying in place as is. I think a drop of Elmers glue should work and be reversible. If I were sure I was keeping the guitar with this you could use super glue.

There’s not much to it but definitely worth the $10.

If youre like me and love the way a pickguard looks on a Les Paul, but don’t want to drill holes in the body to mount it, then this is a great alternative. Protect the beauty and value of your guitar while still achieving the look you are after. I have handmade this mount based on all the articles,

These should be standard on all LPs.
I wanted to take my pickguard off but i couldn't cause of the holes

Maybe Im misremembering, but didnt Gibson, or some other company, make a Les Paul pickguard that just snaps into some pickup rings?

LP1865 said:
I wanted to take my pickguard off but i couldn't cause of the holes
Click to expand...

I've never been able to understand this...

Just put the screws back into the holes!
At least you'll always know where they are.


A little story to explain how I got here regarding a pickguard.

I bought my first Les Paul over 30 years ago.
It was used, a black '86 Standard, and had been in a closet in hot, humid, sticky Houston Texas for a couple of years.
Think I paid $500 or so - don't remember precisely - but it was cheaper than the going market prices.

A guy I worked with was married and had a kid, and simply didn't need it anymore.
He overheard me talking about guitars one day and offered it.
Excited, I decided to take a look at it.

He brought it to work, laughing that he had to completely unstack a closet in a spare bedroom to unearth it.
Said his wife had mixed feelings between the closet being spilled all over the bedroom and finally getting rid of that guitar.

So the black guitar?
We cracked the case open, and the look on his face went sour.
The black guitar was GREEN.
Covered in mold.
Dusty, powdery, and very clingy mold.

The case, not so much.

The strings were rusted to the point of looking like barbed wire.
Zero string tension.

I asked if I could take it home and clean it up and make a decision after, and he agreed.

So....
This is where I first got my hands dirty by completely opening up a guitar.
A big bottle of Windex and a full roll of paper towels were consumed as I removed every screw to remove every piece from the body, with the sole exception of the tuners. Oddly enough, the mold was only on the surface and not really in any of the cavities.
I got it shining, and started putting it back together with some confidence that I would keep it.
Put some strings on it, and got it plugged in, and it worked!

Looking at it with the cream guard off (I've NEVER liked cream anything as a color) and I thought it looked much better.
I remember thinking that a Les Paul was always supposed to have a pickguard.
I mean, every one I could remember seeing had a guard.
It looked kinda weird, but kinda cool.
I realized that it's really not needed with the arch on the top - I'm not gonna hit the body WAY down there.

But there's two naked holes.
Hmmmmm...
Having done mechanical work all my life, my instinct was to grab those two screws and put them back in the holes where they belong for safekeeping. I didn't want to lose them, and I DID NOT want to take a chance of them getting loose inside the case and chewing the guitar up next time it traveled anywhere.

I bought the guitar, and a few people who saw it (and had even less guitar knowledge than me) would point at one of those screws with curiosity and ask, "What's the screw for?"
Oh, that's where a plastic pick guard goes. Supposed to keep me from scratching the top. I left it off.
"Oh, I see..."

Fast forward over the next couple of years and everyone else I knew with a Les Paul was taking the guard off and trying decide on putting it back. They left those two tiny holes open, but EVERYBODY who saw the guitar would notice and point with surprise and disgust while asking, "Dude, what the hell happened here???"

That's funny, I thought.
Put the screws in, and it's a curiosity.
Leave them out, and everybody thinks the guitar is a piece of sh!t.

I've owned a bunch of Les Pauls since that one, and I have decades of recurring proof for my theory.
And cosmetically (and functionally) I'm pretty much a "pick guard OFF" kind of guy on all my Les Pauls.
Well, except for my Black Beauty. It's supposed to have a pickguard, as ornate as it is.

So next time you have the guard off, put the screws back into the body and then see how you feel.
You're welcome!

I did think of that, but it doesn't do it for me.
Maybe I'll give it another go...

Right on.
Depends on the guitar too.
Color, pattern and grain are personally subjective.

Pretty novel idea. If all my LPs didn’t already have the holes drilled into them, I’d get one of these for sure.

Do you think this would work for a P90 Les Paul?

Thrill said:
Maybe Im misremembering, but didnt Gibson, or some other company, make a Les Paul pickguard that just snaps into some pickup rings?
Click to expand...

Gibson Les Paul pickguard from a 2015 Les Paul Standard. Uses tabs that fit into slots on pickup rings instead of screwing into your Les Paul if its one of the more recent models without a guard. Somewhat rare/hard to get, as Gibson doesn't sell them as an aftermarket accessory like their normal ... 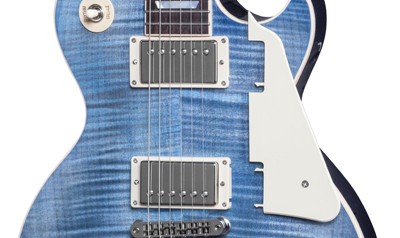 Those snaps in ones are cool and would probably fit lower / snug but:
a) you can’t find them anymore
b) would cost more (and require replacement rings)

Leee said:
We cracked the case open, and the look on his face went sour.
The black guitar was GREEN.
Covered in mold.
Dusty, powdery, and very clingy mold.

. . .
I got it shining, and started putting it back together with some confidence that I would keep it.
Put some strings on it, and got it plugged in, and it worked!
Click to expand...

Leee - I love stories like this. Do you have any before and after pics? If you do, share them.

01GT Eibach said:
Do you think this would work for a P90 Les Paul?
Click to expand...

I don't think so. This system works by using the 4 pickup ring screws on the rings that surround the humbucker pickups. A P-90 pickup doesn't have those so it wouldn't work.

Gibson Les Paul pickguard from a 2015 Les Paul Standard. Uses tabs that fit into slots on pickup rings instead of screwing into your Les Paul if its one of the more recent models without a guard. Somewhat rare/hard to get, as Gibson doesn't sell them as an aftermarket accessory like their normal ...

These were awesome. Too bad people freaked out about them and in my mind I just kept thinking, "that's why we can't have anything nice."

To be fair.... Les Pauls should have the pickguard on, so there's really no need to worry about holes.

Michael M. said:
Do you have any before and after pics?
Click to expand...

No, sorry.
I don't.
Like I said, this was 30 years ago - LONG before smart phones and digital cameras.
I probably didn't have any film for my cheapo camera anyway, if it had occurred to me to snap any pics.

I sold that '86 Les Paul for a modest profit not long after, and bought another black Les Paul Standard (a '93) that was in much better shape. I later sold that '93 to a friend of mine, and it came back 15 years later with a broken headstock.
It was repaired, reborn, and then repainted with the Gadsden flag livery.
(Note avatar pic)

If you have a Les Paul other than a Gibson or Epiphone, please email me BEFORE purchase. Thanks! Being a Les Paul owner myself and working in plastics, I decided to make an acrylic pickguard that mounts to your Standard, Classic, Custom Shop, Robot or Studio Les Paul pickup rings (Pat. pend...

The screwless/bracketless pickguards Gibsom used on the HP models for a few years were great. I thought that was a good solution. I wish they would sell them as an aftermarket item, seems they would sell quite a few. They show up occasionally on reverb, ebay, stratosphere. But are generally hard to find. The PU rings appear to be stock, just with notches cut to accept tabs from the pickguard. It's the pickguard itself (with the male tabs) that is the hard part to find.

Rando375 said:
In 2015 Gibson put them on the LP Traditional. There were 3 tabs on the pickguard that snapped into slots on the pu rings. They also came on some of the 2016-2018? high performance models
Click to expand...

You're right. I have a lefty 2017 HP and it came with the screwless pickguard. Really easy to attach/detach.
R

Thrill said:
Maybe Im misremembering, but didnt Gibson, or some other company, make a Les Paul , the pickguard that just snaps into some pickup rings?
Click to expand...

I think if some of you guys actually had a '15 screw less guard in your hands you wouldn't think it was so cool.