fumblefinger said:
Sweet! It looks like you got the hang of that spinning thingy...
Click to expand... 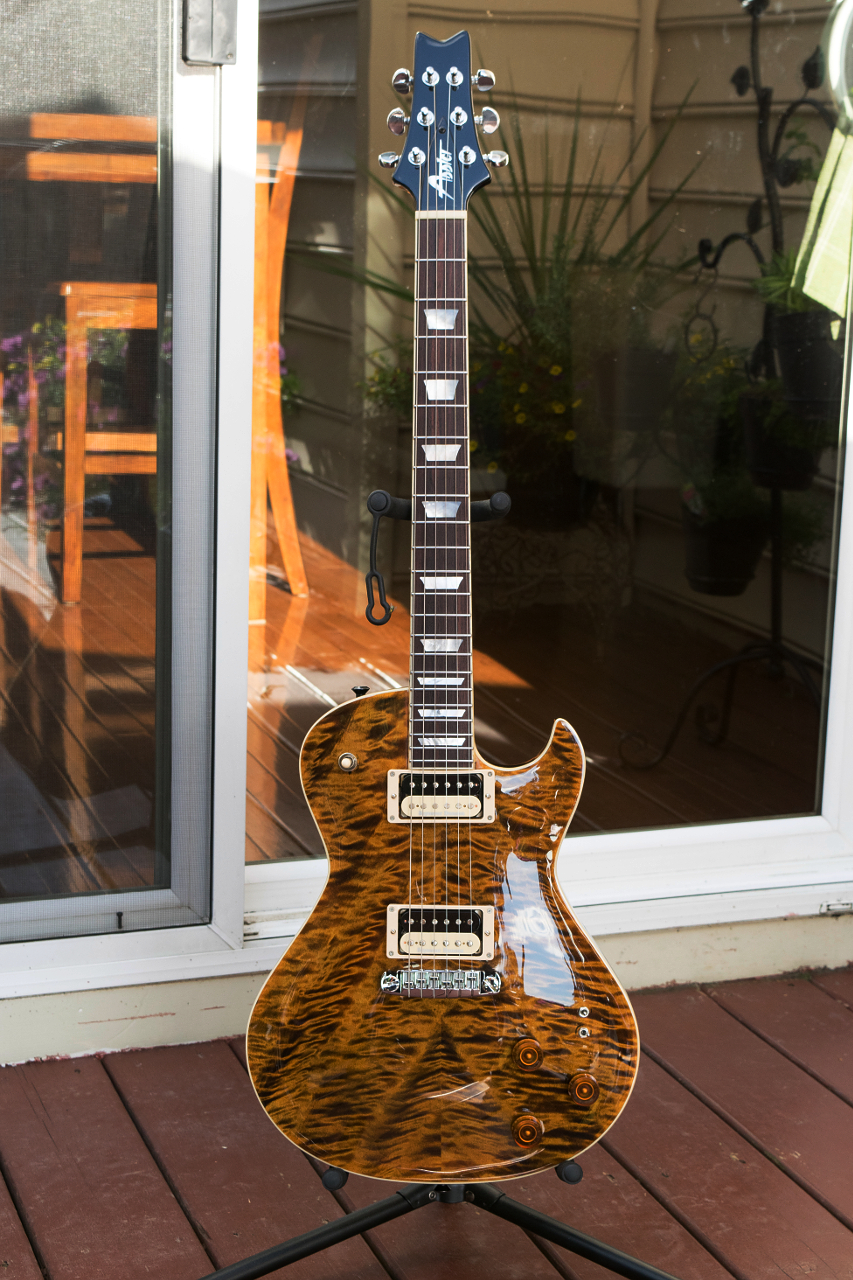 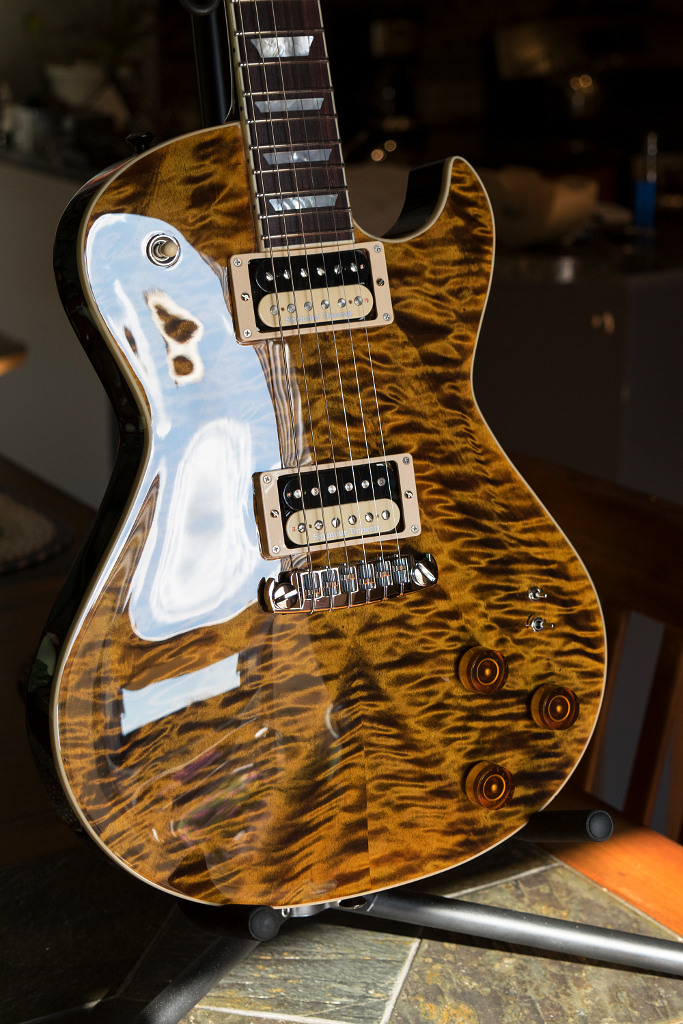 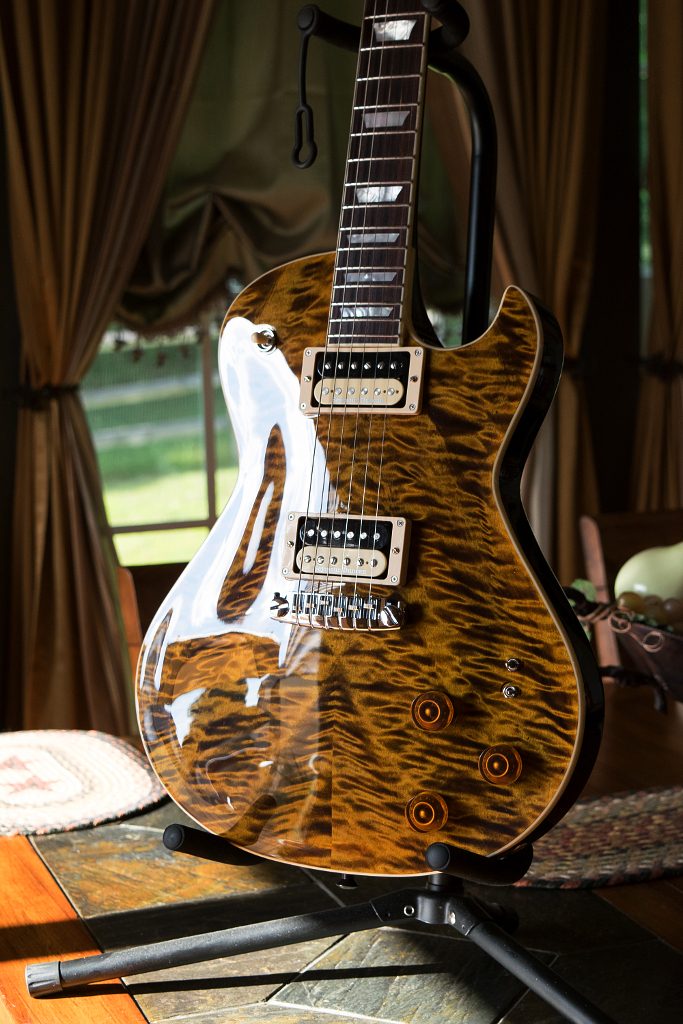 That is really quite stunning btw!

Baylin said:
Does it play like butter and sound amazing?

That is really quite stunning btw!

Thanks guys. I appreciate the compliments

Chris, don't want to hijack, but are you following the no-parachute jump sheduled for today?

Chris, don't want to hijack, but are you following the no-parachute jump sheduled for today?
Click to expand...

Yup. I've heard about him. I know a couple guys that have jumped with him.
Skydiving is a fairly small community.

I enjoy taking calculated risks, but I draw the line well before he does.

I'll be keeping my parachute on regardless of the outcome ;-)

Frets and ridiculously awesome paua inlays are done for the 3rd 22 Special build.

I put in the side dot markers and glued on the fretboard last night. Just need to place and drill the bridge, and carve the neck, and this 3rd baby is ready for lacquer... 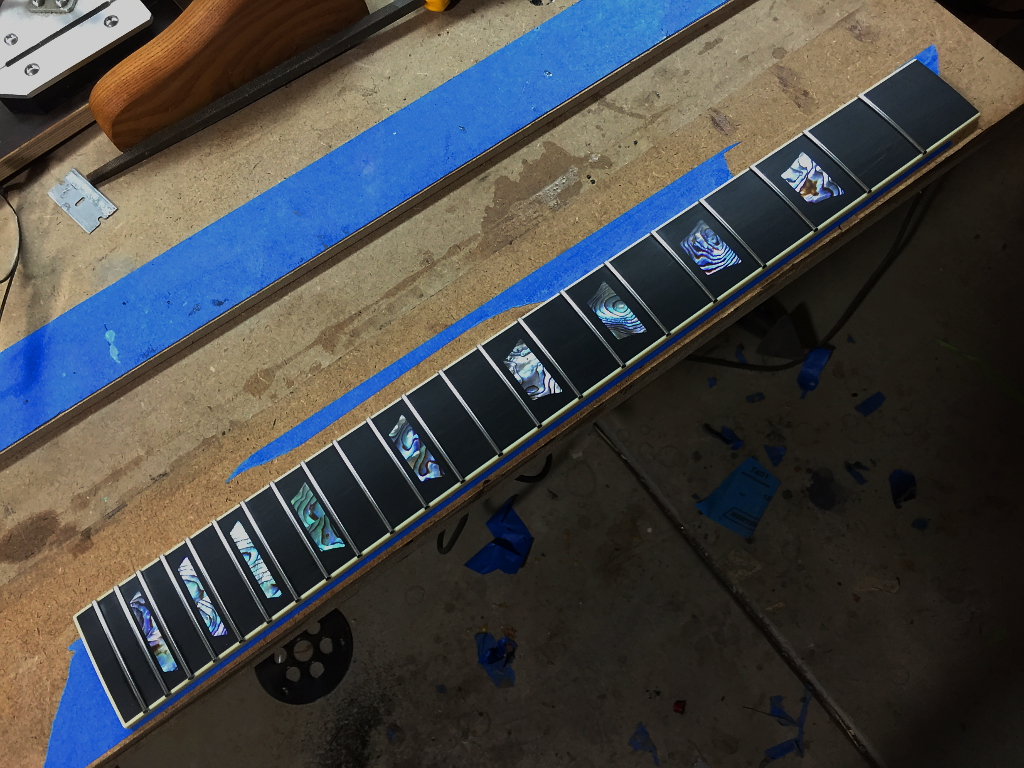 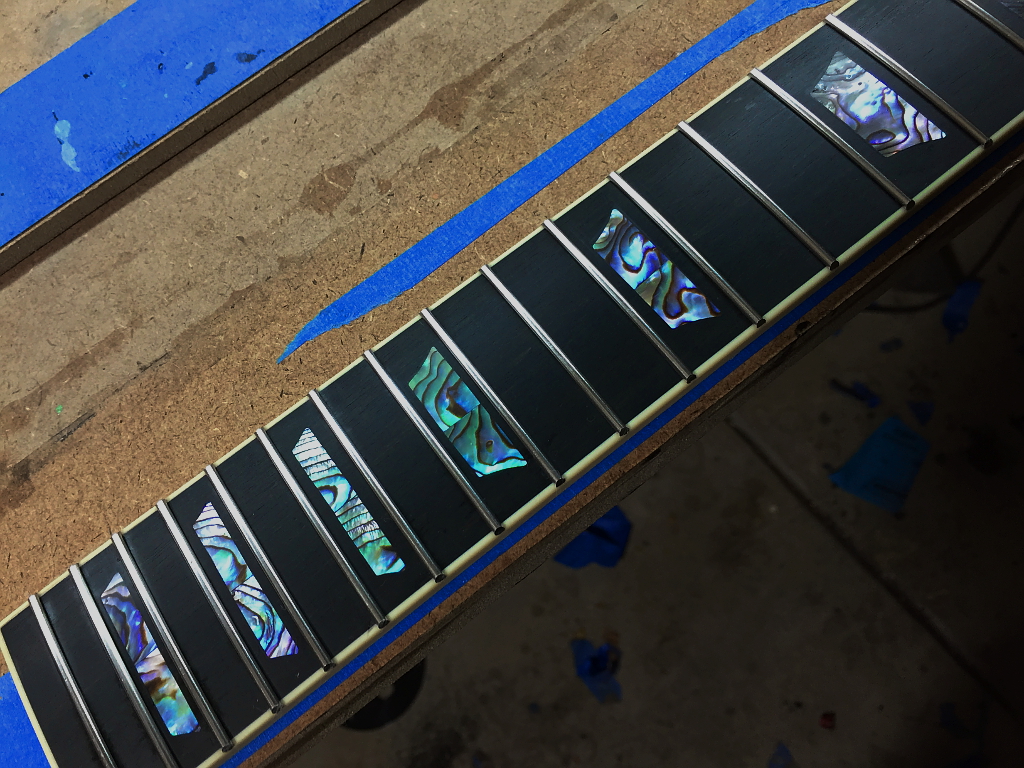 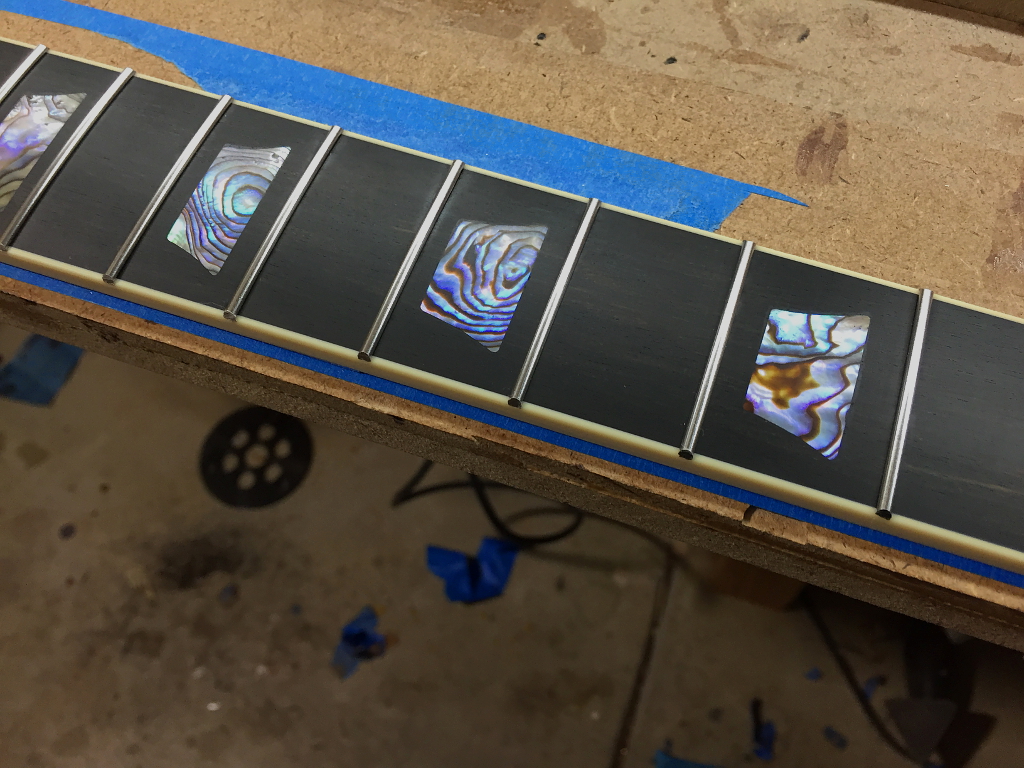 Wow. Those inlays are beautiful!

What a fabulous fret board!

Got my bridge placed this AM and mocked it all up.

Since it'll be a month before I shoot lacquer on this I'll likely wire it tomorrow and play it, but even acoustically it sounds as great as I expected. As I mentioned in another thread,
this guitar is nearly identical to the quilted one I just finished, and as expected this bridge even now is showing me that its far superior to the Schaller wraptail bridge on the other guitar.
Just sitting there its far louder acoustically and sustains far longer.

This is a Tonepros nashville bridge and tailpiece. I like my bridge very low. Just high enough off the wood to maybe slip a piece of paper under it. I did discover today that when they tell you the measurements for the bridge, they do NOT tell you that the studs actually add another 10th of an inch to that height which is rather a lot when you designed it with such tight tolerances and low bridge, so I compensated for that
by countersinking the studs a touch. The bridge is right where I want it now.

I'll probably swap the toggle knob with a black one as well.

This will also get a bone nut, not the graphite one thats there temporarily. I havent made that yet though, not the truss rod cover and rear covers. 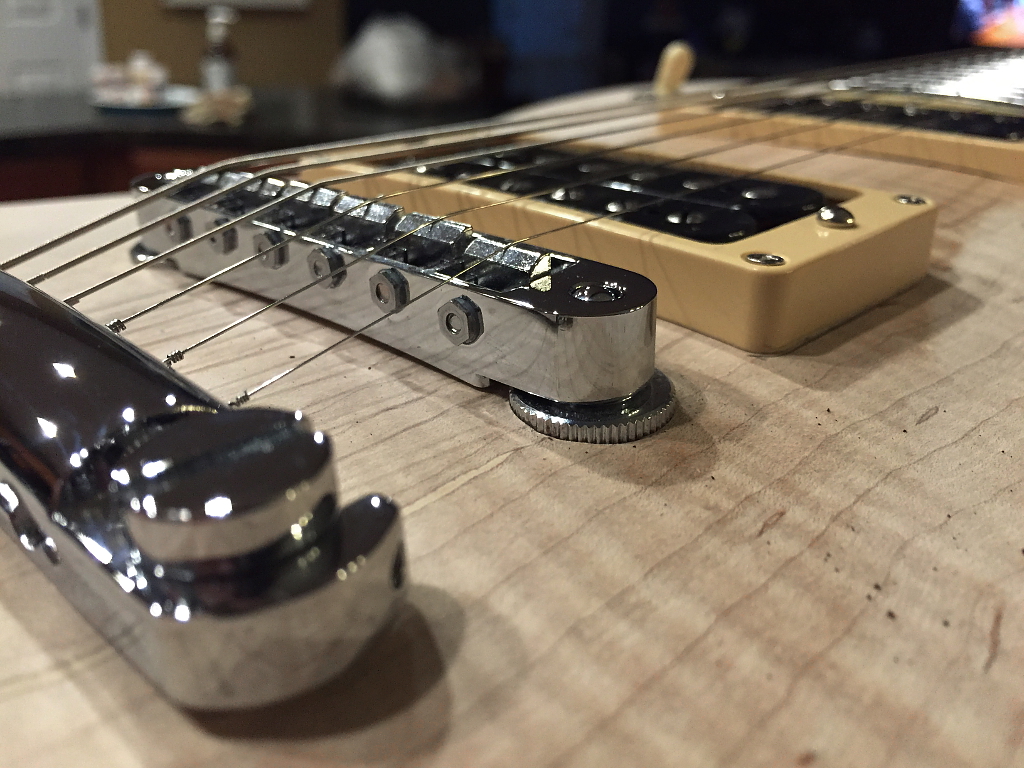 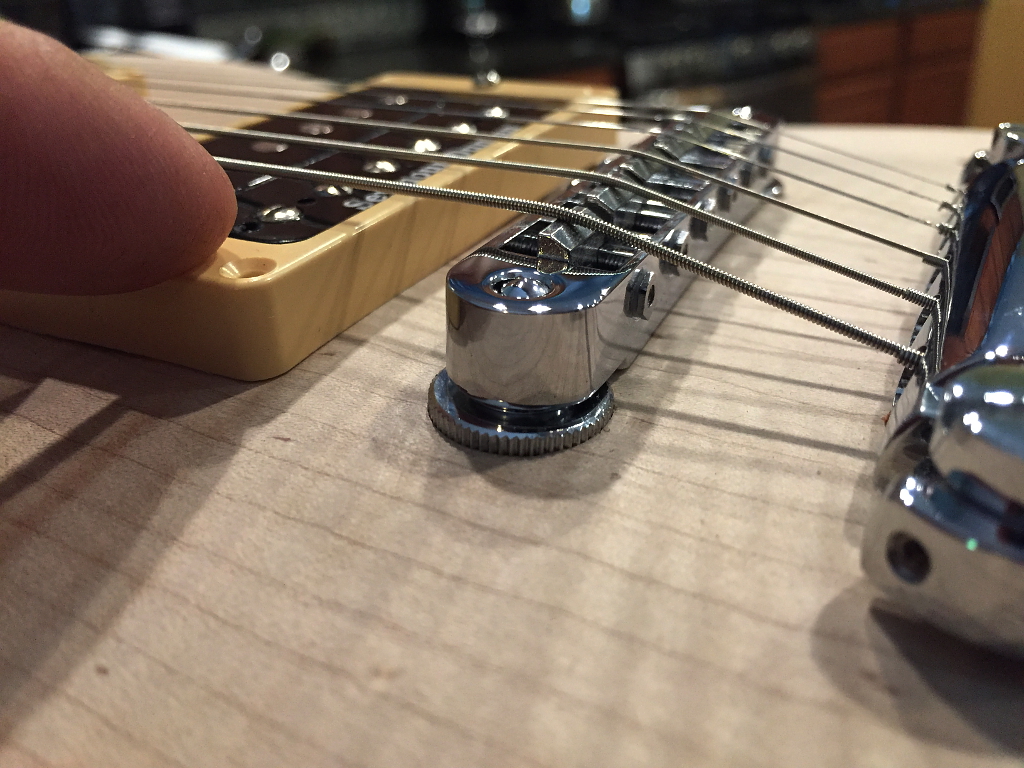 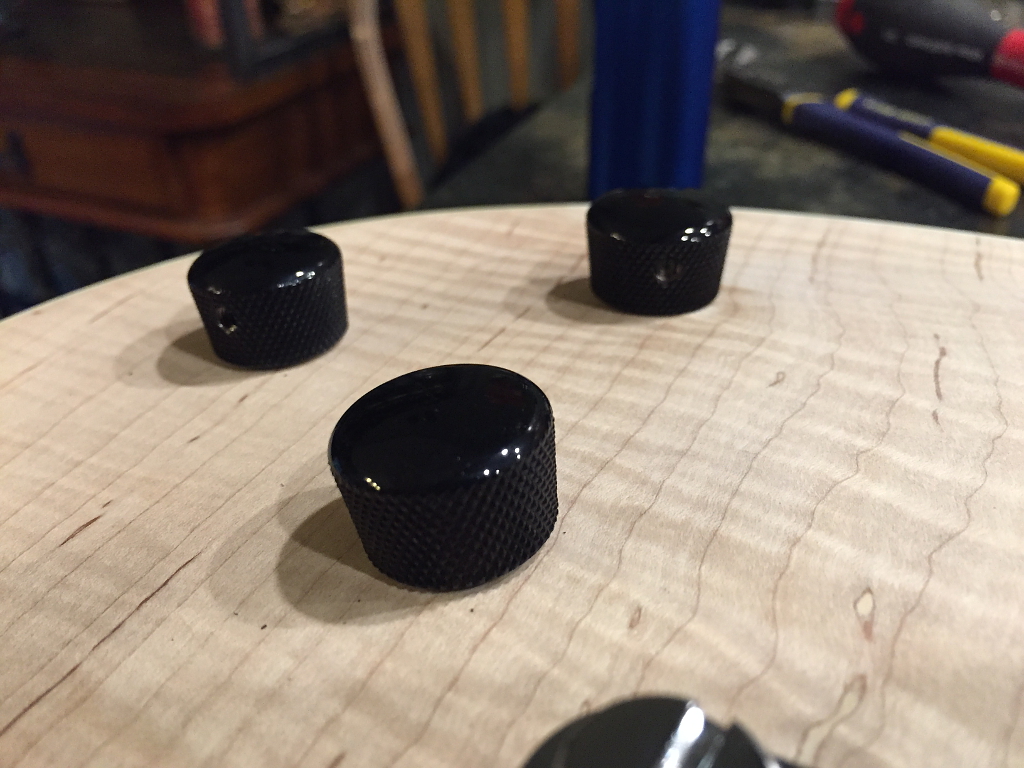 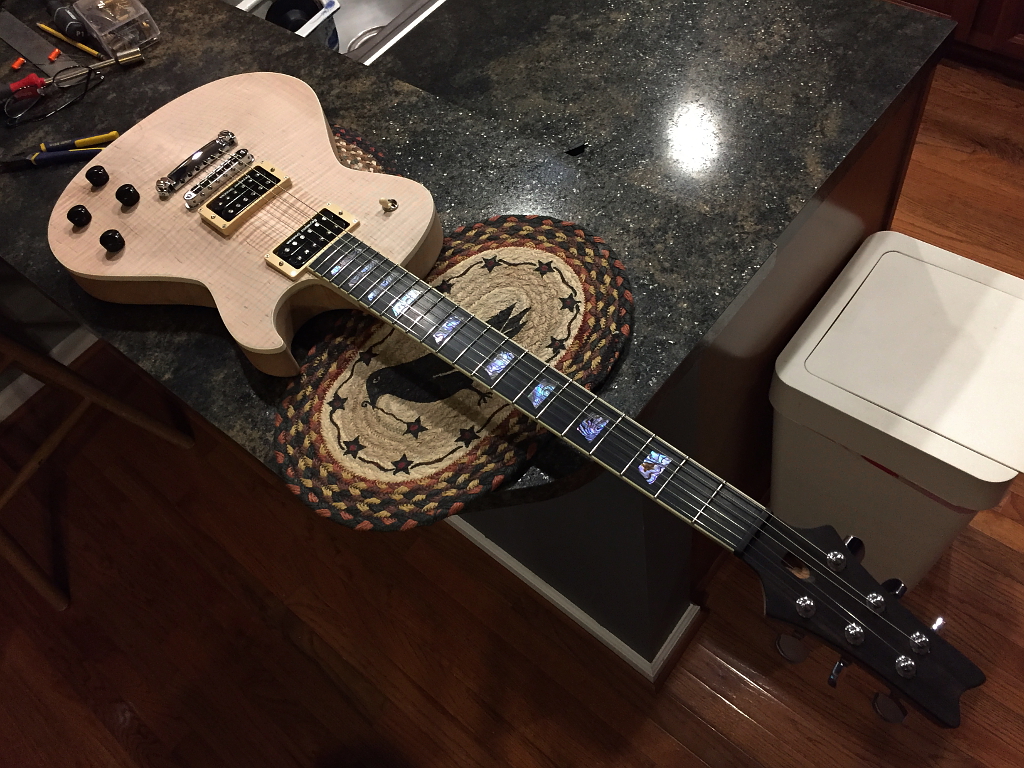 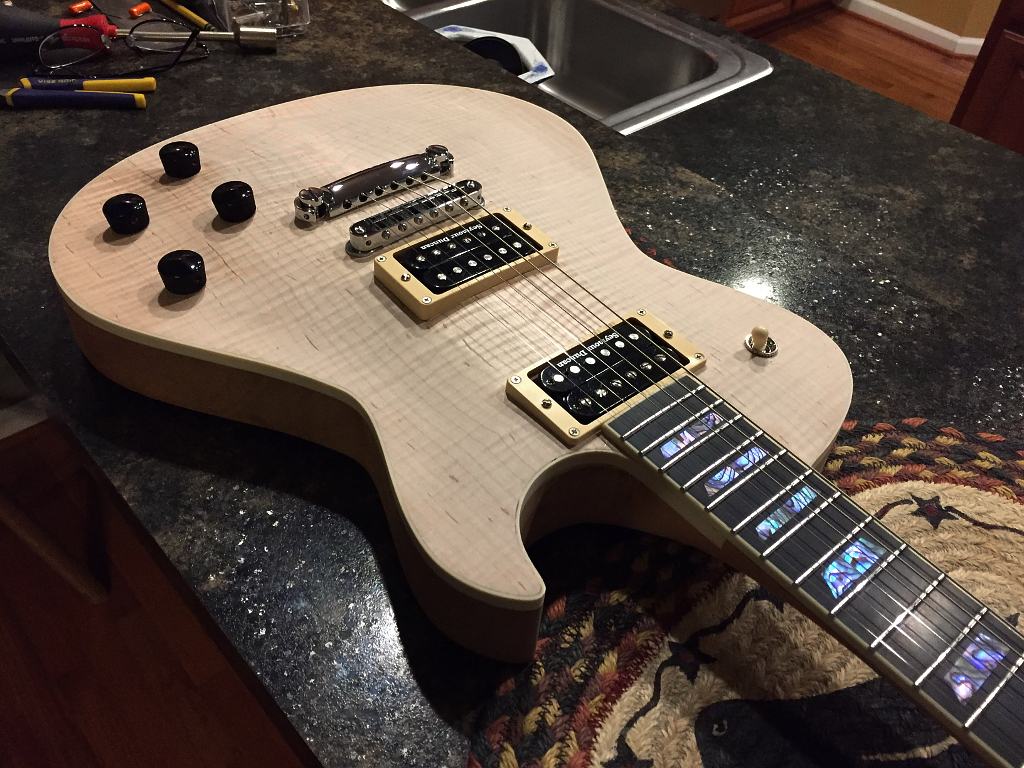 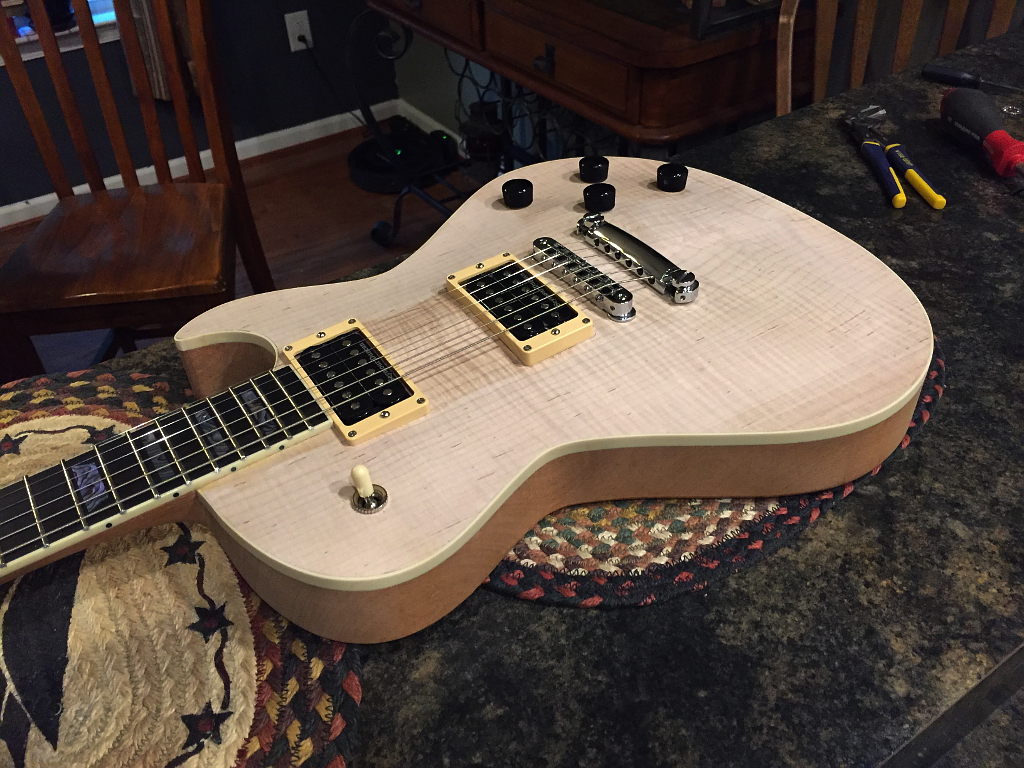 Of course I know it's the height of idiocy to suggest that anything might be wrong with the Les Paul design on this forum. I might find myself tarred and feathered and run out of town on a rail, but I do like to live on the edge ;-)

I think I pretty much hit the nail on the head with this one. I've got it all soldered up and just spent an hour playing it and it's definitely da bomb. I haven't even made a proper nut, nor done the fretwork,
But it plays clean on all strings and frets, and the action is low and easy to play, and it's got all the tone you'd expect from the thick Honduran mahogany body and neck, maple top, and Seymour Duncan JB and Jazz combo, and all the resonance and sustain you'd expect from carbon fiber reinforced, 3-piece laminate, neck-through-body design and because of the heel-less design and deep cutaway you can get to every last fret with appalling ease.

Previous shots are with my phone with has quite a lot of wide-angle lens distortion.

Still needs the inlaid TR cover same logo as the others, only this one is also matching paua abalone like the fretboard.

It'll have the same finish as the one I did for my son shown below it...

This one also has a much more pronounced flame than my sons. I think its gonna be quite a looker 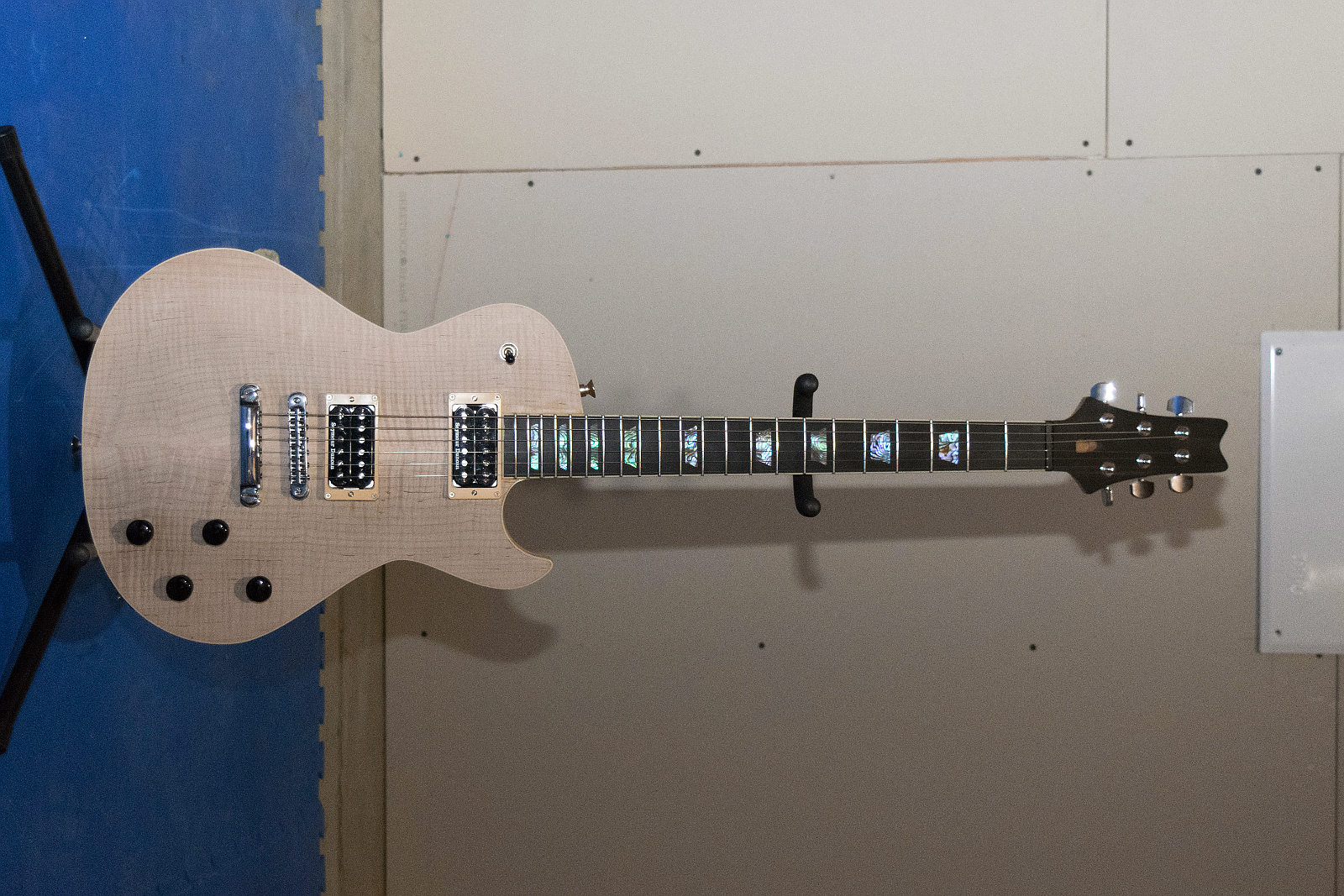 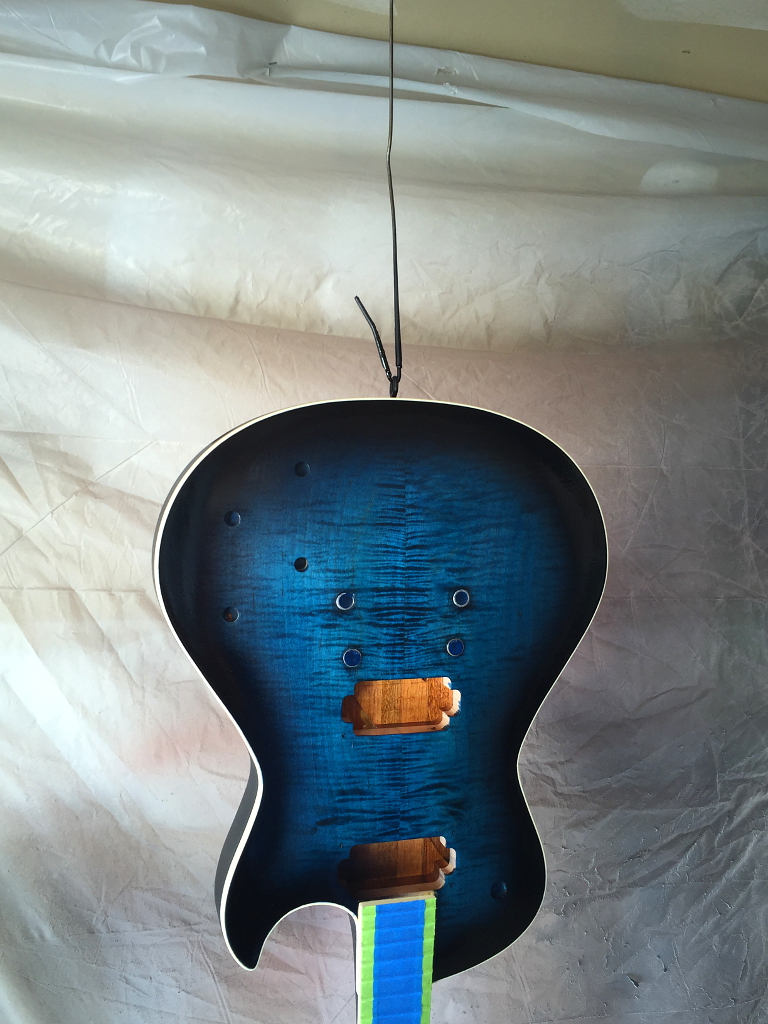 Another shot. This one shows the carve a bit better and also illustrates the coolness of the paua shell fretboard inlays. they really show off different colors depending on the light.

The initial fretboard closeups were under bright florescent lights in my shop, this latest one is under LED lighting in my kitchen 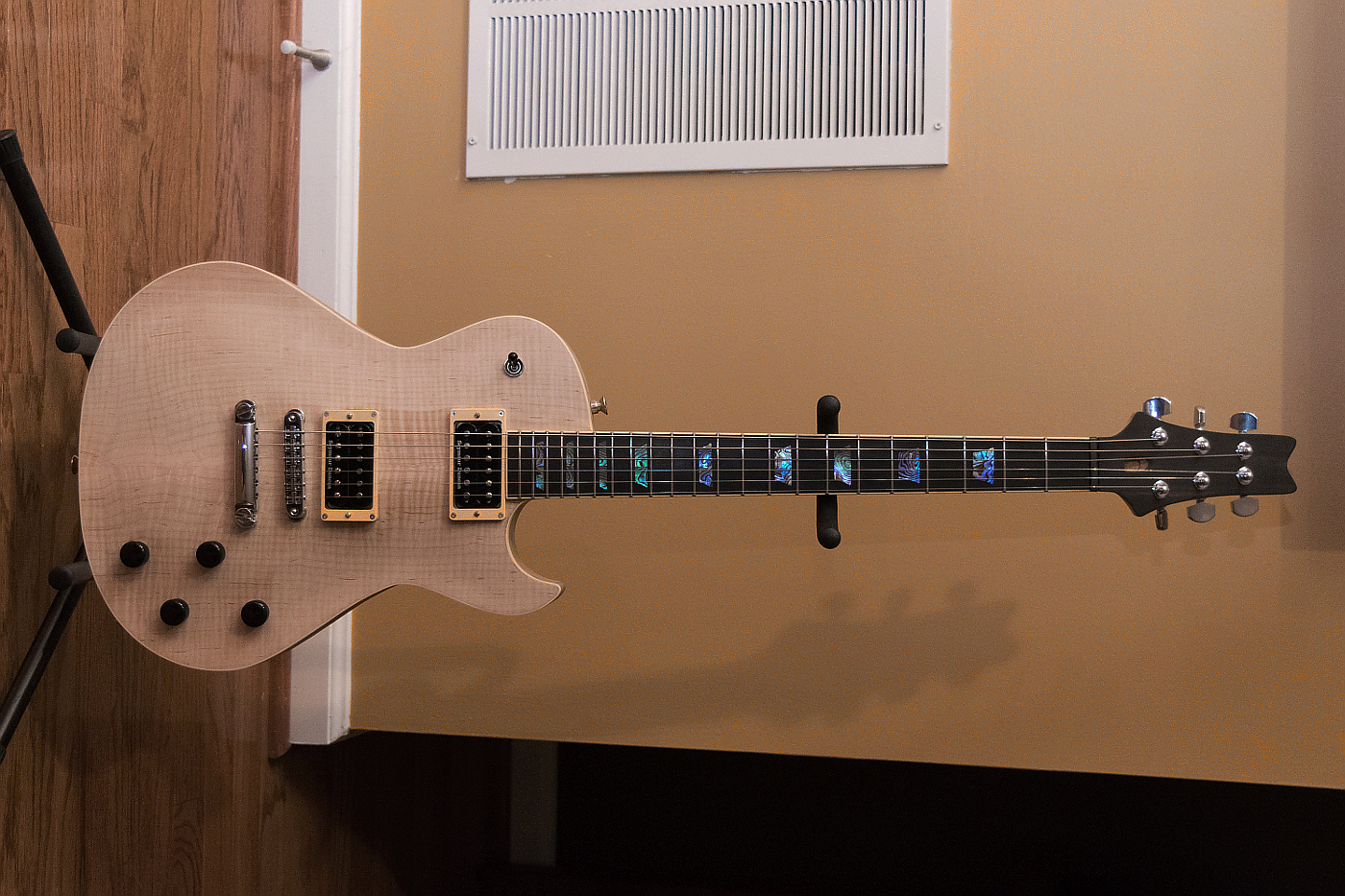