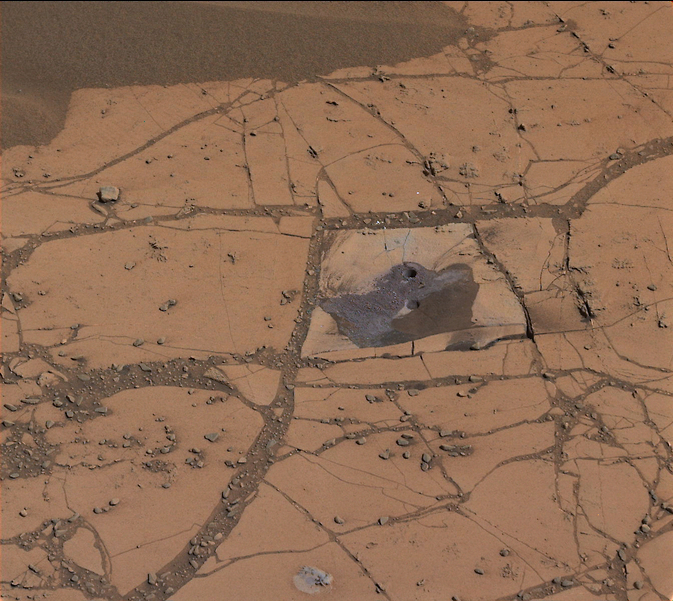 Reddish rock powder from the first hole drilled into a Martian mountain by NASA's Curiosity rover has yielded the mission's first confirmation of a mineral mapped from orbit.

"This connects us with the mineral identifications from orbit, which can now help guide our investigations as we climb the slope and test hypotheses derived from the orbital mapping," said Curiosity Project Scientist John Grotzinger, of the California Institute of Technology in Pasadena.

Curiosity collected the powder by drilling into a rock outcrop at the base of Mount Sharp in late September. The robotic arm delivered a pinch of the sample to the Chemistry and Mineralogy (CheMin) instrument inside the rover. This sample, from a target called "Confidence Hills" within the "Pahrump Hills" outcrop, contained much more hematite than any rock or soil sample previously analyzed by CheMin during the two-year-old mission. Hematite is an iron-oxide mineral that gives clues about ancient environmental conditions from when it formed.

In observations reported in 2010, before selection of Curiosity's landing site, a mineral-mapping instrument on NASA's Mars Reconnaissance Orbiter provided evidence of hematite in the geological unit that includes the Pahrump Hills outcrop. The landing site is inside Gale Crater, an impact basin about 96 miles (154 kilometers) in diameter with the layered Mount Sharp rising about three miles (five kilometers) high in the center.

"We've reached the part of the crater where we have the mineralogical information that was important in selection of Gale Crater as the landing site," said Ralph Milliken of Brown University, Providence, Rhode Island. He is a member of Curiosity's science team and was lead author of that 2010 report in Geophysical Research Letters identifying minerals based on observations of lower Mount Sharp by the orbiter's Compact Reconnaissance Imaging Spectrometer for Mars (CRISM). "We're now on a path where the orbital data can help us predict what minerals we'll find and make good choices about where to drill. Analyses like these will help us place rover-scale observations into the broader geologic history of Gale that we see from orbital data."

Much of Curiosity's first year on Mars was spent investigating outcrops in a low area of Gale Crater called "Yellowknife Bay," near the spot where the rover landed. The rover found an ancient lakebed. Rocks there held evidence of wet environmental conditions billions of years ago that offered ingredients and an energy source favorable for microbial life, if Mars ever had microbes. Clay minerals of interest in those rocks at Yellowknife Bay had not been detected from orbit, possibly due to dust coatings that interfere with CRISM's view of them.

The rover spent much of the mission's second year driving from Yellowknife Bay to the base of Mount Sharp. The hematite found in the first sample from the mountain tells about environmental conditions different from the conditions recorded in the rocks of Yellowknife Bay. The rock material interacted with water and atmosphere to become more oxidized.

The sample is only partially oxidized, and preservation of magnetite and olivine indicates a gradient of oxidation levels. That gradient could have provided a chemical energy source for microbes.

The Pahrump HIlls outcrop includes multiple layers uphill from its lowest layer, where the Confidence Hills sample was drilled. The layers vary in texture and may also vary in concentrations of hematite and other minerals. The rover team is now using Curiosity to survey the outcrop and assess possible targets for close inspection and drilling.

The mission may spend weeks to months at Pahrump Hills before proceeding farther up the stack of geological layers forming Mount Sharp. Those higher layers include an erosion-resistant band of rock higher on Mount Sharp with such a strong orbital signature of hematite, it is called "Hematite Ridge." The target drilled at Pahrump Hills is much softer and more deeply eroded than Hematite Ridge.

Another NASA Mars rover, Opportunity, made a key discovery of hematite-rich spherules on a different part of Mars in 2004. That finding was important as evidence of a water-soaked history that produced those mineral concretions. The form of hematite at Pahrump Hills is different and is most important as a clue about oxidation conditions. Plenty of other evidence in Gale Crater has testified to the ancient presence of water.

For more information about Curiosity, visit:

Of course the article neatly sidestepped their first attempt: 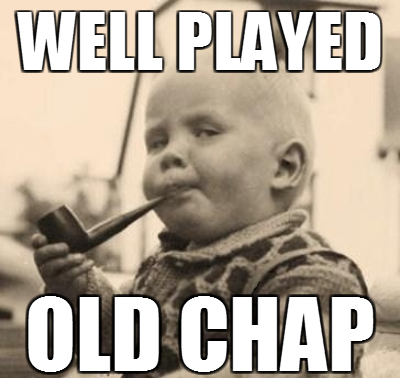 .. go read Joey's threads and entertain him or something ..

.. Now you have a nice evening and such ..
.. (insert ban worthy insult towards tagger here) ..

Blackie ate the dingo.....
You must log in or register to reply here.

It's a do-or-die day for NASA's Mars Curiosity rover

Curiosity Has Made a Discovery "for the History Books" - To Be Revealed Early Dec.
2 3 4