My Two Wheeled Destroyer of Worlds!

After years of expensive repairs to my car I decided to finally declare defeat, and it is way past the time for another means of transportation. Well, what would it be? I don't want to deal with another car for a while. I don't have a motorcycle endorsement, so that's out. Then it dawned on me. I don't need an endorsement for a 50cc scooter. They're all over the place in south Florida. I decided that would be a great starting point for someone who wasn't on two wheels for about 30 years. So I went to a local scooter shop and bought a cheap Chinese scooter. I'm not gonna lie. It rode great. It was very smooth. The automatic transmission shifted very smooth. It went up bridges and overpasses pretty well.. It was a fun scooter to ride. I'm sure it would need more service in a year or two than the scooter was actually worth, but I referred to it as my learn to ride crash scooter. Because it's such a cheap plastic scooter, it's very easy to replace damaged parts. There's also a bunch of mods that can be done to speed it up. Not so much to affect the top speed all that significantly, but get you to that top speed quicker. So I had that scooter for about ten days. Okay, I think it looked kinda ridiculous, but it had the most storage and it happened to be the cheapest one. 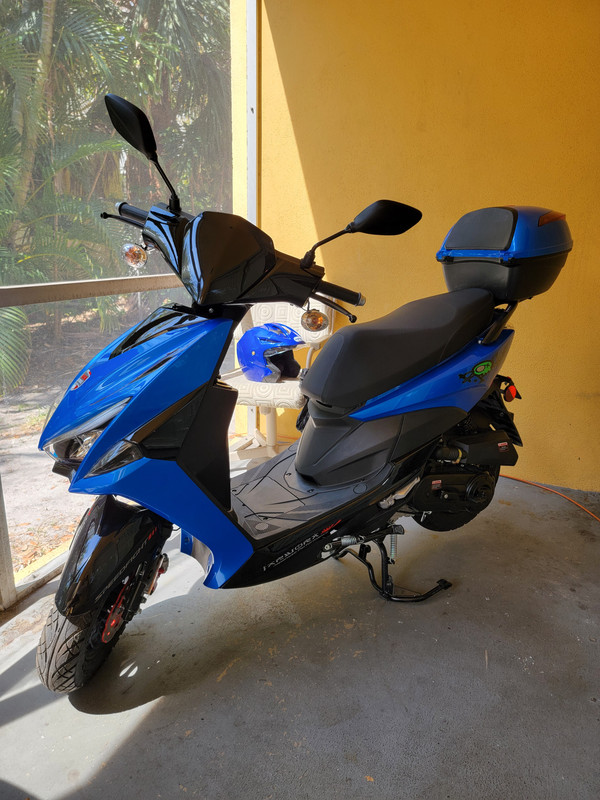 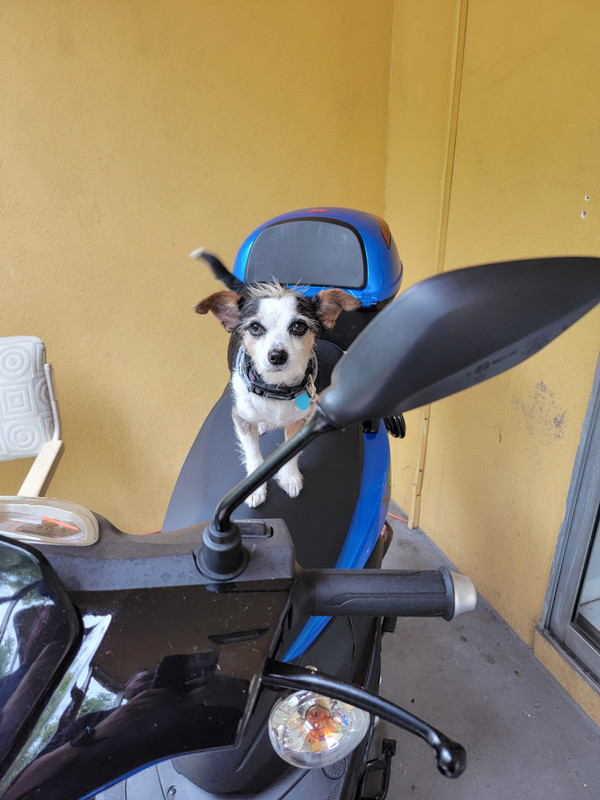 Then the shop got in a used Vespa in just beautiful condition on consignment. It was greatly undervalued. I think they got the price from nadaguides (kinda like the blue book for scooters). They charged a little more than that. Yeah, off by thousands, okay around $1,500.00 depending where it's being sold. As an example states like California and Florida have a great scooter demand because they can be used year round. This isn't so true in the Midwest. I did lose several hundred dollars with using my Chinese scooter as part of the deal. I thought about just buying the vespa and sell the other scooter privately. Then it dawned on me. Who the hell is going to spend more than one or two hundred on a used Chinese scooter, no matter how new it was? I wouldn't. So yes, I lost money on that deal, but they gave me much more money than I would have gotten privately. Also, I had to get the vespa! Did I mention it's 20 years old, with only 345 miles? I took it to another shop, they went up and down it and said it's in amazing condition and with normal maintenance, it was perfectly stored, and it should go for at least another twenty years. I did replace the like new looking, but twenty year old tires. 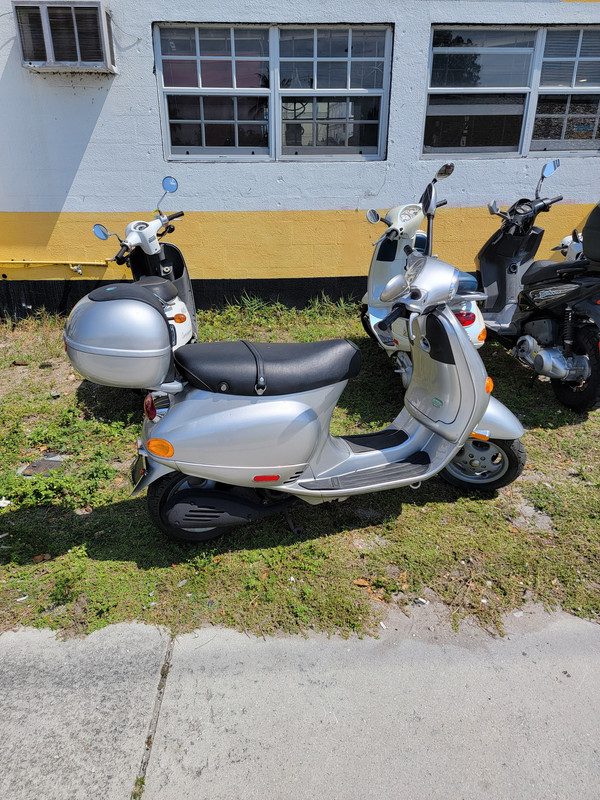 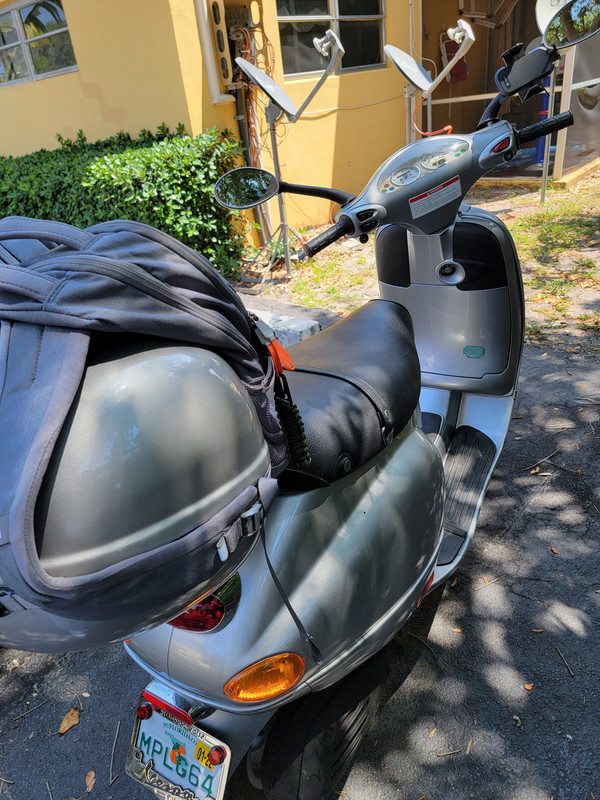 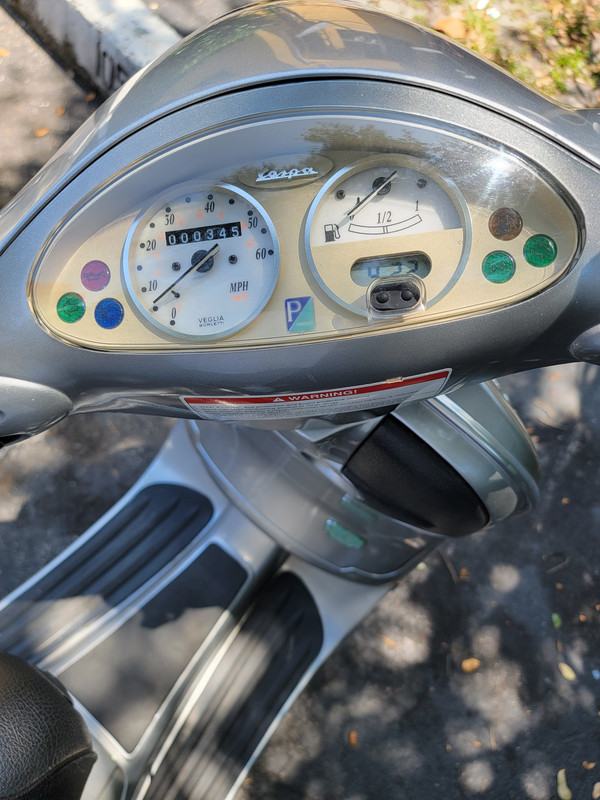 Oh and the cool ass helmet that unfortunately I can't use. 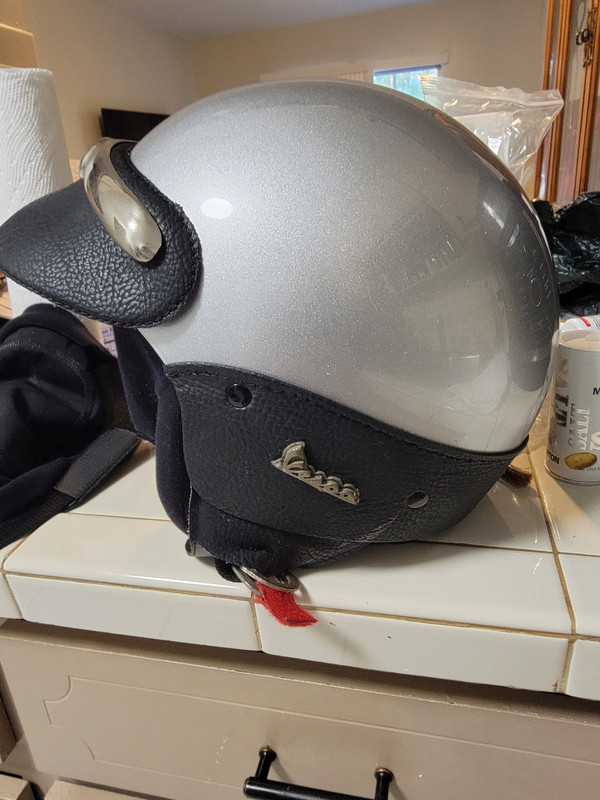 Now on to the best part. I bought an ET2. It's a two stroke scooter. They haven't been made in years. They stopped the model I had 15 years ago. Even better, most people chose to get the 125cc four stroke ET4 so mine is even a bit harder to find. Far from impossible to find, but the pickins are slim. Since then Vespa made only one other two stroke scooter. It was a limited edition 150cc scooter. It was only sold in Mexico. The USA isn't quite into two stroke scooters. Besides being a shitload quicker (same top speed), it's also easier to maintain. Hell, it doesn't even need oil changes.

Anyway, I'm a nerd on a scooter, but it's really a cool scooter to be a nerd on. I'm eventually going to get my motorcycle endorsement, 50 cc is quite small. 42 mph is pretty limiting. I can't see me spending the money on a new Vespa, but I can drop a 125cc or 150cc engine right in, but I'll probably go Japanese with it.

Oh, to make me even nerdier, I just ordered my third different helmet. I want a full face helmet. I found one for $120.00 that is Snell approved. I have cheap riding gloves. Maybe I should reevaluate them. I do wear shorts and sandals though, which is stupid because if I'm going down it will probably be my legs and ankles with the most damage.

Anyway, for those few who read the whole thing, well I guess I'm sorry about that.

I rented a scooter one day at the beach and had a blast. it was a ton of fun to ride. I've liked scooters ever since.

Lately I've been looking at an electric bike that lets you sit and lean back like a cruiser motorcycle instead of hunching over the handlebars.. I like riding bikes I just find most of them very uncomfortable. I don't like hunching forward. I think it looks really fun to ride, and being electric means if I get to a hill and don't want to pedal I just hit the throttle and it takes my lazy leaning-back ass up the hill. Win/Win.

Scooters are really fun though, congrats. i wish they were more accepted in the US like they are in so many other countries.

That thing is awesome. I'm envious.

My wife has a 125cc Genuine Buddy and my daughter has the same scoot with a 170cc EFI engine, which is all the chassis can handle.

I have an ancient 175cc Honda motorcycle that barely keeps up.

Tiny bikes are a blast; two-stroke smoke just adds to the fun.

I want to get this for me and the kids to ride around in the empty parking lot next door..

plus I just think it would be neat owning a tiny functioning motorcycle.

now if I could only find a 3 foot Kamen Rider action figure to prop up next to it in the garage.. My brother had a Lambretta, back in the day.
Crashed it once crossing railroad tracks, and never rode again.

I was into motorcycles for decades, but secretly thought Vespas were engineering marvels.
After WWII, the Italians started making scooters out of aircraft tail wheels and starter motors. The rest is history.

America has such a 'car culture' I think it looks down on anything that isn't a car. Then you get the popularity of SUV's and big trucks.

Motorcycles are awesome but sort of a counter-culture. And you have cruiser style vs crotch-rockets.

then bike (bicycle) culture is its own thing, (and from what I see almost fanatical?)

Scooters are sort of in a weird no mans land. They're a hell of a lot of fun though.

But like Italy, Asian countries, India,.. other countries just seem way more accepting of them as viable vehicles, whereas in the US it almost seems like they're a toy.

I bet living in Cali or Florida though you probably see a lot more of them on the roads. I always see them at the Beach more than anywhere else.
Last edited: May 7, 2021

acstorfer said:
I do wear shorts and sandals though, which is stupid because if I'm going down it will probably be my legs and ankles with the most damage.
Click to expand...

When I was a teenager I got my mother to agree to a scooter if I ever enrolled in College.

By the time I got to college I had a 650cc motorcycle I had ridden cross country.

and here i want to stuff a V8 in a golf cart for my retirement ride.

Imagine how much money we could save if we didn't give a flying fuck what others thought about us?
Last edited: May 7, 2021

I used to ride the ZX9 all day only stopping for fuel and found it very comfortable - as was the ZX10 that replaced it. The Tiger gave me lower backache after about 150 miles. Kamen_Kaiju said:
now if I could only find a 3 foot Kamen Rider action figure to prop up next to it in the garage..

I've seen your Prop-making skills. I'd give it a week, and you'd not only have the Kamin Rider, he'd be motorized to hop on and start it for you.

I try and ride 2 wheels whenever possible. jump on the grom for quick trips. longer rides i have a 2013 sprlortie for commutes and a 96 heritage for longer rides.

Imagine how much money we could save if we didn't give a flying fuck what others thought about us?
Click to expand...

how manly is a golf cart? i just want it to be fast and make a lot of noise.

i drove an AMC Gremlin to high school bro.

Not a Navy SEAL

Even though it's been almost 4 years, I still think about this when I walk into the garage.

What's the old joke about fat girls and scooters? They're both fun to ride but you don't want your friends seeing you do it

It smells like summertime. I use to ride dirt bikes as a kid and that smell just brings me back. It's also reminiscent of a water park I use to go to. Their speedboats always leaked so you really got to breath it all in. The same went for their go cart course.

K.O.M.A. said:
What's the old joke about fat girls and scooters? They're both fun to ride but you don't want your friends seeing you do it
Click to expand...

That's another reason for a full face helmet. It's easier to hide your face.

sonar1 said:
When I was a teenager I got my mother to agree to a scooter if I ever enrolled in College.

By the time I got to college I had a 650cc motorcycle I had ridden cross country.
Click to expand...

And now a 650 is considered small.
The University of Minnesota is overrun with 50cc scooters because here they are legally mopeds and can park anywhere, and you don't need a motorcycle endorsement. Where my daughter is in Oklahoma everything without pedals is a motorcycle, so she got an endorsement and a 170. But since there's no moped exception there's no scooter culture despite a long warm season and relatively flat terrain.
You must log in or register to reply here.

Big Possum +I Do ART!IGGY!SCOOTERS!