My 1952 altered and tortured Goldtop

some pics of the control cavity would be great..

i would clean it up, get it playable then consider a refinish but first get it to play like you want

full blown resto would be nice but honeslty i would save the cost, get to play like a million bucks and maybe down the line work on the apperance....a nice finish would be worth it after you got it to the point you want..

i have looked for 50's lp husks for years and negotiated on 2 and couldnt make it work, then lost a 3rd on an auction.

jimi55lp said:
No serial# were on any 1952 GTs. Can you post a photo of the inside of your rear control cavity from a couple of angles to show where the wires enter and exit? Can you take an accurate measurement of the distance between the neck binding and the screw hole for the pickguards mount, this is different for a 1952 model? Can we see a photo of the side end of the body at the strap button to see the trapeze mounts and ground wire channel? It would also be a very nice candidate for a total restoration?
Click to expand...

here are some pics as many have requested. Still not sure about the all gold theory. I still find it hard to believe anyone well prior to when I bought it in 1966. Would have bothered to strip it and let the top turn to oxidized greenish gold. Make no sense... Why the photos were double/triple posted not sure ....some kind of human error

Since my original tail piece went into the void like my p- 90's, sometime between 1967 and early 70's later I bought this tail piece.

Anyone know the correct distance between p-90's on 1952 with trapeze? Obviously the routed out PU area have altered the distance.

At the moment....I am thinkng of restoring back to original....p-90 s were great. Mine unraveled and broke in top desk drawers after a couple moves in the 70's. If I restore I would have to find legit old parts.

If you had the P-90s, I'd say get the routes plugged & redone to fit them, plug the phase hole, then do it gold (or black, or wine red, or redo your pyschedelic job), and replace any shot hardware - but only as a last resort - with nickel.

As you don't have them, I'll say: Give it a good cleaning, oil the fretboard, fix the binding, maybe a fret dress (not a refret, unless they're really clapped out; I like those old-sized frets), and ship it to my house.....

I could restore this, buy a new Les Paul -the new good one - strip it and paint that one psychedelic.

Honestly though I don't think any Les Paul sounds as unique and special as mine...hard choices.

Quote: Still not sure about the all gold theory. I still find it hard to believe anyone well prior to when I bought it in 1966. Would have bothered to strip it and let the top turn to oxidized greenish gold. Make no sense...

I think it was really common back in the day. Lots of guys liked the Gold Top, but not an all gold.
J

If it were all gold original, it would not be hard to imagine the back finish being horribl in 1966. I don't believe this would be the first to have its back stripped and refinished in natural after 14 years of use/abuse? All gold never held up well!

The appearance of the top when I bought it, was gold with almost a copper green hue and very broken up color.

Gold backs turned ugly quickly. I mean I personally like that, but others probably not so much. It's possible the top layer of gold was scraped off to reveal the usual brown back as they usually have quite a thick clear coat as a base over filler. But you're looks like a later refinish, probably because the owner didn't like the way the gold back was aging. 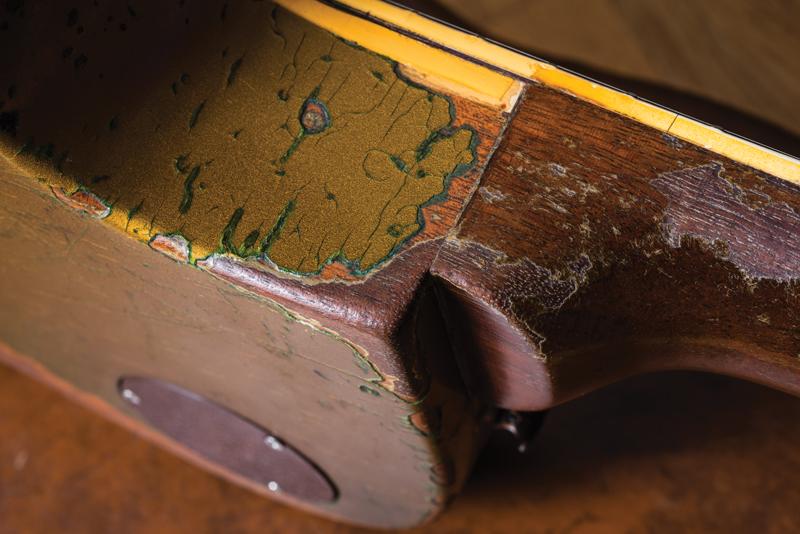 I also wouldn't like bare wood. It would have to be sealed with something just to prevent damage.

When I painted it with the Fantasia, Goddess Diana scene, I Used Oil Paint and after the paint was dry, after a few months, I covered it with urethane. All the hardware was the gold, later I removed the gold pickup covers as it seemed to effect the sound. The oil Paint and Urethane, strangely seemed to improve the sound. rialcnis said:
When I painted it with the Fantasia, Goddess Diana scene, I Used Oil Paint and after the paint was dry, after a few months, I covered it with urethane. All the hardware was the gold, later I removed the gold pickup covers as it seemed to effect the sound. The oil Paint and Urethane, strangely seemed to improve the sound.
Click to expand...

what if I do something strange...like this

Move my bridge pickup up to middle....add old esquire Bridge and Nocaster '51 pickup and controls?

perhaps have the edges contoured like the Jeff Beck Esquire. i would personally get that bad boy in playing condition amd leave the rest alone. talk about some 'jo! awesome piece of history.

Move my bridge pickup up to middle....add old esquire Bridge and Nocaster '51 pickup and controls?

perhaps have the edges contoured like the Jeff Beck Esquire.

Seriously, I love LPs & I love Teles. I also love blizzards & motorcycles; doesn't mean I'd want them together.........

maybe I'm running a fever No I am just going to have it restored, complete withp-90s, trapeze and existing stock weird neck angle. but...I'm conflicted

......well another idea is take my French Jeanne D'Arc altar panel with veryvery old wood. and have a
True Relic turned into a Jeff Beck nocaster

no that was enough Photoshop for one night

anyone know who the head Luthier at Wallach's Music City was in 1967-68? Sunset and Vine. Hollywood?

EDIT: Did some searching and discovered the Luthier was Milt Owens.!
Last edited: Jun 26, 2019

TLDR; I’d be willing to spend a good sum of money having Renson’s turn my guitar into a perfect player and cosmetically beautiful again and then I redo my psychedelic top myself.


Much good advice has been offered me on this thread. Admittedly I have been conflicted about what to do with my guitar. Much appreciated. This forum is terrific.


Yesterday, I made a brief appearance at Renson repair shop in Studio City, my first visit to a Luthier in 29 years. since I had new tuners put on in 1980. He exudes guitar knowledge without saying much and a hint of cynical humor. He was obviously very busy and I was interrupting the work he was doing, with my conflicted attachment to the guitar. Just being there made me want to have him fix everything that needs to be done to make my guitar as it is, the very best player guitar and forget about my 1952 Gold Top restoration idea. (After all, the ’52 LP Bridge was very unstable.)

He warned me about "sharks" selling fake parts and that a restoration would be very expensive. He made it clear he doesn’t do major refinishing jobs anymore, because of the health dangers. of the nitrocellulose etc. (Glancing at the neck he said the frets look to be original.)

He asked me what I wanted to do with it and when I told him the possible restoration idea, he asked me if I was out to sell it then. I told him " yes." but not in a hurry to do so but I am very conflicted about it. I explained that I am caregiver to my 96 yr old mom and was finally working on my old music projects.

After thinking about what he said it surfaces in my mind that my real concern is what I would be leaving my daughters as an inheritance, guitar easy for them to sell for top dollar, or, something funky only a parent could love?

Would my precious guitar end up in a landfill because it is just an old, ugly guitar? Now, of course these material objects all end up in the landfill, sooner or later.

I'm a young 72yrs old who feels like 20yrs old and has the same creative urges, My LesPaul, my Synthesizer,, my Shakuhachi, my harmonicas and tupperware boxes full of outrageous tapes of song lyrics and film scripts I did in the 60’s and again in the early '80,while involved in other, unrelated occupations, working in psych wards with degrees in Psychology, Eastern philosophy and laser physics, after abandoning my 18 yr old rock star aspirations after seeing the Yardbirds in ’65, ’66, ’67 and ’68. (Renson, wryly joked, “Jeff Beck was a hack”….I HOPE he was joking? Maybe only Narcisco Yepes meets his high standards.: )


I’d be willing to spend a good sum of money having Renson’s turn my guitar into a perfect player and cosmetically beautiful again and then redo my psychedelic top myself.
Last edited: Jun 27, 2019

Using my Painter software, I am in the process of resurrecting my original, psychedelic top I did 52 years ago.