What's in a name?

I play one of these:

I love amps second to guitars. Here is what I have now Blackstar HT40 combo with extension cab, Marshall AVT50H with a 2x12 cab I just put together for it and last the Krank Nineteen80 20w amp. I am trading the Nineteen80 for a STiFF Dirthead 50w tomorrow. I just sold a Blackstar HT5 stack the other day. I think these smaller amps do just fine and enjoy them just as much. 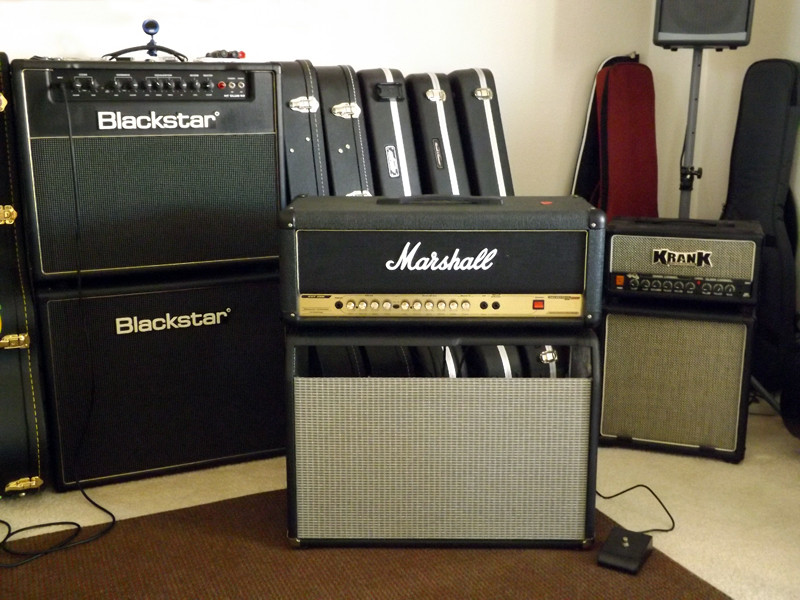 Love those lunchbox amps! Here are a few of mine: The coolest thing about these Marshall 1W amps is that you can plug them straight into a 100W slave amp (like my BadCat Unleash) and convert them from bedroom to stage....

Quill said:
I think the Tremor is

Lord that was a bad mofo tonight.

4 other bands played and some sounded good, and I admit I'm biased. But the Soul Tramp kicked ass.

We got the best crowd response and I had people coming up all night buying drinks and saying how good it sounded.

I know Don keeps hinting to me that he thinks I'll like the Wraith or Serenity more since they're multi-channel with more gain, but at the moment I just can't imagine liking an amp more then I do the Tremor.

The biggest reason I only used a couple tube amps was because I always found them a little 'flubby' in the bottom end. For shredding, thrash/death playing, low end riffing,...you really need that super tight low end that Solid State (and Boss pedals) provided.

But the Tremor seems to have no problem keeping a tight defined low end. How much is the Tremor and how much is the MHD pickups I honest don't know. But I know my little Epiphone sounds amazing now.

And I know the Tremor (and Don) got me liking, loving and appreciating tube amps.

I just got a Bogner 2x12 tube amp about a year or maybe a little more ago, and it sounded ok. But it was an open cab so it didn't have enough bass for me personally, and after 5 months it just took a sh*t on me.

So 26 years playing. 2 tube amps, a Bogner and a Marshall, and a sh*t-ton of Solid States and pedals...and now the ST has me gushing over tubes for the first time ever.

I guess the best word to describe it would be "Inspiring,".. and I think at the end of the day that's exactly what we want in our amps/sound.

feels like living in a house for 20 years then someone shows up and points out a room in the hallway you never knew was there.

In preparing for tonights gig I broke out all my pedals and was going to make a custom board. A couple observations of the Tremor:

The Ibanez Tube screamer sounds really sweet. It gives it just enough push in solos to really boost the sustain and scream a little bit. Oddly even with the level maxed it didn't really 'boost' the sounds as much as just cut out the low end and boost the mids. This helped the solos cut through, but I really wished I'd had a clean boost, either 5 or 10db, to really punch through.

The Bad Monkey which is a pedal I've always liked and works well with the Vox Pathfinder (very well actually) sounds a bit muted and lacks treble when going through the front end.

A straight up Distortion pedal like a Boss Metal (or whatever, they've got multiple "metal" pedals) does really weird stuff and doesn't sound good at all. I don't know if it overloads the circuit, but it squelches and just sounds bad. A lot of fine tuning may fix this, I admit I didn't spend a lot of time with the distortion pedals. (the amp overdrives beautifully and I can go clean/overdrive by using my guitar volume knob. So I just really don't use "distortion" pedals anymore. ....the Tremor agrees not to use them. Haha. )

The Rat Pro Co? (I think that's what it's called, it's a 70's style hand-wired pedal that was made for me) sounds really good. It's almost like a 'Super Tube Screamer.' That's really the best I can describe it, a Tube Screamer cranked up to 11,...and then some.

Other pedals, tremolo and such worked fine.

I found the Tube Screamer, The Rat, and the Boss Tuner really made for the best board for me. I can control so many sounds of the amp just with the guitar and pick attack, that the pedals are really there for those times I need a boost.

Instead of fighting my amp, now it's pulling stuff from me.

(sorry for the long windedness, but it was a fun night. I still only got to open up the Tremor about a 3rd of the way. )

Sinster said:
I love my Tubemeister 18 which also does 1w and 5w as well.
Click to expand...

Me too. I also wanted seperate gain and masters for both channels (which the TM 5 doesn't have)
If my budget would have allowed me, I would have gone for the TM 36 though (but that is another story).


Not having seperate gain and masters changes the sound and volume far too much to make it work.
It's like having 2 single channel amps in one box

High gain setting on the clean channel will give you AC/DC, but if you switch to lead with the same setting, the difference is just too much.
With the TM18 I can switch from AC/DC to something more crunchy without fiddling.


I also have a Class 5, the "base sound" is cool, but lacks in versatility

Malikon, have you thought about using an EQ pedal for a boost?

My 7w Cygnus is a loud SOB. It's bigger than a lunch box though.. , but that's alright it's still CRAAAAAANKS!!!

EDIT: Fixed my misspelling/incorrect word that Cygnus pointed out

Sinster said:
My 7w Cygnus is a loud SOB. It's bigger than a lunch box though.. , but that's alright it's still CRAAAAAANKS!!!
Click to expand...

Cygnus X1 said:
Malikon, have you thought about using an EQ pedal for a boost?
Click to expand...

I don't care for them (for some completely illogical reason.)

Growing up I'd see them stashed behind amps and I (childishly) thought of it as 'cheating',...and it kinda stuck. (they were primarily used to completely scoop the mids,...from what I remember at the time.)
I

Eh, EQ's are just another tool in the toolbox.. Use em' right and they can get you where you want to be.

As for lunchbox amps, what the Class 5 lacks in versatility it makes up for in tone. I've had mine for over a year now and it sounds better every time I turn it on.

i am not that great of a player
but was lucky enough to pick up a good amp last year,
for the first time.
a mini rectifier.

that thing is an instrument in its own right.
makes the guitars sound great.
and amplifies ALL of my mistakes,
the skills are slowly sharpened.

Iron Broadsword said:
Eh, EQ's are just another tool in the toolbox.. Use em' right and they can get you where you want to be.

As for lunchbox amps, what the Class 5 lacks in versatility it makes up for in tone. I've had mine for over a year now and it sounds better every time I turn it on.
Click to expand...

It needs to go past 12" or it'll be dark, after that it opens up. I use my head with the headphones trick and a pedal for leads. Sounds great and looks great as well.

On the whole lunchbox amps, I really like their format. You can get make a bigger collection hehe. Only one I haven't gelled with is the Vox Night Train... too harsh.

i love small tube amps!!!
here is my little evil tube togo amp.
it is ugly as a hell but it's nasty

I've been rocking a JCM800 combo for 15 yrs, and recently build a 5 watt tweed princeton. It has totally transformed how I play guitar. I can dig for notes when I feel it, and whereas the 800 would have blown out the back wall with all that headroom, the little guy just kinda compresses a bit and sends it out with no volume spike.
Power tube running at the max! Usable volume!
Life changing.
And, I plug it into the Marshall's speakers 2x12 WGS Vet 30's, and it's plenty loud enough for a band.

Malikon said:
I think part of it was the Headbanger/Metal mentality that you have to have a 4x12 with a 100w amp.
So 20w of tube amp is actually pretty loud. Louder then I ever gave it credit for.
Click to expand...

Isn't that just louder and more distorted? Maybe OK at home.
I use my 100w Twin amp for total versatility (all be it a 2x12) and never played headbanger music or metal.

oh, Overdrive is not Distortion.

The Overdriven amps are a completely different beast.

It almost reminds me of playing a Tele sometimes because there is no place to hide.

randelli said:
What do they say? You can't fake it on a Fender....
Click to expand...

Try it with an 800....
The old amps were definitely truthspeakers.

You forgot about the ZT Lunchbox! Good sound and crazy lound. A great little practice or gig amp!

Oops, you said tube amps. My bad. ;( But the ZT still rocks!
You must log in or register to reply here.

Which one to buy??