efstop said:
The DSL1CR has a Celestion Eight 15.
Click to expand...

Never heard of it!

scozz said:
Never heard of it!

"The Celestion Eight 15 8" guitar speaker gives you classic British tone with a warm body and distinctive growl. The 15W Eight 15 has a ceramic magnet that gives you an edgier tone at higher levels. ... " from a Sweetwater ad.

scozz said:
Nice CSB!! I’m curious, just how many amps do you have currently? Like a couple dozen?

I just counted today: 10
Am GASsing for Carol-Ann HS2 and possibly, possibly another Carr Raleigh, Marshall Class 5, and Marshall AVT20

scozz said:
I’m also curious @cherrysunburst00, how that 8” speaker sounds? Oh yeah, and what speaker comes in that little beast?
Click to expand...

My Homie @efstop answered the DSL1c speaker question. As for tone, I like it; it's great for early am practice.

DHart said:
Tried the VOX AC4 and just wasn't thrilled with it. Dirty tone was just kind of muddy. Cleans were just 'ok'. Returned it and stepped up to the AC10 and MUCH happier with this amp, for not much more money. Great VOX tone.
Click to expand...

I had the AC4 head,...played it thru a 1-12 Blackheart cab loaded with, (at the time), an Eminence speaker. I didn’t have it very long, it sounded very thin and weak.

When pushed, in the 4 watt mode, the overdrive sounded ok. Not at all what I wanted though, or expected. 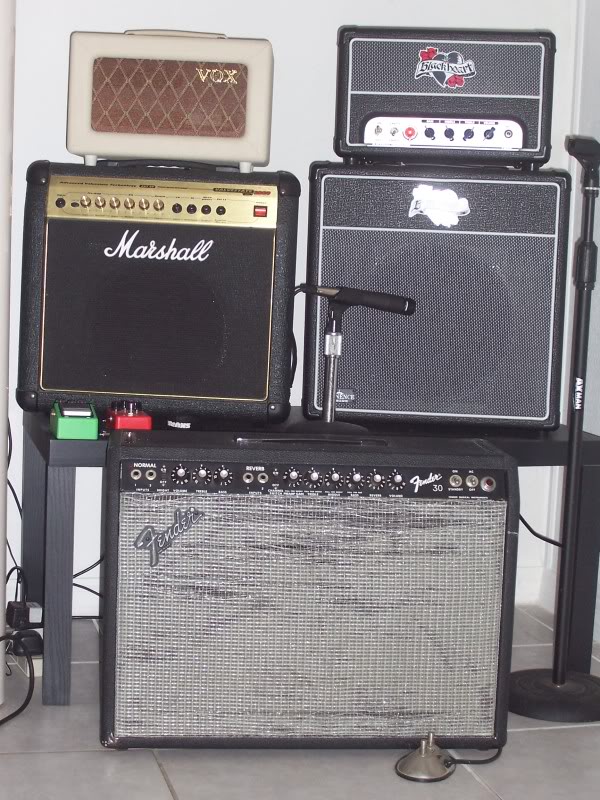 Ordered one of these last week, hopefully get it before end of August

Anyone got or tried one?
G

Not sure if it's come up in the last 33 pages and I probably don't have enough experience to make recommendations but I really like the Laney Cub 12R. Full valve, amazing sound and it'll happily do really quiet.

Would upload a pic, but apparently it's too big..

I don’t have a lot left but I kept my 72 Vibro Champ and GA5. Really dig the old Vibro Champ. Lots a great quality new and vintage amps to choose from ...

Have a buddy of mine who constantly scours about 2-4 GCs around his area for super cheap $20-$30 amps like these. He must have about a 100 of them, he's always buying them.

He'll buy em, take em home, play em, catalog them(takes pics and writes all the info down: name, model, series #, etc. "Feel", if he liked them or not). He says he spends no more than $20-$30 on them($30 being his limit). He says he usually can negotiate w/ GC on one's marked over $30(these are $35-$40 amps he says). But he stays firm @$30 if they refuse. It's hilarious watching him trying to negotiate & having a meltdown if they refuse. He doesn't have meltdowns very often any more, but it's still hilarious going with him. He'd be a good car salesman. He negotiates EVERYTHING. Last time I went with him, GC refused to sell him this $40 amp for $30 & the entire way home, he complained about it(in his defense, he'd spent close to $200 on like 6 amps that day). But that one they wouldnt budge on on price, he was LIVID about it. He's a good guy & takes ribbing pretty well. He likes it when i tell him to calm down. I just tell him to wait it out & eventually they'll lower the price to just move it. Then he's okay. But the initial 20-30 minute rants about how so & so @ GC was an "ahole", are hysterical. He swears more in that time frame, than he does period. F bombs and a holes and so and so is just being a f d head.... You'd all laugh hysterically.

He'll play each one he says for about 4-5 hours & decides whether it's a keeper or not.

Guitarists like myself have wised up over the years and no longer have that more the better mentality. Manufacturers have responded with high quality low watt amps.

I use 25w solidstate and 15w tube amps live and at home. Plenty of volume even with drummers.

The saying it's more fun to drive a slow car fast than a fast car slow applies to amps.