Let's See Your First LP; Details, and Do You Still Have It?

1992 Gibson Les Paul Standard Wine Red with the skinny 60’s neck . It’s completely stock except for the Grover Tuners I swapped out in 1994. The guitar was an engagement gift from my soon to be wife. Still have the LP and still have the wife. Only complaint now that I’m 52 is the weight. After an hour or 2 it does get heavy. Picked up the Gibson 61 reissue SG for the light weight. It too sounds awesome. Only complaint with the SG is the wide nut. My small hands ache after extended playing. My first LP was bought new in 1988. It ends up being a rare beast in this color. I can't even count the amount of crap I have taken over the years from other Gibson players over this guitar, but I really could not care. It still looks and sounds great, and I have a guitar that very few people have, or can ever have. 1988 Les Paul Studio Lite, Nuclear Yellow with Black Hardware. photogazer said:
My first LP was bought new in 1988. It ends up being a rare beast in this color. I can't even count the amount of crap I have taken over the years from other Gibson players over this guitar, but I really could not care. It still looks and sounds great, and I have a guitar that very few people have, or can ever have. 1988 Les Paul Studio Lite, Nuclear Yellow with Black Hardware.View attachment 312778
Click to expand...

I ain’t fixing to give y’all any crap,brother. That’s a very unique LP to say the least.....

My first was a Tanglewood TSB58 Honeyburst (great guitar!). I put a SD59 with Alnico 2 on neck and a SD Custom on bridge. After, I put a Gibson Tim Shaw on bridge and a 490R on neck. I feel your pain - I had a Marshall amp that I sold 10 years ago and to this day I regret it.

KillingTone said:
Thanks for that link. I posted some different picks over on that BB thread so jump over there and take a look!
Click to expand... 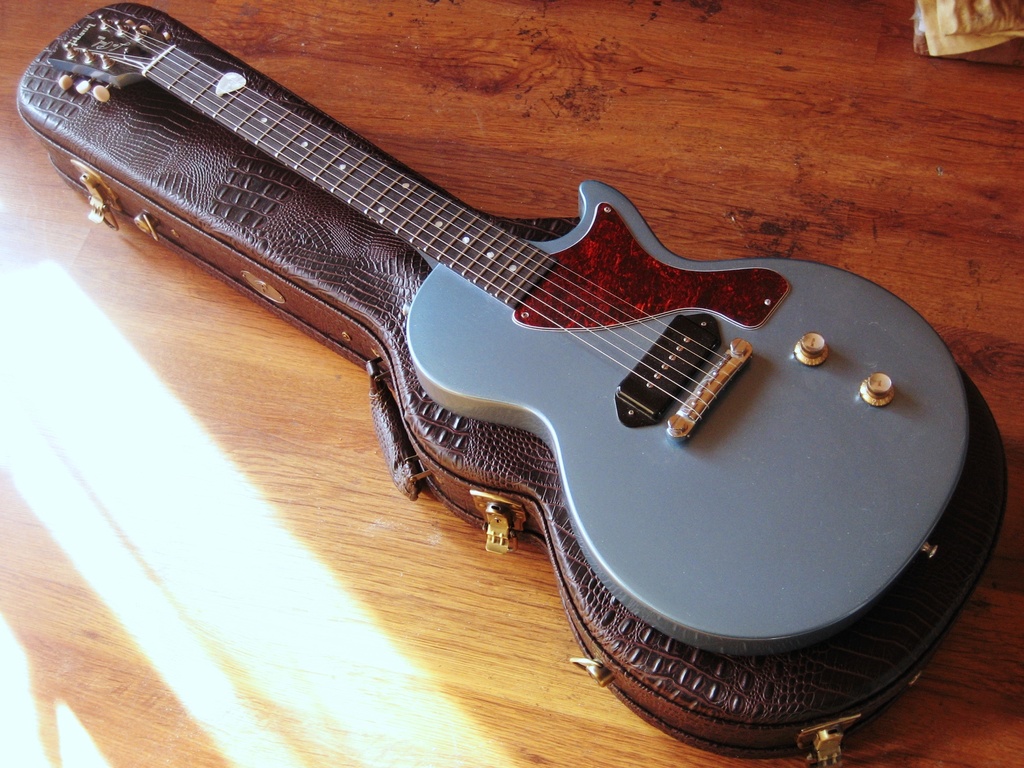 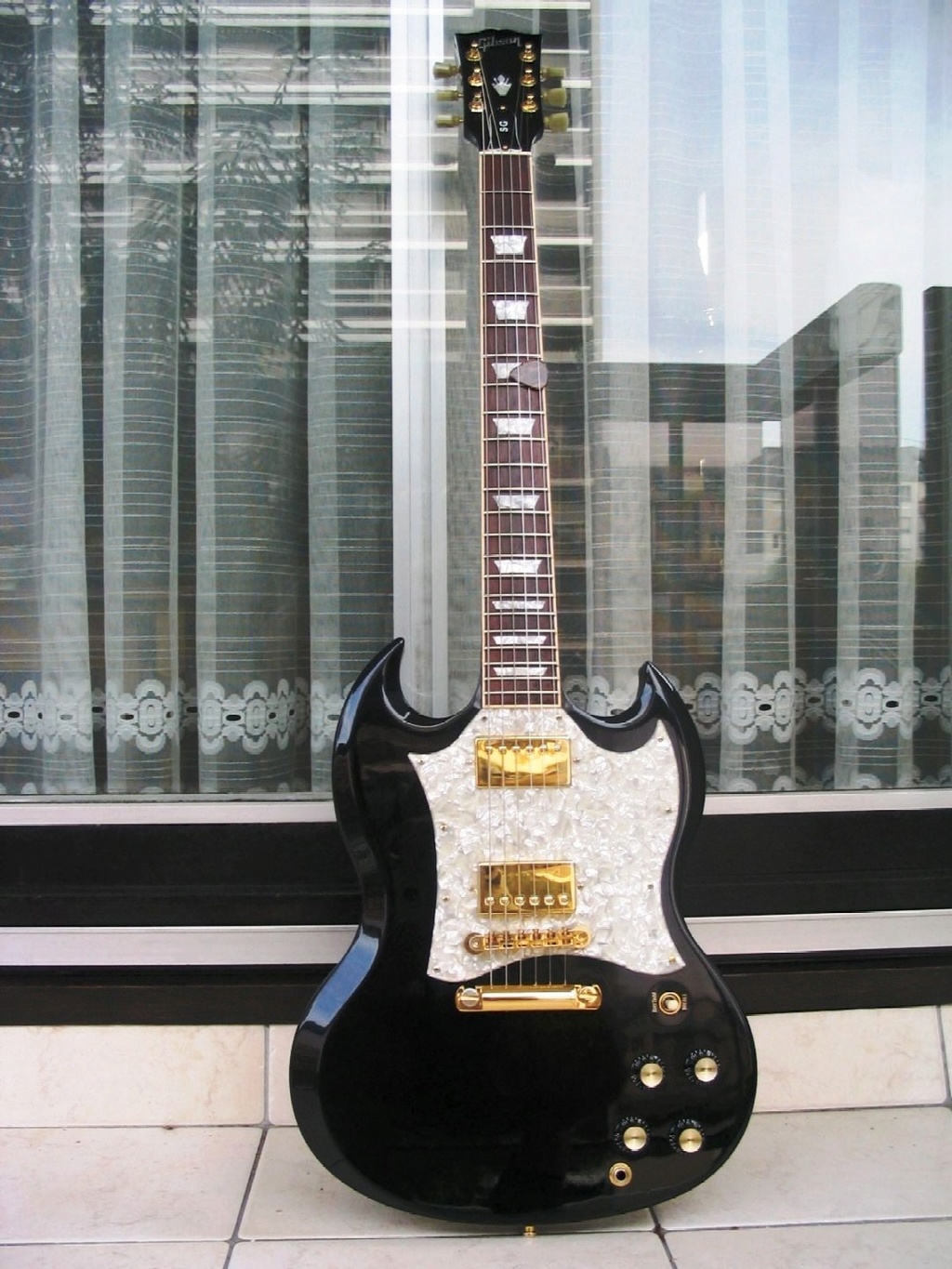 My first LP is this 1995 Premium Plus Standard, which I bought new. I still have it along with a 1995 LP special double cutaway, and a 1995 '61 reissue LP SG style guitar I got my first Les Paul from Uptown music at their first location in Seattle Washington back in about 76. I had no idea what I wanted or which color I should get so I just asked to bring me guitars and close my eyes and strum to my wait for one to just sound and feel better to me after I chose one that seem to just vibrate more and seemed more resonant. I open my eyes and I have a wine red Les Paul Standard in my hand honestly aesthetically it would have been the last guitar I would have chosen but it was a great guitar and I played it for 2 or 3 years and finally traded it for something else I wish I still had it. But I traded it in I traded it in enough time music and unbeknownst to me the owner Chet Sydney and kindly kept it and hung onto it in case I change my mind if I'd only known I would have got back for it but I figured it was long gone and I only found out about 6 years later that it hold on to it it was a great guitar. I'll always wish I kept it I do still have the second Les Paul that I bought from them it was a model but I bought it in 79 or 80 new off-the-shelf or the store was closing and it was called a Les Paul Pro it's got like a skinny 60s neck and Ebony fretboard black with 2 p-90 pickups of one of the finish off the neck and off part of the front it's been my main guitar playing Blues For the last 10 or 12 years at least until I got my R9 Les Paul I learned my lesson I don't sell guitarist I just buy him and keep them.

I still own it, I mount some aph2 in it. It's currently tuned in C#, sounds amazing. 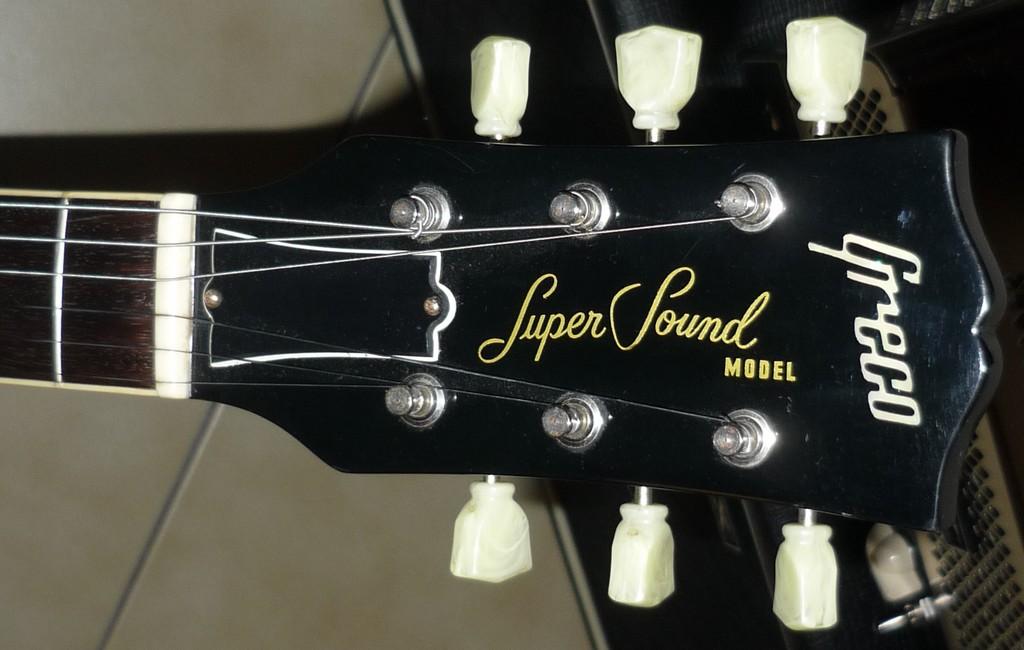 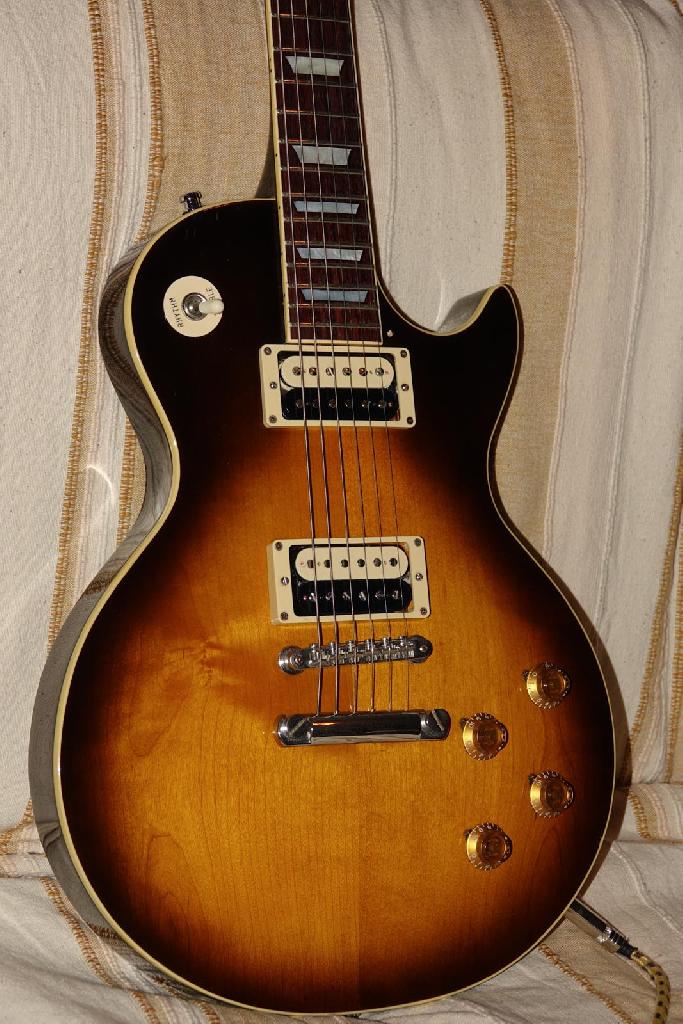 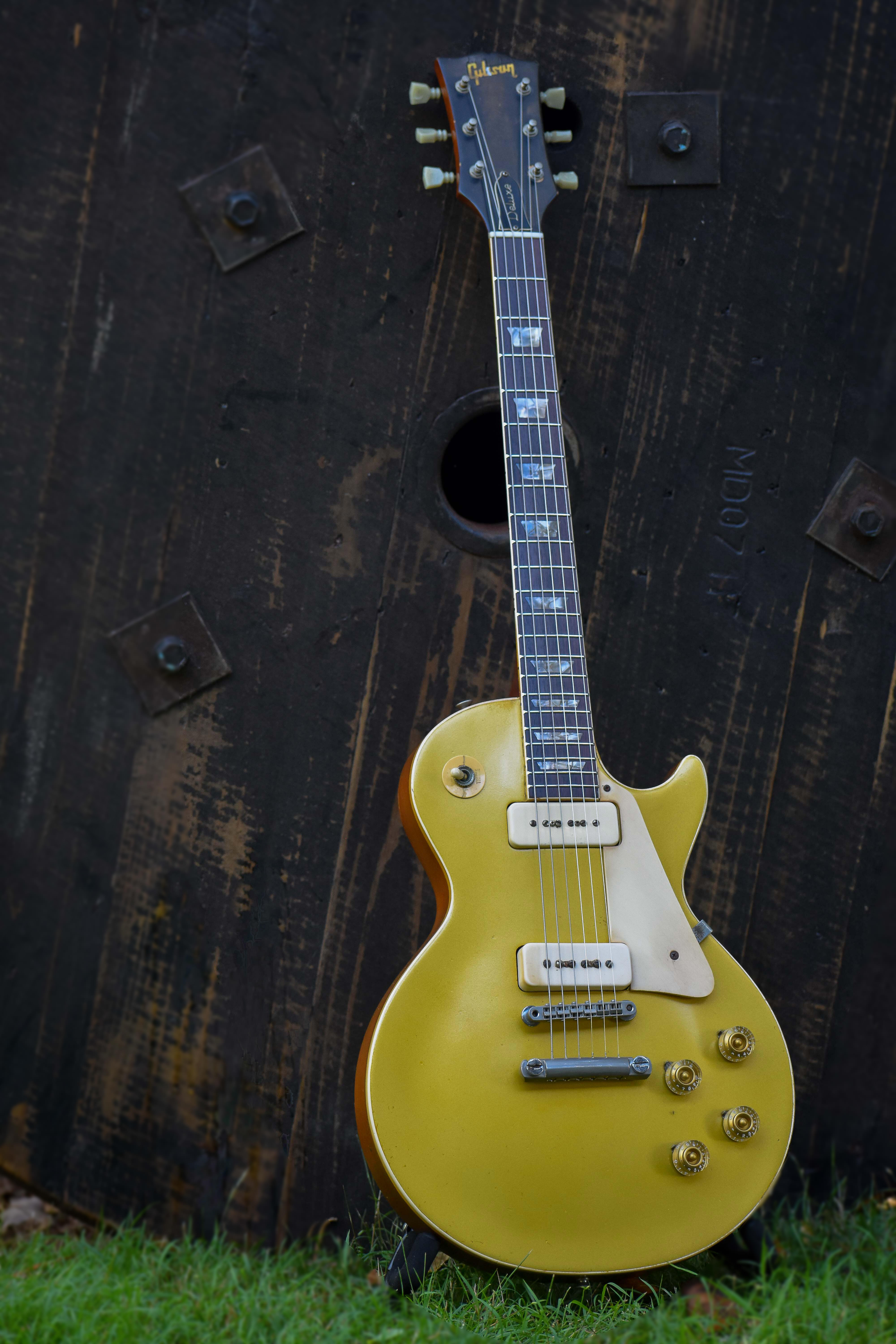 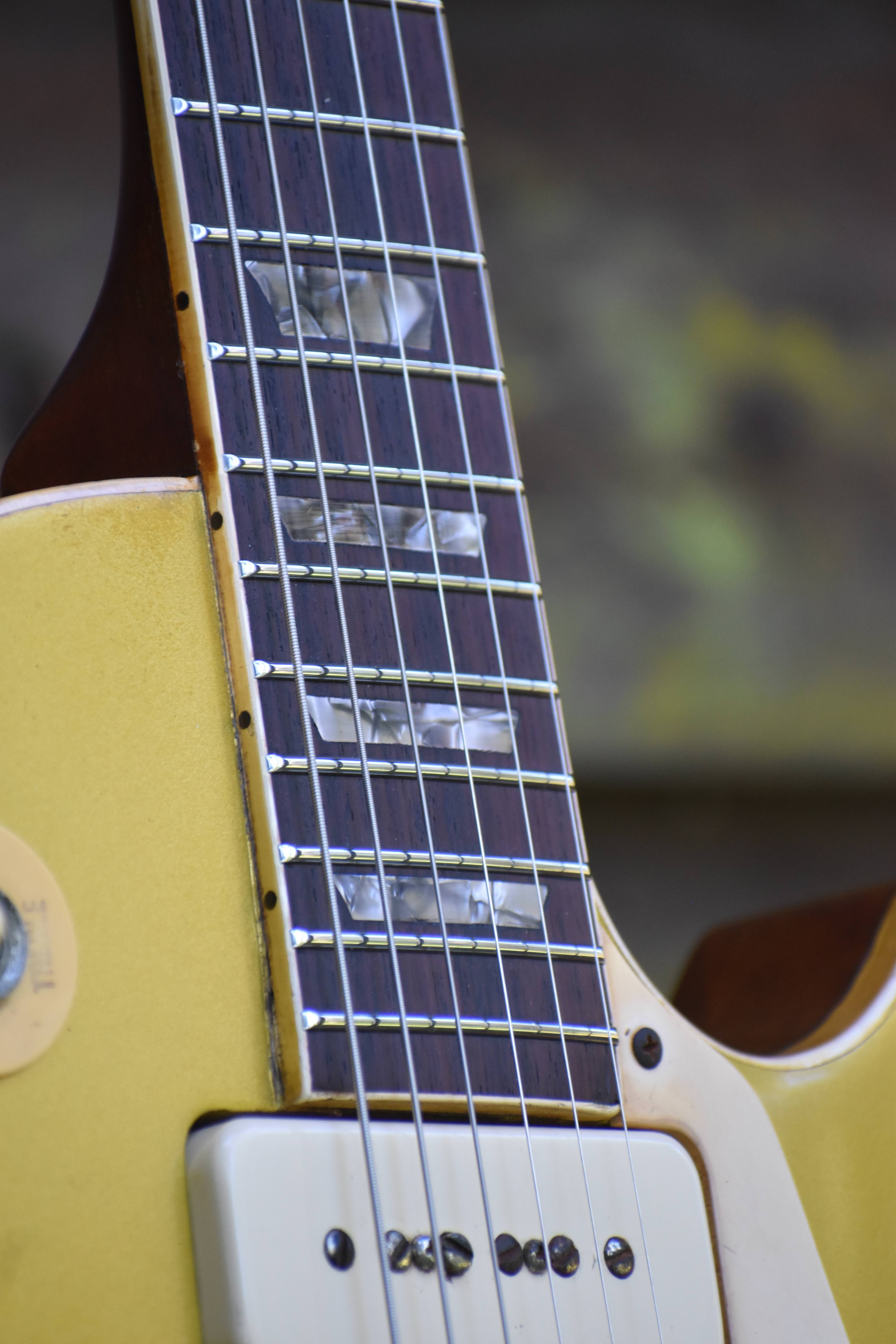 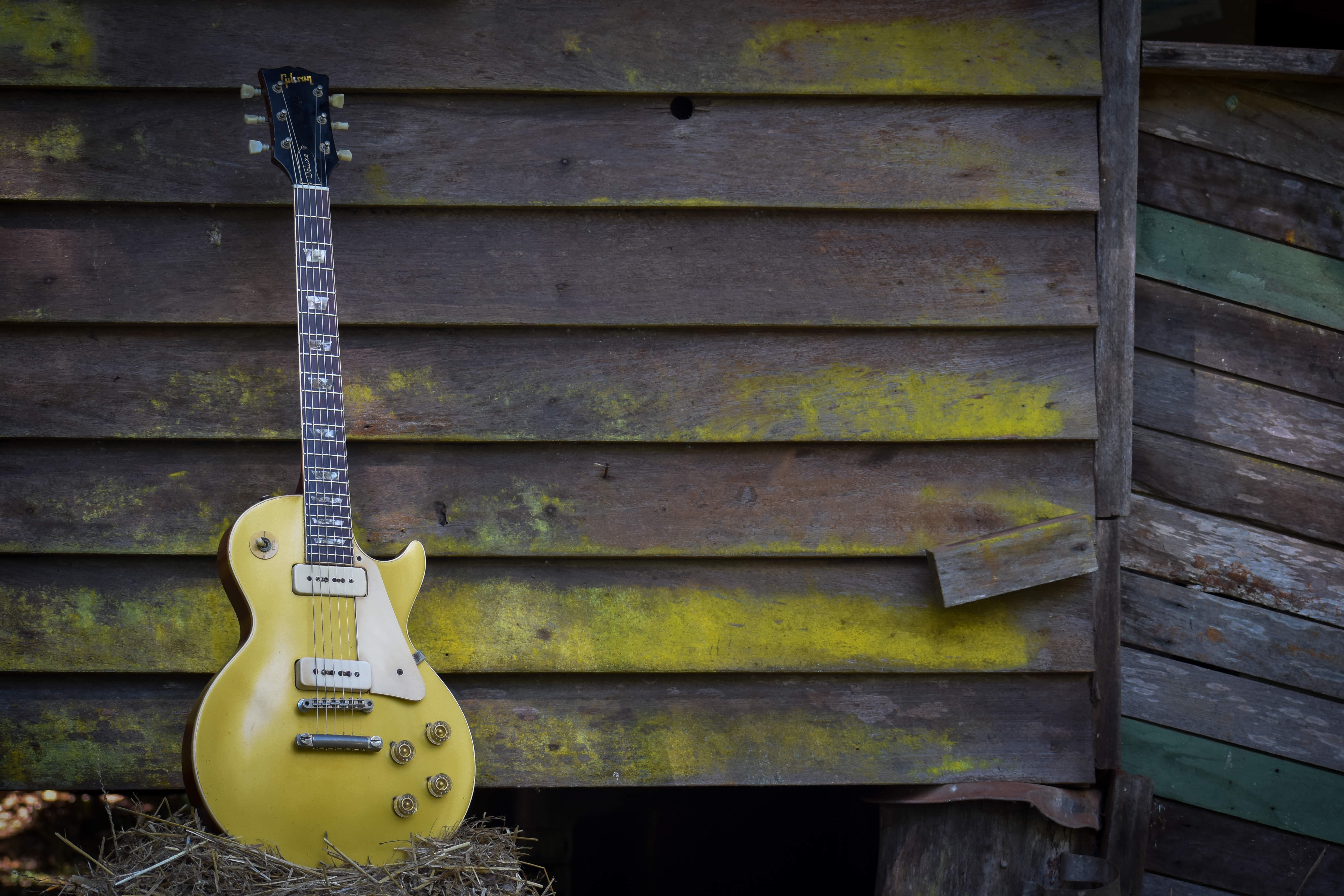 Here are some piccies of my first ever Les Paul. I've only owned this guitar about six months. I bought it from a work mate from my time in a pro guitar shop. The friend had owned it since 1985 and gigged it professionally for many years. It tried it years ago when he brought it to work and it blew me away. It was, and still is, the best sounding LP I've ever played. Anyhow, he sold it to me recently as an all original 1969 LP Deluxe. In my research I found that it was 'unusual' to find a Deluxe with P90s. He assured me that it was original. It played very badly by now and needed a refret and the inlays were cupping up so badly they hit the strings. My luthier 'red flagged' the guitar and said he thought it was a refin. I almost 'soiled' myself because I'd paid an ORIGINAL price. He discovered overspray in the pup cavities. Also, the pickups have what looks like a date of 1979 in ink-stamp on the back. By now I'm almost weeping. I challenged the friend who said he didn't believe me so I took it to two other independent luthiers who confirmed the verdict. In fact, there were a couple of other issues as well. The friend was genuinely totally shocked! He'd bought it 'as is' back in 1985. He agreed to refund me half the price I had originally I paid him. I went ahead and had it refretted with SS and had the inlays reglued. Fretboard was also reshaped. The luthier says it's very fine sounding LP and has one of the best pieces of rosewood he's ever seen. Anyhow, it's still a killer guitar and now it plays like butter. I have it strung with 11-49 like all my other guitars. Sorry for the long story. 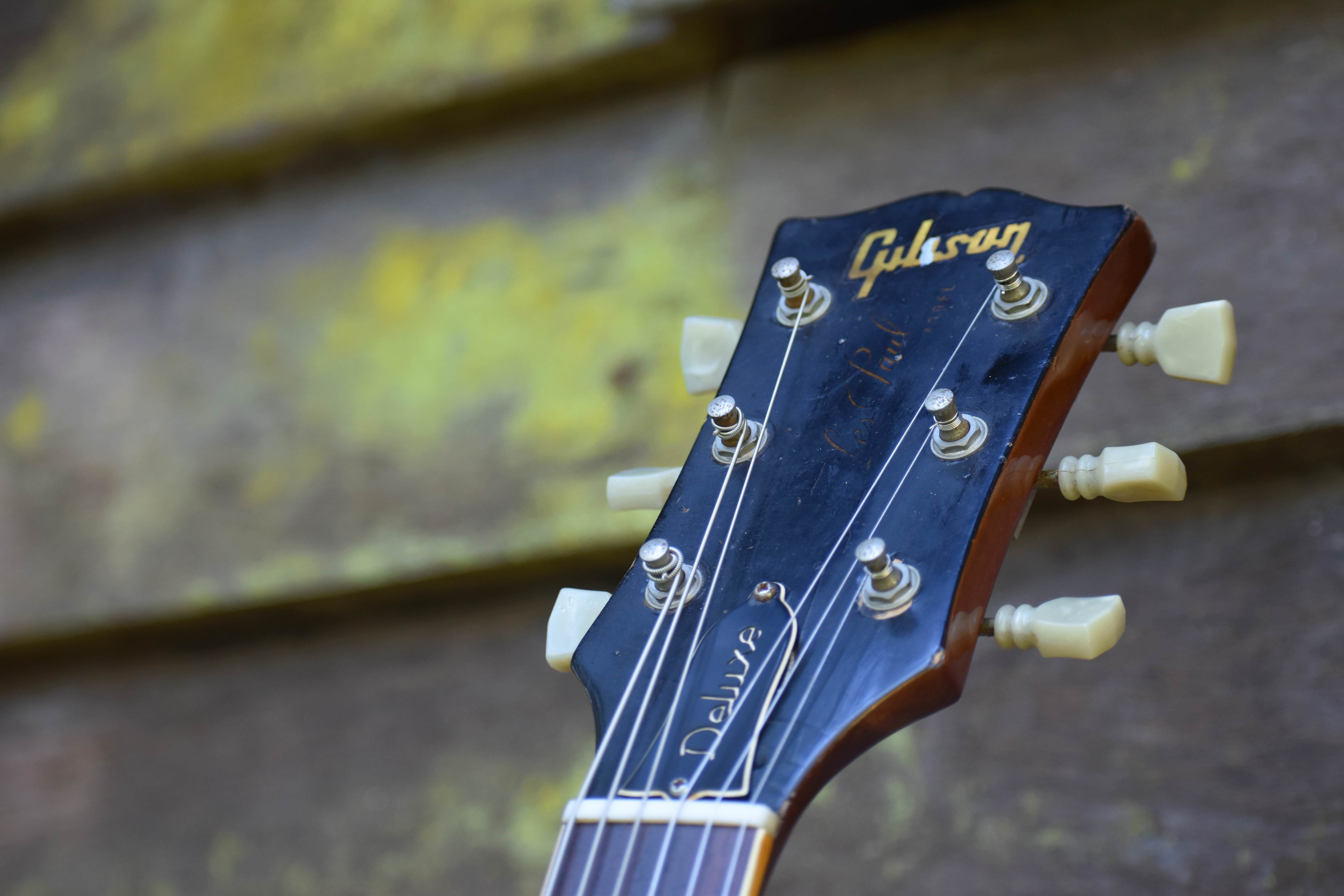 I wish I still had it. A 1982 Gibson les paul standard in cherry burst. I had a polaroid picture of it at some point but that went missing.

I’m a bit late to the party in this thread — but then that seems appropriate as I was very late to get into Lesters too!

I’d been a Strat player pretty much forever, with the same two workhorse electrics for about 25 years (MIJ, ST54 + ST62, both great guitars).

Sure, I’d been perfectly aware of LPs (and other Gibsons...!) for all that time and very much appreciated their sound, those who played them and the recordings made with them, including some of my favourite musicians — but they’d just never appealed to me as a player. (That and the fact that I could never have afforded one...)

Fast forward from the early ‘90s to about 2013 or so and I stumbled across Joe Bonamassa. In truth, I’d never heard of him before then but I was impressed with what I’d found. A couple of years and a few live gigs later and I finally thought, OK, yep, I get it — I need a Lester. Now, I know JB evokes mixed feelings around here and I do get that but for me he was the key that finally unlocked the Les Paul.

I’d seen some blinding high-end models on line that I absolutely loved the look of but they were waaaay to pricey, so I started out looking at the more realistic end of the spectrum (the faded and tribute models). This, however, was around the end of 2015 so there were lots of blow-out sales on unsold 2015 models by the big dealers (and some nice deals on the later Sprint Run models) but it was a bit of a maelstrom time in terms of reviews, dislikes and confusing specs to say the least and I admit I struggled a bit to make head or tail of the whole thing.

Anyway, bit by bit, I whittled it down to a a few options and was largely looking at the new early 2016 models. Tribute Honey Burst looked likely but I wasn’t sold on the very dark backs.

I moved up a notch past the Studios and found the Honey Burst Traditional T, but a proper aniline red back and neck really appealed but I also knew full-on Cherry Sunburst wasn’t for me.

Hence I ended up with a brand new 2016 Trad T in Light Burst in early January of 2016. Suffice it to say, it blew me away and I love it to bits. This was undoubtedly the closest I could get within my budget (well, a bit beyond actually) to a proper old-fashioned LP and it was exactly what I wanted! Love that neck!

She’s had the usual cosmetic upgrades since then (top hats, pointers, tall pup rings, blank TRC, etc) and a light-weight aluminium tailpiece on steel studs. At some point, I *will* get around to changing the bridge to something like Faber iNserts and a nickel ABR. I like the 57 pups so they’re staying for now. I might change the covers to nickel but then I might just go for Bare Knuckles or Mojos or Beast Buckers and maybe go the full-hog on ‘50s wiring and bumble bees...

Since then, the bug continues to bite and I’ve also managed to acquire one of those other LPs that I previously ogled but couldn’t afford (the joys of a good pre-owned Lester!).

The ‘16 Trad remains something truly special though and there’s no chance it’ll ever be leaving the stable! Still have her, and if it remains within my control - I always will!
My '13 Traditional Pro II. 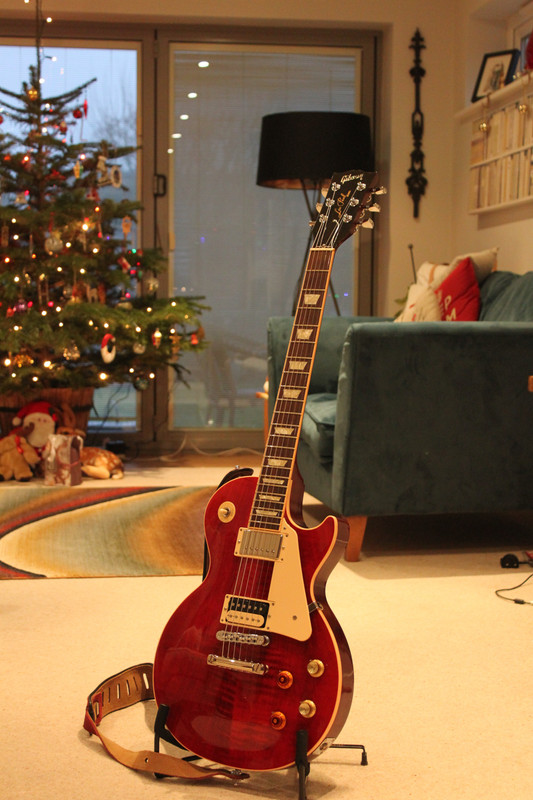 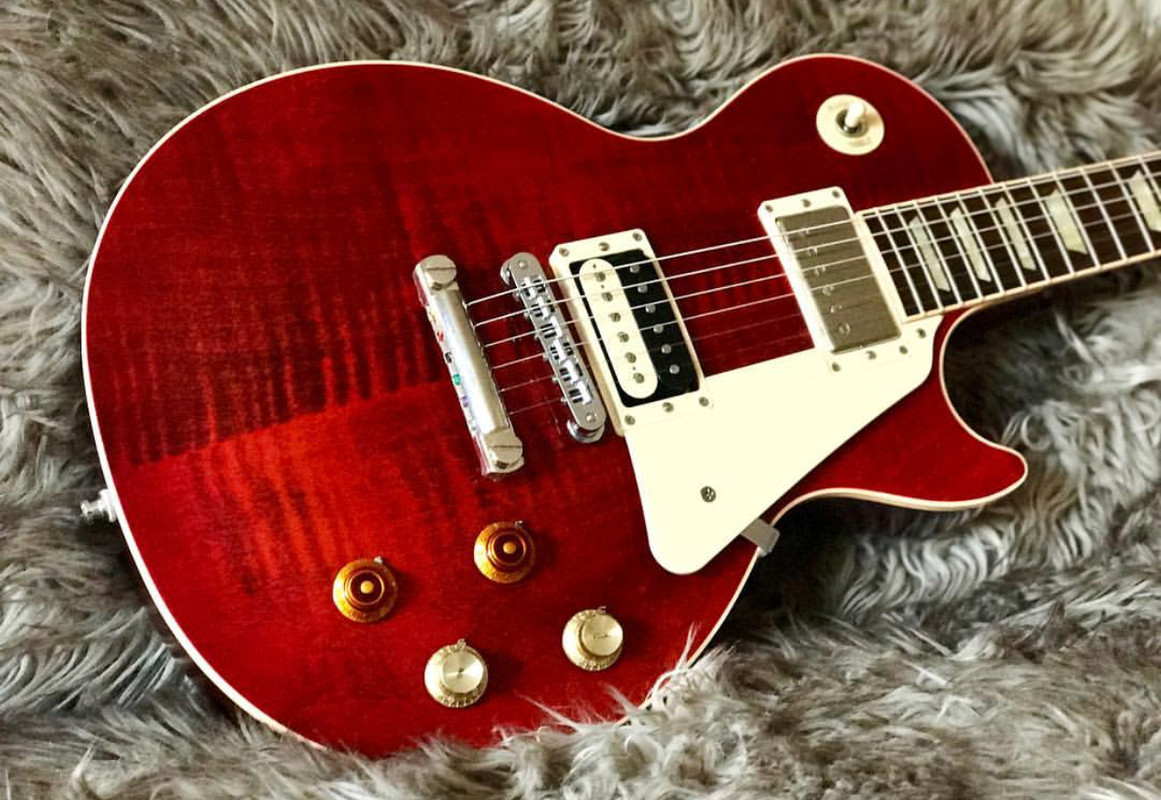 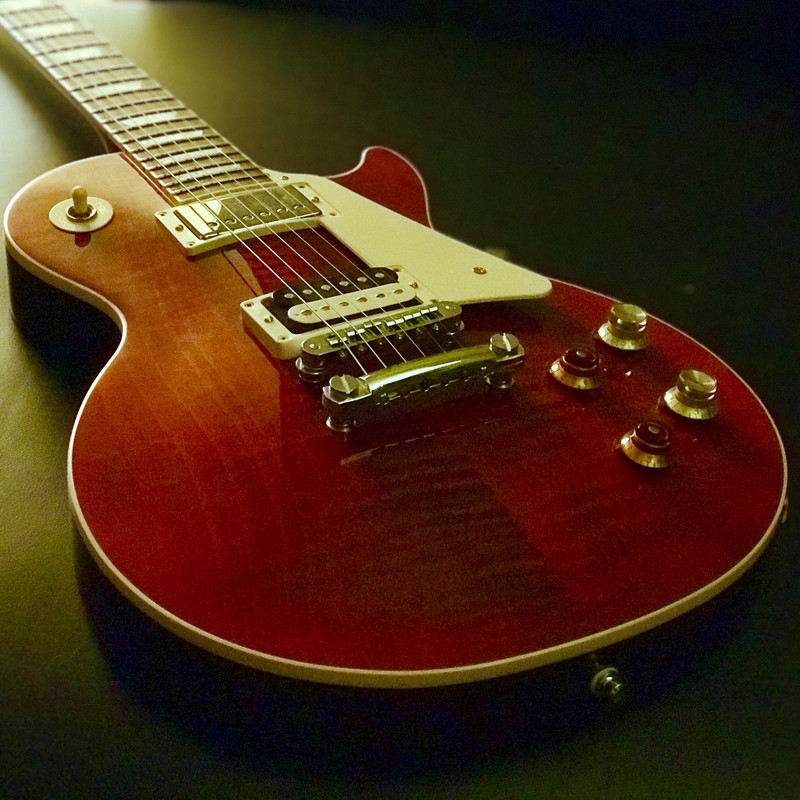 I'm not sure that photo is of an R8, looks like the traditional pro 3T, plain top, honey burst. I know because I had one . Does it have the push / pull DB boost on one of the tone pots and a 9v battery compartment on the back ?

My first was a 2014 studio pro desert burst, I bought it in a panic in 2015 because it was the year robo-tuners, zero nut fret, and wider necks were forced on everyone and I was terrified that would be the status quo of Gibsons forever

I eventually sold it and upgraded to a fancier Gibson.

Pesh said:
Still have her, and if it remains within my control - I always will!
My '13 Traditional Pro II.

That top and paint job has some character, very cool

zaqintosh said:
I'm not sure that photo is of an R8, looks like the traditional pro 3T, plain top, honey burst. I know because I had one . Does it have the push / pull DB boost on one of the tone pots and a 9v battery compartment on the back ?
Click to expand...

Dude you have no clue.

That is a Maple Burst R8. It's got a Maple leaf on the back Special Canadian run for Long & Mcquade.