So I'm reading a lot about the sheer quality of the high end Tokai LPs and as someone who's currently looking for a LP I'm increasingly tempted to consider a Tokai. I'm seeing comments that their quality is approaching that of Gibsons Custom Shop. So to that end, I'm looking for comments and opinions on this, especially from anyone who has owned / played both. Cheers guys

I have a 2013 Gibson LP Traditional and it is a real nice guitar. I also have a 2012 Bacchus Classic and it is just as nice and probably a little nicer in some ways. I find myself playing the Bacchus quite a bit more than the Gibson. There are some real nice MIJ LP style guitars out there. Navigator, Momose, Tokai, Bacchus and others---

Check out the Tokais with the Gibsons, but look also at the other MIJs as scosmith suggested. check out Crews Maniac Sound as well.
W

I've never owned a Gibson. I've played a few Gibsons that were utter stunners, like my old roommate's dad's '79 silverburst Custom and an aughts ('06 or '07 maybe) custom shop Black Beauty. I've also played more than a few that were unremarkable, and a handful that were downright cruddy. I have two '79 Tokais, an LS-60 (tobacco burst plaintop with light flame) and an LC-100 (wine red, all-mahogany) which I bought in 2013 and 2014 respectively, and I've never felt the urge to so much as pick up a Gibson Les Paul in a store since then. You can take that however you like.

I’m on my second Traditional. I love them, ‘57’s, big necks, and quality guitars. A Traditional would be my choice.
K

I traded a 2011 Les Paul classic custom for a crews maniac sound ktr-std,

The 2 guitars aren’t even in the same league, the crews is many levels above in my opinion

My two LP's are a 2002 Standard and a Tokai LS135Q. Bear in mind that at this point I have only had my Gibson for around a week, but with regards to build quality and attention to detail... the Tokai wins that hands down.

I'd rather have a Gibson Traditional than any Tokai copy. They're all fine, and of course vary from guitar to guitar and to some extent by year, but at the end of the day, I'll take the Gibson. Not for the branding only, but also because they are authentic, USA made, and, IMO, equal to or better than the copies.

Mmmm interesting... I have seen a Tokai Ls122 Gold Top that I'm quite interested in trying.... See pics.... But the guy, a retailer is asking £1000 for it, which tbh seems a lot to me .
I've also seen a Standard and a Traditional which look cool as well... Nice.... I had an R8 which was awesome but rarely used so I'm scaling down and freeing up some cash. Hence this search for something less expensive

£1,000 probably isn't unreasonable although I'm not familiar with the LS122; having said that mine is an LS135 so they're probably not miles apart in terms. This is my Tokai, based on '59 specs and sounds and plays as good as she looks 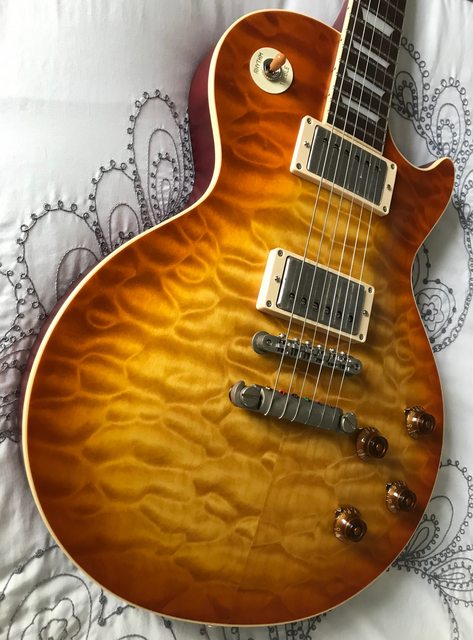 Your best option would be to play 5~6 Gibsons' and 5~6 high quality MIJ guitars and buy the one you like the best . You cant really go wrong that way.

Tokai are really poorly documented- so do your research. I have seen plenty of newer Chinese guitars advertised as Japanese. An Agile is a better option than a Chinese model. It should be pretty obvious what are Chinese.

Buy a 79-81 Tokai LS 80 or 100 and every bit as good as any Gibson from those years and a lot better than 2 traditionals I had but everyone is different.

In my opinion of Tokai's and Gibsons and Fenders, you need to spend 3X as much to get a Gibson worth the price of a given Tokai. Sometimes more. When I A/B'd my Tokai HLS-LW against my friend's G0 (and that's a nice LP), he straight up offered it in trade after playing my Tokai for 2 minutes lol. The tokai is just a better guitar, and the "The 59" pickups are the best PAF sounding pickups I've personally played or heard other than originals in my life. And better certainly than a lot of originals.
R

Ive done exactly the same comparison. In my case it was comparing the Traditional 2016/18/19 to various MIJ Tokais (186/196/360/390). Also recently looked at the original collection as a comparison.

Here is what I've found:

3. Better Hardware. The Gotoh kluson style tuners on the Tokais are better quality than the Gibson branded klusons.

The Gotoh ABR-1 bridge is excellent The ABR-1 bridge sits snug on its posts, it doesnt fall out when turned uptside down and doesn't move or rattle. The saddles are notched just deep enough so that the strings don't pop out. Gibsons tend to have shallow saddle notches.

4. Electronics and wiring. The wiring used in Tokais is far better quality than the flimsy 4 core wire that Gibson uses with the centre plate. The wire cores are so thin that they often break. Tokais use genuine CTS pots and switchcraft toggle switches, which are an improvement to the Gibson branded equivalents.

The Gibson USAs do have some advantages over the Tokais as well, such:

Then there is also the 1-1.5K price difference. Goodluck and let us know which way you go!

I went with the Tokai Ls122 Gold Top