OK. We know that the ugliest knobs in Gibson history are safely tucked away somewhere. Probably the HIP engraved tailpiece too. I'll tell You what though. The ugliest Knobs in Gibson history are a collector's item. I know, because I had to pull a last-second eBay maneuver yesterday to land a mint set of knobs for $54 plus Shipping, so basically those unwanted knobs are worth $15 each. Not bad.
I have a Peaceful Orange Peace, and I will probably have a Green one too before I'm done. Some of us with early ones have hand wiring exactly like the Slash wiring, and to me that's a real plus. They will all have PCB's soon except for Customs, and the hand-wiring will probably be a healthy up charge.
Anyway, let's start a club, or support group for those of us with the groovy, hip, Haight Ashbury Bell-Bottomed Les Pauls.
Hello. My name's ajay, and I'm an addict for Orange Plus Topped Les Pauls. Every time that I plug it in, I'm rewarded with the sweetest tone, and now that my guitar guy messed with the Truss Rod for five minutes, the action is absolutely perfect for me. Gibson took it upon themselves to install pickguards on all of them. I don't like pickguards, so the dent on mine from their installer putting it on too tight is going to need a drip-lacquer repair job. I can live with that too, because the tone on mine is just right for me.
Yes, I'm addicted. And I'm shopping for the right Green Top already. I think these PEACE guitars are going to be multiplying. And I can't stop myself.

My name is Ben and I'm an addict. Here is the subject of my addiction: 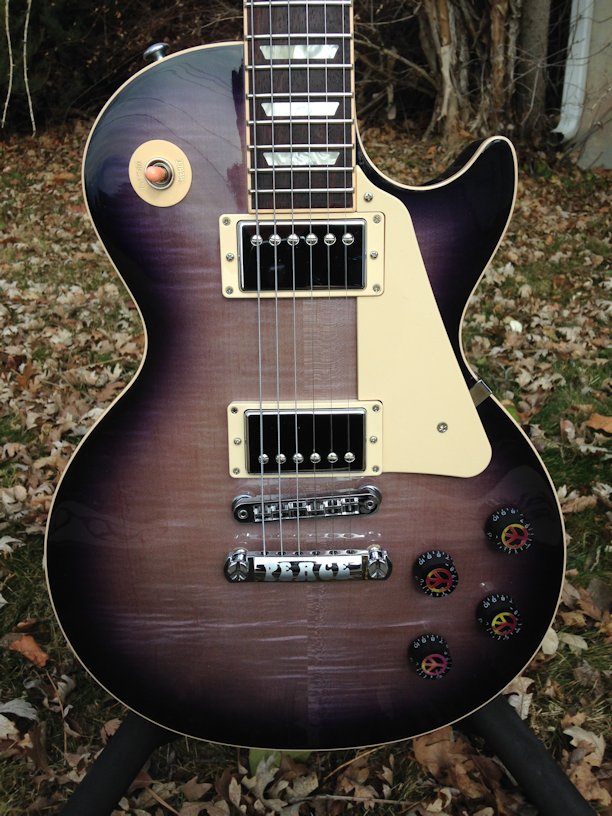 It's Placid. It's Purple. It is Peace.

Nice Guitars, the Peace model's have such great colors as well as some great features.

It was a toss up for me between the Mellow Out Green and the Harmonious Sunset. Since there were no Mellow Out Green ones available at Sweetwater at the time of my purchase, that made it easier on my decision. ( Thank goodness for that, since it is hard enough on which Les Paul model to get let alone what color to boot. And then there is which serial number you want for the right flamed top you think looks best. This is all enough to drive you crazy.

Here is my Les Paul Peace, which gives me good peace of mind for getting a Les Paul without all the new 2015 changes. I swapped out the MinETune for some nice Keystone Grover tuners as well as a new truss rod cover. Oh... and I totally love the 120th Anniversary inlay on the 2014 Les Pauls. 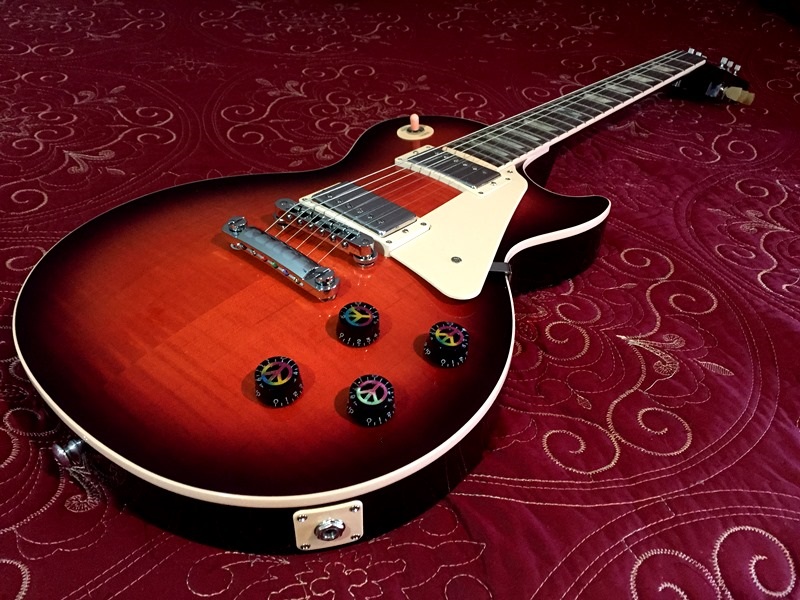 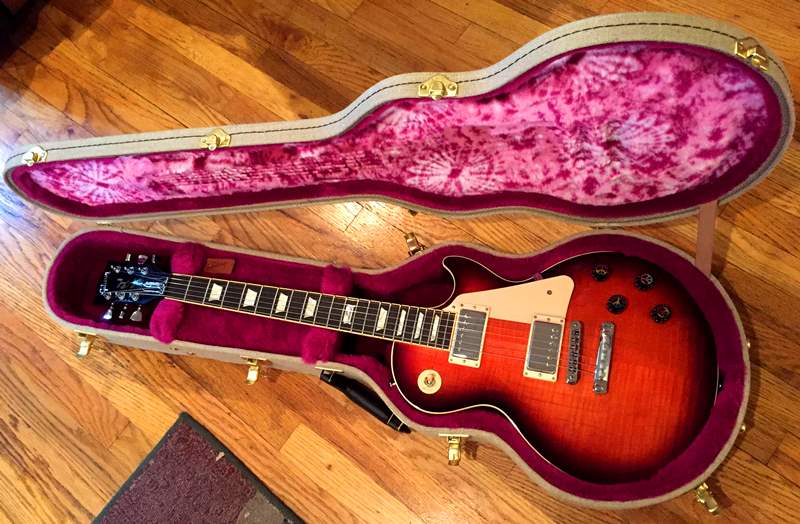 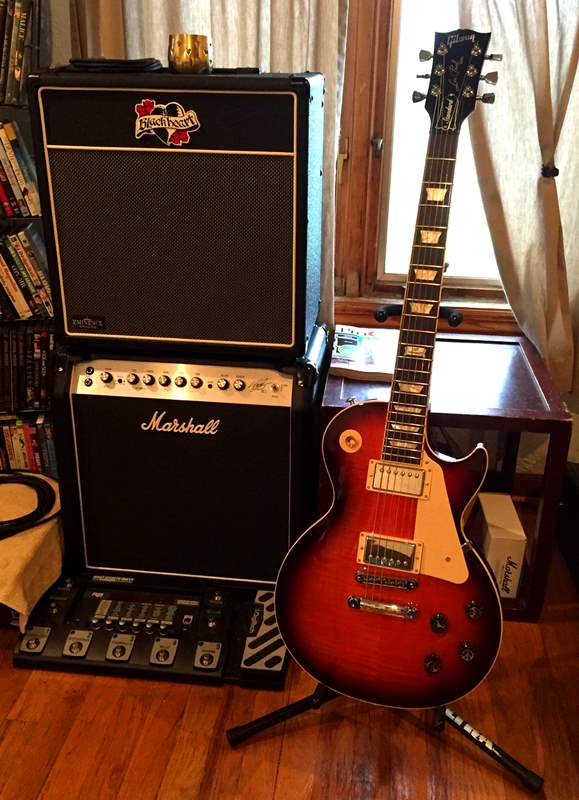 I waffled over a purple or sunset peace guitar for s while...kinda glad I did because then the Bill Kelliher Halcyon model came out and it was perfect for what I wanted (except for the pickups)...
I am still on the fence for a peace model (I know I'd be removing the tuner and the peace logo-ed stuff).

Matt_Krush said:
I waffled over a purple or sunset peace guitar for s while...kinda glad I did because then the Bill Kelliher Halcyon model came out and it was perfect for what I wanted (except for the pickups)...
I am still on the fence for a peace model (I know I'd be removing the tuner and the peace logo-ed stuff).
Click to expand...

I was looking at the Halcyon myself a couple months ago, but very glad I got the Peace, because it is a fantastic guitar. I took off the MinEtune and ugly truss rod cover. lol
H

Thanks, these cases are pretty nice and have a very different feel to them than the Brown cases. The Les Paul Peace is a lot heavier guitar than my Les Paul Studio Pro, but the brown case is a heavier case because the Les Paul Studio Pro feels heavier when in the case. I am thinking that the Brown Case is built a bit better than the Peace Case, but there both still nice. Man I love that green!!!

You are sure right, the peace is all gone from that one.

I guess the peace guitars are pretty special, since not many people here seem to have them.

Hello fellow PEACE guys! Like You, I really love my PEACE Lester. Mine came to me barely recognizable as a PEACE Model. The only things that I had to go on were the tailpiece studs with Peace signs, and the color. The guy that I traded guitars with had sold everything, and he kept the case. He kept the Min-E-Tune too. I'm going to buy one when the market hits supply=demand.
I don't know what happened to my PO PEACE The Gibson website states that the Peaceful Orange is supposed to be a Plain Top, but they forgot to put the Plain Top on mine. I assume that they figured that a certain percentage of the Maple Tops we're going to be less-figured, so they wanted to leave themselves a place to use them in the production of the PEACE Model. If You look at the 2014 PEACE on Gibson's Website, the PEACEFUL ORANGE example did indeed have a top with no figuring at all. Maybe they thought that You would lose that Peaceful Easy Feelin' if Your top had beautiful figuring on the top. I'm gland that mine went from mild to wild. And I AM at peace when I am playing it.
I now have the Peace tailpiece and another set of PEACE tailpice studs, the Knobs with Peace signs, the Case with the groovy tie dye interior, and the Truss Rod Wrench. I feel pretty good about restoring my PEACEFUL ORANGE PEACE MODEL to its rightful condition.
And I really like the 120th inlay too. At least they picked a really good looking chunk of Pearl.
One other thing that makes it worth putting my kit together is that hand wiring. My guitar's Serial Number is 1400072XX. I was talking to a guy that has one in the low 8000's, and his is hand-wired too
. It just makes it seem like a groovy, hip lost guitar that found its home. Thanks for signing on everybody! Let's make a sounding board for the under-appreciated jewels of the Les Paul World.
Has anyone had any problems with their PEACE? So far, mine is great now that my guitar guy got the strings off of the frets. The previous owner was going on and on about what a great set-up it had, and it was so low it was all but unplayable. If You wanted, You could just about bend the strings all the way around the neck! One thing that Gibson IS doing right these days is the robotic PLEK fretwork. The first guy had the action so low that I couldn't ring the harmonics without touching the strings to the frets. But even though the action was that low, there was zero fret buzz. I think that Gibson should get some credit for investing heavily in PLEK technology.
One thing that I have noticed about this guitar. It always wants to work out more and more Grateful Dead tunes and Jerry Garcia licks. No complaint, because I'm a bonafide DeadHead.
Also, NICE GUITARS YOU GUYS! You picked out some beauties!
Well, here's my Peaceful Orange PEACE resting comfortably in its proper case.

By the way, SWEET guitar hsmaxim! That Green is going to be one for the ages I believe. Also, with the changes that You've made it should be one awesome Polsfuss. Whatever group Gibson had put the final decision on colors for these guitars did a fine job. They are all really cool looking. There isn't oneh color that I would kick out of my guitar room. I really do like them all. A LOT! Every one of Your guitars are really cool.
Also, I really am not a fan of the pickguard, but since Gibson decided that all of us would want a pickguard on our PEACE Models, and drilled the holes in the wrong places, I have been trying to find a pickguard that I like to cover up their damage. My first attempt is a FAIL, because although this pickguard looks good in person, it just doesn't photograph well. Since opinions are given online, that's where the voting takes place, in photographs. Does anyone here see this pickguard working against an Orange Plus Top? If it looks like crap please tell me so. I don't want to strap up an ugly Lester. If You look close The pickguard is ON in this photo. I'm looking for the Pickguard to blend into the Top.

I think your guitar looks much better without that pickguard. I can't see the damage you are referring to, and I doubt anyone else can, either. I would just leave it without pickguard.

If you MUST have a pickguard, however, consider a clear one. A clear pickguard will still require the same screws and bracket and will likely cover up the damage that is bugging you.

goldsparkletop said:
I think your guitar looks much better without that pickguard. I can't see the damage you are referring to, and I doubt anyone else can, either. I would just leave it without pickguard.
Click to expand...

I agree, either leave the pick guard off or put the cream one back on. But just my opinion, whatever floats your boat. Can you post a pic of the damage caused by the pick guard?

rjwilson37 said:
Thanks, these cases are pretty nice and have a very different feel to them than the Brown cases. The Les Paul Peace is a lot heavier guitar than my Les Paul Studio Pro, but the brown case is a heavier case because the Les Paul Studio Pro feels heavier when in the case. I am thinking that the Brown Case is built a bit better than the Peace Case, but there both still nice. 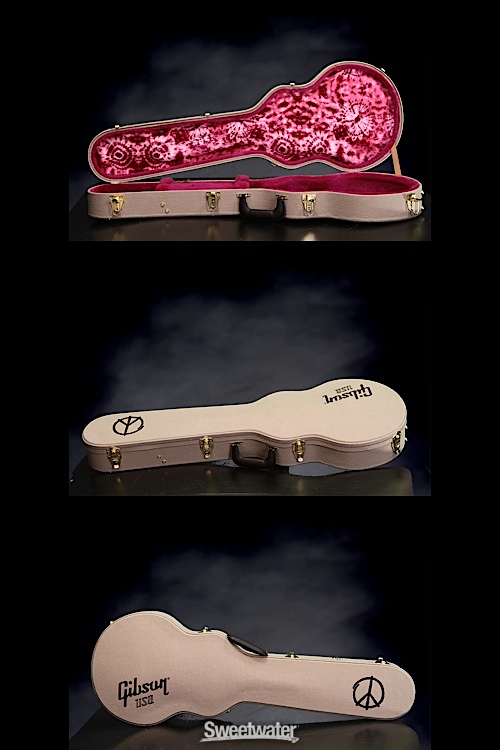 I think those cases are damn nice.
F

I had no idea about these Les Pauls but they seem pretty nice/unique. Like that case a lot too!

I'll take Your advice on the pickguard. So far NO ONE has liked it! I guess a good collector's item. I WILL TAKE A PICK OF THE DIVOT TOMORROW.Most Les Paul's with the pickguard installed have the mark.

Are You guys Jammin' on those Woodstock Lesters or collecting them? Mine is getting around two hour a day trouncing, but I just can't get any relic mojo goin' on! I saw where one guy was putting his in a freezer, but that seems a little bit extreme. Actually, I would prefer that my Peace never acquired cracks all over the finish. I kind of like the beauty that the Gibson team layed down. Do any of You guys intend to give Your Peace Models the Tom Murphy treatment? I can maybe see where Nitro cracks are cool, but I don't understand grinding the finish off on the back or on the side where Your arm rests.
I had an Advanced Jumbo that I traded for my Peace, and I put a polishing cloth under my arm where it rested on the top. That may seem extreme, but there was not so much as a smudge where my arm rested. Now that I'm old, I don't think that I have enough time left to relic my guitar the natural way, so I guess mine is just going to have to grow old gracefully. Also, if anyone tries to talk You into changing out Your pots, Gibson pots are waaaay better than CTS, and all four pots in Your Peace are 500K, so leave 'email alone. You can do no better than what You already have (unless You want to lose the PCB if You have one!)