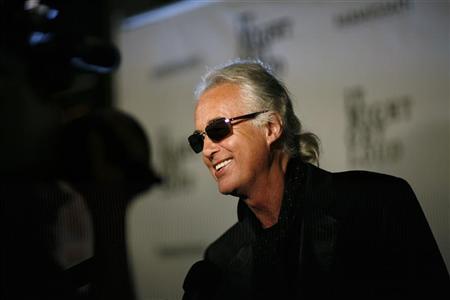 Reuters) - British rockers Led Zeppelin will release a concert film based on their 2007 charity performance in London that hits cinemas on October 17, the band said on Thursday.

The film, called "Celebration Day" and directed by Dick Carruthers, was taken from the long-awaited reunion of one of rock's most successful acts.

The theatrical release will be across 1,500 screens in more than 40 territories, followed by an audio and video release on November 19.

There will be premieres in London, Los Angeles, New York and other major cities before the theatrical release, raising the possibility of seeing the three surviving band members on the same red carpet, if not the same stage.

The band broke up in 1980 after the death of their drummer John Bonham, but despite repeated calls from millions of fans to get back together to tour and record, reunions have been fleeting and, by their own admission, unsatisfactory.

It was the first headline show by the band in 27 years, and according to Cineworld, the cinema chain which will screen the movie in Britain, it was the most over-subscribed gig in history after more than 20 million people applied for 18,000 tickets.

"It's a unique opportunity to savour what is likely to be Led Zeppelin's final performance," Cineworld said.

The band, one of rock's biggest acts with global album sales estimated at up to 300 million, played 16 songs on the night including hits like "Whole Lotta Love", "Kashmir" and "Stairway to Heaven".

The poster promoting the film features a cartoon of a zeppelin airship against a red sky above the Houses of Parliament, reminiscent of the artwork on the band's 2007 compilation album "Mothership".

Following is the track listing of the upcoming film, which will last just over two hours.

7. Nobody's Fault But Mine

9. Since I've Been Loving You

12. The Song Remains The Same

You're a little late.

ho hum...milking it for all it is worth

My brother attended the actual gig, courtesy of Microsoft (the b*stard!). At least I will now get to see what he was raving about afterwards.

Just heard about this today. Super pumped. I just wish they'd show it at a theater closer than 2.5 hours away from me.

nick1962 said:
My brother attended the actual gig, courtesy of Microsoft (the b*stard!). At least I will now get to see what he was raving about afterwards.
Click to expand...

No offense, but now I want to kick your bother's arse.

nick1962 said:
My brother attended the actual gig, courtesy of Microsoft (the b*stard!). At least I will now get to see what he was raving about afterwards.
Click to expand...

I tried like hell to go, had everybody I know that has an email address enter the lottery for me but no soap.
You must log in or register to reply here.

Led Zeppelin to appear on Letterman
2