(if this is old news for some, then forgive me for the redundancy)

In many discussions regarding switching between Kluson and Grover tuners on Gibsons, there is still some debate as to whether the bottom rear set screw is in the same position for both tuners.

Well, after switching them myself several times...AND after directly comparing the technical drawings at scale, the answer to whether or not they line up the same is.....

Based on just the technical measurements and comparisons at 1:1 scale (each tuner was scaled to the same 1inch-to-1inch reference) as seen in the pic below, the screw holes don't line up exact, with the Grovers being slightly lower. This is what I noticed when I switched them out, with the Grover being maybe half the hole's diameter lower.

BUT...that's with the original-style narrow-shaft vintage Kluson types. Depending the reaming of the hole to widen it for the Grovers, it could offer enough play to make up for that difference, so it would seem that the screw is a direct replacement in the same position. However, if you're replacing the Kluson-types that have a wider peg hole and hex bushing to begin with like.... 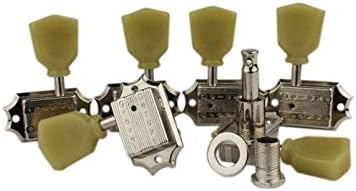 .....then since the peg holes are already widened and precisely concentric with what would have been Vintage Klusons, and the newer Grovers will just slip in, you might notice that the required bottom set screw hole will be slightly lower, so you may have to shim/dowel the hole and/or widen it down a bit, or maybe tilt the set screw up a bit. But then those Grover Deluxe Kluson types have slightly different specs with the screw holes from vintage Klusons as well, so that may also contribute. This video (if you can endure the 'camerawork') goes into etc whole reaming thing I mentioned: