The chaos was reportedly sparked by a dispute over a call. The video shows some parents in the stands desperately trying to stop the chaos as the field is overrun with cursing, brawling parents yelling things like “piece of shit” and “sorry ass excuse” between punches. The shaken parent who filmed the fracas can be heard at one point exclaiming, “This is a fucking kids’ game! Where’s my fucking kid?” 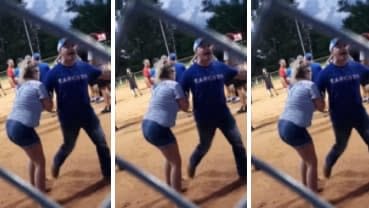 via Facebook A knock-down, drag-out battle royale between more than a dozen parents and coaches at a kids’ Little League game could result in criminal charges against some of those involved, the Lexington Herald-Leader reported. Video of the brawl in Stanton, Kentucky posted to Facebook showed...

And this is out of the ordinary…..how?

This is at a T-ball game?

The kids have more maturity than the parents do.

I surrender.
I'm going to join the masses.
Gonna drive however I want, pee on the sidewalk.

Wasn't this was a South Park episode?

I only wish that I was shocked.

I know when I live vicariously through other people I always think to myself what is the most boorish and embarrassing thing I can do.

And then I just do that.

well, he was safe.

Bullshit ya peece a shit!

Destani Renaye Knox can’t even “what”? Think of words?

Who said:
“Can’t even” is code for “I repeat the same shit I read on FB all day and you’re supposed to think I’m original, interesting, humorous, and inciteful, but actually I’m an empty-headed dickstain”.

I’m pretty sure “no words” means the same thing.
Click to expand...

I had parents. These are not parents.

These are breeders gone wild.

Who said:
“Can’t even” is code for “I repeat the same shit I read on FB all day and you’re supposed to think I’m original, interesting, humorous, and inciteful, but actually I’m an empty-headed dickstain”.

I’m pretty sure “no words” means the same thing.
Click to expand... pnuggett said:
Bullshit ya peece a shit!
Click to expand...

I think this sort of BS happens everywhere. During the years I coached little league and Pop Warner, I got to witness incredible stupidity from parents, coaches and kids. It sucks and I don’t remember any of it happening back when I was a kid in the 60’s or early 70’s.

Yeah, no...if anyone would have tried that shit in the late '60s when I was in little league, they would have been run out of town.

Tone Deaf Jr. is/was a real good hockey player. He and the boys loved playing at the rinks where they served alcohol because the parent fights were the best, there.

Rolling up to the rink (our home rink) for a mite (8 and under game) game, there were multiple police cruisers. It was about 8:00am. Apparently, a mom had gone berserk during a pee wee (12 and under) game and attacked a kid on the opposing team.

Rolled up to our first ever travel game...multiple police cruisers in the lot. A parent had assaulted a referee when he came off the ice. He fell (with skates on) broke his ankle and the parent went to jail.
Last edited: Jun 16, 2021
You must log in or register to reply here.
Share:
Facebook Twitter Reddit Pinterest Tumblr WhatsApp Email Share Link