Internet trolls could face up to two years in jail under new laws, Justice Secretary Chris Grayling has said.

He told the Mail on Sunday quadrupling the current maximum six-month term showed his determination to "take a stand against a baying cyber-mob".

The plan has been announced days after TV presenter Chloe Madeley suffered online abuse, which Mr Grayling described as "crude and degrading".

Magistrates could pass serious cases on to crown courts under the new measures.

Mr Grayling told the newspaper: "These internet trolls are cowards who are poisoning our national life.

"No-one would permit such venom in person, so there should be no place for it on social media. That is why we are determined to quadruple the current six-month sentence."

Miss Madeley received threats after defending her mother Judy Finnigan's comments on a rape committed by footballer Ched Evans, which she said was "non-violent" and did not cause "bodily harm".

Richard Madeley has said "prosecution awaits" those who sent "sick rape threats" to his daughter. 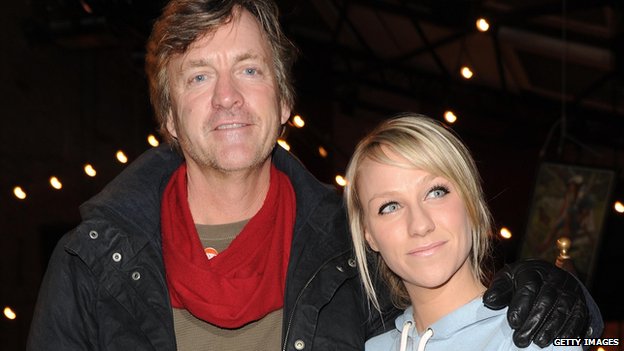 The justice secretary said: "As the terrible case of Chloe Madeley showed last week, people are being abused online in the most crude and degrading fashion.

"This is a law to combat cruelty - and marks our determination to take a stand against a baying cyber-mob.

"We must send out a clear message: if you troll you risk being behind bars for two years."

Miss Madeley told the Mail on Sunday she agreed with the new proposals to update the 10-year-old law.
'Online terrorism'

"It needs to be accepted that physical threats should not fall under the 'freedom of speech' umbrella," she said.

Those who subject others to sexually offensive, verbally abusive or threatening material online are currently prosecuted in magistrates' courts under the Malicious Communications Act, with a maximum prison sentence of six months.

More serious cases could go to crown court under the proposals, where the maximum sentence would be extended.

The law change is to be made as an amendment to the Criminal Justice and Courts Bill going through Parliament.

The new measures would also give police more time to collect enough evidence to enable successful prosecutions to be brought.

.. well in the US threatening someone is already illegal, not sure all what this UK law covers or makes a crime .. I understand there is a difference in what can be said as regards free speech over yonder .. but not the specifics ..

The internet is hard, some people don't know how to look away.

The freedom of speech umbrella has been abused for a long time. It's sickening the verbal abuse that has been protected but it.
P

Meanwhile, Section 5 of the same act makes it an offense to:
"use threatening, abusive words or behaviour, or disorderly behaviour likely to cause harassment, alarm or distress."

While threatening someone should, obviously, be a crime to my mind that law is far too broad because "causing distress" can encompass damned near anything.

There have been recent cases in which people have been jailed for making racist comments or posting racist tweets. Now I am not in any way defending racism, but being an ignorant shit shouldn't be a criminal offense, at least not in any kind of free society.

I think the main thing is that Judges need to use discretion to work out where someone has overstepped the line between stupid or freedom of speech & being totally abhorrent.

Unfortunately, many Judges would need the wisdom of Solomon to make the correct / moral / just decision for many cases. It is not unusual to see sentences handed out that do not fit the crime; i.e. often way under or way over.

We live on a crazy / stupid Planet.

HenryHill said:
Ignorance of the law is no excuse, as is just being ignorant is no excuse.
Click to expand...

But being ignorant shouldn't be a criminal offense.

You smell like a wet dog and your toes look funny.

I guess I'll see you guys in 2 years.

I have concern over the liberal use of a term as baited as, "online terrorism"

Online bullying, sure,...but keep that T word out of it. It gets used a little too casually these days imo.

Malikon said:
I have concern over the liberal use of a term as baited as, "online terrorism"

Online bullying, sure,...but keep that T word out of it. It gets used a little too casually these days imo.
Click to expand...

In all fairness, Britain does have a problem with home grown Muslim extremism.

It's All About the Maos

England has for-profit prisons too?

Interesting proposal, but so many potential grey areas! My thoughts from reading the article are thst there is an obvious difference (that isn't a great area) of presenting yourself online transparently, (some - or all of the following... real photo of yourself, contact details, photos, info of character etc) and wishing to question/criticise something/someone - I don't see anything wrong with that. But being a coward and hiding - i.e using anonymity to vent all kinds of vitriol including threats of rape, torture etc, then just as if you said it someone face to face, it should be treated the same in my view.

colchar said:
While threatening someone should, obviously, be a crime to my mind that law is far too broad because "causing distress" can encompass damned near anything.

... but being an ignorant shit shouldn't be a criminal offense, at least not in any kind of free society.
Click to expand...

Exactly. What is funny to some of us, would "cause stress" for some other neurotic control freak who should have minded their own business. The broadness of the "law" is ridiculous.

Free speech is free speech. No one has the "right" to be forever shielded from MAYBE being offended. Some people LIVE to be offended and stressed.

colchar said:
In all fairness, Britain does have a problem with home grown Muslim extremism.
Click to expand...

doesn't have anything to do with cyber bullying.

The use of the word terrorism implies someone cyber bullying could be labeled a terrorist,..and once that label is applied it's pretty easy to black bag and disappear you.

...slippery slope and all.

Off to Gitmo where you'll be held indefinitely without charge because you told someone online to go f**k themselves?

Sounds ridiculous I know, but ridiculous seems to be the order of the day.

Remember there's still folks in Gitmo and Abu Ghraib that still haven't been charged with anything who've been held for over 10 years. Because they're labeled as terrorists.

Once that T word is used,...bad ju ju, suspension of rights, and away you go
You must log in or register to reply here.

First person to be convicted under Florida’s 'Red Flag’ firearms law faces up to 5 years in prison.
18 19 20

Judge: Poker is not gambling under federal law
3 4 5

Cyberbullying Law: Butthurt Police Coming Soon To An Interweb Near You
3 4 5