To open up my (newly acquired) R8 and find it has modern wiring.
So much for playing authentically.

Its a 2003 so I'm sure they have fixed that by now right? Probably not.

Then I figure out the Bumble Bees are fake? Sorry late to the party.

Damn just got through rewiring and replacing the guts in my 2020 Standard 50s as it wasn't wired 50s wiring either.
Give me an FN break. There were bursts that were wired „modern“ back in the day, too. But you are right, the so called 50s wiring sounds better.

There were many "Bumble bees" fakes in many Gibson R's, straight from the factory. 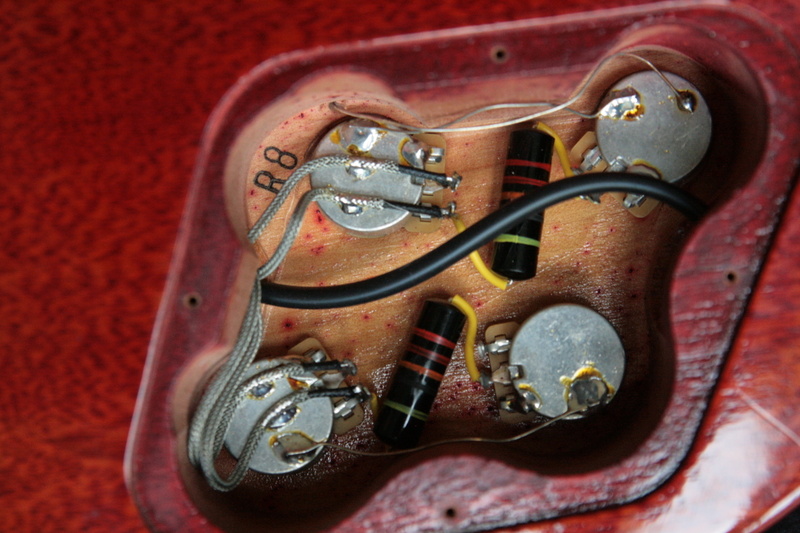 The Black Beauty R7's were short tenon for a while in the 90's too.
Its all been a gradual move toward more accurate specs - taking time to sell everyone on the tiny minor improvements along the way

I mean it took until last year or the year before to get the logo anywhere near accurate.....and the position on the headstock for Goldtops has never been year-accurate to this day.

Red Planet said:
Then I figure out the Bumble Bees are fake? Sorry late to the party.
Click to expand...

I just looked this up...

ARandall said:
the logo [...] position on the headstock for Goldtops has never been year-accurate to this day.
Click to expand...

how do you know previous owner did not change the caps around to the other lug? or is this a trap and i feel right into it?

I’ll play devils advocate a bit here - how did the guitar play and sound originally (with the non-authentic wiring configuration)?

Bobby Mahogany said:
There were many "Bumble bees" fakes in many Gibson R's, straight from the factory.

How to know if fake or not?

You could've been Dazed and Confused

Tommy71 said:
How to know if fake or not?
Click to expand...

From that period you'll also have linear taper pots, brass stoptail posts etc. 'Authentic' has been an ongoing, gradual process through the Historic line. While misleading or simply annoying to the consumer it also created an industry for replacement hardware/parts alongside pickups. Everyone can have what suits them best. Some are ok with modern wiring/linear pots for eg, others of us are not. As for Gibson, they've maintained buyer interest over the years and we're still here talking about it. Enjoy your R8.

Your cap legs look plenty long enough to move them to the middle lug on the volume pots. Yeah, they are still on a different lug on the tone pots, but will then do what you want soundwise.

You could also source some NOS bees or get the Luxe ones.

JMP said:
I’ll play devils advocate a bit here - how did the guitar play and sound originally (with the non-authentic wiring configuration)?
Click to expand...

It sucked as soon as I found out.

Brek said:
how do you know previous owner did not change the caps around to the other lug? or is this a trap and i feel right into it?
Click to expand...

Previous owner never took it out of the case after he purchased it. There was another owner prior so its possible but I doubt it. It looks untouched.

I'm not a true believer in 50s wiring. I did that for about 15 years and It has it's advantages, and it's disadvantages. I've gone back to modern wiring (with quality measured pots and caps).

FWIW, my 2K5 R8 had modern wiring and I would never have touched it. Sonic Orgasm right out of the case.

Well, you have to remember it's from 2003, almost 20 years ago, and the first year of the Custom Shop. They didn't have everything perfect and 100% accurately authentic right out of the gate. Why do you think the True Historic line in 2015-2016 got so much buzz and commanded higher prices? Because every year since the CS was established, there's always a new improvement, or they decide to make one aspect more accurate to 50s models, to make the next year's models feel fresher. But I think your statement that the sound "sucked as soon as I found out" kind of says it all (I assume that was a joke, but just in case...) - if you weren't a vintage purist and didn't really care how authentic the caps were, would you have ever really noticed? I know personally I've had the same wiring in my 2003 R7 since I bought it new that year. Frankly, it sounds and plays so good, I really don't care how authentic it is. But I totally understand and respect the desire for accuracy, I just wouldn't publicly start shitting on Gibson for a mistake they made 18 years ago (and continued to make until 2009). I'm curious to hear/read your description of how the tone improves when you get around to replacing them (and I'm not being sarcastic, I am genuinely curious).

I'm not buying another new Gibson after my bad experience with my recently purchased 2020 Standard 50s (purchased new in 2021). No 50s wiring (I broke a lug trying to change it the cap legs were cut extremely too short), very little usability with the factory pots and caps installed. After replacing everything there was a world of difference in functionality. It doesn't make sense to buy new then start replacing everything. Its better to buy used and replace components. I made some assumptions when I purchased the Standard but I will not be doing that again. There are many many people that do not know what components come in what Gibson models as evidenced by my many threads with no answers for basic questions.

Fast forward to the R8 it plays and sounds amazing but it has similar issues as the Standard did with getting usage out of the tone and volume controls. I ordered the .015 and .033 Greeny Meanies from Tonemanguitar and will try that first, swapping to the 50s wiring then. I do not want to get my Standard and R8 sounding the same but I do like to use my volume and tone controls a lot.

I wasn't aware of the pot tapers so that is now a possibility as well. Its difficult for me to describe the symptoms with 50s Standard factory wiring. Sound would turn to mud when reducing the volume controls, bridge pickup was so brittle and harsh and using the tone control to tame it yielded more flavors of harsh tones (it's like the tone control was not functioning properly).

On the 50s Standard I finally got frustrated and ripped everything out. I replaced the pickups, pickup selector switch, pots, caps, all wire, and jack. All electronics were changed in the guitar. I'm extremely happy with how it sounds and plays now, the controls are much more functional. With the R8 I'm going to try a little at a time to keep from replacing too much in the guitar. I'd like to keep it as stock as possible though definitely replacing the caps (while changing cap values) and going to 50s wiring for sure first. Before and after on the LP Standard 50s.

So I was kind of thinking that you had to pay up if you wanted better components but apparently that isn't true.
Last edited: Sep 21, 2021
You must log in or register to reply here.

To bee, or not to bee